On September 11, the USDA closed applications (except in limited circumstances) for the Coronavirus Food Assistance Program (CFAP). This program was intended to compensate farmers for market losses concurrent to the ongoing coronavirus pandemic. USDA projected making $16 billion in CFAP payments. In a previous farmdoc daily article (September 3, 2020), we suggested actual CFAP payments were unlikely to reach this $16 billion amount. For corn, soybeans, and other “non-specialty” crops (to use USDA’s CFAP classification), payments were expected to be less than projected because the actual quantity eligible for payment, unpriced inventory on January 15, 2020, was less than amount estimated by USDA, 50% of 2019 production.

We consider the size and distribution of CFAP payments across commodities and states with particular attention on “unpaid” payments. We define unpaid CFAP dollars as payments projected by USDA in its initial cost-benefit analysis for this program for which it did not actually make payment as of September 14. We find actual CFAP payments are considerably less than projected for all commodities. Across all crops and livestock, CFAP payments to September 14 are $9.9 billion or 62% of the initial USDA projection. Approximately $6.1 billion in projected CFAP payments are unpaid. Proportional to projected payments, unpaid CFAP dollars are greatest for hogs and specialty crops.

In Table 1, we show projected and actual CFAP payments by commodity. We calculate unpaid payments as the difference between projected and actual payments. As projected, livestock commodities receive the bulk of CFAP dollars. Cattle producers receive $4.2 billion in CFAP payments. Dairy and hog producers are each paid approximately $1.7 billion through CFAP. For cattle, actual payments are relatively close to the projected amount. Unpaid payments, the difference between budgeted and actual, are proportionally larger for dairy and especially for hogs. 83% of CFAP dollars budgeted for cattle producers are now paid compared to 63% for dairy and 38% for hogs. Across these three commodities, CFAP dollars budgeted but unpaid are roughly similar at $0.8-1.0 billion each. 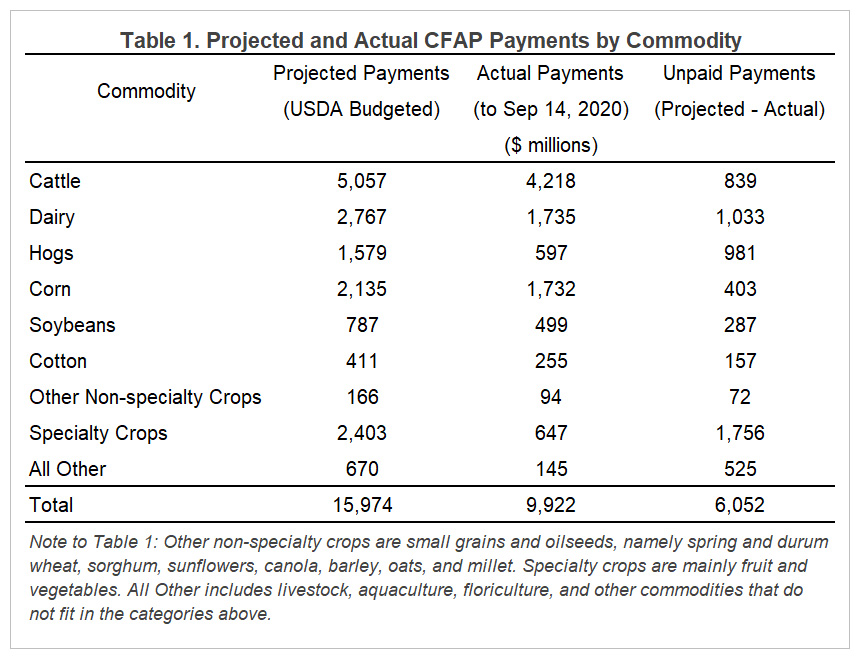 USDA has signaled additional ad hoc farm payments are forthcoming (here) as the coronavirus pandemic remains part of the market outlook for agricultural commodities.  The considerable quantity of unpaid payments authorized under CFAP may also affect forthcoming farm payments. Without speculating on the distribution of expected future payments across commodities, we note all commodity categories had significant unpaid CFAP payments as shown in the last column of Table 1. This suggests future payments are likely to be similarly broad-based, with provision for payments to a wide range of agricultural commodities.

Recent increases in major agricultural commodity prices complicate the situation. Table 2 compares futures prices from January 15, 2020, the pre-coronavirus baseline chosen by USDA for CFAP, to prices on April 15 and September 15. For CFAP, price differences between January 15 and April 15 were used in part to estimate the market impact of the coronavirus pandemic. Futures prices have generally rebounded since mid-April for most agricultural commodities except for wheat. Recall many wheat producers were ineligible for CFAP payments because wheat price declines for some major classes of wheat were too small to trigger a payment. 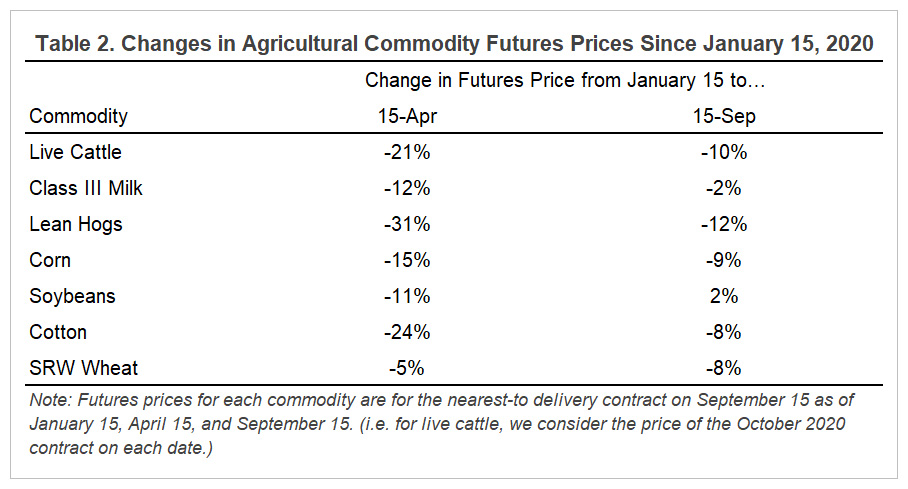 Table 2 shows that for dairy and soybeans, current prices as of September 15 are near or above January 15 levels. For other commodities, current futures prices are 8-12% below January 15 levels. Both current market conditions and unpaid CFAP payments may play a role in determining future ad hoc farm payments. 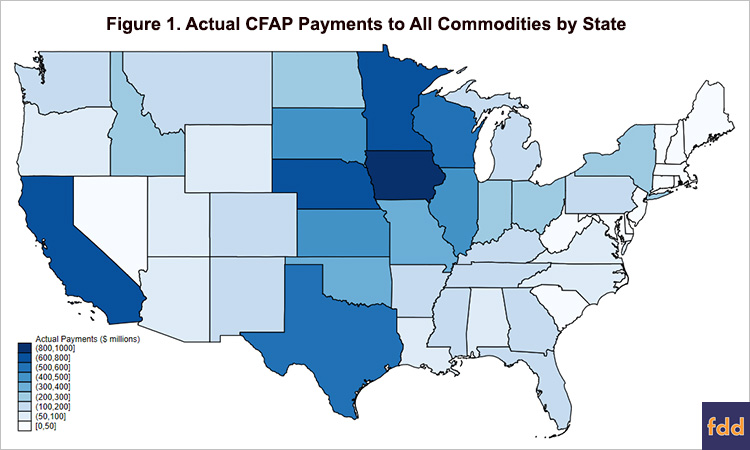 However, some regions receive relatively larger payments because they produce commodities favored by the program, especially cattle, hogs, dairy, and corn. For instance, Iowa led the nation in the value of corn and hog production in 2019. It also produces substantial quantities of cattle and other field crops. Unsurprisingly, Iowa receives the most CFAP payments, $961 million. 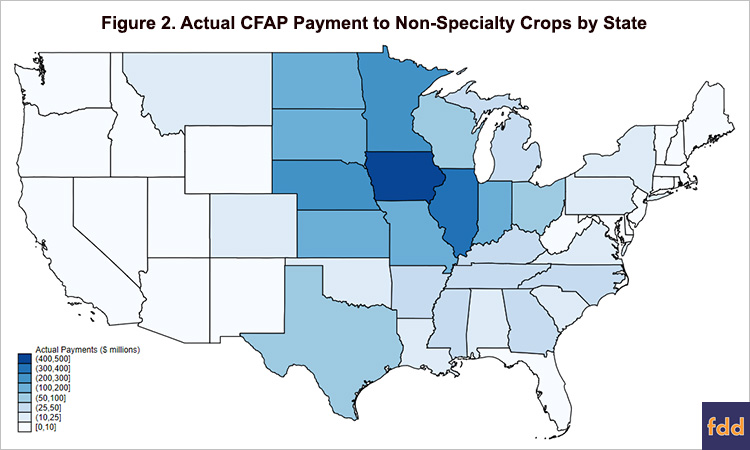 We compare actual CFAP payments shown in Figure 2 to projected payments calculated using the procedure described in USDA’s CFAP cost-benefit analysis. Projected CFAP payments are 50% of 2019 production multiplied by a given payment rate, then adjusted downward to account for the impact of payment limits. For non-specialty crops, the payment limit adjustment factor is 0.93: projected payments are 93% of (quantity x payment rate).

Figure 3 shows non-specialty crop CFAP payments by state as a percentage of the projected amount. Areas with a higher percentage have fewer unpaid CFAP payments. Broadly, actual payments are closer to budget projections in the Western Corn Belt (Wisconsin, Minnesota, Iowa, and South Dakota) than the Eastern Corn Belt (Ohio, Indiana, Illinois). The reason for this geographic disparity is not obvious; on-farm inventories of corn and soybeans tended to be larger relative to production in the Western Corn Belt in early 2020, but this association is not particularly strong. (Recall that actual CFAP payments were based on inventories not production, even though payment projections were based on production.) 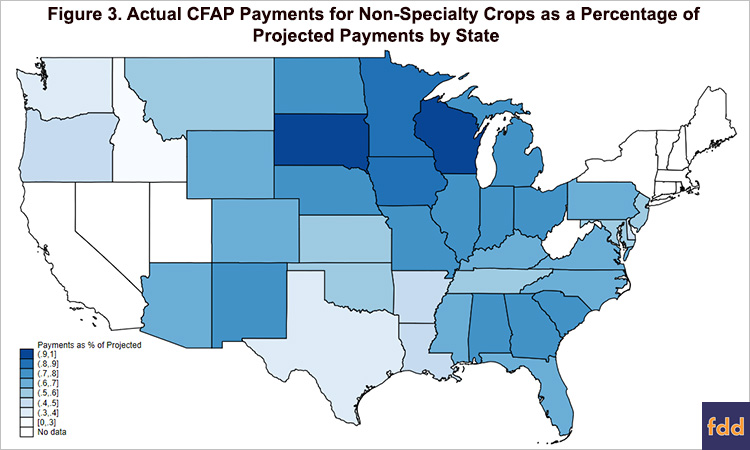 Non-specialty crop CFAP payments were particularly small relative to projected levels in Texas and the Mississippi Delta. Payments to cotton were relatively low in these states (compared to other cotton-growing states) but we do not have data on farmer-held cotton inventories to help explain why this is so. It should be noted that the CFAP application deadline was extended for areas of Texas and Louisiana affected by a recent hurricane.