This material is based upon research supported by Cooperative Agreement 58-3000-9-0047, between the United States Department of Agriculture (USDA) Economic Research Service and Kansas State University. Any opinions, conclusions, findings, or recommendations expressed in this article are those of the authors and do not necessarily reflect the view of the Economic Research Service or the USDA.

Grain storage infrastructure comes in many forms: bins, elevators, bunkers, and sheds. Storage infrastructure has at least two main uses. First, it enables farmers, commercial grain merchants, and end-users to hold commodity inventories over time. Storing grain to profit from differences in prices across time addresses variation in grain production and consumption within and across crop marketing years, the annual period defined by typical harvest timing.

Second, grain storage facilitates other activities of these firms. For example, farmers use grain storage to improve harvest logistics when commercial grain elevators are too congested or distant to allow for efficient harvest progress. For commercial grain merchants, storage infrastructure enables transformation of grain in space and form, moving grain from where it is relatively abundant and cheap to where it is relatively scarce and abundant. For example, merchants like grain elevators use storage space to facilitate efficient grain aggregation and movement to end-users, maintaining grain quality and lowering per-unit handling costs.

In this article, we review changes in US grain storage capacity across time. Over the past decade, there has been persistent talk of ‘disintermediation’ in grain markets. (See for example, Economist, December 13, 2018 and Successful Farming, July 1, 2014) Generally, disintermediation refers to a reduced role for intermediaries like grain merchants in the movement of grain from farmer to end-user. Growth in the share of storage capacity and grain inventories on farms (relative to off-farm) would provide some evidence of an expanded role for farms in grain supply chains.

We describe national and regional grain storage capacity and stocks between 1988 and 2019. The  data reveal four trends:

Trends in Storage Capacity and Production 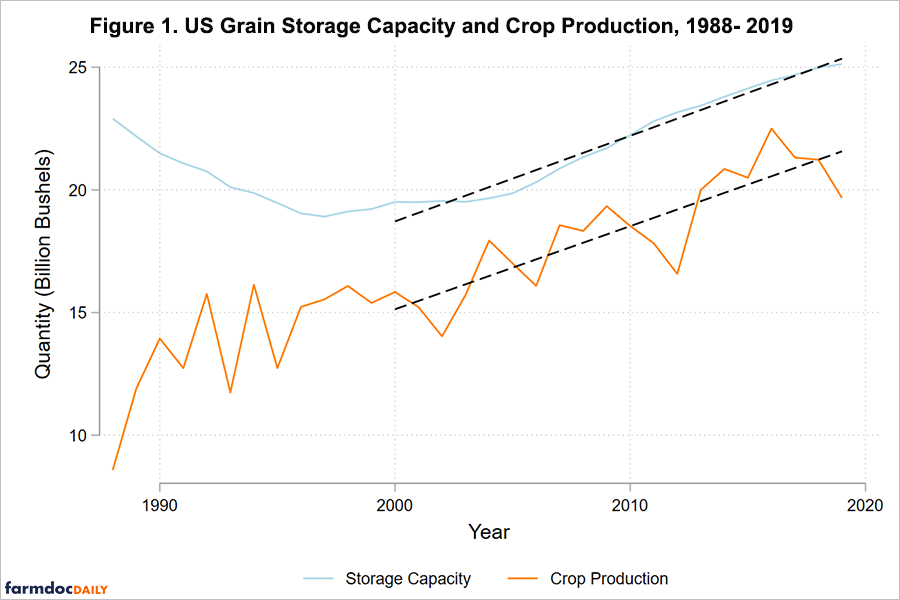 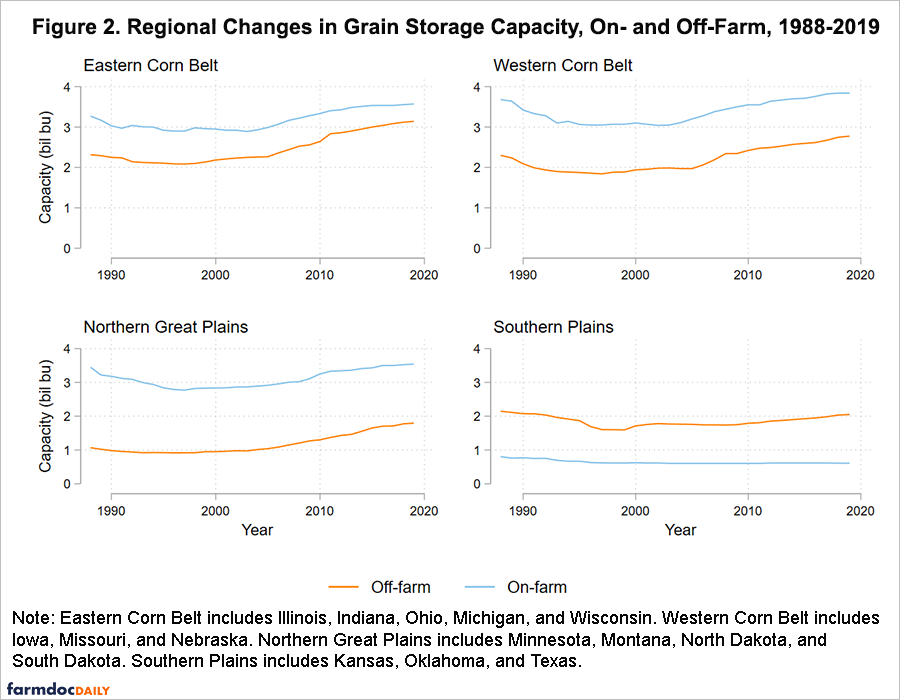 However, off-farm capacity has grown faster than on-farm capacity in all regions. Off-farm capacity was 46% of total capacity in 2019, up from 43% in 2000. In the major grain producing regions shown in Figure 2, there was a four percentage point increase in the share of capacity off-farm in all regions except the Northern Great Plains which saw a nine point change. While this change in off-farm share is not extreme, it contradicts the narrative of a growing role for farmers in the grain storage and handling activity traditional carried out by grain merchant firms.

Grain Stocks and the Usage of Grain Storage Capacity

Data on grain storage capacity alone do not describe how capacity is used. To do this, we gather data on inventories of corn, soybeans, wheat, and minor crops from the NASS quarterly Grain Stocks report. We calculate storage capacity utilization as inventory divided by storage capacity on each of the four dates reported by NASS. We order these dates according to the corn and soybean marketing year. 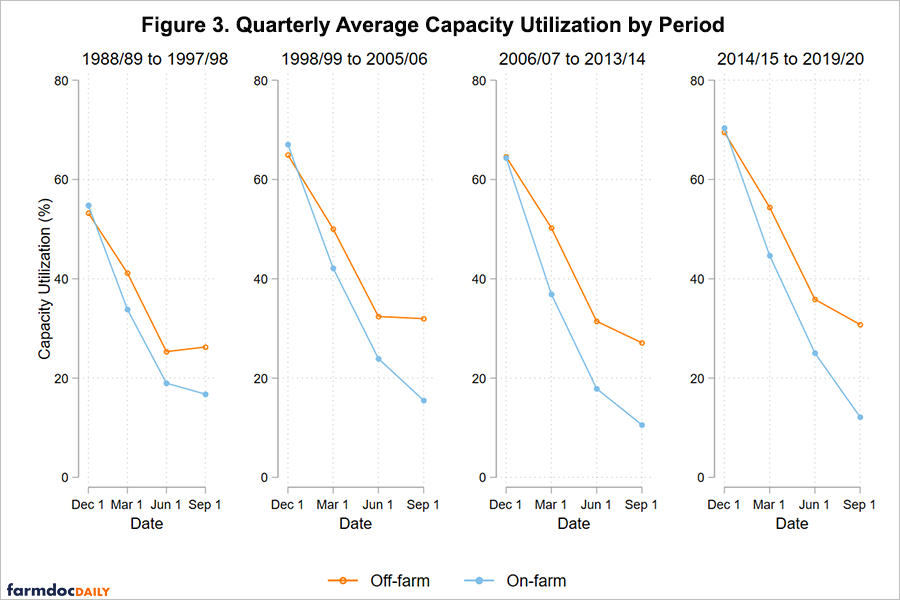 While on-farm and off-farm capacity utilization patterns in Figure 3 are similar, on-farm stocks are generally drawn down to a lower level (relative to total capacity) by the end of the marketing year. This was especially so during the commodity boom of 2006-2014. This reflects in part the farmers need to create binspace for the next harvest and the opportunity cost of holding grain across crop years. Year-end off-farm inventories and capacity utilization are also higher for the simple reason that stocks remaining in the grain transportation and handling supply chain by near the end of the marketing year are likely to be further from the farm and closer to end-users.

Grain storage capacity utilization illustrated in Figure 3 also reflects changes in US crop production over time. The increase in capacity utilization between June 1 and September 1 observed in the 1990s is mainly related to the harvest timing for wheat (and other summer-harvested crops.) As US wheat acres and production have declined (see farmdoc daily, December 12, 2017) the increase in inventories of summer-harvested crops like wheat has been dominated by the concurrent reduction in stocks of corn, soybeans, and other fall-harvested crops. In the 2000s and 2010s, off-farm capacity utilization falls rather than rises between June 1 and September 1. This change is concentrated off-farm because most grain storage in the Southern Plains is off-farm (see Figure 2).

Grain Storage Capacity Use by Commodity

As mentioned, changes in how grain storage is used can in part be explained by the composition of crops being stored. Corn, soybeans, wheat, and other crops differ with respect to absolute quantity, harvest timing, and production location. Figure 5 shows the proportion of total storage capacity used to store specific crops either on-farm or off-farm by quarter since December 2010. Inventories vary across marketing years with changes in production and inventory demand. For example, capacity utilization in the 2012-13 marketing is extremely low because of drought-inflicted declines in corn and soybean production that year. 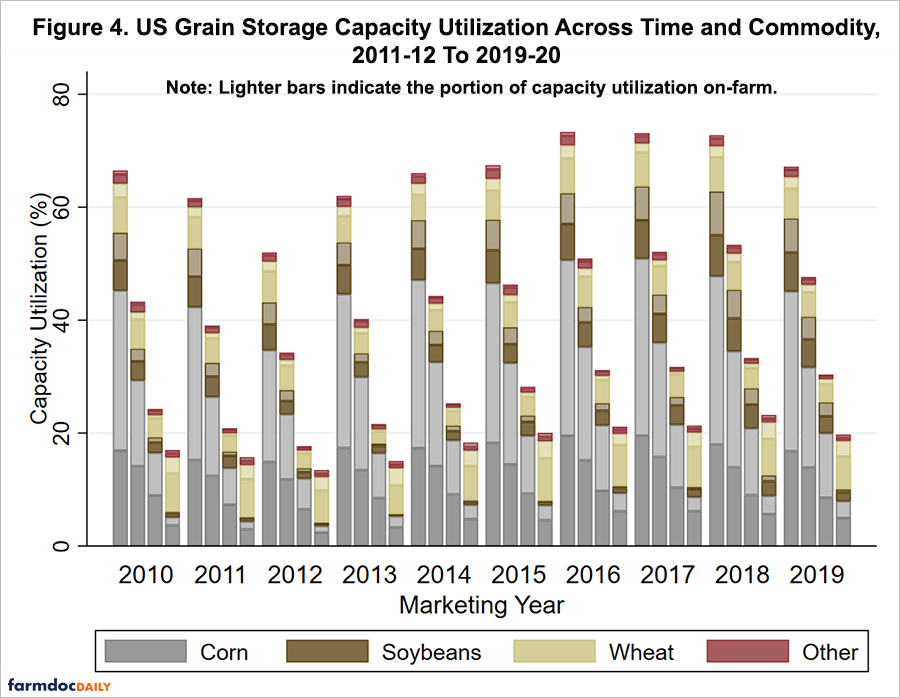 While corn dominates US grain storage infrastructure, other commodities periodically make greater use of grain storage. For example, the effect of the US-China trade conflict can be seen in Figure 4. During the 2018-19 marketing year, soybean inventories increased relative to prior years, especially year-end off-farm inventories.

The data in Figure 4 only describe inventory quantities relative to capacity. To truly measure the economic efficiency of grain storage capacity utilization, we would need to consider the risk-adjusted returns to storage similar to Zulauf and Kim (farmdoc daily, September 9, 2020). Such analysis is beyond the scope of this article.

Schnitkey, G. "Switches in Corn, Soybeans, and Wheat Acres in the U.S. and Illinois." farmdoc daily (7):228, Department of Agricultural and Consumer Economics, University of Illinois at Urbana-Champaign, December 12, 2017.