Since 2012, acres in the U.S. have been shifting out of corn and into soybeans, likely as a result of higher returns for soybeans than for corn. The longer termed trends since 1996 have been increases in corn and soybean acres and decreases in wheat acres. Within Illinois, acreage shifts have been predominately between corn and soybeans.

Corn, Soybeans, and Wheat Acres in the U.S.

Acre shifts have occurred in the United States after the passage of the 1996 Farm Bill (see Figure 1). The 1996 Farm Bill, informally known as the Freedom to Farm Bill, eliminated set-asides, the last vestiges of supply control implemented for program crops in farm bills (farmdoc daily, March 7, 2012). Since 1996, market forces and relative returns between crops have been more important in determining planting decisions. 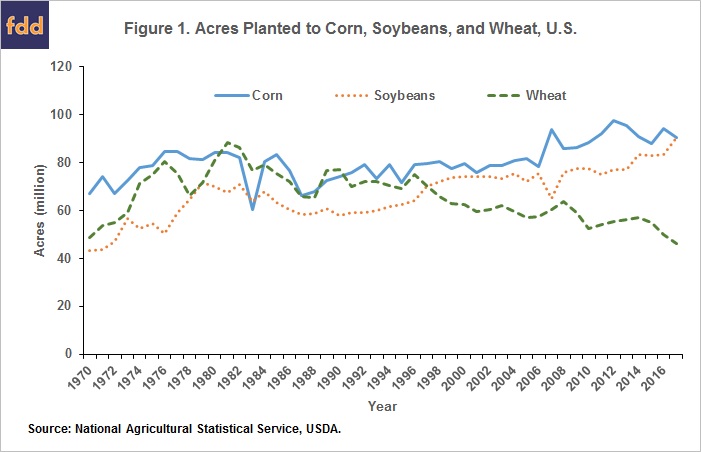 Much of the acreage changes can be changed by relative profitability. Figure 2 shows the value of production less total costs (VPTC), as reported by the Economic Research Service, U.S. Department of Agriculture. These are per acre values for corn, soybeans, and wheat averaged across the U.S. Note that VPTC includes only crop revenue and does not include crop insurance proceeds or Commodity title payments. As a result, values in Figure 2 understate returns, but should be highly correlated with returns. 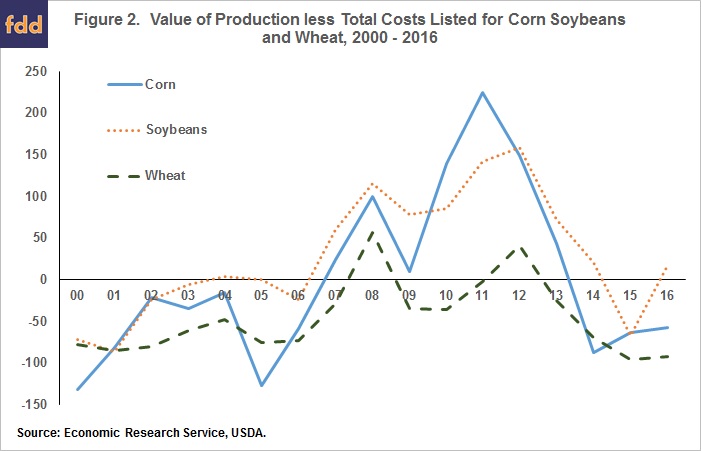 From 2000 to 2012, VPTC for corn and soybeans usually exceeded VPTC for wheat. During this period, corn and soybean acres grew at the expense of wheat acres. Since 2012, soybean VPTC has exceeded corn VPTC in all years except 2015. Since 2012, soybean acres have grown while the corn and wheat acres have declined. At the very least, relative profitability is suggestive of acreage changes 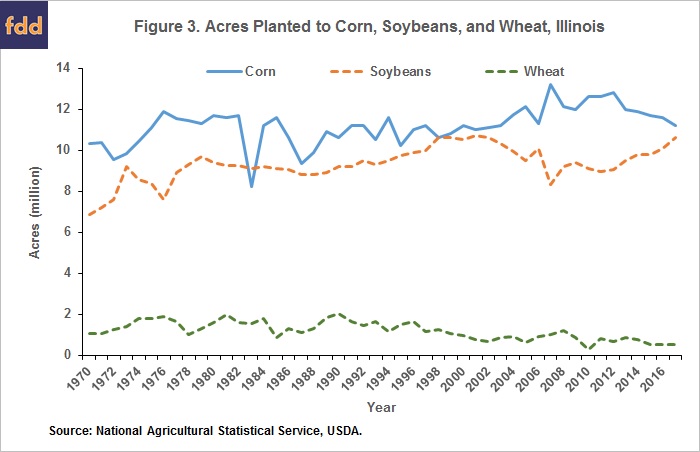 These shifts in acres have mirrored changes in the relative profitability of corn and soybeans. The change in relative profitability has been examined here on farmdoc daily (see recent articles on February 12, 2015, July 7, 2016, and July 25, 2017). Values summarized from Illinois Farm Business Farm Management (FBFM) indicate that corn was more profitable in most years from 2000 to 2012 (see Figure 4). From 2014 onwards, soybeans have been more profitable than corn. 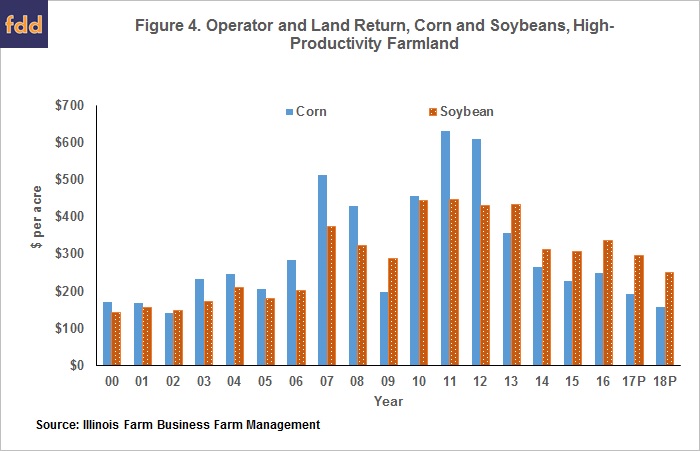 Since 2012, acres have shifted from corn to soybeans, likely as a result of higher profitability for soybeans. In 2018, acreage shifts may continue. Soybeans continue to be more profitable than corn and wheat, likely leading to continuing shifts in acres.