This article provides an estimate of US soybean stocks as of March 1, 2021. On March 31, USDA (United States Department of Agriculture) will release its March 1 survey estimates in the Grain Stocks Report. A record low stock to use ratio and relatively high prices for soybeans implies the March stocks report should not be overshadowed by the 2021 Prospective Plantings Report also released on March 31.

In the March 9, 2021 WASDE (World Agricultural Supply and Demand Estimates), USDA estimated a US 2020/21 ending stock to use ratio of 2.6% for soybeans. If realized, this is marginally less than the record low set in 2013/14. Increased sales to the People Republic of China and a reduction in US production contributed to the low ratio. Combined soybean shipments and outstanding sales to China through the first week of March 2021 increased 195% compared to the same week the year prior (446 million bushels March 2020 vs 1.317 billion bushels March 2021).  Meanwhile, 2020 US soybean production shrunk by 178 million bushels due to reduced acreage and yield between September 2020 and January 2021.

Estimating stocks begin with an estimate of supply at the start of the quarter.  To estimate March 1 stocks, the starting value is the December 1 stocks estimate in the December Grain Stocks Report.  At the start of the December to March quarter, soybean stocks stored in all positions on December 1, 2020 totaled 2.933 billion bushels. Soybeans unharvested as of December 1 are counted as on-farm storage and included in the Grain Stocks report. The US has imported fewer soybeans through the first five months of the marketing year compared with the previous 5-year average, but the expectation is for imports to pick up as domestic availability tightens. Adding in 3 million bushels of soybean imports during the quarter implies total soybean supplies of 2.936 billion bushels.

If year-end annual stocks estimated by USDA in March of 0.120 billion bushels remain the same and March 1st stocks are near the value calculated above, US soybean consumption is estimated near 1.439 billion bushels during the second half of the marketing year, assuming 29 million bushels of soybean imports. Imports are expected to be higher than in recent years as US soybean users are likely to find international soybeans price competitive to tight domestic supplies.

USDA’s March 1st stocks report and 2021 planting intentions, both released on March 31, 2021: will set the tone for soybean prices over the last six months of the 2020/21 marketing year. The historical tightness of soybean stocks with anticipated stronger than normal consumption in the second quarter justifies a reminder to not overlook grain stocks in favor of planting intentions on March 31st.

Table 1 summarizes the estimates provided in the article. 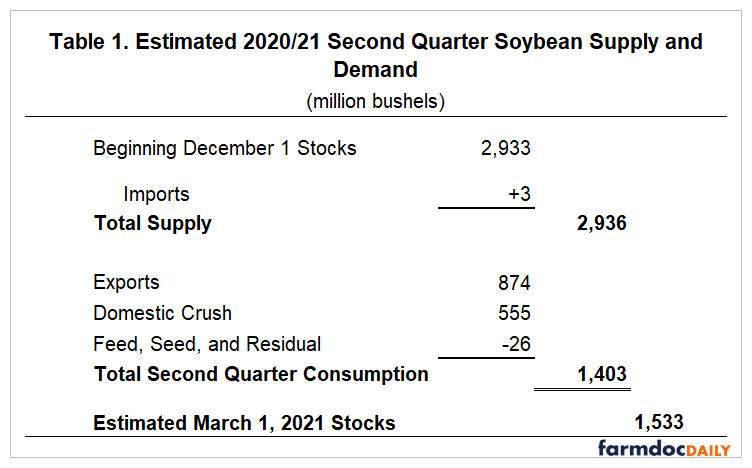