Farmers do not pay Illinois’ 6.25% sales tax on exempt agriculture inputs.  We examine the impacts removing existing sales tax exemptions resulting in a 6.25% sales tax added to fertilizer, pesticides, seed, and machinery-related expenses.  From 2015 to 2019, these sales taxes would have totaled $33,961 on northern Illinois farms and reduced net farm income by 54%.  Similar impacts would have occurred on central and southern Illinois farms.  The imposition of sales taxes would significantly reduce the profitability of Illinois grain farms.

The State of Illinois collects a 6.25% tax on sales.  Municipalities and other government bodies may impose additional taxes on sales.

There are three tax exemptions within regulations published by the Illinois Department of Revenue that have direct impacts on Illinois grain farms:

Those above would also apply to livestock production and other forms of agricultural production.

The impacts of removing sales tax exemptions on Illinois grain farms were evaluated using Illinois Farm Business Farm Management (FBFM) data for the five years from 2015 to 2019. Net incomes, tillable acres, and expenditures were averaged for the five-years to even out changes in revenues and expenses across time. Results are summarized for farms in: 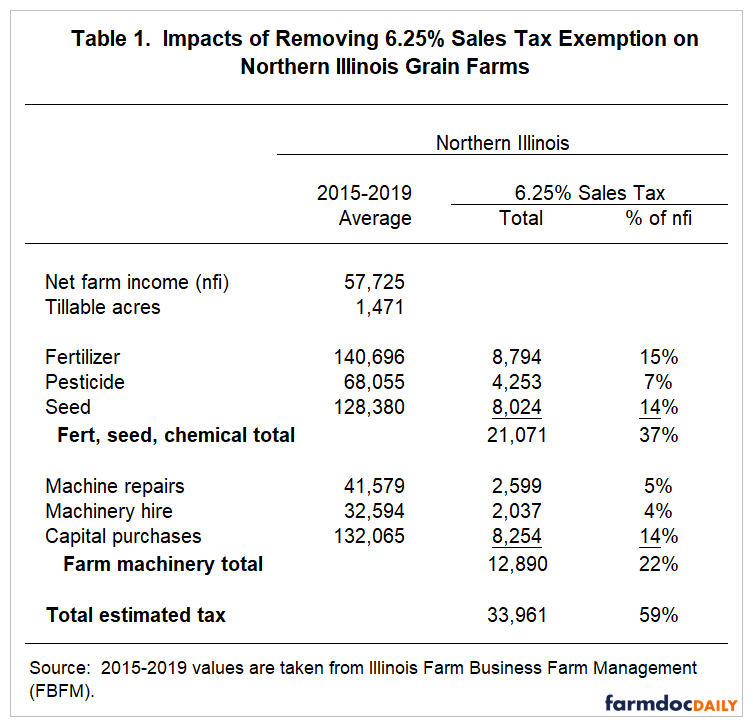 The Illinois sales tax is 6.25%. There could be municipality sales taxes in addition to the Illinois tax.

Other regions have roughly similar impacts (see Appendix Table 1). Much of the difference in results across the regions is due to differences in net incomes. Central Illinois had relatively better-growing conditions and higher incomes than northern and southern Illinois.

Ways in which the removal of the sales tax exemptions would be implemented are not known. For example, one type of expenses may continue to be tax exempt, while another type of expenditure could be subject to the sales tax. The majority of capital purchases relate to machinery but also include building and land improvements.

The imposition of a sales tax on currently exempted items would have reduced net farm income by over 50% from 2015 to 2019.  While the exemption removal would impact input supply firms and likely change input prices, similar results would occur in the future if a sales tax was imposed on Illinois farmers.