Soybean production in Brazil over the past 30 years has increased almost ninefold, from 566 million bushels for the 1990/91 crop to 4,965 million bushels for the 2020/21 crop, according to data from the National Supply Company (Conab). Harvest is underway, and the forecasts so far are for another record crop in Brazil, despite a dry planting season and excessive rain toward the end of the season.  Brazil’s growth in the past three decades results from increases in planted area and increases in yields.

Production in U.S. and Brazil

In the past several years, Brazil has surpassed the United States and has become the largest soybean-producing nation. In the 2019/20 production year, Brazil is projected to produce 4,587 million bushels of soybeans (Conab) while the U.S. produced 4,135 million bushels (USDA). 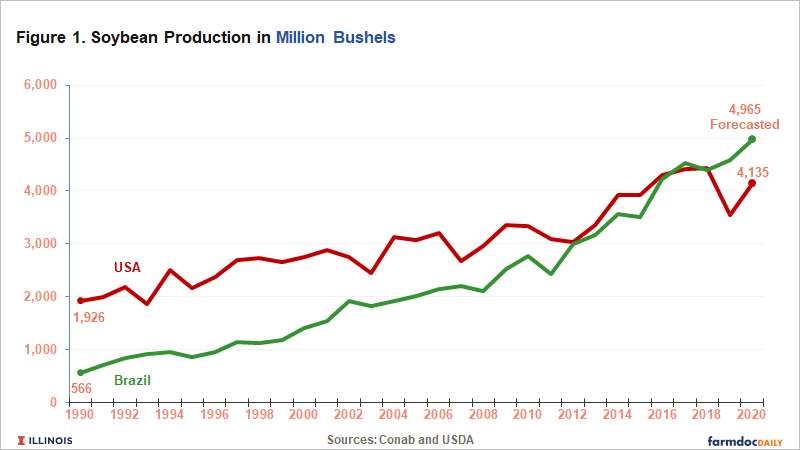 Brazil’s soybeans exports are 3,049 million bushels valued at $28.6 billion in U.S dollars, ranking second all-time among Brazil’s soybean exports. China purchased 73.2% of Brazilian soybeans exported in 2020, which corresponded to $20.91 billion (Mapa, 2021). The soybean expansion happened within the world context of growth in animal protein consumption. The worldwide market for poultry, pork, and beef has grown significantly in the past decades. That, in turn, drove the increase in the demand for animal feed, normally derived from soybeans and corn. 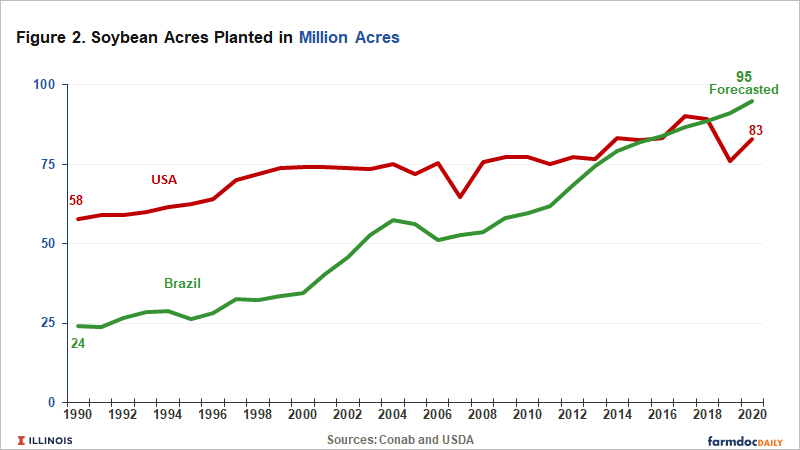 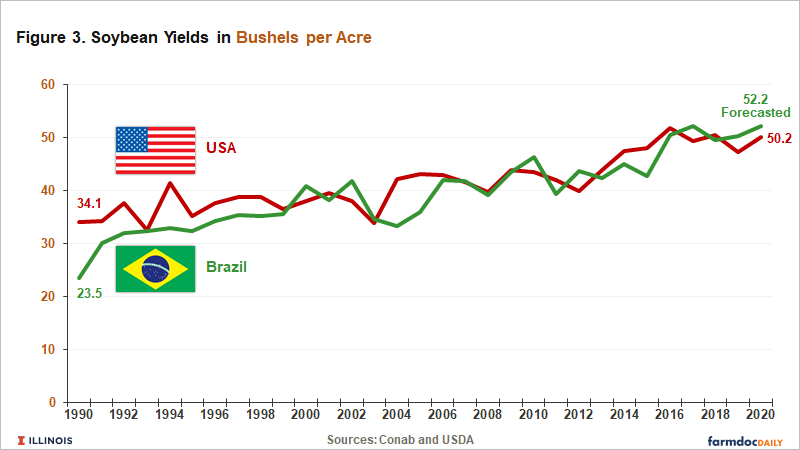 The growth rate in Brazil results from investments in technology (such as machines, seeds, pesticides, and fertilizers) and the efficiency of scientific research. Over the past decades, several technologies have positively affected yield on a global scale. The next cutting-edge likely is digital technology. Recently, the collective confluence of the Internet of Things (IoT), big data, accessible cloud computing, and advances in artificial intelligence are driving digital transformation (Siebel, 2019). The use of the data in agriculture can contribute to both economic gain and reduction of environmental impact (Sonka, 2016). 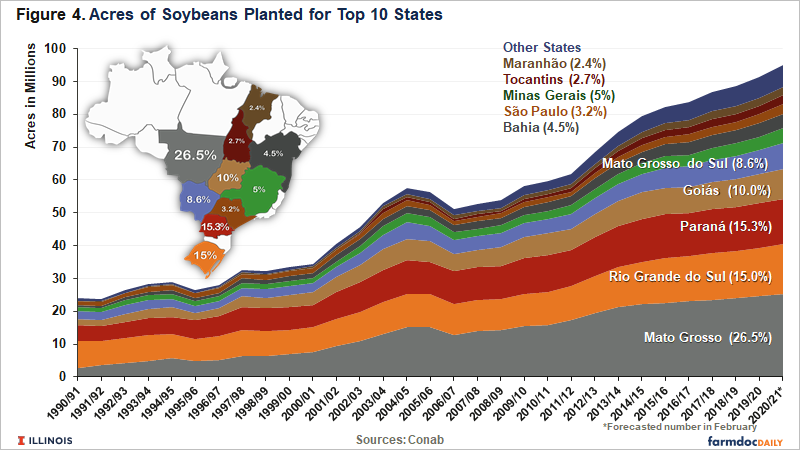 The majority of the future expansion of Brazilian soybean acres likely will occur in the Midwest, North, and Northeast of Brazil (see Figure 4). Farmers looking for larger areas to farm tend to move to the agricultural frontiers, such as Matopiba (a region formed by four Brazilian states: Maranhão, Tocantins, Piauí, and Bahia). Most of the recent land cultivation in this region has occurred through highly mechanized and professional operations, a stark contrast with the historical patterns of agricultural frontiers in Brazil.

Farmers were able to plant in the Midwest and Northern states of Brazil because of the development of seeds suited to the particular climates.  Great strides have been made in growing in the savanna, a vegetation type that grows under hot, seasonally dry climatic conditions. The variation in land prices also stimulated migration to new frontiers. In the 1990s, for example, land in the North or Northeast was ten times less expensive than in the South. Another factor was the availability of credit in this period, public and private, to buy agricultural land (Embrapa, 2017).