Brazil’s corn production has increased over the past two decades because of the increased production of second crop corn, also known as the safrinha, or “little harvest” in Portuguese. Over the past 20 years, the second crop corn production has risen thirteenfold (Conab). In recent years, a third crop corn season started to emerge in the north and northeast of Brazil. So far, projections indicate record-setting levels of total production in Brazil for the 2020/21 crop year at 4,290 million bushels, likely continuing the country as the second largest exporter in the world and the main competitor of the United States in the international market.

Extraordinary Increase of the Safrinha 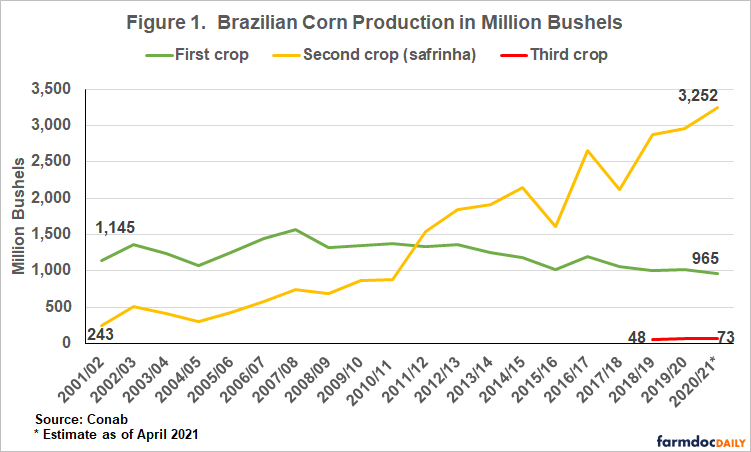 Corn production has increased in the Midwestern states of Brazil, such as Mato Grosso, Goiás, and Mato Grosso do Sul.  In these states, safrinha corn production has grown rapidly. The tropical climate in Midwestern states allows the planting of soybeans in the summer followed by corn in the winter, in the same area. Meanwhile, the same is not possible in the extreme southern Brazilian due to the lower temperatures during the winter.

Among the top five states for second crop corn, Mato Grosso leads with 43.8% of production, followed by Paraná (16.3%), Mato Grosso do Sul (13.4%), Goiás (12.8%), and Minas Gerais (4.5%). These five Brazilian states represent 90% of the total corn produced in Brazil. Twenty-five years ago, it was non-existent in these states. The safrinha’s expansion has been spurred on by several factors, such as:

Since 2018/19, Conab began officially considering the third crop corn which is harvested primarily from September to December.  Third crop corn primarily occurs in the Northern and Northeastern Brazilian states of Bahia, Sergipe, Alagoas, Pernambuco, and Roraima states. Third crop corn is projected to reach 73 million bushels in 2020/21, according to the forecast from Conab. Despite representing only 1.7% of the total corn production, this planting has the potential to continue growing.

The second crop corn currently faces late planting because weather caused delays in soybean harvest in 2021 caused by rainy weather. By end of the March, 91.7% of the total second corn crop was planted in Brazil. During the same period last year, this percentage was 96.2%, according to Conab. The general delay is estimated between 10 and 15 days.

For April, the weather forecast is rain below the historical average. Consequently, there is a risk that the corn planted later will be affected, and the harvest may have lower yields than last year, when the national average was 5.456 kilos per hectare. So far, however, the projections indicate record-setting levels of production, 3.252 million bushels, 10% higher than 2019/20 according to the forecast from Conab (see Figure 1).

Brazil has emerged as the largest U.S. competitor in the global corn market.  Brazil has been the second largest global corn exporter for 3 of the last 5 years, surpassing Argentina. In 2020/21 (October/September Year), Brazil’s corn exports are estimated to reach a record of 1,594 million bushels, representing 22% of the world total. Meanwhile, U.S. exports are projected to exceed 2,559 million bushels, 35% of the world total, according to the forecast from the USDA (see Figure 2). 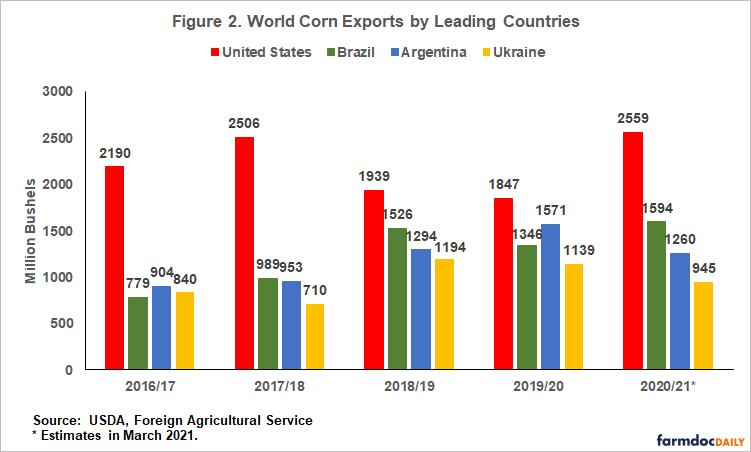 Brazil’s share of world corn trade increased from 7.5% percent in 2010/11 to 22% percent in 2020/21. In the USDA’s Agricultural Projections to 2030, Brazil is expected to be the world’s second largest corn exporter over the next 10 years – behind the United States and ahead of Argentina and Ukraine. As a result, U.S. corn exports could be affected in the longer term by the emergence of Brazil as a major corn producer. In 2020/21, global exports (October/September Year) are projected to exceed 7.283 million bushels. This represents 250% growth since 2000 and, 100% since 2010 (USDA, 2021). Economic growth and food consumption patterns driving meat demands lead to increased feed demands worldwide.

Safrinha corn, or second crop corn, has been the main driver of increased production and export of corn from Brazil. Nowadays, the safrinha represents 76% of total corn production in Brazil, concentrated in five states.  Likely continued increases in safrinha corn, as well as growth in third-crop corn likely will continue to increase production from Brazil.