Agricultural carbon markets exist through privately and publicly owned companies with aim to reduce carbon emissions through trade of carbon units sequestered at the farm level. The sale of carbon credits presents an opportunity for farmers to receive financial benefits from changing to more environmentally beneficial agricultural practices, although carbon prices may not currently be high enough to cover the cost of switching practices. Information about carbon markets can be challenging to navigate because each company typically has a different structure for payments, verification, and data ownership. This article provides a brief background about carbon markets, information about the breakeven price for carbon sequestration practices, and some questions for farmers to consider about selling carbon credits.

Greenhouse gases (GHG) change the natural balance between energy received from the sun and emitted from the earth by trapping energy from the Earth in the atmosphere, altering the climate and weather. Greenhouse gases emissions are either anthropogenic or natural. Anthropogenic emissions are caused by human activities such as burning fossil fuels, and natural emissions are caused by such occurrences as volcanic eruptions, the Earth’s orbit, the carbon cycle, and the sun’s output. The effect of anthropogenic emissions is greater than the effect of natural emissions, with human activities suggested to be the main cause of global warming over the last 50 years. The major greenhouse gases are carbon dioxide (CO2), methane (CH4), nitrous oxide (N2O), and various synthetic chemicals (EPA, n.d.)

Carbon credits quantify carbon sequestration. A carbon credit is a tradeable certificate representing the right to emit one metric ton of carbon dioxide (CO2) or the equivalent amount of another greenhouse gas (such as methane, nitrous oxide, etc.), called a carbon dioxide equivalent (CO2-eq). There are two types of carbon markets: compliance and voluntary. In a compliance market, the government uses a cap and trade system where pollution permits are allocated to companies. If a company wants to pollute more than the set amount, it must purchase more permits. In a voluntary market, companies voluntarily purchase carbon credits to offset their emissions.

Currently, markets organized by publicly and privately-owned companies are the only way U.S. farmers can sell carbon. Secretary Vilsack recently stated the government is exploring how to design a carbon bank to benefit farmers (Dorning 2021). In the USDA transition memo, the Climate 21 Project, the authors recommend establishing a carbon bank financed through the Commodity Credit Corporation (CCC).  The carbon bank would allow the USDA to finance GHG reduction and carbon sequestration activities by purchasing carbon credits from farmers and forest owners (Bonnie, Jones, and Harrell, n.d.). However, a carbon market system must first be established, and many questions still exist about what the government’s role in the carbon bank would look like (Vilsack 2021).

The soil plays a vital role in the carbon cycle. Plants take in carbon through photosynthesis and release some of the carbon through respiration. When the plant dies, carbon remains in the plant and is added to the soil when it decomposes. The soil organic matter (SOM) stores the carbon, and it can remain stored or be released into the atmosphere depending on the agricultural practices used. Factors such as vegetation, soil characteristics, drainage, and climate affect the length of time and amount of carbon storage (ESA 2000).  Some agricultural practices help sequester the carbon in the soil. A list of practices used for carbon sequestration on crop farms and their breakeven prices, including a decrease in revenue from a reduction in yield when applicable, are displayed in Table 1. The breakeven price is in 2010 dollars per metric ton of carbon dioxide equivalent and represents the breakeven carbon price for a representative farm to undertake the practice. Farms can also sequester carbon through other crop and livestock practices not discussed in this article. 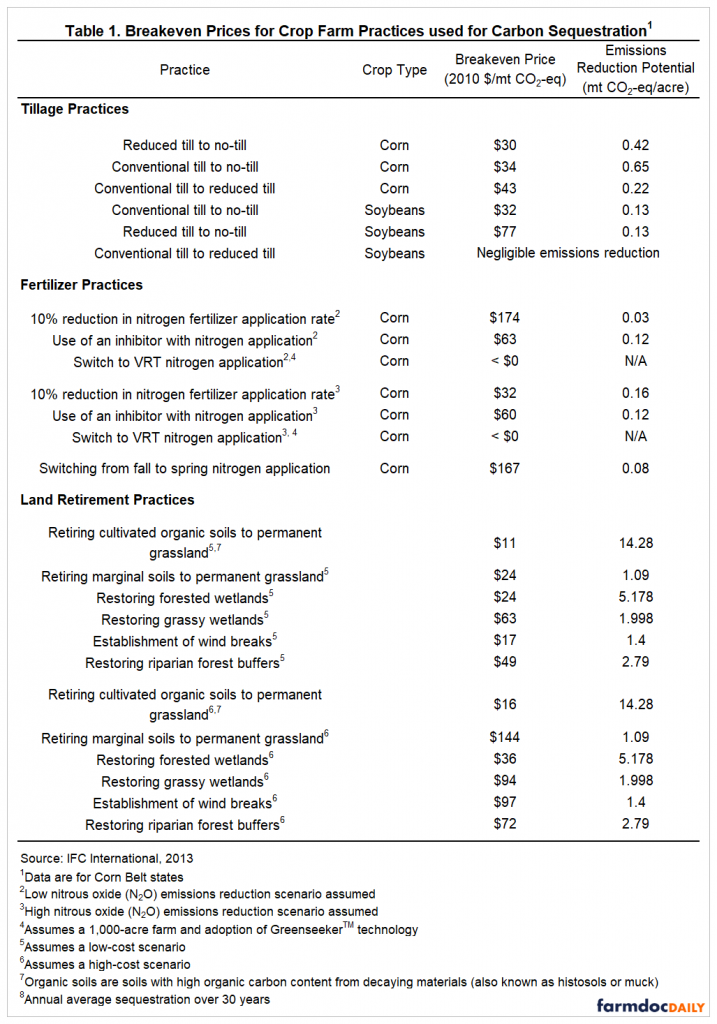 The breakeven price represents the carbon incentive level where adopting a carbon sequestration practice becomes economically viable for the farmer. This is the point where the net present value of the benefits is equal to the net present value of the costs. For example, the price of carbon would need to be $32 per metric ton of carbon dioxide equivalent (CO2-eq) for the farmer to breakeven switching from conventional tillage to no-till on soybeans. The breakeven prices are estimates based on the average annual soil carbon sequestration, adoption cost, yield changes, and average crop prices, when applicable. Different scenarios such as low-cost, high-cost, low-emissions, and high-emissions reflect the range of scenarios that occur (IFC International 2013). The breakeven prices in Table 1 serve as a general estimate, and actual breakeven prices will vary from farm-to-farm depending on costs, soil types, etc. Also, breakeven prices are from an article produced in 2013, so prices and costs likely have changed since the publication of the article.

Below are a list of questions to consider when deciding to sell carbon credits. The purpose is to provide some general information about carbon markets and help a farmer think carefully before making a long-term and difficult to reverse decision about selling carbon credits. The details of the contract can have large financial implications for farmers. Some questions to consider when selecting a carbon market:

What approaches are there for entering a carbon marketplace?

Farmers considering selling carbon credits are advised to carefully consider all marketplaces and the terms and conditions of participating. There are typically two approaches for farmers entering carbon markets: using an aggregator or a data manager.

How much will I be paid? What is the total amount paid, the portion I get, and the portion the aggregator or data manager gets?

Who owns my data, and what can the aggregator or data manager do with my data? Will they share my data with anyone?

Data privacy is an important aspect to consider when choosing a carbon market. It is important to receive a clear answer from the marketplace about who owns your data, what can be done with your data, and how your individual or aggregated data can be used or sold.

What currency is the payment in?

The payment could be in the form of cash, cryptocurrency, or credits toward purchases.

How long will it take to get the money?

A portion of the money may be paid upfront or issued at a future date. There may be a payment program to give the farmer a certain percentage of credits or payment gradually over a specified period.

Can the carbon credits be stored? If so, how long can they be stored for?

Some companies may allow carbon credits to be banked and sold later in case the market price goes up.

How much will it cost to sell my carbon credits?

Farmers will have to pay a fee for soil sampling or third-party verification, although some companies may cover these costs. There may be additional fees such as administrative, registration, insurance, and/or transaction fees depending on the agreement. Some companies may withhold a percentage of carbon credits to cover carbon loss and administrative fees.

I adopted carbon sequestering practices on my farm in the past. Can I be paid for them?

How often does the data need reported?

There are often a specific number of times a farmer will have to report their data and provide soils samples. A third-party verifier may have to visit the farm at a specified period as well.

How many years does the contract last?

Contracts could be 10 to 20 years or more, depending on the company.

What happens if the land ownership changes hands?

There could be penalties for the contract holder if the land is rented out or sold during the contract and the tenant or purchaser does not follow the agreed-upon sequestration practices.

Who needs to be involved in the decision to sell carbon credits?

Anyone with an ownership stake in the land will need to be involved in the process. Ownership of carbon credits can depend on the leasing agreement. For rented land, farmers may need to provide an attestation of their right to market carbon on the property to the company. Because of the long-term nature of the contracts, it is important to understand what implications there are if the farmer stops renting the land in the contract.

What practices are the companies paying for?

Companies are currently only paying for certain practices, so even if a practice is listed in Table 1, it may not be a practice that a company will pay for. Some typical practices companies are paying for include reducing tillage, changing nitrogen rate or practices, planting cover crops, and changing crop rotation.

Is there a limit to the number of credits per acre?

Will I need to invest in new technologies or platforms?

Some companies may require a technology investment from the farmer, such as requiring the farmer pay for a subscription to the company’s online platform.

Some other questions to consider:

Farmers considering selling carbon should be careful when selecting a market and fully understand any conditions, requirements, data ownership structure, and penalties the company may have. It is essential to understand the specific terms and conditions and negotiate any changes before signing a contract. The farmer may want to have an attorney review the contract and explain any rights and obligations before signing. The breakeven price for many carbon sequestration practices is greater than the carbon price markets are offering, so carbon prices need to increase to cover the cost of most carbon sequestration practices completely. Carbon prices needed to be at least $40–80 per metric ton of carbon dioxide by 2020 and will need to be at least $50–100 per metric ton of carbon dioxide by 2030 to reduce emissions to the temperature goals of the Paris Agreement in a cost-effective way (WorldBank 2020). There is also a lot of uncertainty about long-term costs and returns for carbon sequestration practices. Many carbon programs are still in the pilot process and discussions about a government carbon bank are in progress. In the future farmers may have more options for selling carbon credits, which could affect carbon price. Selling carbon credits is a long-term and hard to reverse decision that usually involves locking into a contract for ten years or more, so it may be beneficial for farmers to wait until the carbon marketplace becomes more developed before making a decision.

EPA. n.d. “What are the Trends in Greenhouse Gas Emissions and Concentrations and their Impacts on Human Health and the Environment?” Accessed April 9, 2021. https://www.epa.gov/report-environment/greenhouse-gases