The USDA released the 2021 Prospective Plantings report on March 31st.  The report indicated that U.S. farmers intended to plant 91.444 million acres of corn and 87.6 million acres of soybeans this year.  The market reaction to the release of the report was stunning, with both corn and soybean futures increasing the daily allowable limit.  The purpose of this article is to provide historical perspective on the magnitude of the corn and soybean acreage surprises contained in last week’s Prospective Planting report.  The analysis complements that found in a farmdoc daily article (April 5, 2021) earlier this week.

The first step in the analysis is to define what we mean by an acreage “surprise.”  Simply put, this is the difference between the average market expectation for planted acreage before the Prospective Plantings report is released and the USDA estimate of planted acreage released in the report.  Market expectations are collected by news services like Bloomberg and Reuters and an average of the expectations is often used by traders and academics alike to represent the market consensus before an important USDA report is released.  We use a series of average market acreage expectations before Prospective Plantings reports over 1983-2021.  Because the level of corn and soybean acreage has increased over time, the percentage difference between average acreage expectations and USDA estimates is used for the analysis.

Figures 1 and 2 show planted acreage surprises for corn and soybeans, respectively, over 1983-2021.  Note that a positive percentage surprise is considered bearish because this implies that the USDA acreage estimate is larger than the average market expectation, and vice versa.  Notice how close the average market surprise is to zero for both corn and soybeans.  There is a slight bias to bullish acreage surprises in soybeans (-700k acres), but this is insignificantly different from zero.  From a statistical standpoint, the data indicate that the average market surprise is equal to zero.  This makes logical sense because a significant non-zero surprise would represent a contradiction.  If a surprise is truly a surprise, then positives and negatives should balance out over time. 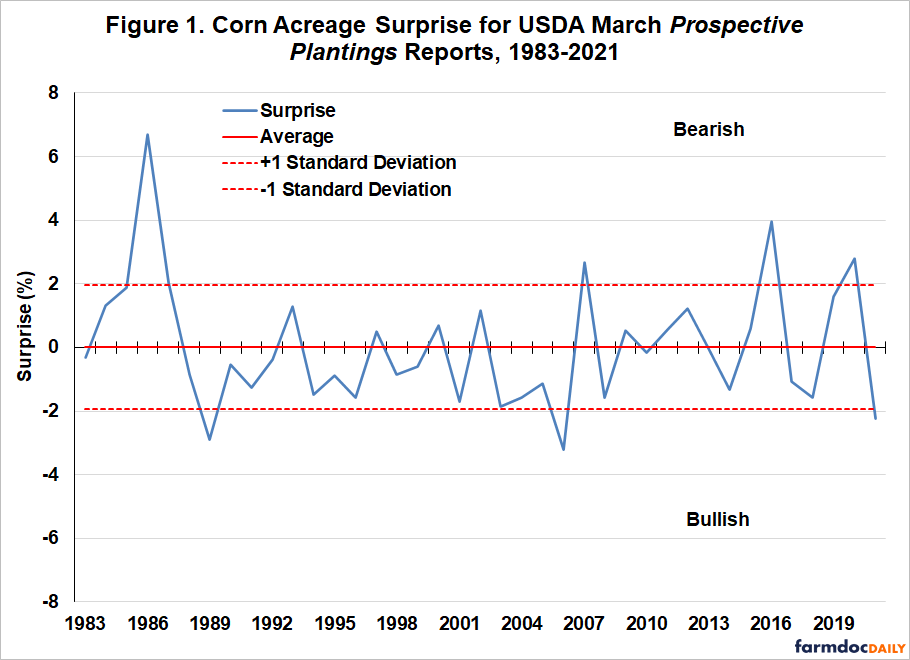 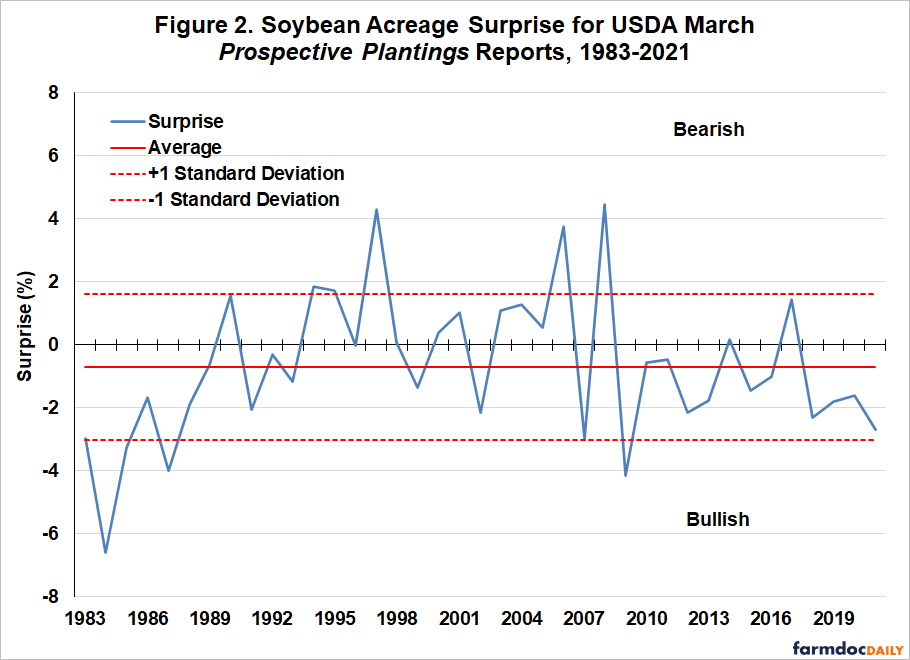 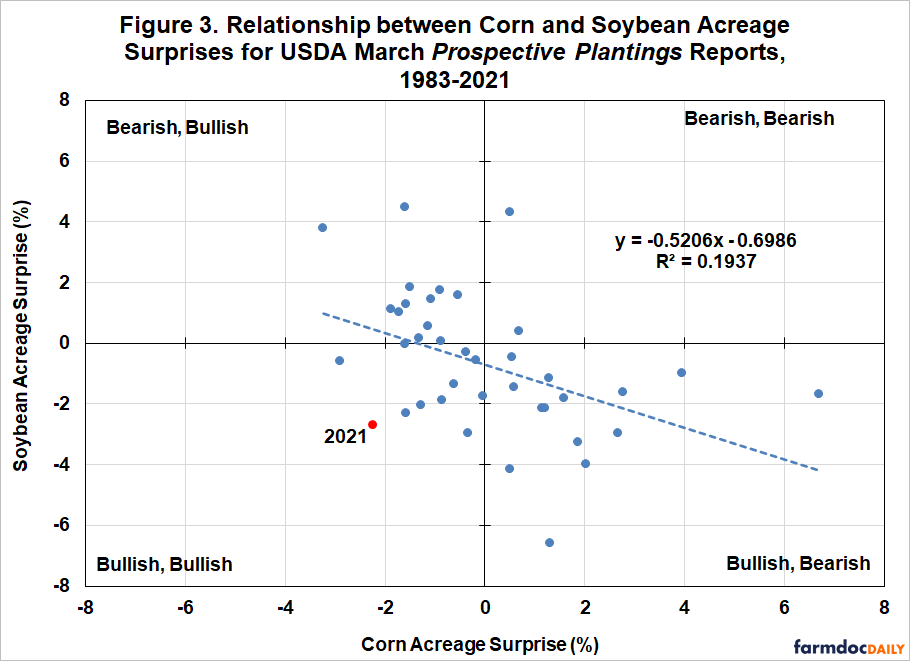 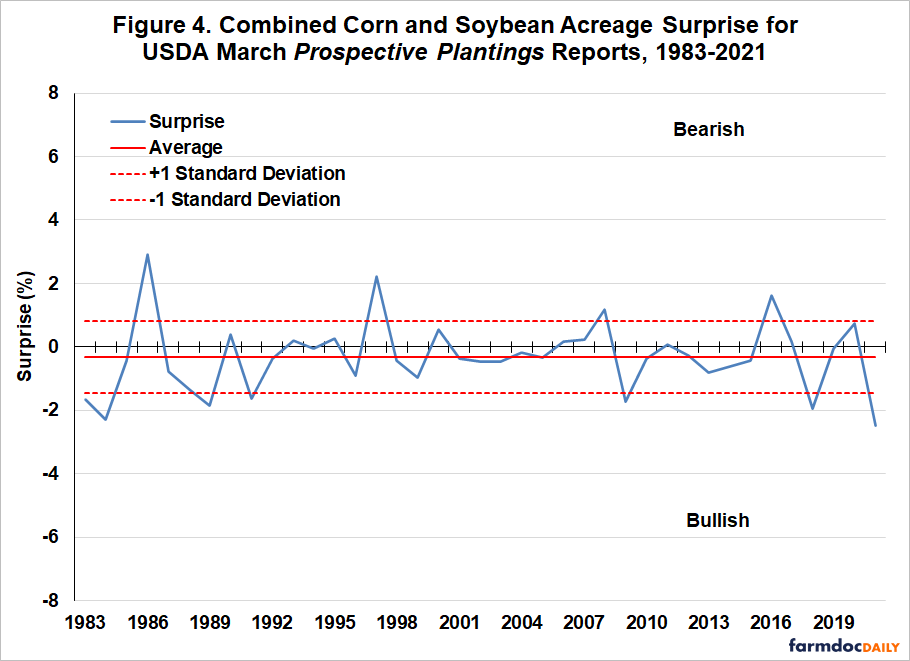 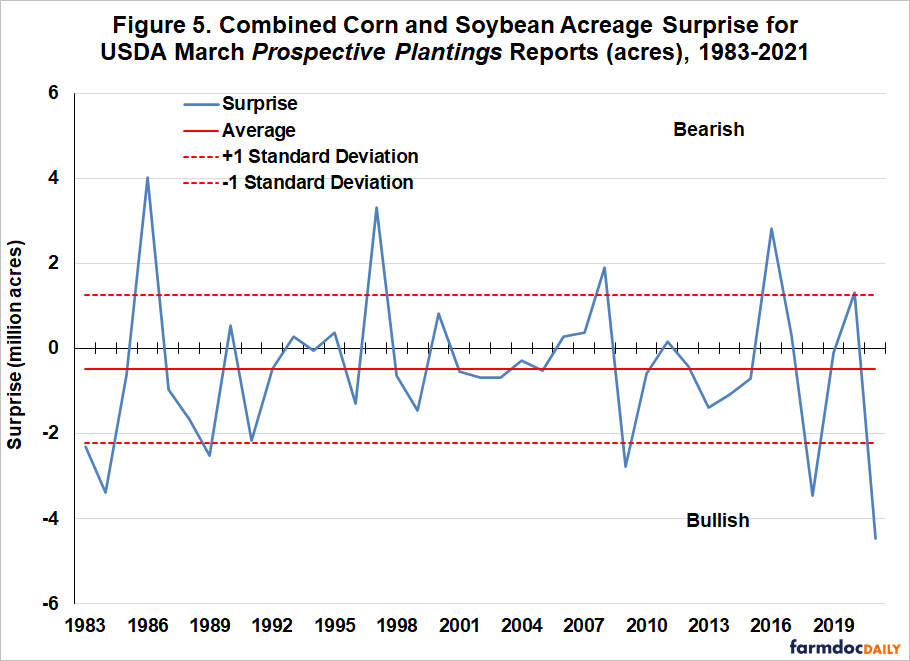 A key issue moving forward is whether estimates of the combined total of corn and soybean planted acreage will increase in future USDA reports, the first of which is the June Acreage report.  Future farmdoc daily articles will investigate whether historical patterns provide any clues as to the likelihood of this happening.