This article recaps the information provided by the United States Department of Agriculture (USDA) in the March 31, 2021 release of March 1 Grain Stocks and 2021 Prospective Plantings. The quarterly Grain Stocks report provides an opportunity to assess the pace of consumption during the first half of the corn and soybean marketing year, and the first three quarters of the marketing year for wheat as well as on-farm and off-farm stock positions by state. The latter sets the foundation for cash-futures basis ahead of 2021 US production.  The point in time Prospective Plantings report provides an indication of what US producers anticipate plantings to be in 2021 as of the first two weeks of March. These intentions set the foundation for deferred futures contract prices.  Actual plantings may differ from the March intensions depending on planting conditions, economic incentives, and producer sentiment. These factors will be captured in the June Acreage report.

The information provided by USDA in the March Grain Stocks and Prospective Planting reports often reveals broader themes driving future prices in the grain and oilseed complexes. The remainder of this article covers five observations derived from the March 2021 reports. 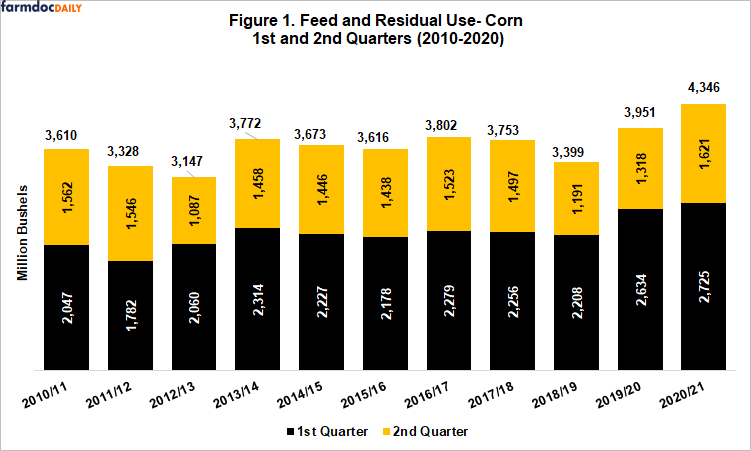 Elevators, millers, and processors use local Basis (Cash price minus Futures Price) to attract grain and oilseeds into the business when needed. All else equal, basis strengthens when end users work harder to pull in the grain remaining on farm. With strengthening basis levels through much of February and March across the Midwest, concern of available grain on farm began to build.  Figure 2. illustrates the share of grains stocks as of March 1 on and off farm since 2015. Share of corn, soybean, and wheat stocks on farm as of March 1, 2021 were 52%, 38%, and 22%, respectively. While among the lowest levels since 2015, these on-farm shares are not significantly different from prior years. The shares of grain remaining on farm suggest farm bins are not completely empty. USDA does not ask producers to distinguish between grain sold for delivery at a later date and unpriced grain. Therefore, it is not possible to determine the share of available unpriced grain relative to previous years. 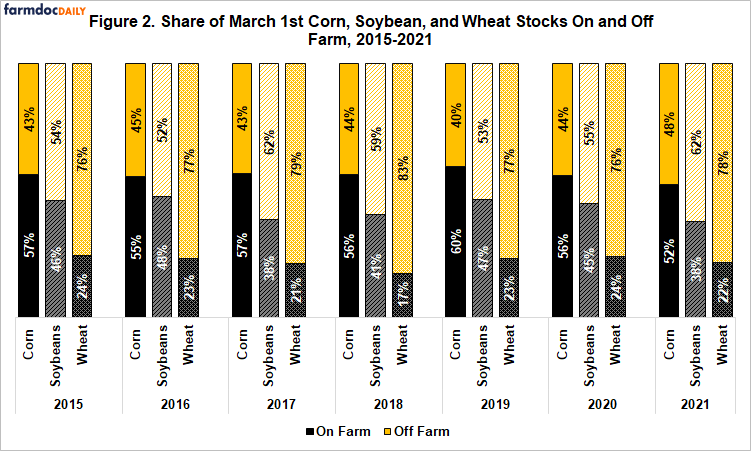 Figures 3 and 4 attempts to identify where local deficiencies in grain and oilseed availability may be located across the country. Each state’s share of on-farm corn and soybean stocks were compared against national stock shares during 2013-2018. States were then classified as having a comparatively strong, comparatively weak, or a comparably normal basis relative to all of the other states combined. Expressed differently, basis can be up across the country, but relative basis may be comparatively stronger in blue states and comparatively weaker in red states. This analysis assumes the share of grain stored on-farm that has been sold is not abnormally large or small as of March 1, 2021. 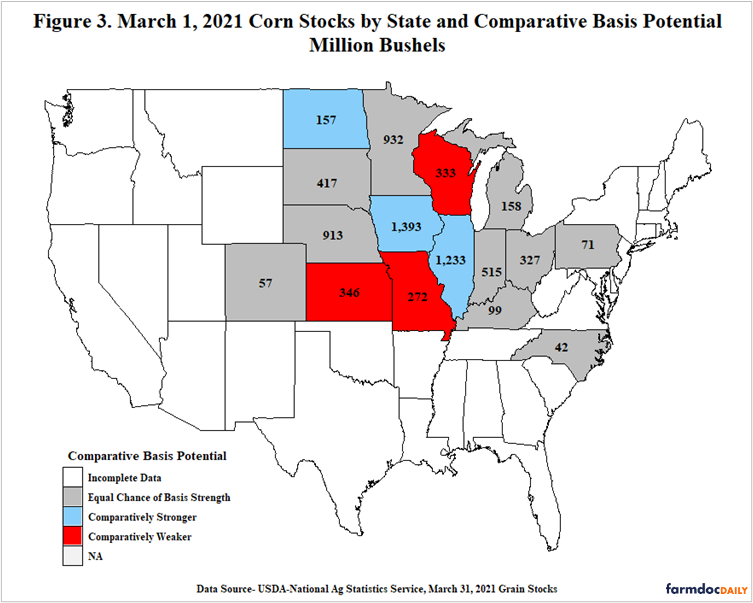 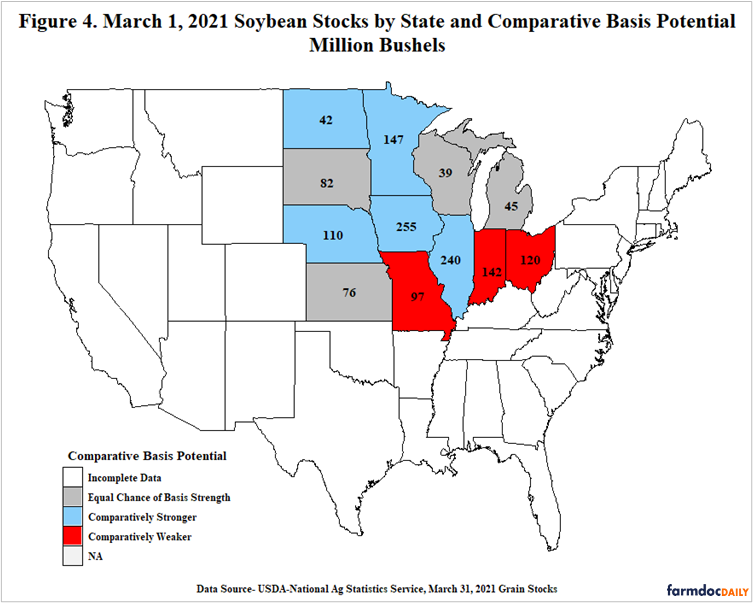 One of the largest surprises in USDA’s Prospective Planting report by market observers was the collective sum of intended plantings for all field crops in 2021 at 316.2 million acres. Between 2015 and 2018 US producers planted just under 319 million acres of all principal crops combined (see Figure 5). Persistent and frequent rainfall prevented planting in many Midwest states in 2019 and lingering flood effects and decreasing market prices due to the Coronavirus early in the 2020 planting window relative to crop insurance guarantees held acres out of production again last year. With the highest crop insurance guarantees for corn and soybeans since 2013, producer optimism from US export sales, uncertainty over the size and availability of the South American crop given later than normal planting, and funds available from multiple rounds of the Coronavirus Food Assistance Program; market analysts expected acreage estimates to total the same or sightly above the 2015-2018 average. The lower than expected total principal crop acres triggered limit up ($0.25 for corn and $0.70 for soybeans) moves in corn and soybean futures contracts directly following the report’s release. 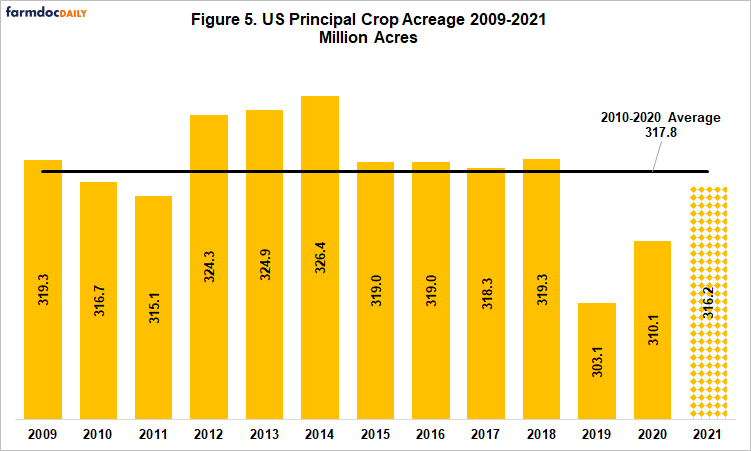 USDA’s annual Prospective Planting report is the first step in the bid-ask process. US producers put forth their 2021 crop intentions and the markets respond. Producers then adjust their planting decisions based on the price reaction.  The 2021 Prospective Planting and Acreage reports serve as two points in time, but the negotiation between producers and the market moves fluidly between March and June. It is common to see planted acres in the June Acreage report differ from what producers indicated they would plant in the March Prospected Planting report (see Figure 6). On average, corn and soybean planted acres increased by 437 and 1,025 thousand, respectively, from March to June over the years 2014-2018. Soybeans have historically seen the largest increases in planted acres. If planting conditions allow, it is expected acreage will increase by a combined 1.5 million acres in the June Acreage report. The years 2019 and 220 are not used in this analysis because record large changes in intended acres occurred during these years in conjunction with historically large prevented plant insurance claims. 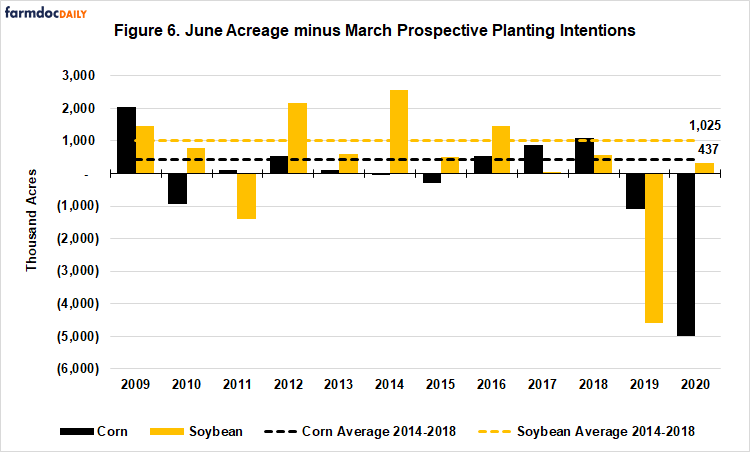 Figure 7 illustrates states where principal crop acreage reported in the 2021 Prospective Planting report differed by more than one standard deviation from a 5-year Olympic average of acreage between 2014-2018. States in the Upper Plains, including Minnesota, North Dakota, and South Dakota, all have the best chance of increasing principal crop acreage given the relationship to 2014-2018 planted acreage. At 24.3 million acres, Kansas had a strong increase in 2021 principal crop acres on higher grain sorghum acreage and winter wheat seedings. Montana, Pennsylvania, Texas, and Wisconsin all saw acreage increases in 2021 compared to the historical period. Input prices for fuel and fertilizer have increased over the last five months and could be a hindrance to additional acres. Weather during May and June has a large impact on final acreage of all crops but understanding where acreage may increase is important to local cash price as well as average US cash price if collectively large enough. 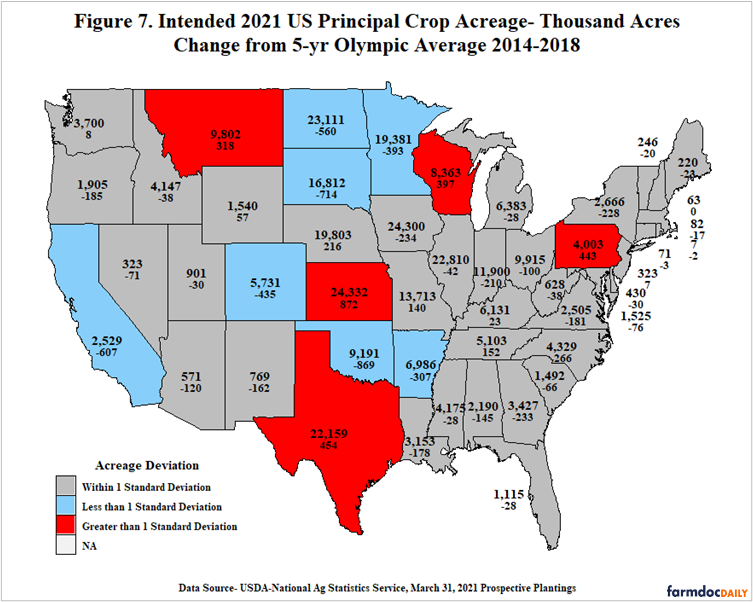 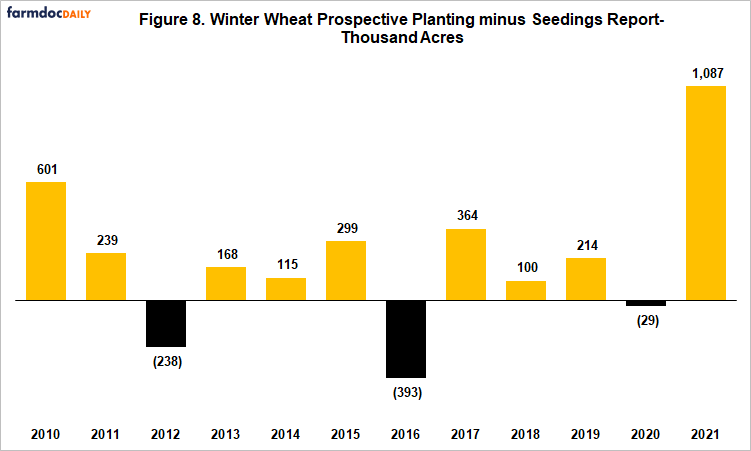 Multiple factors will dictate the size of 2021 corn and soybean crops in 2021. A derecho and a late season drought in the Midwest reduced the size of the 2020 crop after lofty expectations associated with planting progress and near perfect growing season weather through June. Fewer acres all else equal should result in smaller crops. The balance sheets for corn and soybeans continued to grow tighter throughout the winter on relatively strong demand and reduced supply. Lower than expected acreage in the Prospective Planting report had an impact on futures markets, and as expected a larger impact on deferred futures contracts. Figures 9 and 10 illustrate the market carry between contract months for corn and soybeans, respectively. Market carry refers to the difference in price between two delivery months. The market uses market carry to signal when it needs grain from producers. A positive carry in the market tells the producer grain is likely to be in greater demand in the future, whereas a negative market carry tells the producer grain is in greater demand today than it is expected to be in the future.  Futures contracts for corn and soybeans at the close of trading on March 30, 2021 had a negative carry all the way into the next marketing year indicating the need for grain now was greater than the expected need for grain in the future. After the reports showed smaller expected acreage for corn and soybeans all futures contracts increased, but it was the deferred contract months that unsurprisingly increased the most. Market carry can be a powerful tool to gauge the markets expectations for availability of grain and oilseeds in the future. 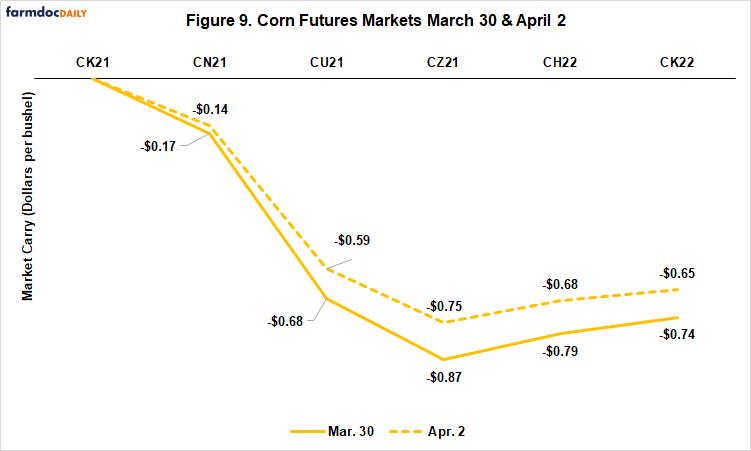 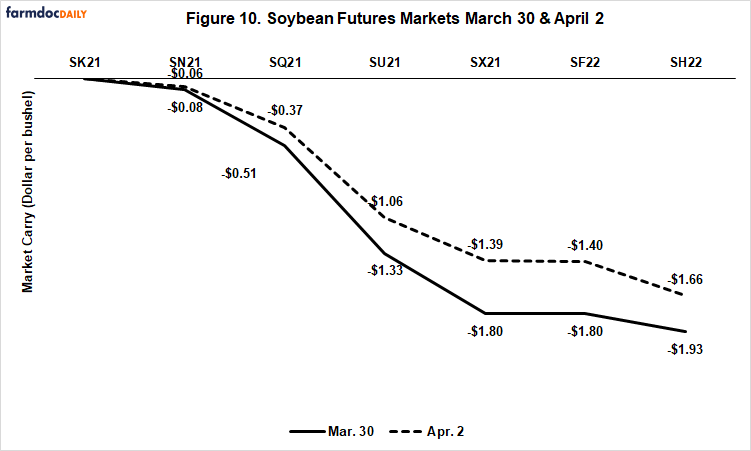 Compared to pre-report expectations, March 1 grain stock for corn, soybeans, and wheat fell within the range of expectations. A downward revision for December 1 corn stocks continues to provide concern regarding the size of the 2020 US corn crop. Corn used for feed and residual use remained strong in the second quarter of the 2020/21 marketing year. Implied first half feed and residual use as a share of expected use for the marketing year is historically strong at 77%. The share of March 1 on-farm stocks is not statistically different from previous years.

The 2021 Prospective Planting report shocked grain and oilseed markets as total principal crop acres of 316.1 million acres remained below the 2014 to 2018 average of 317.8 million acres. Market analysts overestimated corn and soybean acres in the same year for the third time since 2005, causing futures prices to increase the entire one-day limit directly following the report’s release. Historical analysis of acreage changes between the June Acreage and March Prospective Planting reports suggests with continued favorable prices for corn and soybeans an additional 1.5 million acres may be possible in 2021. States in the Upper Plains are the most likely to see additional acres of principal crops. Prices for fall delivery appear appropriate given the pace of consumption through the first half of the 2020/21 corn and soybean marketing year and intended 2021 acreage. Market attention turns now to spring weather and planting progress in the US and Europe as well as growing weather for the safrinha corn crop in Brazil.