The U.S. Congress is debating two sets of new legislation that would impact the tax on farmer estates and inherited gains, indicative of the momentum for changes to the current code for estate, gifts, and generation skipping taxes. Both pieces of legislation could have significant impacts for middle class business owners like farmers. The first – For the 99.5% Act – would require more estates to pay estate tax by lowering the estate tax exemption level and would increase the estate tax rates resulting in larger amounts of estate tax to be paid. The second piece of legislation, the Sensible Taxation and Equity Promotion (STEP) Act, would have two impacts on farmers if passed as currently understood.  First, removing the automatic step-up in basis provisions at the time of death creating the potential for more tax.  Second, a new transfer tax instituted in the STEP Act would apply to transfers of property in a farm estate at death and transfers during a lifetime.

A capital asset is a significant piece of property whose useful life is more than a year. For a business, a capital asset provides services over the life of the asset and is not a normal product of the business. Land, machinery, tile, grain bins, buildings, and breeding livestock are all examples of capital assets for a farm. When a business sells a capital asset for more than the price paid to purchase the remaining taxable basis on the property, the difference is taxed as a capital gain.

The automatic step-up in basis to fair market value also applies to assets contributing to the value of an estate at death (IRS). The value of lifetime taxable gifts (see following paragraph) is added to the estate value to arrive at the final taxable value of an estate (IRS). The federal estate tax exemption level is $11.7 million for 2021, estates with a taxable value above this amount owe federal estate tax (IRS). When a person dies with an estate value below this amount, they may elect to pass any of their unused exemption to the surviving spouse. For estates with value exceeding the exemption level, the first $1 million of the amount over is taxed at incremental rates from 18% to 39%. After $1 million over, the tax rate is 40% (IRS).

The current laws related to gift tax and estate tax give owners of large estates the opportunity to manage tax liability in life and after death. The annual gift tax exemption can be maximized to transfer property during a lifetime and lower what would be the taxable estate value. Certain types of trusts can also be used as a method for transferring assets. Often farm families will also utilize gift transfers to support a future generation of farm operators. For example, a gift of machinery to help a beginning farmer attain ownership or gifting grain as a tool to teach marketing the crop. 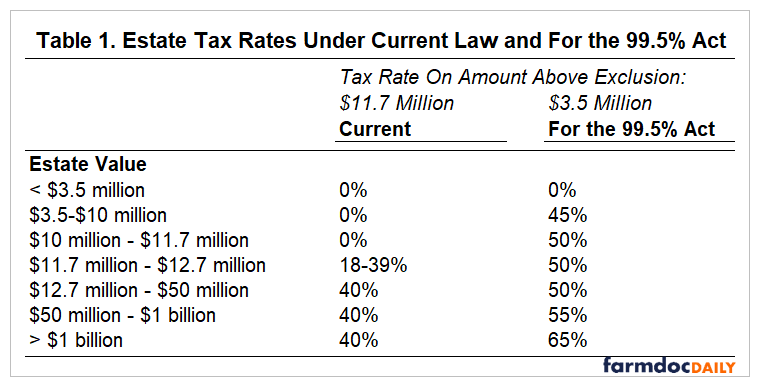 Importantly, the bill does acknowledge family farmers with a provision that allows farmers to lower the value of their farmland by up to $3 million for estate tax purposes and increase maximum exclusion for conservation easements (Sanders). Though a valuable provision for farmers, there will still be farm estates valued between $6.5 million ($3.5 million plus $3 million farmland value exclusion) and $11.7 million that do not owe estate tax under current law but would under this proposal.

The legislation would also impact other tax related rules, including those surrounding trusts used to pass wealth, the generation skipping tax, and valuation of assets for estate tax purposes.

A group of Senate Democrats including Senators Chris Van Hollen, Cory Booker, Bernie Sanders, Sheldon Whitehouse and Elizabeth Warren introduced the STEP Act in March 2021. Their goal is to tax unrealized income derived from wealth accumulation, particularly when someone dies with assets that increased in their lifetime (Van Hollen). This legislation creates what is effectively a new transfer tax on unrealized capital gains (Van Hollen).  The tax would apply to property transfers at death and throughout the person’s lifetime. Although this bill does propose a change in the valuation of capital assets at death by removing the automatic step-up in basis, it does not replace the current estate tax or gift tax laws, it would be a new tax in addition to those.

The bill allows for the first $1 million in unrealized capital gains from the transfer of assets to be excluded from this tax (and retains a separate exclusion for personal residences). The $1 million exclusion for gains from the transfer of assets is notably lower than the current $11.7 million estate tax exemption. As a result, the STEP Act would add a new, separate tax for estates with capital assets valued over $1 million but a taxable estate value under $11.7 million, which are currently not subject to such tax.

Under this proposal the transfer tax on unrealized capital gains is due at the time of the transfer and applies not only to transfers at death, but also to lifetime transfers to individuals (besides spouse) or trusts. Also important is that the proposed transfer tax does not appear to allow for a $15,000 annual gift exclusion per recipient that currently exists. Instead, the bill allows for an individual to utilize up to $100,000 of the $1 million transfer exclusion for lifetime gifts; this value is cumulative for gifts to all recipients and over all years. Once this amount is surpassed, any future gifts during a lifetime would be subject to the transfer tax. The amount of the gift would be reported by the giver in a manner as if it had been a sale at market value, therefore triggering (unrealized) capital gains on the “sale” of the gifted asset. This would impact farm families who gift assets such as machinery or grain as a way to help a future generation get involved in their farm business.

The bill would apply to transfers occurring after December 31, 2020 so, if passed, it would be retroactive to the beginning of this year. There is a provision that allows for the tax to be paid in installments, with interest, over a fifteen-year period for capital gains that apply to illiquid assets, like a farm or business (Van Hollen).

Farm Scenarios Under Current Law and Both 99.5% Act and STEP Act Proposals

The following scenarios are intended to provide examples of how potential changes could impact farmers. These are based on our interpretation and understanding of both pieces of prosed legislation as currently written. This may change as additional information becomes available that helps to clarify understanding or as draft legislation changes.

Scenario 1: Assume the fair market value of a farmer’s estate is $10 million with a collective cost basis of $4 million on property. The estate’s value includes more than $3 million of farmland that would be eligible for exclusion under the 99.5% Act. The farmer never made any gifts while alive.

Scenario 2: Assume the fair market value of a farmer’s estate is $13 million with a collective cost basis of $4 million on property. The estate’s value includes more than $3 million of farmland. The farmer never made any gifts while alive.

Proposals for new legislation that would make sweeping changes to taxes on farmer estates and inherited gains are a sign of the momentum that exists for changes to the current tax code. The legislators introducing these bills are aiming to target the nation’s “largest billionaires” (Sanders), but the changes could have significant impacts for some family farms. One proposal seeks to lower estate tax exemption levels and increase estate tax rates. The other piece of legislation would remove the automatic step-up in basis provisions at the time of death and create a new transfer tax – separate from the estate tax and gift tax – that would apply to transfers of property in a farm estate at death and gift transfers made during a lifetime.

Often farm families have farm assets that have been in the family for many generations. Over time the value of those assets has increased. Without an automatic step-up basis, some farm families may be forced to sell farm assets needed to operate the farm to pay the tax bill. Further, the changes proposed in these two pieces of legislation would not only eliminate the automatic step-up in basis, but also create a new, additional tax on property transfers at death and lower the federal estate tax exemption and increase the estate tax rate.

These proposals raise major philosophical questions. What should the role of the Federal government be in facilitating the transfer of business from one generation to another? What about small, family-owned businesses whose assets often surpass $3.5 million? For farmers and other small business owners those assets are also necessary for the operation of the business where the family members work and generate a labor-based income as opposed to the wealth-based income that the bills seek to target. There would be considerable impact on farms and other family businesses paying sizable capital gains tax and estate tax at each generation. Being forced to sell land or other assets needed to operate the business is likely among the implications of such changes.

In this article, we aim to summarize and inform based on our best understanding and interpretation of what is included in these bills. Farmers with estate plans created based on the current tax law should be prepared to make changes if these bills or similar legislation is passed. Seek assistance from an estate planning and tax law professionals for guidance.