Similar to our work last week (farmdoc daily, April 14, 2021), the analysis focuses on USDA planted acreage revisions between the March Prospective Plantings and the January Crop Production Annual Summary reports.  The January estimate is usually considered the “final” for a crop year.  Hence, the change in estimates between March and January is the most relevant measure of the total revision for a crop year to the market.

We begin by considering the relationship between USDA corn and soybean acreage revisions and price changes during the two-month period that immediately follows the release of the Prospective Plantings report.  Specifically, we collect new crop futures prices for corn and soybeans on three dates: i) the business day immediately following the release of the Prospective Plantings report, ii) the last business day of April, and iii) the last business day of May.  The day following the release of the Prospective Plantings report is used as the base for computing percentage price changes over the month of April and for the two-month April-May period.  A monthly percentage price change for May is also computed.  We argue that the April-May period brackets the period when the vast majority of adjustments in corn and soybean acreage decisions can be made in response to price changes.

Figures 1 and 2 show revisions to USDA planted acreage estimates for corn and soybeans, respectively, and new crop futures prices changes in April-May over 1990-2020.  Based on the economic theory of supply, we would expect positive price changes for each crop to lead to larger acreage planted, all else equal.  It turns out there is no evidence of a statistical relationship, with the R2 in both cases of essentially zero.  New crop futures price changes over April-May have no ability to predict USDA corn and soybean acreage revisions.  We also considered April and May price changes separately and found basically the same result. 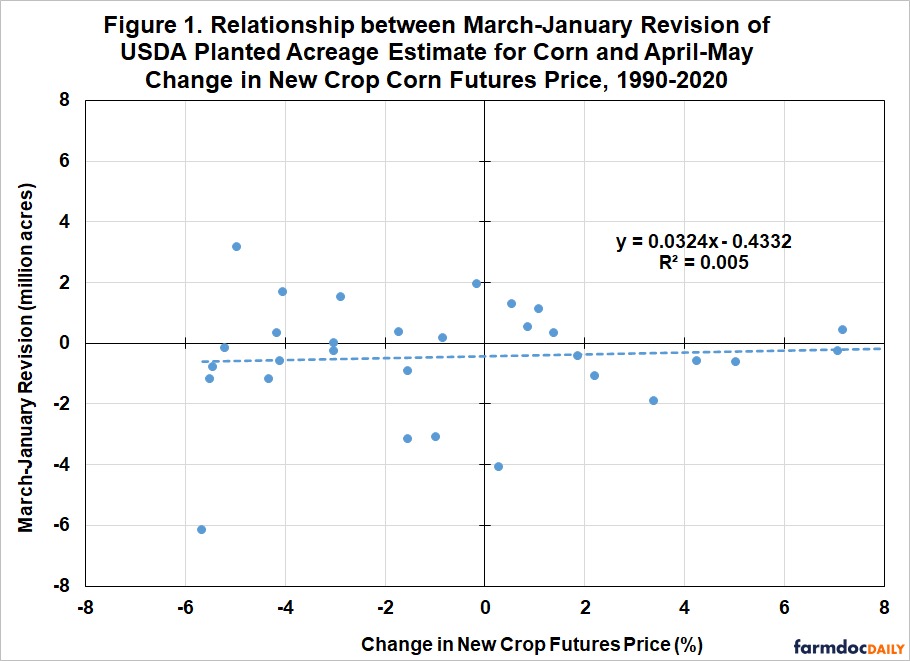 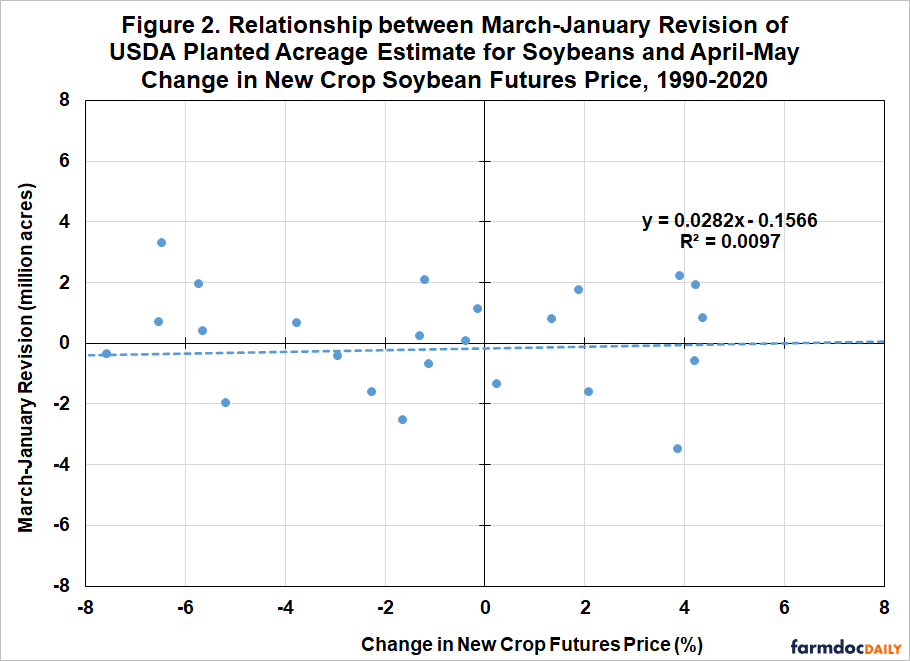 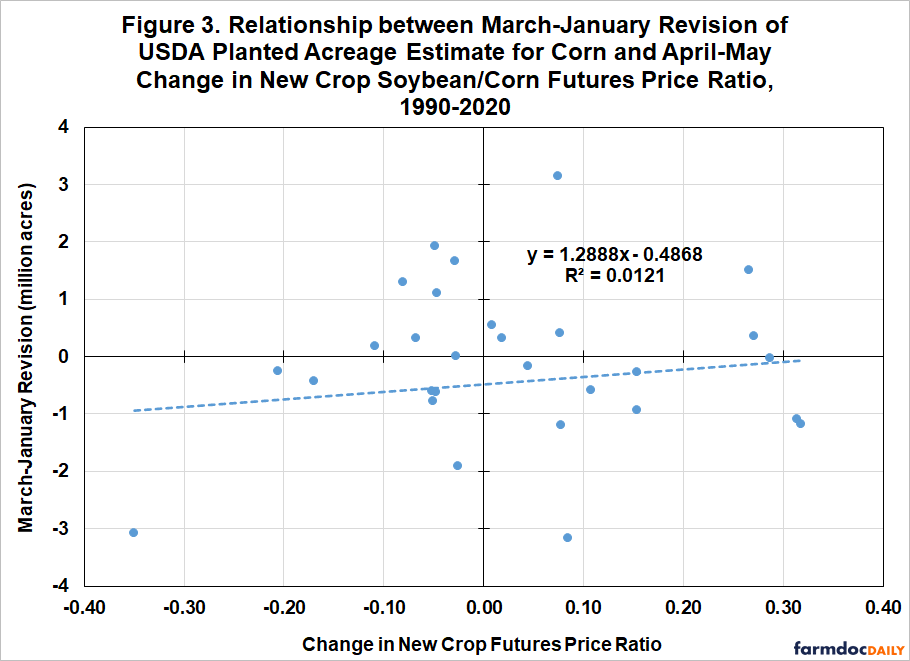 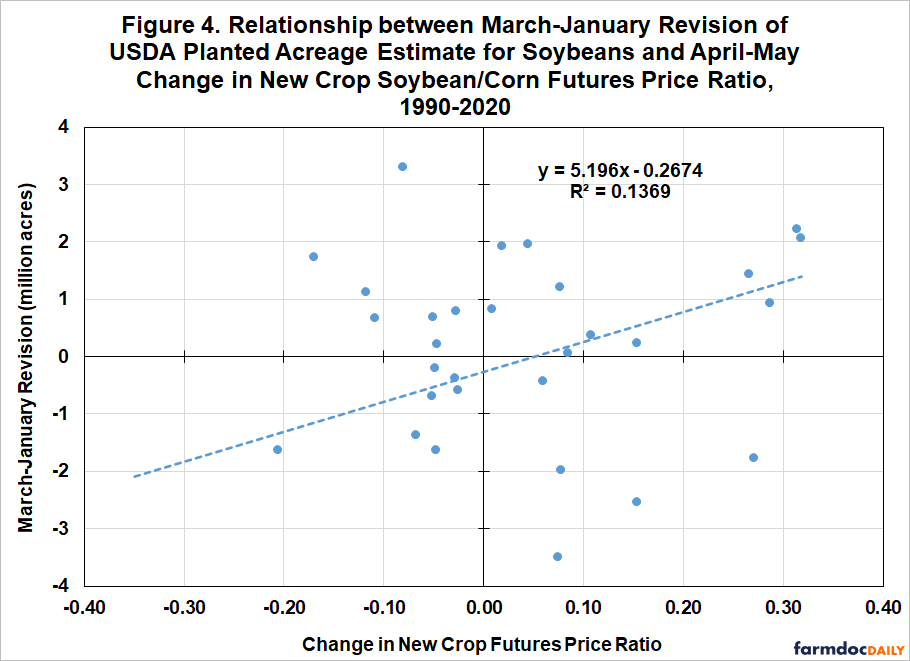 Figure 5 shows the estimated relationship between corn acreage revisions and planting progress.  There is indeed a positive and statistically significant relationship between corn planting progress and acreage revisions.  The estimated slope coefficient of 0.0822 implies that 10 percent faster than normal planting progress leads to an 822,000 acre increase in the area planted to corn.  A caution is that the R2 for this regression is still fairly modest at 29.5 percent, which means that a wide range of acreage revisions is possible for each level of corn planting progress.  The explanatory power does rise to 48.6 percent if the 2020 observation is deleted.  This is the observation far below the other data points in Figure 5.   In 2020, most of the U.S. corn crop was planted in a timely manner and this explains the above average planting progress.  However, planting was delayed considerably in the Dakotas and this led to substantial prevented planting acres in those states, which in turn helped to pull down the U.S. planted acreage estimate after March. 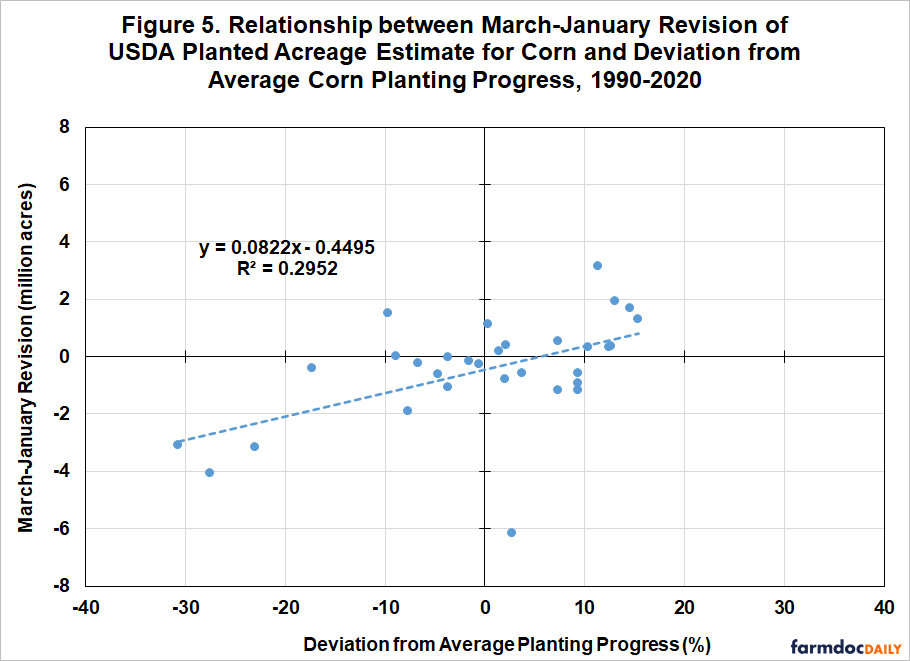 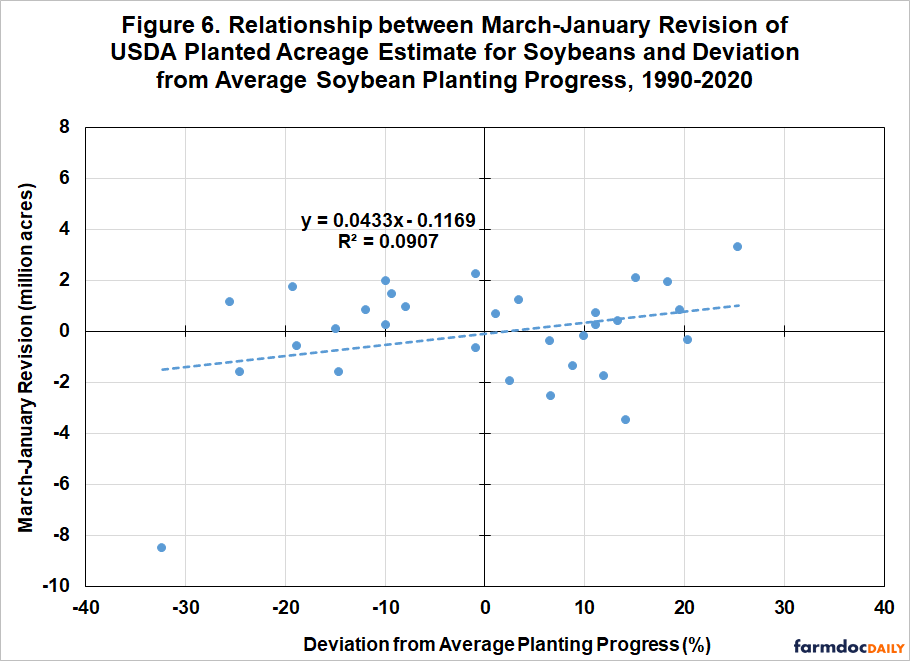