The USDA released the 2021 Prospective Plantings report on March 31st.  The report indicated that U.S. farmers this year intended to plant 91.444 million acres of corn, 87.6 million acres of soybeans, and 316.2 million acres for all principal crops.  These estimates sent shockwaves through the grain markets.  Futures prices for both crops did not take long after the report was released to move up the daily allow limit, a very unusual occurrence.  A farmdoc daily article last week (April 7, 2021) showed that the key to understanding the market reaction was the size of the combined acreage surprise for corn and soybeans, which was the largest of the last 39 years.  There has been much discussion since the Prospective Plantings report was released about the potential for USDA acreage estimates to increase in subsequent reports.  The purpose of this article is to provide historical perspective on the average size and variation over time in USDA revisions to planted acreage estimates for corn, soybeans, and all principal crops.  This should provide a benchmark for developing expectations of potential changes in USDA planted acreage estimates for 2021.

The analysis here focuses on USDA planted acreage revisions between the March Prospective Plantings and the January Crop Production Annual Summary reports.  The January estimate is usually considered the “final” for a crop year.  Hence, the change in estimates between March and January is the most relevant measure of the total revision for a crop year to the market.

Figures 1, 2, and 3 show revisions to USDA planted acreage estimates for corn, soybeans, and combined corn and soybeans, respectively, over 1990-2020.  Revisions are computed as the January estimate minus the March estimate, so positive numbers mean that planted acreage estimates increase between March and January, and vice versa.  The first thing to notice is each chart is how close the average revision is to zero.  There is a very slight bias towards negative revisions (declining acreage estimates) in all three cases, but none is significantly different from zero.  From a statistical standpoint, the data indicate that the average revision for corn, soybean, and combined soybean and corn planted acreage is equal to zero.  This is exactly what you would expect from a statistical revision process that is unbiased. 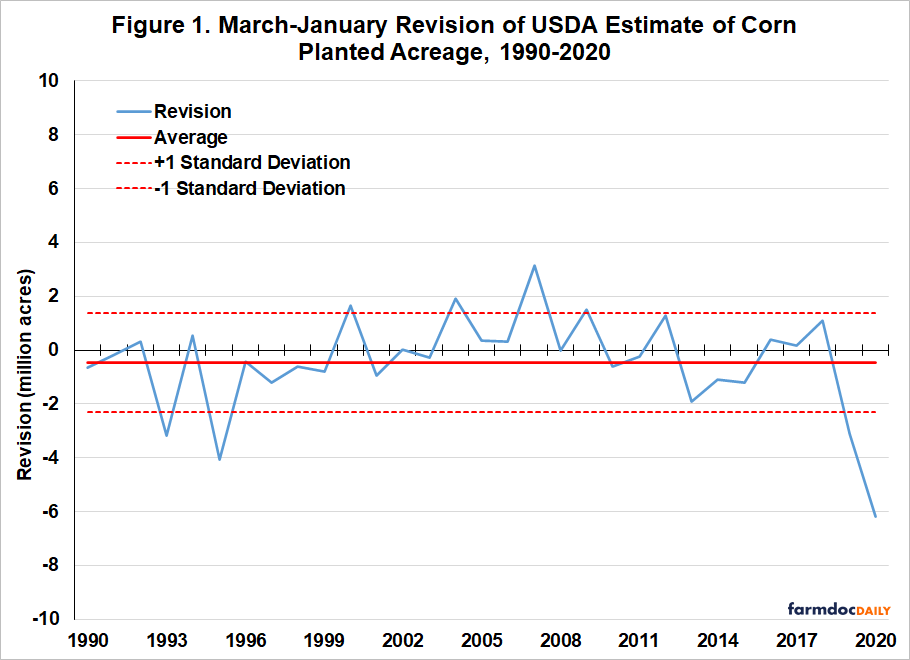 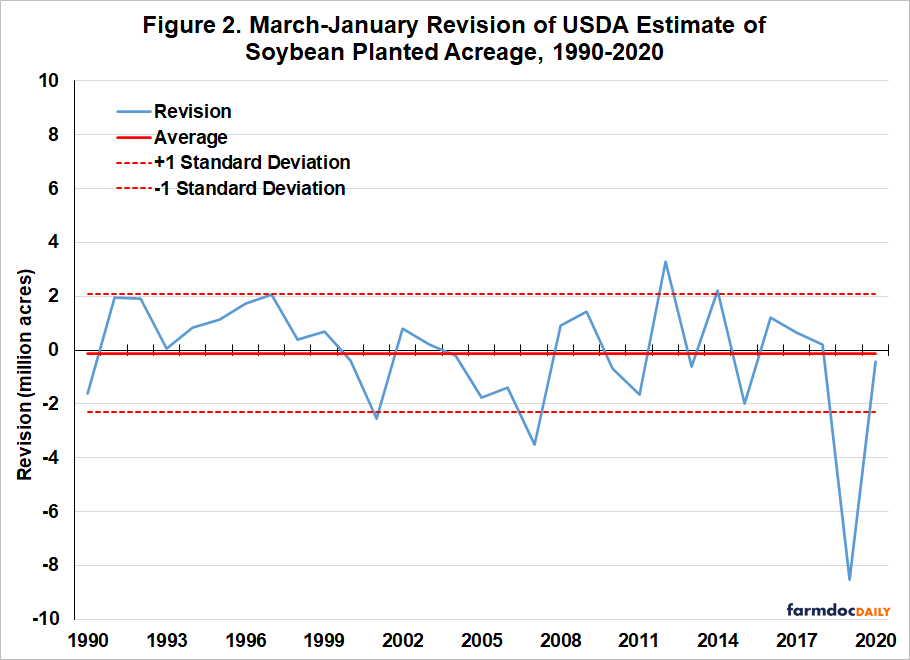 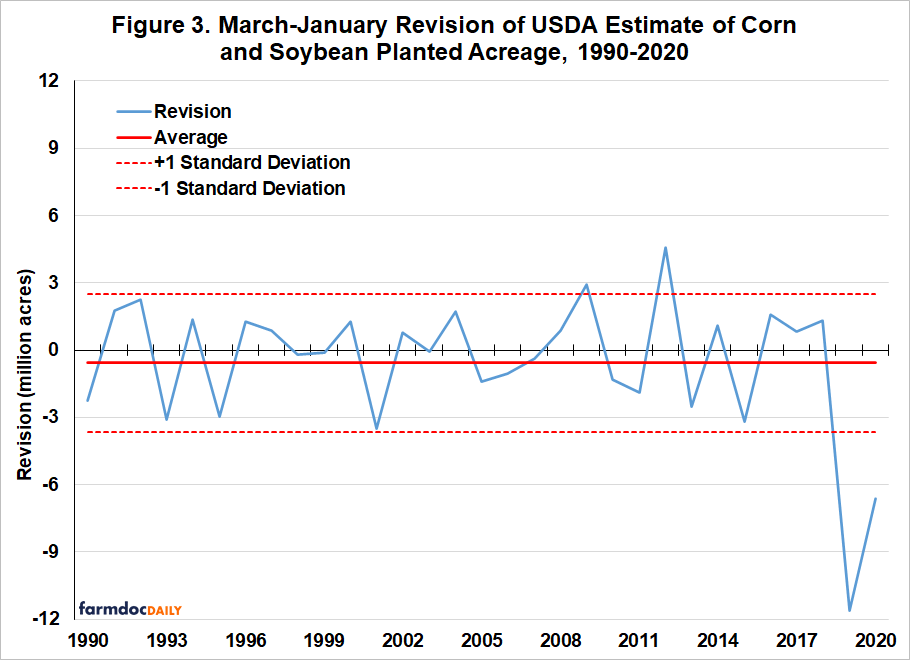 The band for combined corn and soybean acreage is roughly plus/minus three million acres, which is less than the sum of the bands for the individual crops.  This occurs because the acreage revisions for corn and soybeans have a tendency to partially offset one another in a given year.  Finally, the bands illustrate the unusually large acreage revisions in 2019 and 2020 due to very wet spring weather and planting delays. 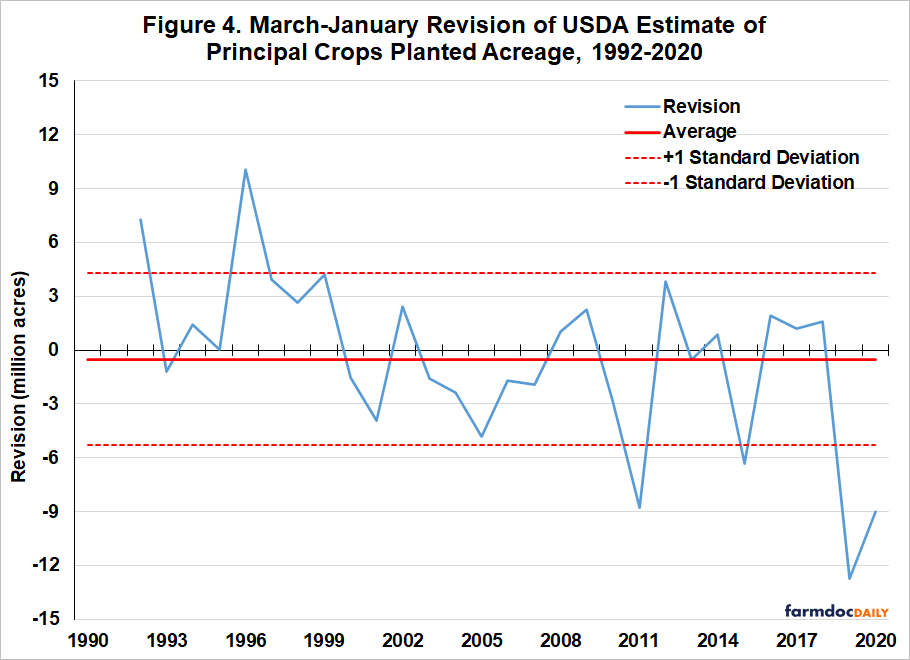 Figure 4 indicates that the average acreage revision is again very close to zero, so it can be concluded that USDA revisions of principal crop acreage are unbiased.  The one standard deviation band for principal crops acreage is roughly plus/minus five million acres, showing that total crop acreage can swing fairly substantially from the first to the final estimate.

There are two remaining issues that need to be explored.  The first is the question of whether there is a pattern to the revisions over time.  That is, do positive revisions in one year tend to be followed by positive revisions in the following year, and vice versa?  The correlation between the previous year’s revision and the current year in all cases is close to zero and statistically insignificant, which implies that the revisions are random from year-to-year.  This is actually what one should expect from an efficient statistical revision process.  The second issue is how much of the total revision over March-January occurs in March-June compared to June-January?  This amounts to asking how much of the total acreage revision is revealed in the June Acreage report.  As an example, Figure 5 shows the relationship between the March-June acreage revision for corn and the total March-January revision.  The R2 for the regression is 88 percent, which shows that all but a small proportion of the total revision is revealed in the June Acreage report.  The same regression for soybeans, combined corn and soybeans, and principal crops has an R2 of 77, 83, and 75 percent, respectively.  It is not surprising then why the June Acreage report is considered to be such an important event by the market. 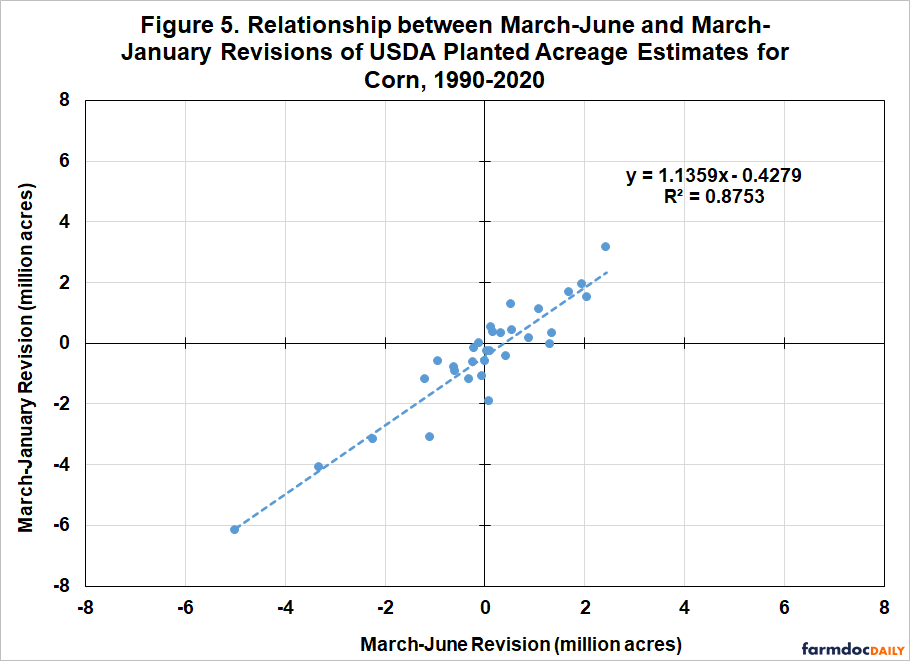 Irwin, S. "Just How Surprising Was the Prospective Plantings Report for Corn and Soybeans?" farmdoc daily (11):55, Department of Agricultural and Consumer Economics, University of Illinois at Urbana-Champaign, April 7, 2021.