The harvest-time futures contracts for corn and soybeans continue to trade at levels well above those experienced since 2013.  In a recent article (farmdoc daily, May 11, 2021), we used the farmdoc Price Discovery Tool to illustrate downside price risk based on market-based assessments at that time.  Today’s article extends this analysis to consider downside risks, and upside potential, associated with harvest revenue using simulation methods tailored to a central Illinois scenario. Increased price volatility relative to recent years and continued uncertainty surrounding crop yields result in the potential for significant revenue declines from current expectations.  Still, the chances of high revenue levels providing excellent returns for 2021 are quite likely.

Simulation methods are used to model a typical commercial grain farm in Champaign County, Illinois.  Settlement prices for the 2021 harvest contracts (December for corn, November for soybeans) along with option prices as of June 14th, 2021 were used to define lognormal price distributions from which 5,000 prices for corn and soybeans were drawn.  The expected harvest prices are $5.81 for corn and $13.95 for soybeans. Price volatilities – measures of price variability – are 28% for corn and 15.5% for soybeans.

Trend yield estimates of 200 bushels per acre for corn and 65 bushels per acre for soybeans were assumed based on historical yield data for Champaign County.  Crop insurance rates for Champaign County were used to define Weibull distributions from which 5,000 random corn and soybean yields were drawn. Just like options prices reflect the volatility of prices, crop insurance rates can be used to reflect the potential volatility or variability in crop yields.

Finally, negative correlation between the simulated harvest prices and yields was imposed to account for the historical relationship between realized yields and prices. Negative correlation recognizes the fact that price tend to move down (up) when production levels are high (low). This results in below average yields tending to be paired with above average prices, and vice versa.  Each of the simulated yields and prices were then multiplied together to provide a distribution of 5,000 potential revenue levels that could be realized at harvest based on market-based assessments of variability in prices (futures and options) and yields (crop insurance rates).

Figure 1 shows the probability distribution of harvest corn revenues based on the simulation. Expected harvest revenue for corn is just over $1,100 per acre, which can be seen in Figure 1 from the bars around $1,100 being in the middle of the distribution and having the greatest likelihood (bars are the highest).  The spread in the distribution provides a sense of how likely revenue levels below (or above) the expected revenue might occur.  Revenue levels become less likely the further they move away from, below or above, the expected level.  Figure 1 illustrates that, while relatively unlikely, harvest revenue levels below $500 per acre are possible based on current market assessments for prices and potential yield variability in Champaign County. Corn revenues approaching $2,000 per acre are also possible, but relatively unlikely. 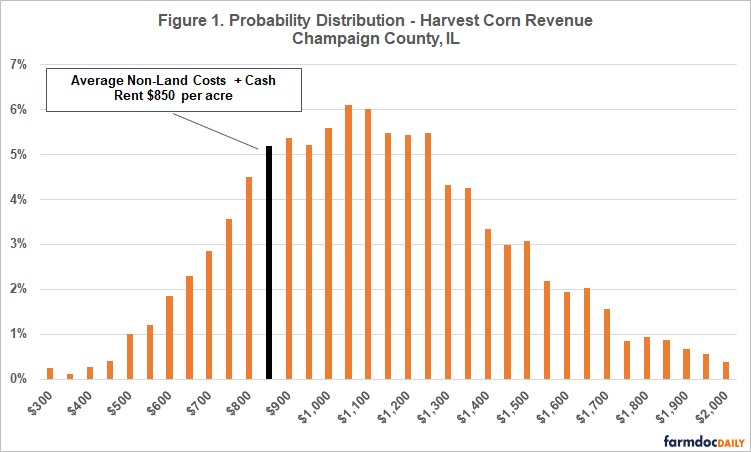 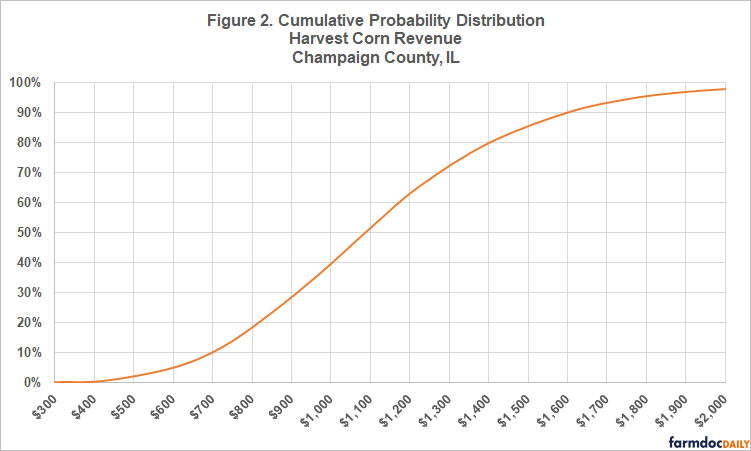 The simulation for Champaign County corn revenue without insurance suggests:

(Note: $750 per acre would be around the lowest average revenue level for corn in central IL since 2013)

(Note: $850 per acre is roughly equal to total non-land costs plus cash rents for corn in central Illinois based on the most recent 2021 crop budgets)

To illustrate how crop insurance might impact the downside risk associated with harvest revenue, an 85% Revenue Protection (RP) policy was also considered using the 2021 projected price of $4.58 and trend-adjusted Actual Production History Yield (TA-APH) of 200 bushels per acre.  This provides a minimum revenue guarantee of $779 acre (0.85 x $4.58 x 200).  The guarantee could increase if the harvest price exceeds the projected price. Since futures are currently trading well above the projected price, the chances of guarantee increases for RP policy is relatively high (roughly 20-25%) compared to the price discovery period in February when markets were lower. This has the effect of reducing chances of low revenue levels:

The probability distribution for simulated soybean revenue is provided in Figure 3.  Expected soybean revenue is roughly $900 per acre.  The revenue outcomes from the simulation exercise range from less then $300 per acre to more than $1,500 per acre.  While revenues well below, or above, the expected level are possible they become less likely the further from expected revenues they become. 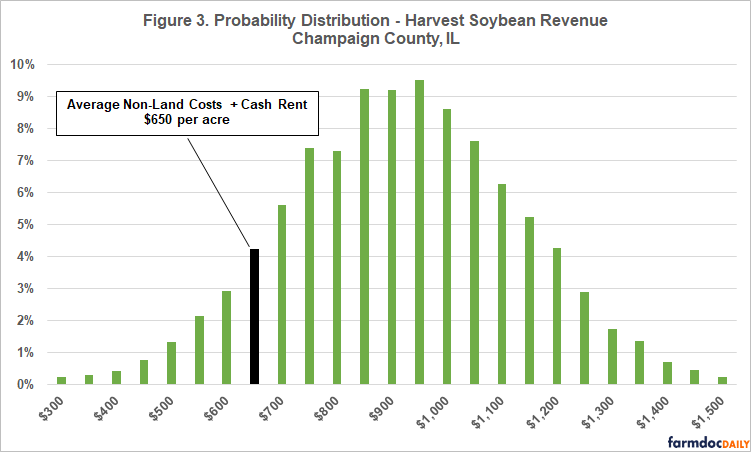 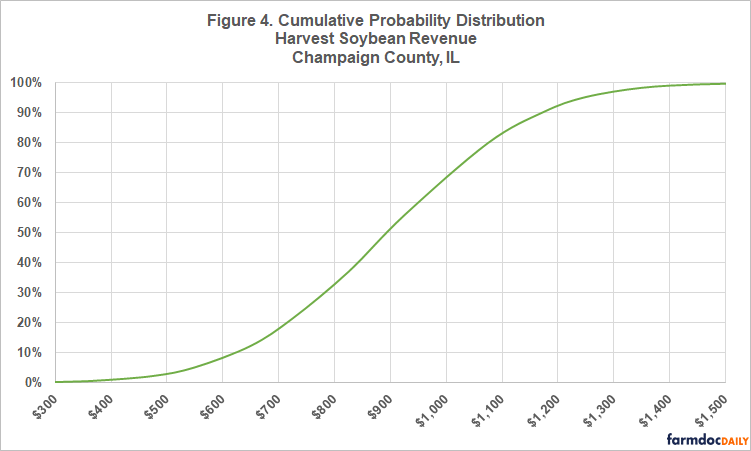 (Note: $800 per acre was the record-high average revenue for soybeans in central Illinois in 2013)

In terms of downside risk, there is 12-14% chance that harvest revenues could be below even some of the lowest levels experienced since 2013 ($750 per acre for corn; $650 per acre for soybeans).  In those cases, crop insurance protection would be highly likely to trigger support to offset those revenue declines. In terms of upside potential, the likelihood that revenues could exceed even the highest levels experienced during the last farm income boom are 37% for corn (above $1,200 per acre) and 67% for soybeans (above $800 per acre) .