We have outlined the process of estimating total U.S. crop land acreage in several previous farmdoc daily articles (April 4, 2014; April 9, 2014; April 2, 2015; January 21, 2016).  It is no simple matter to account for total crop acreage because of movement in and out of government acreage programs and the fact that available data is from different USDA agencies.  We start our estimates in 1998 as this avoids accounting for annual set-aside acreage in earlier years and allows full adjustment to the planting flexibility that was first allowed in the 1996 “Freedom to Farm” bill.

The first component in the accounting of total crop acreage is principal crop acreage.  As identified by the USDA in the most recent Prospective Plantings report:

Note that in our previous work on total crop acreage (e.g., farmdoc daily, January 21, 2016), we estimated double-cropped acreage and reported that separately from non-double cropped acreage.  We do not do that here in order to simplify the analysis.  Hence, double-cropped acreage is included in the principal crop acreage totals reported below.  Finally, principal crop estimates used here are the latest available for each year as found in the USDA Quick Stats database. 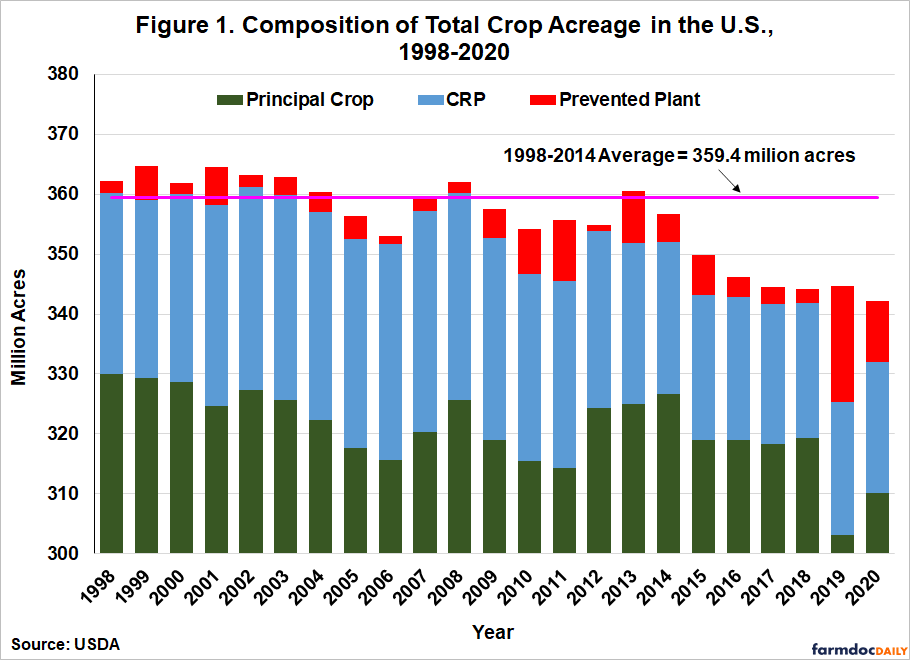 The second component of the accounting of total crop acreage is acreage enrolled in the Conservation Reserve Program (CRP).  A January 2021 fact sheet from the USDA indicates that:

“To be eligible for the CRP general enrollment period, land must be cropland (including field margins) that is planted, or considered planted, to an agricultural commodity four of the six crop years from 2012 to 2017, and be physically and legally capable of being planted (no planting restrictions due to an easement or other legally binding instrument) in a normal manner to an agricultural commodity. Alfalfa or other multiyear grasses and legumes grown in a rotation not to exceed 12 years may also be eligible.” [p.1]

The eligibility criteria make it clear that in order to be enrolled in the CRP that agricultural land must have been used for crop production for a sustained period in the recent past.  The total acreage enrolled in the CRP over 1998 through 2020 is represented by the blue bars in Figure 1.  These annual totals reflect acreage enrolled as of November 1 in the previous calendar year (as reported by the USDA’s Farm Service Agency (FSA).  Enrollment has steadily declined from a peak of 36.8 million acres in 2007 to a low of 21.9 million acres in 2020.

The third component of the accounting of total crop acreage is prevented plant acres.  Federal crop insurance programs include a feature in most policies that triggers payments when extreme weather conditions prevent the planting of insured crops.  The formal definition of prevented planting provided by the Risk Management Agency (RMA) of the USDA is as follows:

The net result of adding principal crop acres, CRP acres, and prevented plant acres is an estimate of total crop land acres for the U.S.  This is represented by the top of the bars found in Figure 1.  The total was relatively stable over 1998-2014, varying by roughly +/- 5 million acres from the average of 359.4 million.  It is especially interesting to observe that total crop acreage was essentially fixed during the ethanol boom years of 2007-2013.  This makes the decline in total crop acreage after 2014 all the more interesting.  Total acreage declined from 356.7 million in 2014 to a low of 342.2 million in 2020, a decline of 14.4 million acres.  It appears that total crop acreage is much more sensitive to crop price declines that crop price increases, at least in the U.S.

As indicated in our previous farmdoc daily articles on this topic, it is important to recognize that several non-price factors may contribute to the estimated variation of total crop acreage over time.  One factor that may contribute to a small part of annual variation in principal crop acreage is that acreage of principal crops includes double counting of acreage of a failed crop that is replanted to a different crop.  There may be small variations in that total from year-to-year.

A second factor that may contribute to annual variation is some “noise” in non-principal crop acreage.  The CRP acreage used here, for example, is the acreage enrolled in the program as of November 1 in the year prior to spring planting.  Actual CRP enrollment may have differed slightly from those estimates in some years.  In addition, the proportion of the acreage that came out of the CRP, but was not cropped in the following year may have varied from year-to-year.  Additionally, planted acreage of non-principal crops is not included in the estimates shown in Figure 1.  Acreage of those crops varies some from year-to-year, which could account for a small part of the differences in total acreage from year-to-year. 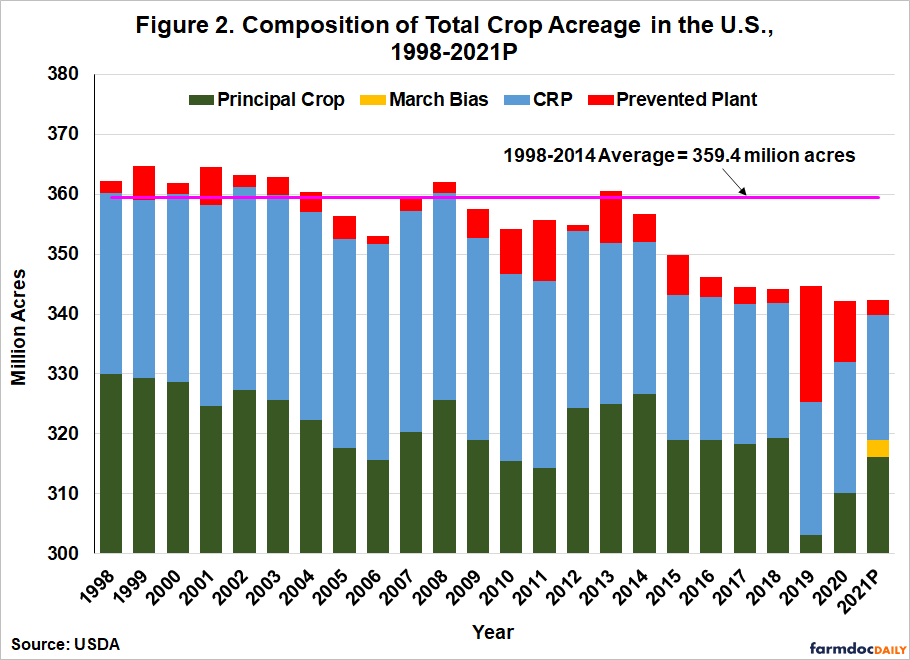 An important and often under-appreciated factor when anticipating acreage of crops planted each year is the total acreage base, or the size of the “acreage pie.”  This is especially important this year given the surprisingly low estimates of corn and soybean planted acreage in the March Prospective Plantings report.  There has been much speculation about the possibility of USDA corn and soybean planted acreage estimates increasing in the upcoming June Acreage report.  Estimates of planted acreage for corn in the trade have been reportedly as large as 97 million acres, almost 6 million more than the March USDA estimate.  Whether increases of this magnitude actually occur will likely depend on corresponding increases in the estimated total size of crop acreage.  We account for a downward bias in March principal crop acreage estimates when projecting total crop acreage in 2021, but our estimate is still only slightly larger than last year.  It appears that any large increases in corn and soybean planted acreage will have to come mainly at the expense of other principal crops.

Irwin, S. "Just How Surprising Was the Prospective Plantings Report for Corn and Soybeans?" farmdoc daily (11):55, Department of Agricultural and Consumer Economics, University of Illinois at Urbana-Champaign, April 7, 2021.