Soybeans prices are selling at highs in Brazil because of strong internal and external demand, rising prices on the Chicago Mercantile Exchange, and a weak Brazilian real couple with a strengthening U.S. dollar. Prices have risen at the same time that Brazil, the world’s largest soybean producer, has achieved a new record harvest. The 2020/2021 forecast indicates Brazil will harvest 4.97 billion bushels, 8.5% more soybeans than last season. In addition, Brazil´s soybean exports increased dramatically in the last months, reaching historic highs, including unusual sales to the United States.

The average monthly cash price received by farmers for soybeans in Paraná, the second-largest soybean-producing state in Brazil, increased 66.8% from June 2020 to May 2021, according to data from the Center for Advanced Studies in Applied Economics of “Luiz de Queiroz” College of Agriculture at the University of São Paulo (see Figure 1).

The historically high soybean prices in Brazil this year is correlated with highs in soybean prices on the Chicago Mercantile Exchange (CME). Soybean futures traded in Chicago were the most expensive since June 2013, surpassing $15 per bushel in U.S dollars. Among the factors for the increase are low stocks of soybeans in the United States, rain in Argentina that hampered the harvest and the soybean acreage surprise for USDA Prospective Plantings Reports (see farmdoc daily April 7, 2021).

A surge to eight-year highs in Chicago soybean prices is also boosting American farmers’ incomes, after many years of narrow margins. In 12 months, the average monthly cash price received by farmers for soybeans in Central Illinois increased 78%, jumping from $8.40 per bushel in May 2020 to $14.94 per bushel in April 2021 (see Figure 2).

Besides, the 2021 projections are high relative to historical prices. The May World Agricultural Supply and Demand Estimates (WASDE) report contains a projection of $13.85 per bushel for soybean average prices in marketing year from September 2021 to August 2022 (see farmdoc daily May 18, 2021). Currently, USDA is projecting a supply and demand situation that will result in very tight ending stocks at the end of the 2021 marketing year.

Tightened U.S. soybean supply, a result, in part, of higher export volumes and lower stocks, pressured prices up in the last few months. In addition, the recovery from African swine fever and restocking in China raised the global demand for soybeans. For example, the ending stocks in relation to global consumption in 2020/21 are the lowest percentual since 2013/2014, according to Foreign Agricultural Service from USDA.

Tighter world crop supplies stand in contrast to the glut that capped trading margins in recent years in Chicago. One example of this unusual time is that Brazil very seldom sells soybeans to the United States. However, in May, Brazil shipped to the United States 100 thousand tons (3.67 million bushels), according to Cargonave, an independent shipping group in Brazil.

In addition, forecasts from the Cogo Agribusiness Intelligence, a Brazilian private consultancy, estimates the shipment of an additional 300 thousand tons (11.02 million bushels) in June. The last time the United States bought a large volume of soy from Brazil was in 2014, when there was a historic drought caused by La Niña.

After a delay in the soybean harvest in Brazil this season, leading to the lowest February exports in three years, Brazil reached new records in the following months. From January to April, shipments totaled 33.6 million tons, breaking the old record of 31.9 million tons reached in the first four months of the year in 2020, according to data from the Ministry of Agriculture, Livestock and Supply.

Also, in April the country sold 17.38 million tons of soybeans, the highest monthly total ever. The shipments were 17% higher than the 14.8 million tons exported in April 2020, which was, until then a record (see Figure 3). China bought 70% of the total soybeans exported in this period. 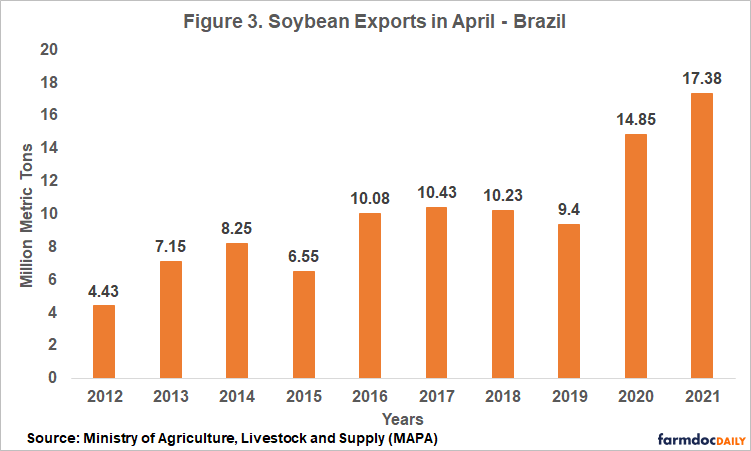 In the same month, the Brazilian agribusiness exports achieved a new record, reaching for the first time the amount of $13.57 billion, according to data from the Ministry of Agriculture, Livestock and Supply. The growth was 39% in relation to exports in April 2020. In no month of April of the historical series, which began in 1997, the export value has exceeded the US $ 10 billion mark.

The current forecast – for 86.0 million tons of soybean to be shipped in the period from October 2020 to September 2021 – requires exports from February to September to reach a record 81.8 million tons, 4.4 million tons ahead of 2020 (USDA, 2021). Getting to that number, in the face of the current global scenario, is not unlikely based on what has taken place the first five months this year.

The cash price received by Brazilian farmers for soybeans in April and May this year broke all records, since 2012. A strong internal and external demand, a surge to eight-year highs on the Chicago exchange, and a weak Brazilian real created a favorable outlook for farmers this season. Prices have risen at the same time that Brazil has achieved a new record harvest, with historical yields. In addition, Brazil’s soybean exports rose to new highs, including large shipments to the United States. With global demand remaining high in the months to come, as well as tight stocks in the United States, it is expected that the soybean market will continue to appreciate in Brazil.

Irwin, S. “Just How Surprising Was the Prospective Plantings Report for Corn and Soybeans?.” farmdoc daily (11):55, Department of Agricultural and Consumer Economics, University of Illinois at Urbana-Champaign, April 7, 2021.