Brazil is projected to retain its position as the largest soybean producer over the next decade. In the 2020/21 season, Brazil produced a record of 4,994 million bushels of soybeans, up 8.9% from last season’s record crop of 4,587 million bushels, according to data from the National Supply Company (Conab). The area harvested this season is also at a record of 95.16 million acres, up 4.2% from last season. The growth Brazilian acres are expected to be continue higher than the United States and Argentina, two of the other major producers of soybeans. In addition, recent advances in logistics, such as on the railroad called the North-South, should create opportunities to improve competitiveness in the transportation sector.

In recent years, Brazil surpassed the United States as the world’s largest soybean producer. In the future, Brazils grain production is projected to outpace that of the United State. The Ministry of Agriculture, Livestock and Supply (MAPA) projects that Brazil will produce 5,751 million bushels of soybeans in 2030, an increase of 15.2% compared to the 2020/21 crop (see Figure 1). In the United States, production should reach 4,905 million bushels in 10 years, an increase of 18.6% in the same period, according to the U.S. Department of Agriculture (USDA).­­ 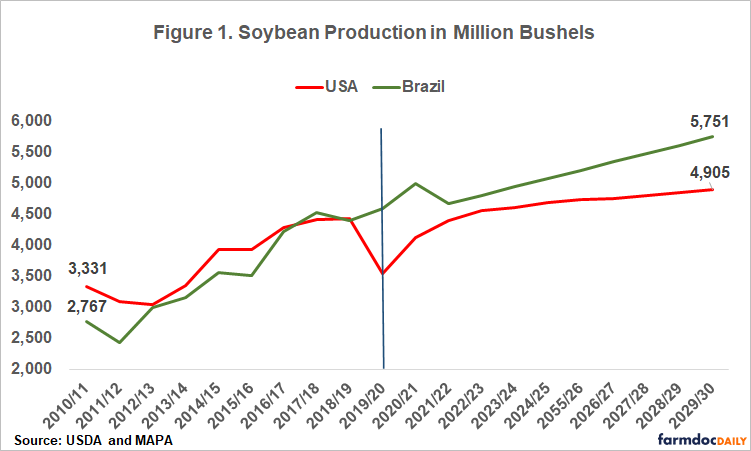 Brazilian soybean acreage is expected to grow 27% in the next 10 years, reaching 116 million acres, according to MAPA. Meanwhile, the USDA expects that the planted area in the U.S. will reach 90 million acres in 2030, an increase of 8.3% in 10 years. The growth rate of soybean planting in Brazil in the coming years will be lower than in the last decades, when there was an large increase in production (farmdoc daily, March 30, 2021).

Currencies have played an important role in soybean competitiveness in recent years, as the strength of the U.S. dollar has resulted in higher margins in South America. The Brazilian soybean 2020/21 crop, for example, produced the highest profits in the nation’s history because of low domestic supplies and the depreciation of the Brazilian real relative to the U.S. dollar.

Worldwide, costs, profit margins, logistics, and land availability will be key factors in determining future soybean production (Ikeda and Nazetta, 2020). Brazil has been able to maintain good profits and has land available; one challenge is the high cost associated with logistics, as will be discussed in this article.

The expansion of the area planted in soybeans in Brazil over the next decade is projected to occur as:

Farmers will expand mostly into the North and Northeast, especially in the Matopiba, a region formed by the Brazilian state of Tocantins and parts of the states of Maranhão, Piauí and Bahia. The Matopiba’s demarcation was carried out by the Brazilian Agricultural Research Corporation (Embrapa), that used the Cerrado areas (savannas) of the states as the main criteria. According to the territorial demarcation, there are about 73 million hectares spread across 337 municipalities. The “agribusiness hubs” are highlighted on the map (see Figure 2). 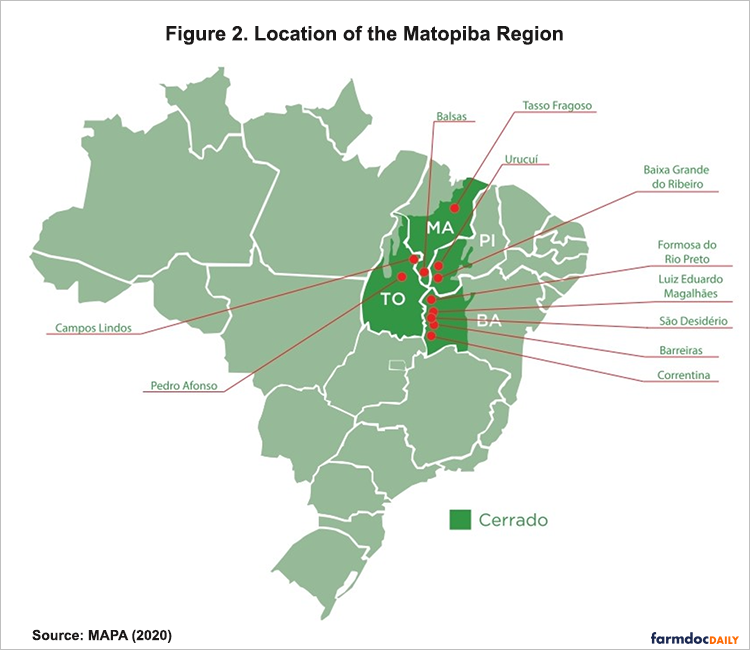 The main crop in the growing areas of Matopiba currently is soybeans. In 2020/2021, the soybean production in this region should reach 12% of the total harvest in the country. However, other crops like corn and cotton also have important roles. In the 2019/2020 crop, for example, the region produced 24.7 million tons of grains. In the next 10 years, the Brazilian government expects Matopiba to produce 32.7 million tons, an increase of 32.2% compared. The planted area is expected to increase to 22.1 million hectares, a growth of 14.8% over the decade.

The expansion of soybean to Matopiba occurred mainly due to the low cost of land, compared to the Midwest and the South of Brazil. The planting of soybean in Brazil originates in Rio Grande do Sul and Paraná (pioneer areas), southern states with a climate similar to the United States, where the first seeds came from until 1975. After that, the Embrapa started to develop seeds suited to the warmer climate of the savanna. As a consequence, in the 1970s and 1980s, soybean production migrated first to the Midwest: Mato Grosso do Sul, Mato Grosso and Goiás (largest areas). In the 1990s and 2000s, production migrated to the North and Northeast: Maranhão, Tocantins, Piauí, Bahia (Matopiba) and more recently to Pará (new frontiers).

Nowadays, the Matopiba and Pará state are considered the main agricultural frontiers in Brazil. The region has numerous favorable qualities for modern agriculture. The terrain is flat, with productive soil, a favorable climate (with long days and high sun intensity) and plenty of water available for irrigation. However, the biggest challenge is logistical, but that can be mitigated with the ongoing work on highways, railways, and ports.

Historically, the soybean-exporting industry in Brazil has relied on long-distance roads between the main producing regions and the ports. In the last decade, however, there has been large investment in the transportation infrastructure, not only for highways, but also for railways and waterways. From 2000 to 2019, truck market shares in soybeans shipped declined from 75% to 67%; at the same time, rail increased from 20% to 24%; and shipping by barge increased about the same amount, from 5% to almost 9% (Péra, Caixeta-Filho & Salin, 2021). 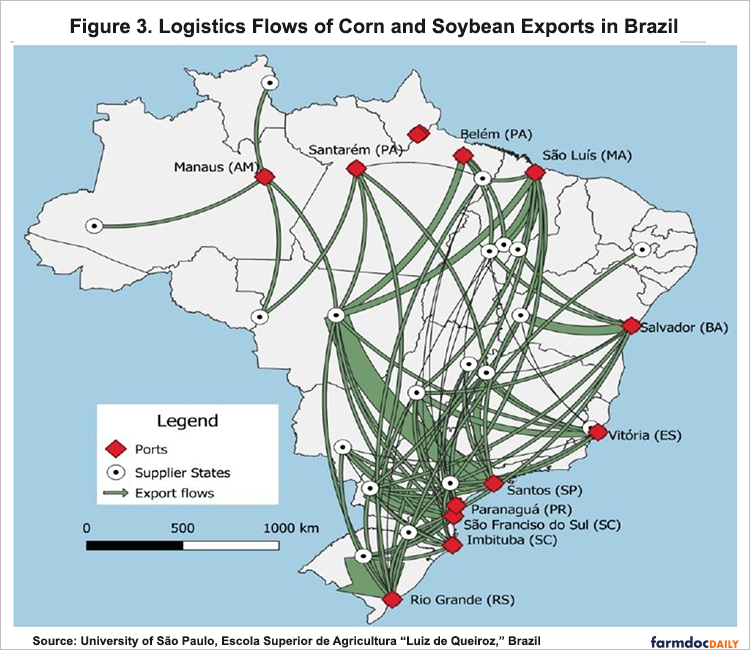 In 2021, the Brazilian government inaugurated 107 miles of the North-South Railway, connecting the state of Goiás (Midwest), to the Port of Santos, in São Paulo (Southeast). This project, begun in the 1980s, is projected eventually to include almost 955 miles of railways between Porto Nacional, in Tocantins state (North), to Estrela D’Oeste, in São Paulo state (Southeast). In addition, the project includes the construction of three railroad terminals in Goiás, Mato Grosso and Minas Gerais state, in the Central region.

The northern ports matched up to the southern ports in shipped grain cargo for the first time in 2020, according to information from National Waterway Transport Agency. The soybean and corn exports through northern ports over the past 10 years have increased almost fivefold, reaching 42.3 million tons in 2020, according to data from the Confederation of Agriculture and Livestock of Brazil (equivalent to American Farm Bureau Federation in the U.S.)

Despite recent advances, logistical challenges are likely to persist in Brazil for the next decade. In the short and medium term, the country will continue to be heavily dependent on truck transport to move soybeans to ports for export. Brazil will need to continue investing to reduce high conventional transportation costs and improve logistics – a historical Brazilian disadvantage in relation to the U.S agriculture.

The growth of Brazilian soybean rates in the next decade are expected to continue higher than the nation’s main competitors, such as the United States and Argentina. The expansion of the area planted will occur due the occupation of underutilized pasturelands and the opening of new agricultural frontiers. Farmers will expand mostly in the North and Northeast, especially in the Matopiba, region formed by the Brazilian state of Tocantins and some parts of the states of Maranhão, Piauí and Bahia. The positive profit margins, availability of land and advances in logistics will be the main drivers of this expansion in the next ten years.