Illinois Crop Budgets for 2022 corn and soybeans were released in July (see farmdoc Daily, July 27, 2021). Positive returns are projected for both crops given a $4.25 corn price and $12.00 soybean price, both of which are significantly above prices received from 2014 to 2019. We provide stress tests of corn and soybean returns under lower prices which could result for a variety of reasons including acreage responses. A return to 2014-2019 prices would result in meager incomes, and possible pressures for another round of ad hoc Federal payments. In two scenarios of lower prices, corn returns are much lower than soybean returns, suggesting there is more risk to growing corn than soybeans in 2022. Commodity title payments from Agriculture Risk Protection (ARC) and Price Loss Coverage (PLC) programs do not protect against the possibility of negative farm returns.

We modified the crop budgets released in July to account for new information about yields, prices, and cash rents. Table 1 shows revised budgets with three modifications from the same table in the July 27, 2021 farmdoc daily: 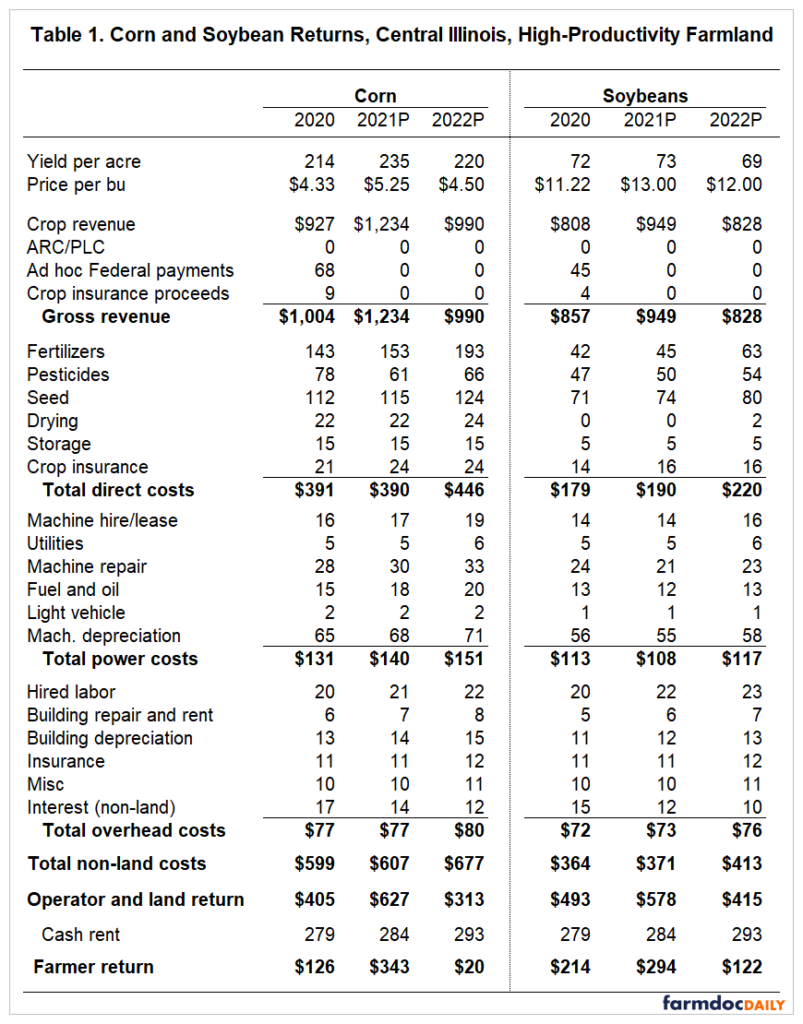 Perspective on these returns can be seen in Figure 1, which shows farmer returns for high-productivity farmland in Central Illinois given a 50% corn and 50% soybean rotation (hereafter called a 50-50 rotation).  Rotation will have large impacts on yield, with a 50-50 rotation being the most common in this area.  Given current projections, putting more soybeans in the rotation will increase returns. 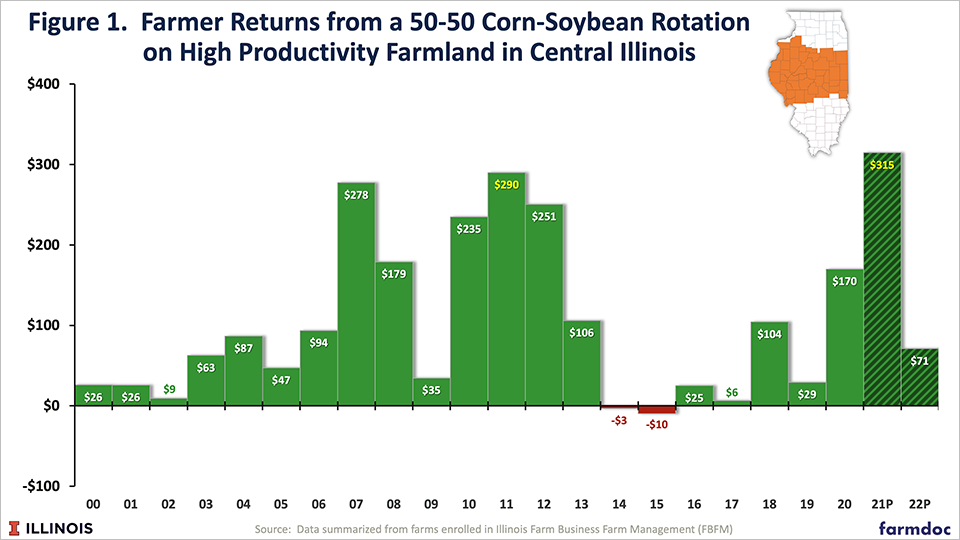 Projected farmer return for the 50-50 rotation is $315 per acre for 2021, a record level exceeding the previous high of $290 per acre set in 2011. Incomes in 2021 likely will be considerably higher than average if harvested yields are near record levels and commodity prices remain high.

Returns are projected at $71 per acre in 2022 at budgeted prices of $4.50 per bushel for corn and $12.00 per bushels for soybeans. Returns were estimated at lower prices to identify potential stress points for the coming year. Only prices were lowered as acreage responses could lead to lower prices. Yields and costs were maintained at the same levels as shown in Table 1. In the lower price scenarios, ARC/PLC payments were included when prices indicated the likelihood of payment. The three scenarios are:

While returns are projected positive for 2022, relatively small declines in prices could cause returns to be negative. The 2022 break-even prices below which returns would be negative on cash rented land are:

Returns were estimated at 2014-2019 average prices of $3.64 per bushel and $9.91 per bushel. Base acres in corn most likely would generate a commodity title payment at those prices if those acres were placed in PLC. ARC/PLC payments were set at an average of $5 per acre for both corn and soybeans. These payments were averaged across crops because payments are made on base acres and not planted acres.

This scenario represents low prices that are unlikely but could happen. The lowest prices from 2014 to 2017 was used in for this scenario:

The years 2018 and 2019 are not included because trade difficulties influenced those prices. We judged the likelihood of trade difficulties in 2022 as being low. Had those years been included, the soybean price used for stress test three would have been lowered to $9.12. A $3.49 corn price would generate a PLC payment for corn, but a $9.39 soybean price would not generate a PLC payment. ARC/PLC payments set at an average of $20 per acre were applied to both corn and soybeans.

At those price levels, corn’s projected return is -$182 per acre, while soybean returns are projected at -$38 per acre. The average return for the 50-50 rotation is -$110 per acre. Under this scenario, most farmers’ financial situation would deteriorate significantly.

Incomes on Illinois grain farms likely will be above average in 2021 and could be above 2014-2019 levels in 2022. Both 2021 and 2022 prices and costs are well above averages during the late-2010s, leading to concerns of lower returns if prices decline. A return to 2014-2019 could lead to very low returns because of higher non-land costs.

Even though reference prices are at the same level, current commodity title programs provide less protection against low incomes in 2022 than in the 2014-2019 period. Higher non-land costs contribute to less protection along with declining benchmark prices for ARC.

Lower prices could lead to pressures for another round of ad hoc Federal payments. Whether those payments would occur under lower prices is an open question.