Compared to 2021, fertilizer costs in 2022 will be about $100 per acre higher for corn and $50 higher for soybeans. Even given the large increase in corn fertilizer costs, corn is projected to be more profitable than soybeans at current 2022 fall delivery bids. Given historical experience, large acreage shifts should not be expected between corn and soybean. Of course, market conditions could change that scenario before planting. 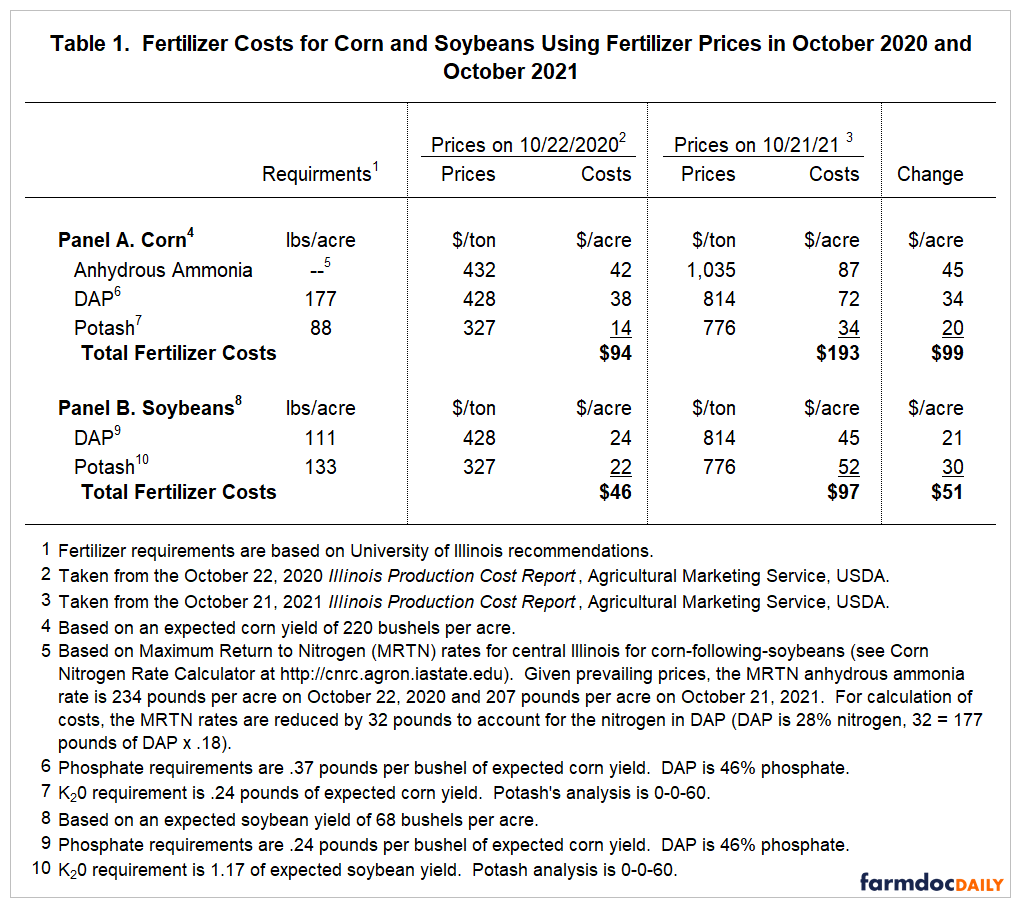 Costs are calculated using applications at university-recommended levels. Yields used to calculate needed rates represent high-productivity farmland in central Illinois: 220 bushels per acre for corn and 68 bushels per acre for soybeans. The Corn Nitrogen Rate Calculator was used to arrive at Maximum Return to Nitrogen (MRTN) rates for corn. After accounting for nitrogen in DAP, the MRTN rates resulted in applications of 186 pounds of anhydrous ammonia for last year and 169 pounds per acre for this year (see farmdoc daily, October 26, 2021). Phosphate and potash rates are based on maintenance levels (see Nafziger, farmdoc, September 7, 2017).

Costs estimated using procedures in Table 1 will yield lower fertilizer costs than what farmers report to Illinois Farm Business Farm Management (FBFM). For corn, the reasons for actual costs being higher than estimates are:

Table 2 shows corn and soybean budgets for northern, central, and southern Illinois. Central Illinois is divided into high-productivity and low-productivity farmland. Budgets for 2022 were originally released in July (see farmdoc daily, July 27, 2021). All items in Table 1 remain the same except for:

Budgets in Table 2 contain revenue and all non-land costs. Operator and land return for each crop gives a return to both the farmer and landowner. As can be seen in Table 1, corn is projected to be more profitable than soybeans. Corn-minus-soybean return is $38 per acre in northern Illinois, $27 per acre in Central Illinois for high-productivity farmland, $32 for low-productivity farmland in Central Illinois, and $37 for Southern Illinois. In all regions, corn has an expected economic advantage over soybeans. 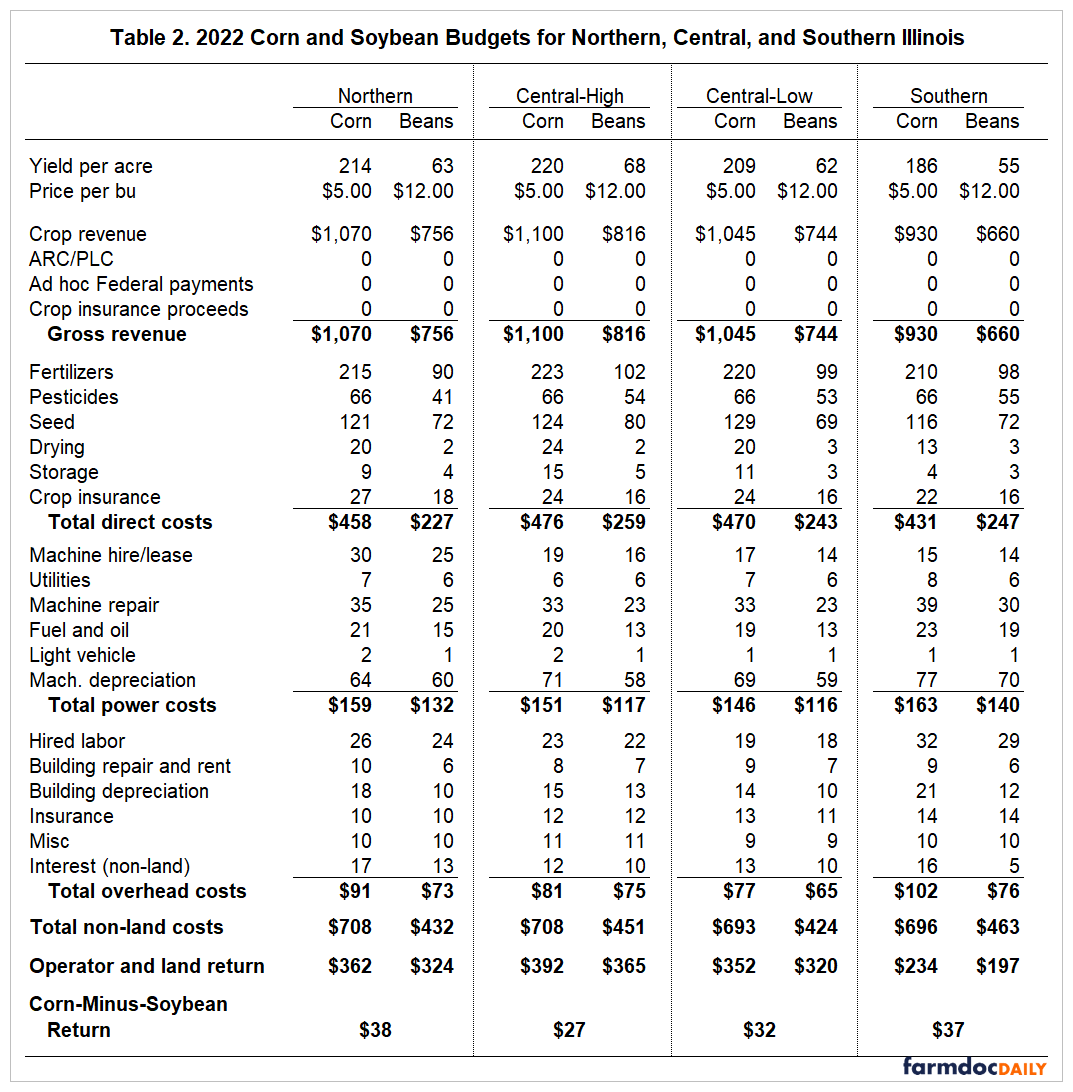 Corn being more profitable than soybeans is put in a historical context in Figure 1 for high-productivity farmland in central Illinois. As can be seen, corn had an advantage over soybeans in most years before 2013, with particularly large advantages in 2006 through 2008, 2011, and 2012. The 2006 to 2008 period was the beginning of the ethanol build, where an increasing amount of corn was used to produce ethanol. This build came to an end in 2013. During this period, corn acres exceeded soybean acres by a fairly wide margin in central Illinois (see Figure 1). 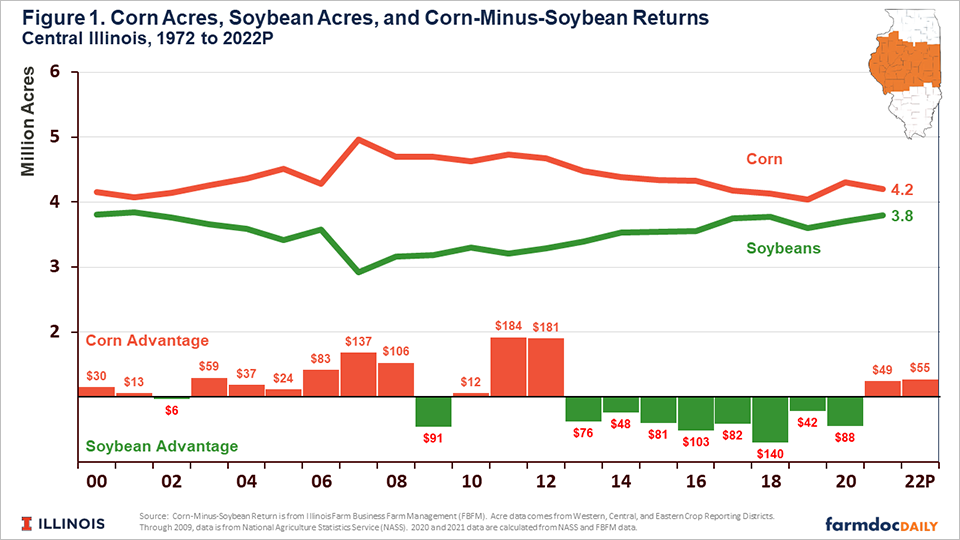 From 2013 to 2020, soybean returns exceeded corn returns, and the difference between corn and soybean acres narrowed. Corn is projected to be more profitable in 2021 and 2022. Given historical changes, the 2022 projections would not suggest large shifts in corn and soybeans.

Similar trends exist in southern Illinois, with acreage being more in soybeans than in central Illinois (see Figure 2). Between 2006 and 2012, corn returns exceeded soybean returns, and corn and soybean acres were roughly equal. Between 2013 and 2018, soybeans were more profitable in southern Illinois, and soybean acres increased while corn acres declined. In recent years, corn returns have exceeded soybean returns. These trends suggest that the continued movement of acres to soybeans should not be expected in 2022. 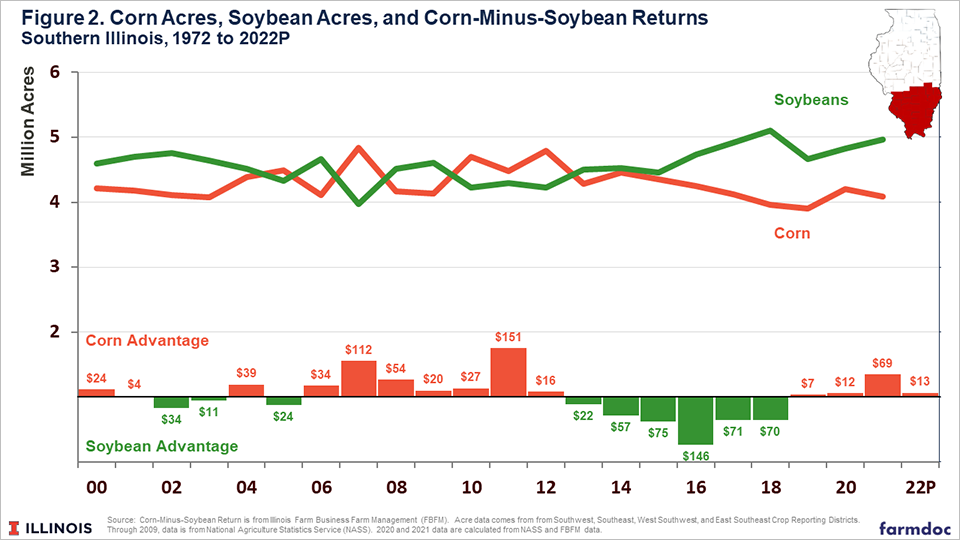 Similar trends exist in northern Illinois (see Figure 3), with more of the acreage in corn when compared to central Illinois. In most years before 2013, corn was more profitable than soybeans, and corn acres exceeded soybean acres by fairly wide margins. However, soybean returns exceeded corn returns from 2013 to 2019, and the difference between corn and soybean acres narrowed throughout this period. Current projections do not suggest significant shifts in 2022 acres in northern Illinois. 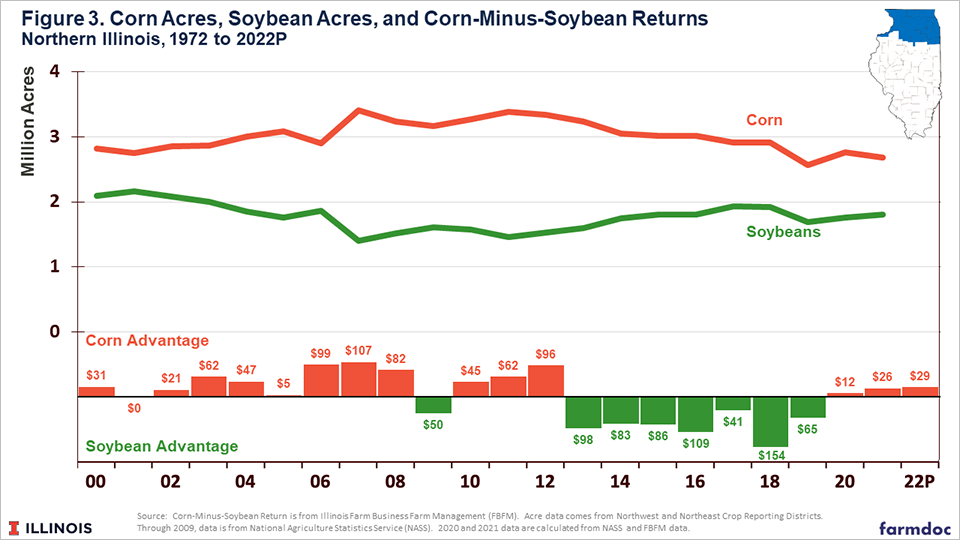 Even though fertilizer prices are very high, current budgets suggest that corn will be more profitable than soybeans across Illinois. Changes in corn, soybean, and fertilizer prices could change that situation before spring planting. Moreover, each farm should prepare its own budget, as much will depend on an individual farm’s cost, timing of fertilizer purchase, and the form of nitrogen. Still, budgets suggest large swings in acres are not likely at current price levels.