Replacing an aging US farmer population continues to attract considerable attention from the general public and policy makers.  This article uses data, in part from the 2017 Census of Agriculture, to provide perspective.  As a group, the data do not make a convincing case for concern over replacing current US farm producers, although it does suggest questions for public policy discussion. 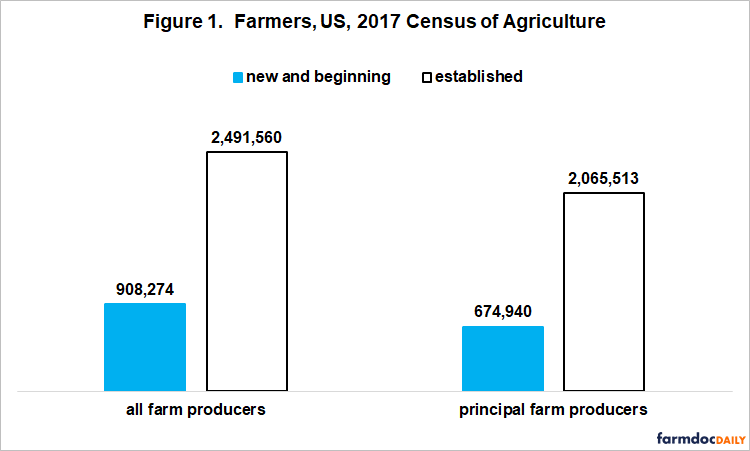 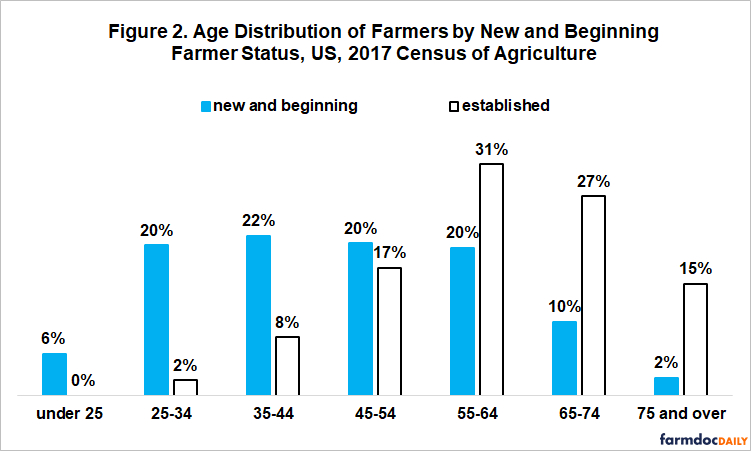 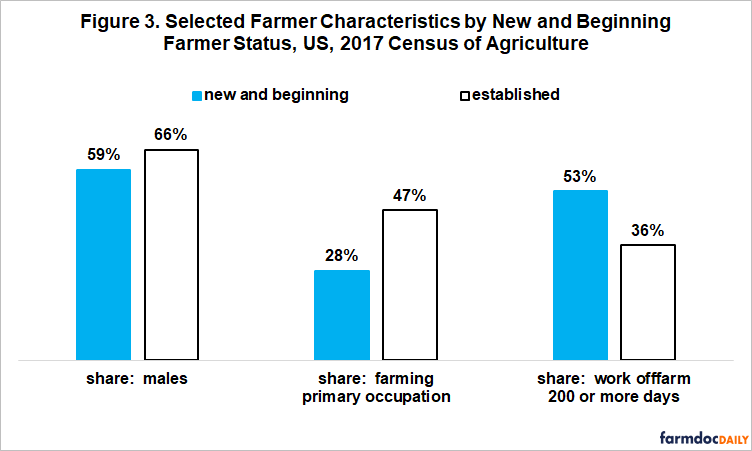 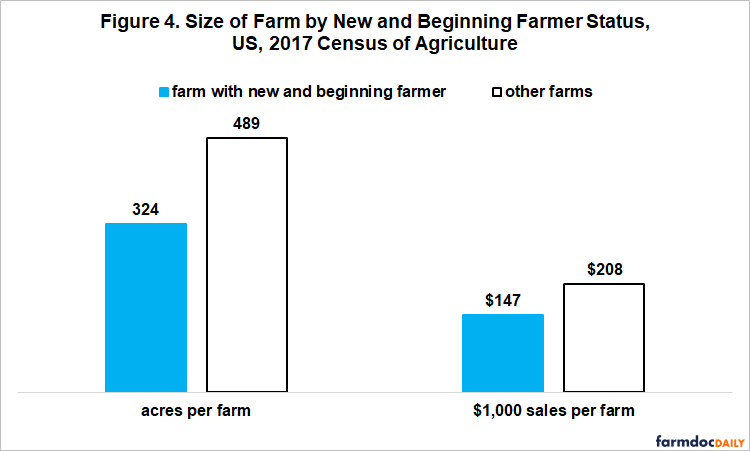 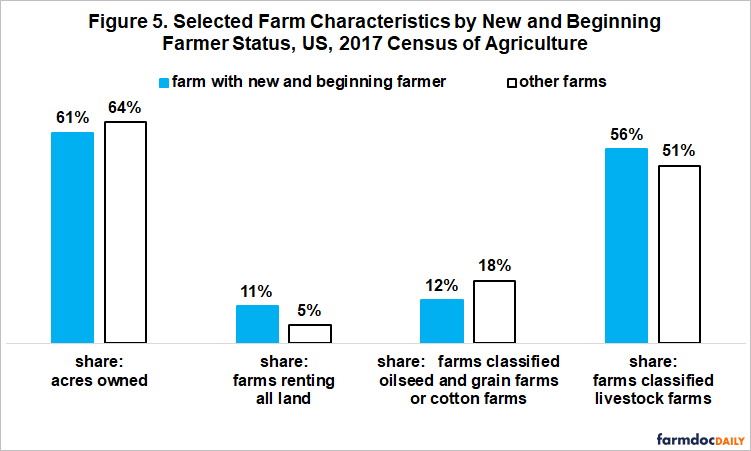 The issue of new and beginning farmers is intertwined with the issue of intergenerational transfers of farms.  A 2001 survey of farmers in 26 states (see Data Note) contained the following question:  “On this farm or ranch, which generation does the current operator represent (including your family or your spouse’s family)?”  Respondents were asked to check a box for 1, 2, 3, 4, 5, or 6 or more generations.  Respondents classified 36% of their farms as 1st generation, a share only slightly less than the 39% classified as 3rd and higher generation farms (see Figure 6).  Only 4% were classified as 5th or higher generation farms.  Compared with 3rd generation farms, 1st generation farms were smaller, provided a smaller share of family income, and were less dependent on farm program crops.  These differences were significant at the 99% level of statistical confidence.  They mirror the differences between established and new and beginning farmers in the 2017 Census of Agriculture.  For additional discussion of the findings for the farm generation question, see Zulauf et al. (2004 and 2013). 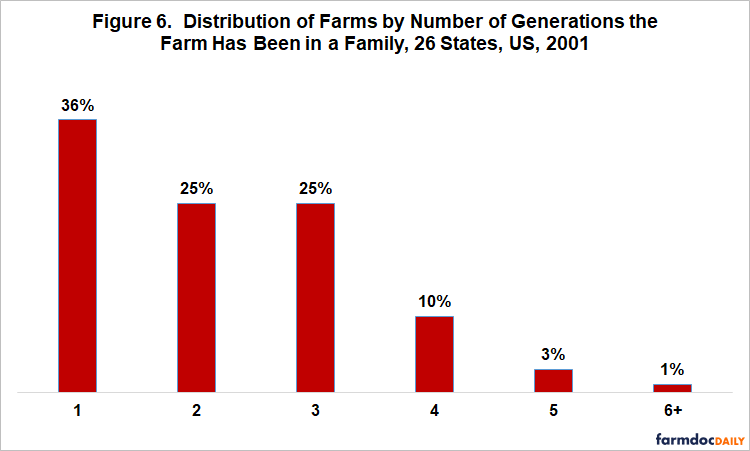 New and beginning farmers occupy an important role in the US farm sector.  They account for a quarter of all US farmers according to data collected in the 2017 Census of Agriculture.

The 2017 Census does not provide information on a key distinction, what share of new and beginning farmers are new to agriculture and what share are sons and daughters of current farmers.

Importance of this distinction is underscored by the finding in a 2001 survey that 1st generation farms occupy an important role in the US farm sector.  They were estimated to account for one-third of farmers in the 26 states surveyed.

The share of farmers that are new and beginning farmers as well as the share that are 1st generation farmers suggests that entry into farming is not the barrier it is portrayed.

New and beginning famers and 1st generation farmers both depended more on nonfarm income than other farmers.  This finding is consistent with nonfarm income being an important entry path to farming, implying entry paths to farming are broader than inheritance.  Broader entry paths mitigate concerns about replacing US farmers.

Farm program crops account for a larger share of sales on established farms and on 3rd and higher generation farms.  This finding raises an intriguing question: “Have farm programs raised the importance of inheritance and by extension, avoidance of inheritance taxes, in the US farm sector?”

The information in this article suggests that, if a farm entry issue exists, it is for young individuals who are not related to a farmer and have little nonfarm family income.  Providing assistance to relatives of farmers is likely more about maintaining farms within a family than providing an entry opportunity.  For individuals entering farming with capital accumulated from non-farm earnings and investments, their needs are likely to be assistance with skills specific to farm finance, management, and production of their chosen farm commodities, regardless of their age at entry.  Effective policy requires recognizing the different needs of the different categories of new farmers and designing programs scripted for each new farmer category.

The 26 states were surveyed to provide insights into farmer opinions regarding potential issues during the debate over the 2002 farm bill.  A total of 13,222 useable surveys were obtained.  Responses were weighted based on survey methodology to generate a population estimate for each state.  The state population estimates were summed to obtain estimates for the 26 states as a group.  The 26 states contained 64% of all US farms in the 2002 Census of Agriculture.  The farm generation question was subjective.  Depending on their interpretation of their situation, respondents in the same objective situation could have answered the question differently.  Nevertheless, it allowed survey respondents to provide an indication of the extent to which their farm remained in their family across generations.  For a detailed discussion of the survey and its methodology, see Lubben et al. (2001).

Zulauf, C., F. Yavuz and B. Lubben. "Number of Generations a Farm Has been in a Family." farmdoc daily (3):232, Department of Agricultural and Consumer Economics, University of Illinois at Urbana-Champaign, December 6, 2013.