The farmdoc daily article of December 20, 2021 posits that the US Federal debt is not likely to have a major impact on Federal policy and spending unless Federal outlays for interest substantially increase as a share of all Federal outlays.  This article therefore examines US nominal and real (inflation-adjusted) interest rates.  Americans younger than 40 have little experience with sustained increases in interest rates.  Moreover, the current real interest rate is more negative than any time over the observation period that starts in 1962.  A third article in this series will examine the US labor market. 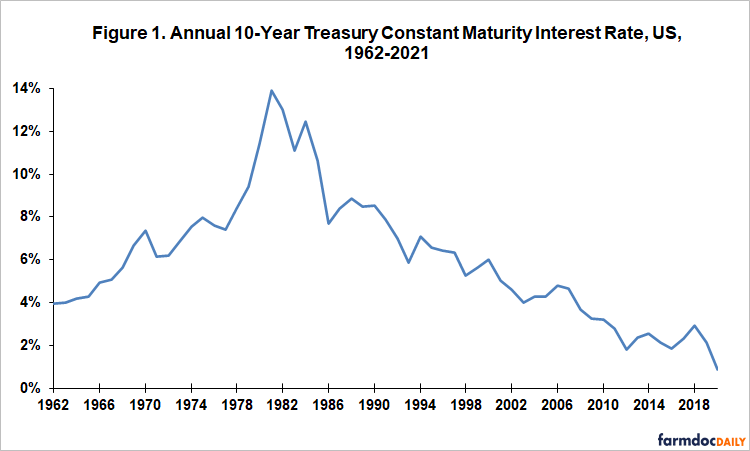 Nominal interest rates do not consider inflation.  The Gross Domestic Product (GDP) implicit price deflator index is considered the most complete measure of prices in an economy.  As measured by the year-over-year change in this index, US inflation has never reached double digits but did reach at least 9% in 1974, 1975, 1980, and 1981.  The initial peak in what was a double peak inflation period was associated with higher oil prices caused in part by an oil export embargo largely led by Middle East countries.  Similar to the nominal 10-year Treasury rate, inflation has consistently declined since the early 1980s.  Correlation between these two variables is +0.67, indicating a reasonably close relationship in which nominal interest rates are higher when inflation is higher.  Using the average GDP price index for the first three quarters of 2021, current inflation is 3.3%, the highest since 3.4% in 1991.  The GDP price index is also from the Federal Reserve Bank of St. Louis. 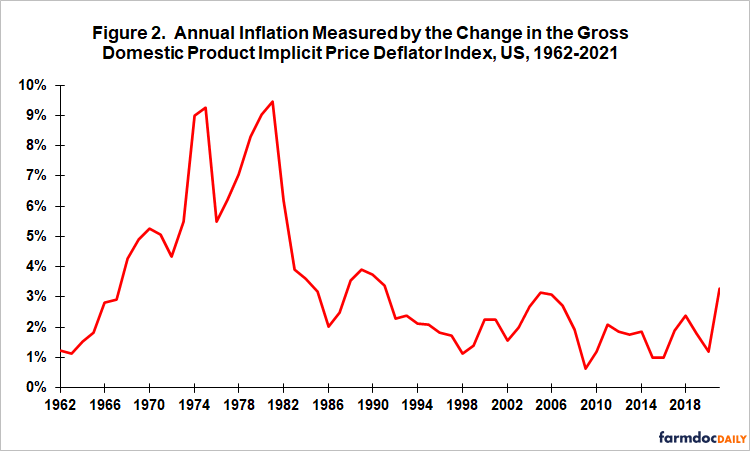 The real interest rate was calculated as the 10-year Treasury constant maturity interest rate for a year minus the percent change in the GDP implicit price deflator index from the previous year.  Like the nominal 10-year Treasury rate, the real 10-year Treasury rate has declined consistently since the early 1980s.  The peak real rate was 8.8% in 1984.  The real 10-year interest rate has been negative in 5 years:  1974, 1975, 2012, 2020, and 2021.  The average real rate for 2021 is currently -1.85%, the lowest over the observation period.  This situation is unlikely to change after final data becomes available for 2021 since recent monthly inflation numbers have remained high. 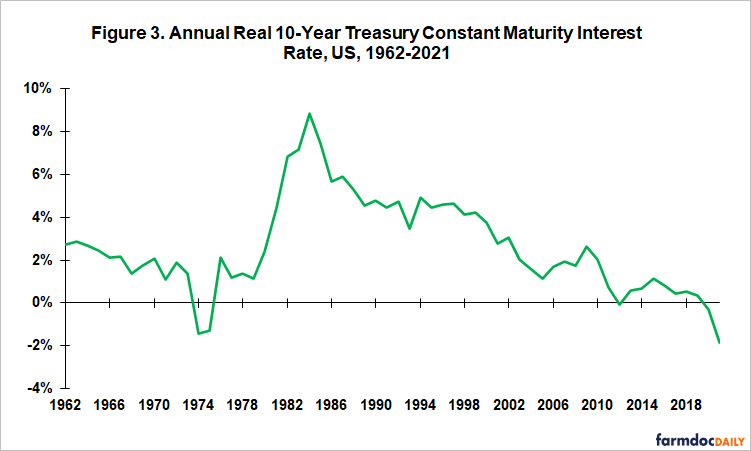 The real 10-year US Treasury Bond interest rate has been negative for the last two years.  The only other two year period of negative real interest rates occurred during the 1970s.

The combination of inflation and negative real interest rates (1) encourages current consumption since goods and services will be more expensive in the future and (2) discourages investment in interest rate instruments such as bank CDs since earned interest will not cover inflation price increases.

A key, emerging question is, “Is the US entering a period of sustained inflation?”

Reinforcing this question’s importance is that Americans younger than 40 have little experience with sustained increases in inflation and interest rates.  It is not clear how they will react if one or both occur.

History may or may not be a good predictor of the future, but in the US’s most recent bout with inflation, inflation trended upward throughout the 1960s and 1970s.  It was not until the late 1970s that the US decided to cure its inflation. Thus, even if inflation is emerging as a problem, it may be several, perhaps many, years before the US get serious about addressing it.  Factors likely to influence the timing of a response will be how high is sustained inflation and how rapidly is it increasing.

The approach the US took to curing its inflation in the late 1970s was an extended period of high real interest rates.  This approach in turn led to an extended period where Federal outlays for interest on the debt materially constrained Federal policy and spending.  It also contributed to real estate investments, such as farmland, and stocks struggling with low returns and declining values.

The next article in this series will examine the US labor market to assess its potential to impact inflation and by extension interest rates.