Despite the effects of the COVID pandemic and associated severe economic contraction, biodiesel plants basically broke even in 2020 (farmdoc daily, February 3, 2021).  However, storm clouds were gathering as returns went into the red starting in late summer of 2020.  Losses by the end of the year were among the worst since 2007.  In fact, the losses were severe enough to drive the representative biodiesel plant into shutdown territory for an extended period of time.  The driving force behind the historic losses late in 2020 was skyrocketing soybean oil prices that outpaced gains in biodiesel prices.  The purpose of this article is to estimate biodiesel production profits for 2021 and determine whether the red ink continued.

As in earlier farmdoc daily articles (e.g., March 27, 2019, February 5, 2020, February 3, 2021), a model of a representative Iowa plant is used to assess biodiesel production profitability.  The model is a modified version of the representative plant model developed by Don Hofstrand at Iowa State University.  It is important to note that this is a model of a FAME (fatty acid methyl ester) biodiesel plant, where the FAME acronym refers to the transesterification chemical process used to convert fats and oils feedstock into renewable biodiesel.  In particular, this method of biodiesel production should not be confused with renewable diesel production, which is growing rapidly.  A good description of the differences can be found here at the Alternative Fuels Data Center from the U.S. Department of Energy.

This model is meant to be representative of an “average” plant constructed in 2007 to process soybean oil into biodiesel.  There is certainly substantial variation in capacity, production efficiency, and feedstock across the industry and this should be kept in mind when viewing profit estimates from the model.  However, limiting the feedstock to soybean oil is reasonable since it represents about half of the feedstock used to produce biodiesel in the U.S. and feedstock prices tend to be highly correlated.

In previous versions of the representative biodiesel plant model, a conversion factor of 7.55 pounds of soybean oil per gallon of biodiesel was assumed.  Data on biodiesel production and feedstock use from the EIA’s Monthly Biodiesel Production Report were examined to determine whether biodiesel production efficiency has improved in recent years.  Across all types of production feedstock (e.g., soybean oil, canola oil, animal fats) the average conversion rate was 7.50 over January 2017 through November 2020, slightly below the 7.55 conversion factor assumed in the original version of the model.  The conversion efficiency did improve over this period, averaging 7.57 in 2017 compared to 7.51 in 2020.  Based on this analysis of EIA data, the feedstock conversion rate in the model was dropped from 7.55 to 7.50 pounds starting in 2018.

To track plant profitability over time, weekly biodiesel and soybean oil prices at Iowa plants from the Agricultural Marketing Service (AMS) were collected starting in 2007.  Natural gas costs over 2007 through March 2014 are based on monthly industrial prices for Iowa available from the EIA.  Due to a change in the behavior of the industrial price series, starting in April 2014 natural gas costs are based on monthly electric power consumer prices for Iowa, also from the EIA.  Glycerin and methanol prices are obtained from OPIS.

Figure 1 presents the price of biodiesel—the main revenue component—on a weekly basis from January 26, 2007 through January 21, 2022.  The figure reveals that biodiesel prices skyrocketed in the first half of 2021, reaching an all-time high (since 2007) of $6.11 per gallon in mid-June.  Prices then slid back towards $5 per gallon the remainder of the year, which was still a very high price by historical standards. Glycerin is the other biodiesel revenue component and Figure 2 shows that its price truly went linear in 2021.  Glycerin prices reached the historically unprecedented level of $0.65 per pound in November.  Traditionally, by-product revenue from glycerin was only a few cents, but prices in 2021 reached such a high level that it became a meaningful component of revenue for part of the year. 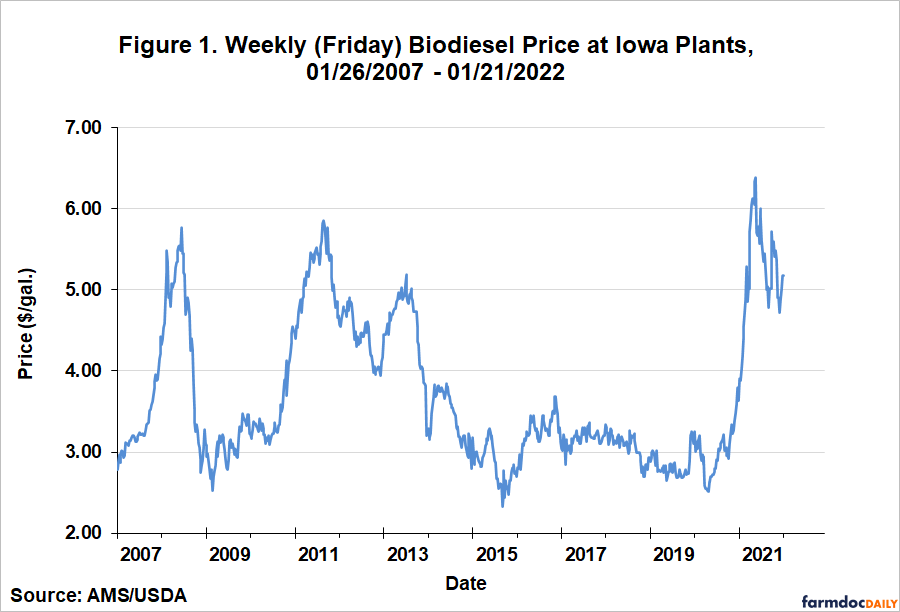 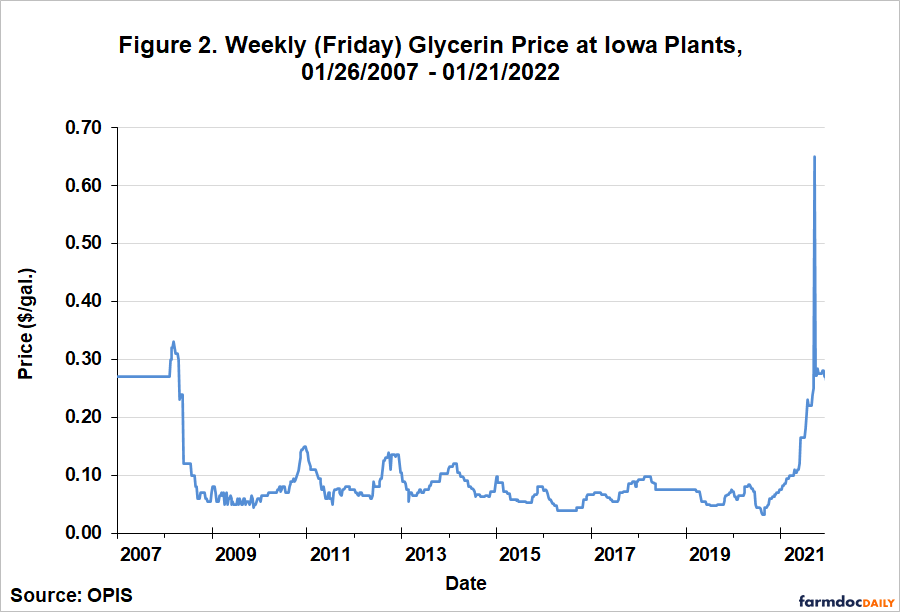 Figure 3 presents the price of soybean oil—the main cost component—on a weekly basis for the same time period.  This figure shows that soybean oil prices skyrocketed right along with biodiesel prices during the first half of 2021, reaching the stunningly high level of $0.89 per pound in early June.  Soybean oil prices then dropped under $0.70 by the end of the year. 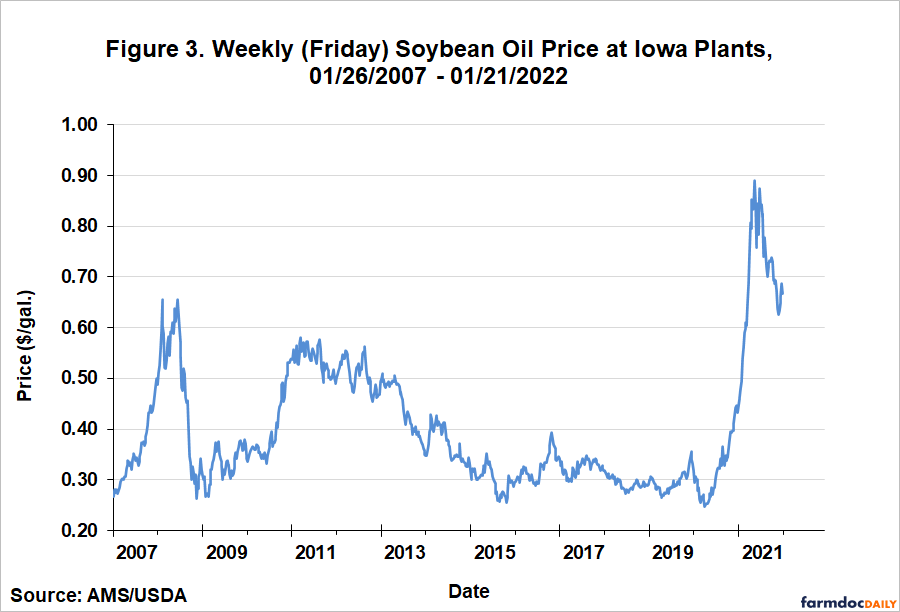 The picture that emerges is rapidly rising revenue and costs for biodiesel producers in 2021.  Since it is not possible to determine whether biodiesel or soybean oil price movements dominated in 2021 simply by looking at Figures 1 and 2, total revenue and cost for the representative biodiesel plant are shown in Figure 4.  Note that revenue is dominated by the price of biodiesel (minus netback charges), while cost is the sum of all variable and fixed costs.  Of course, the cost of soybean oil dominates the cost side of the ledger.  The figure indicates that revenue and cost were not terribly different during the first half of 2021, but for the remainder of the year cost was substantially above revenue.  Interestingly, during this period of large losses, biodiesel revenue reached an all-time high (since 2007) of $6.42 per gallon. 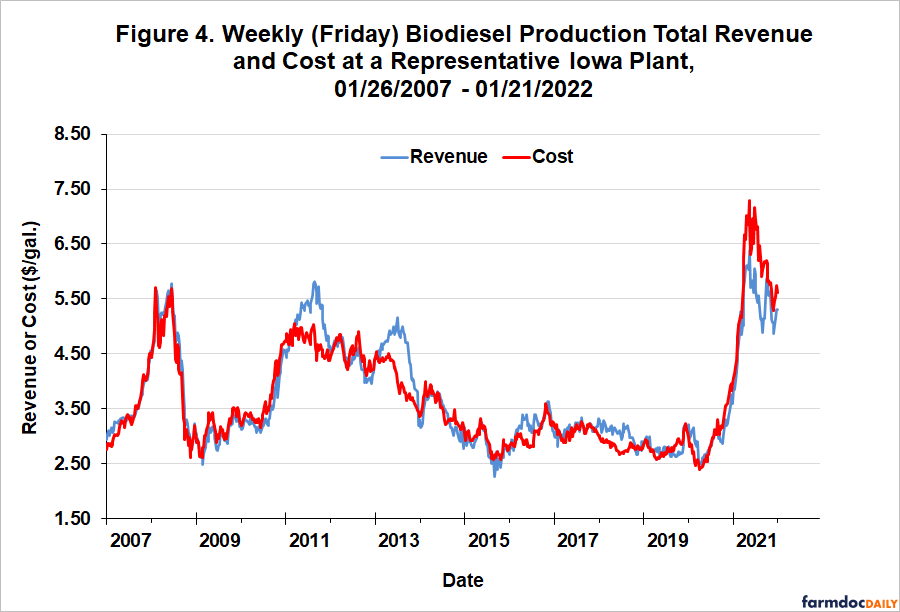 Weekly biodiesel production profits (pre-tax) net of all variable and fixed costs are shown in Figure 5.  This is simply the difference between revenue and cost presented in Figure 4.  The representative plant is estimated to have operated in the red for virtually the entirety of 2021.  However, losses for the first quarter were at least within the range of historical experience.  The bottom literally fell out starting in April as soybean oil prices raced far ahead of biodiesel prices.  In August, losses reached the unheard level of -$1.39 per gallon, which was obviously a new record low for this data set.  Losses did lessen substantially during the fall but tailed off once again towards the end of the year.  The average net loss estimated for the entire calendar year in 2021 was -$0.61 per gallon, which dwarfs the historical average profit of $0.03. 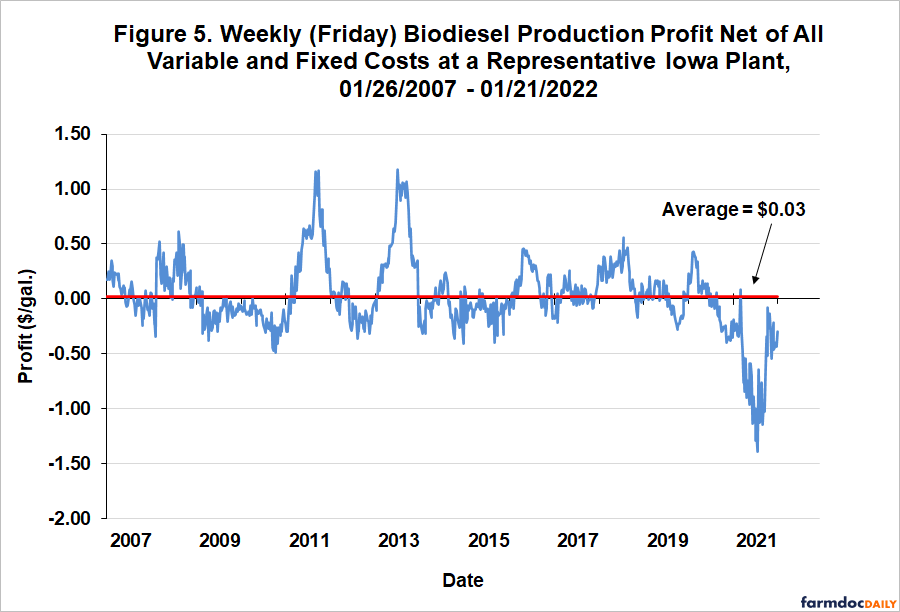 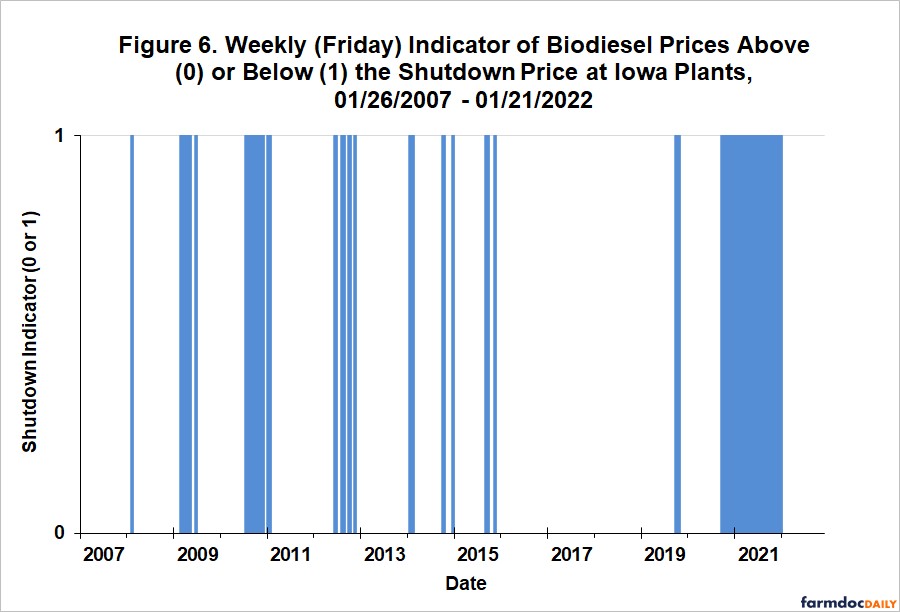 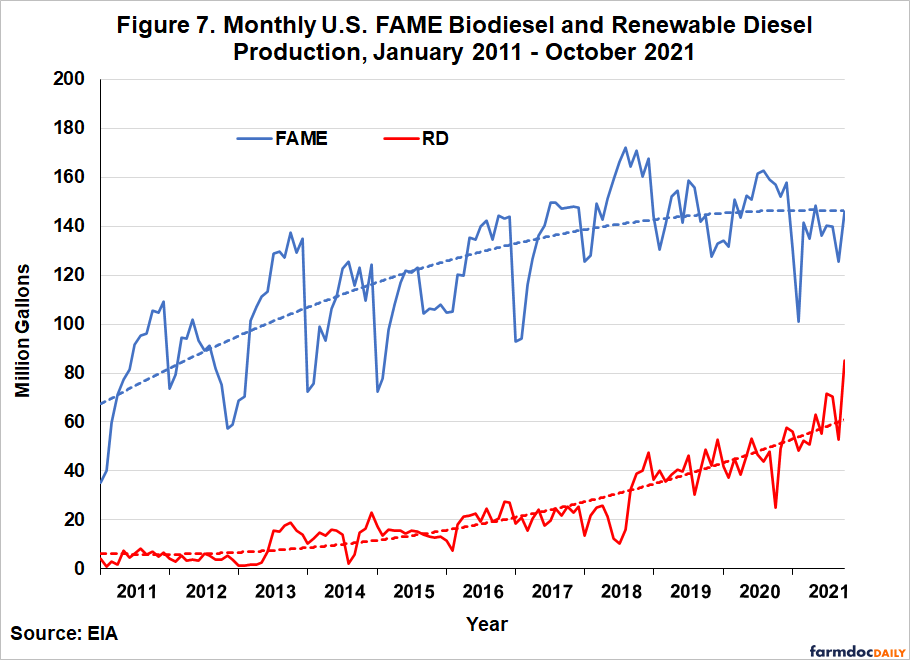 Further perspective on the devasting losses of biodiesel producers in 2021 is provided by aggregating profit margins to an annual horizon.  Figure 8 shows total annual (pre-tax) profits net of variable and fixed costs for each calendar year between 2007 and 2021.  Profits are presented in terms of both total net returns and percent return to equity.  The total loss of the representative biodiesel plant in 2021 was a staggering -$18.3 million, or a return to equity of -77.5 percent.  Not only was this the third consecutive year of negative annual profits, but the 2021 loss equaled 40 percent of all of the profits earned by the representative plant in previous years.  With the addition of 2021 losses, the total cumulative (pre-tax) return to equity holders for the 2007-2021 period stands at only $12.2 million, $11.4 million less than the assumed original equity investment for the plant of $23.6 million.  We can also use the average net loss for the representative plant to make a rough estimate of the loss for the entire U.S. biodiesel industry in 2021.  Assuming all plants in the industry earned a net profit of -$0.61 per gallon and total biodiesel production for the U.S. in 2021 was 1.618 billion gallons, this implies aggregate industry losses of -$987 million. 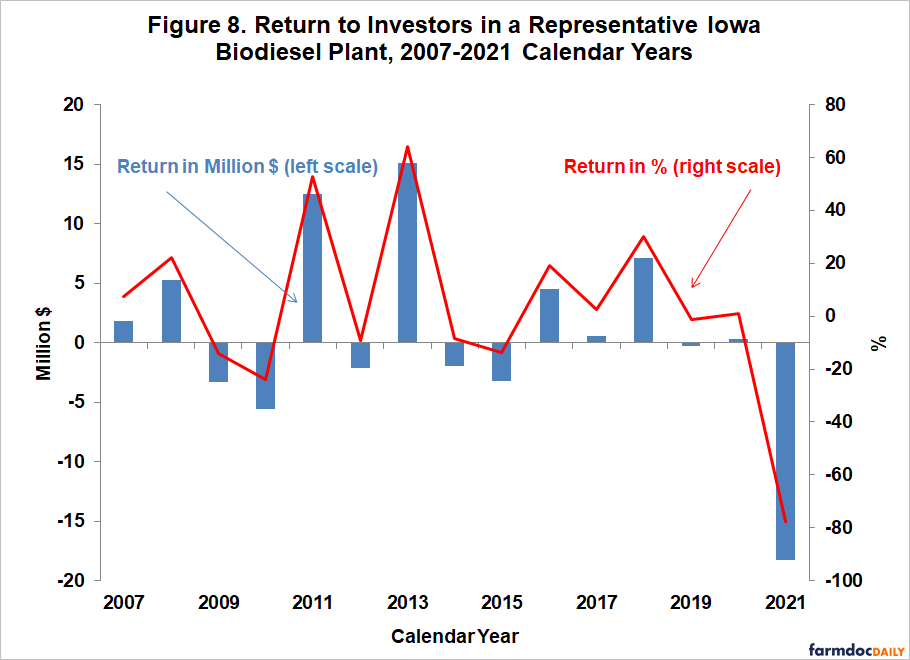 The average percent return to equity holders provides useful information on the performance of biodiesel plants relative to other investments.  The average return was 3.5 percent over 2007-2021 and the standard deviation, a measure of risk, was 33.5 percent.  By comparison, the average return for the stock market over this period, as measured by the S&P 500, was 12.1 percent and the associated standard deviation was 17.5 percent.  The ratio of average return to standard deviation provides one measuring stick of an investment’s return-risk attractiveness, and on this measure the ratio for biodiesel investment, 0.10, is substantially lower than the stock market as a whole, 0.69.  There is no doubt that the devastating losses in 2021 severely damaged the attractiveness of biodiesel plants as an investment.

Finally, it is important to note that the annual profit estimates do not take into account revenue from retroactively reinstated biodiesel tax credits.  In response to the retroactive reinstatement of the $1 per gallon blenders tax credit in several years during the sample, sharing clauses in marketing contracts may have been invoked between biodiesel producers and blenders.  These clauses specify how the biodiesel tax credit will be shared between the biodiesel producer and blender if the tax credit is not in place at the time a transaction is made but retroactively reinstated at some later date.  There is no public data on the exact nature of the sharing provisions or the frequency that such provisions are put in place.  Anecdotal evidence suggests sharing provisions are widespread and that the typical split of the $1 per gallon credit is 50/50.  We have previously shown (e.g., farmdoc daily, February 5, 2020) that this additional tax credit revenue, garnered through sharing agreements with blenders, can yield a more positive long-term picture of the profitability of U.S. biodiesel production.

We estimate that the average net loss in 2021 for a representative Iowa biodiesel plant was -$0.61 per gallon, which dwarfs the historical average profit of $0.03. This translates into a staggering loss of -$18.3 million for the year, or a return to equity of -77.5 percent.  This loss wipes out 40 percent of all profits earned over 2007-2020.  The driving force behind the devastating losses was skyrocketing soybean oil prices that outpaced gains in biodiesel prices.  All signs point to a policy-driven boom in renewable diesel production as the underlying culprit behind the surging soybean oil prices, and hence, the losses for biodiesel producers.  It is clear that the recent level of losses is unsustainable.  In fact, it is not clear why biodiesel production held up as well as it has during 2021.  One possibility is that biodiesel producers had a source of revenue we did not account for in the analysis, such as COVID relief funds.  The other possibility is that the industry grimly hung on through 2021 in the face of the onslaught from renewable diesel production and it is only a matter of time before more biodiesel plants are forced to shut down.