The Ukraine-Russia war has resulted in much higher wheat prices as both Ukraine and Russia are significant exporters of wheat. As a result, some Illinois farmers may be considering planting wheat for harvest in 2023. In southern Illinois, budgets using 2023 harvest-time bids indicate that wheat-double-crop-soybeans are expected to be more profitable than stand-alone corn and soybean. Similarly, wheat-double-crop-soybeans are projected to be more profitable on high-productivity farmland in central Illinois. As a result, considering planting wheat for the 2023 harvest has merit. Still, wheat-double-crop-soybeans have challenges, and much can change between now and when decisions finally need to be made. 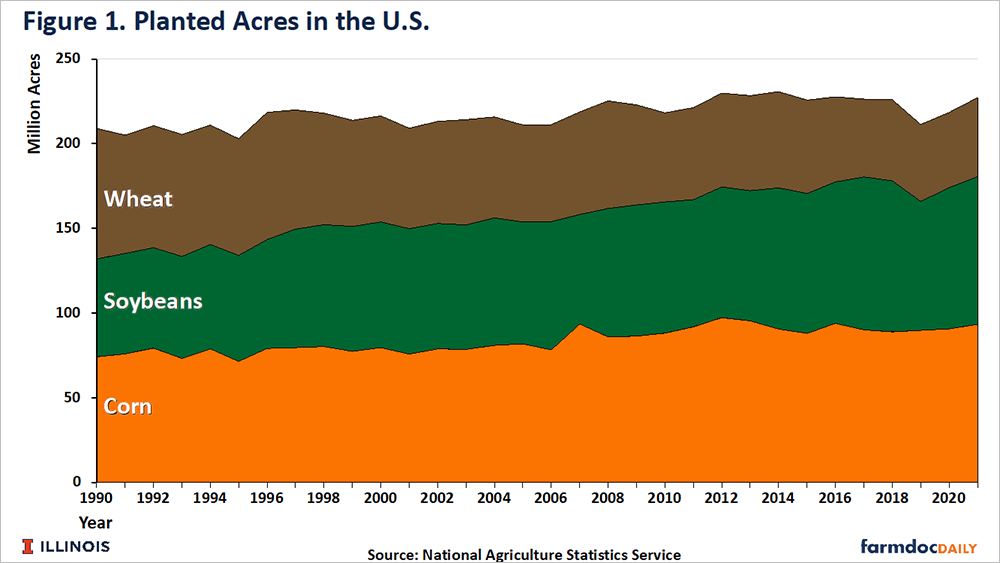 Changes in demand partially explain these acreage shifts. The ethanol build from the mid-2000s to the mid-2010s spurred corn demand. Soybean exports have continued to grow throughout much of this period. On the other hand, the primary uses of wheat are in bread and other bakery products, which has generally been stable. Furthermore, corn and wheat are energy sources in livestock diets, and corn has increasingly filled this need.

The timing of wheat planting varies by geography and wheat classes. Some wheat classes are planted in the spring, including hard red spring wheat and durum wheat. Hard red spring wheat is used to make bread, while durum wheat often is used to make pasta. These kinds of wheat are grown in the northern Great Plains (see Figure 2). The Ukraine-Russia conflict happened before spring wheat planting commenced, leaving the possibility of increased spring wheat acres in 2022. Whether farmers choose to increase 2022 spring wheat plantings is an open question. Most planting decisions likely were made before the conflict began and adjusting planting decisions could be difficult. Furthermore, the profitability of corn and soybeans — the most likely alternatives to wheat — are projected to be profitable in 2022. 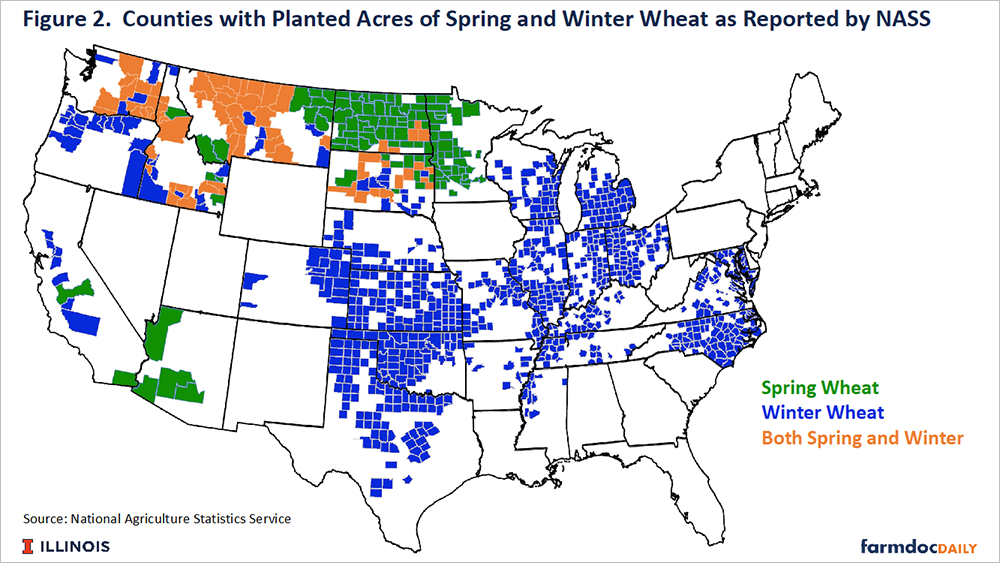 Winter wheat is planted in the fall and harvested the following summer. Given the planting schedule, harvested acres in 2022 cannot increase as these winter wheat plantings have already occurred. Winter wheats are planted over a large portion of the U.S. (see Figure 2). Two types of winter wheats predominate. Hard red winter used in making bread is grown in the Great Plains. Soft red winter wheat — usually used to make cakes, cookies, and crackers — is grown east of the Mississippi, including Illinois. 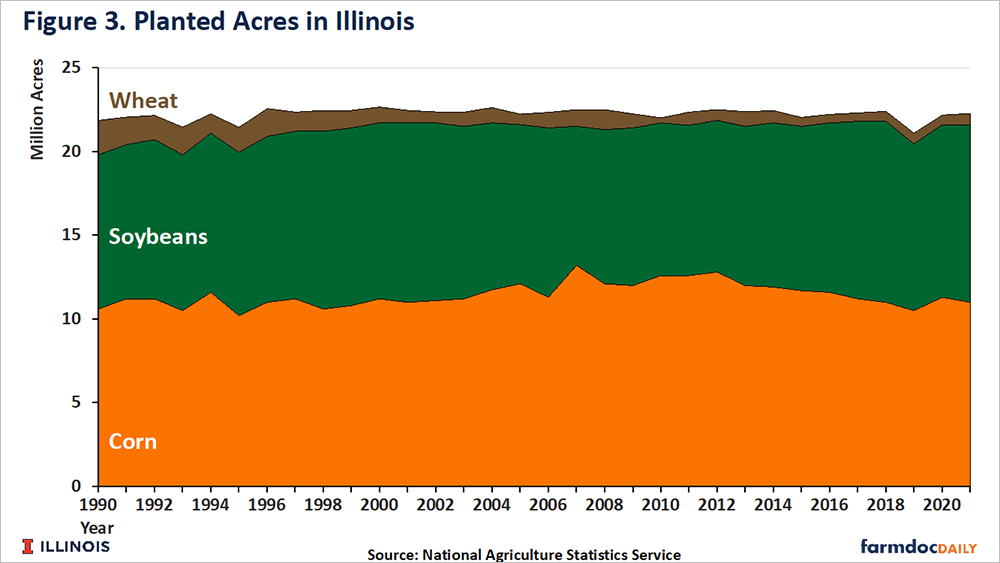 In Illinois, a double-crop soybean crop typically is attempted with a wheat crop. A stand-alone wheat crop almost always is not as profitable as corn or soybeans.

Fertilizer costs will play a key role in the relative profitability of corn, soybeans, and wheat in 2023, and a great deal of uncertainty exists concerning fertilizer prices. Table 1 shows estimates of fertilizer costs for crops grown in southern Illinois and on high-productivity farmland in central Illinois. 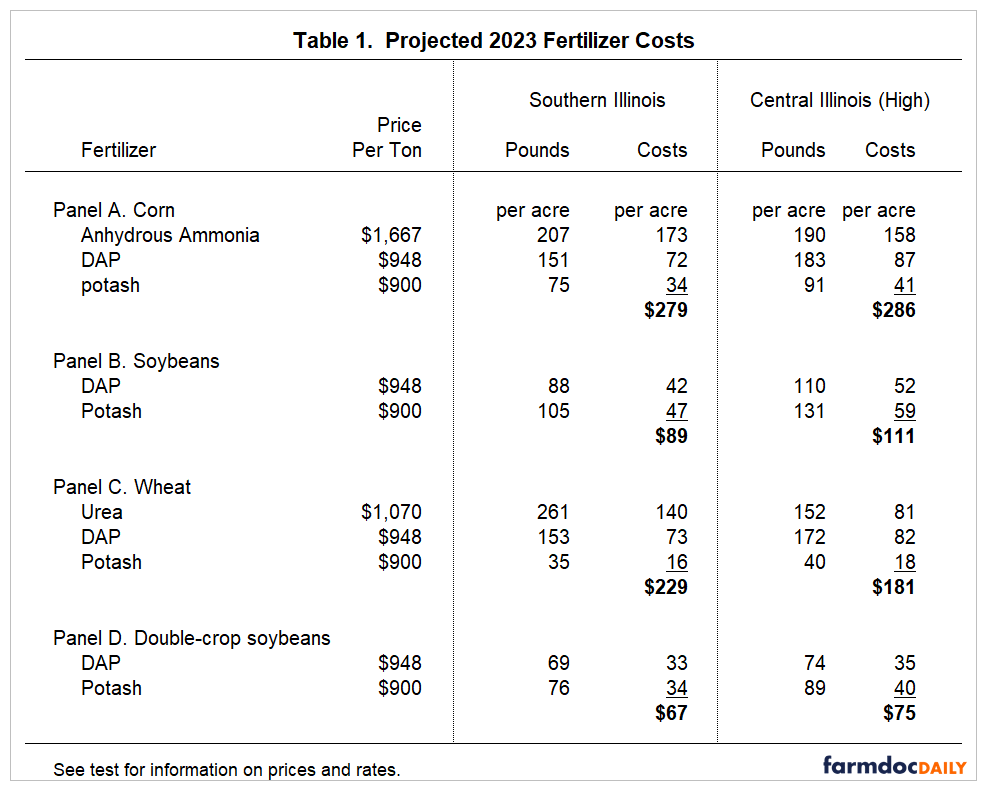 Per acre costs shown in Table 1 are based on:

Table 2 shows the 2023 budgets for southern Illinois. Operator and land return is projected at $243 per acre for corn, $217 per acre for soybeans, and $150 per acre for wheat. For these stand-alone situations, wheat has lower profitability than corn and soybeans. 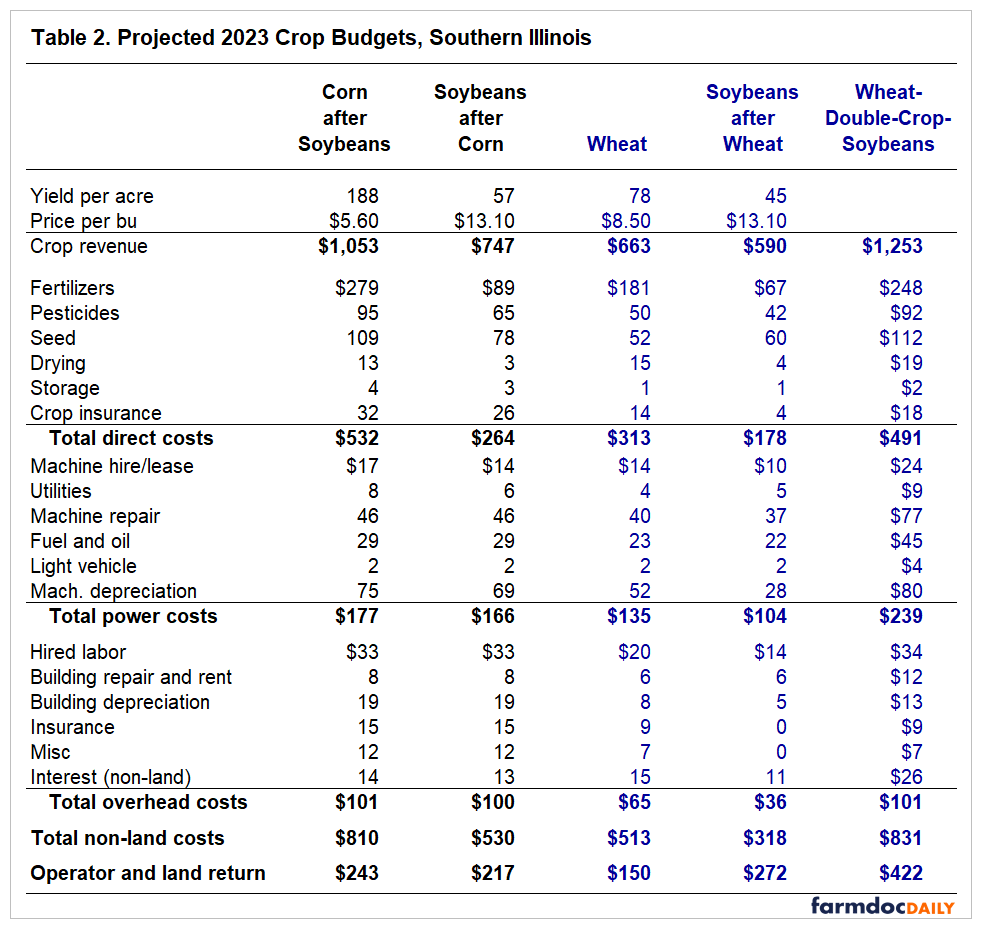 Double-crop soybeans have a return of $272 per acre. When combined with the $150 per acre return for wheat, the wheat-double-crop-soybeans combination has a return of $422, exceeding the return of both corn and soybeans.

From 2003 to 2021, operator and land returns from the corn, soybean, and wheat-double-crop-soybeans combination were:

From a historical perspective, the 2023 projected wheat-double-crop-soybean return is relatively high compared to corn and soybeans. 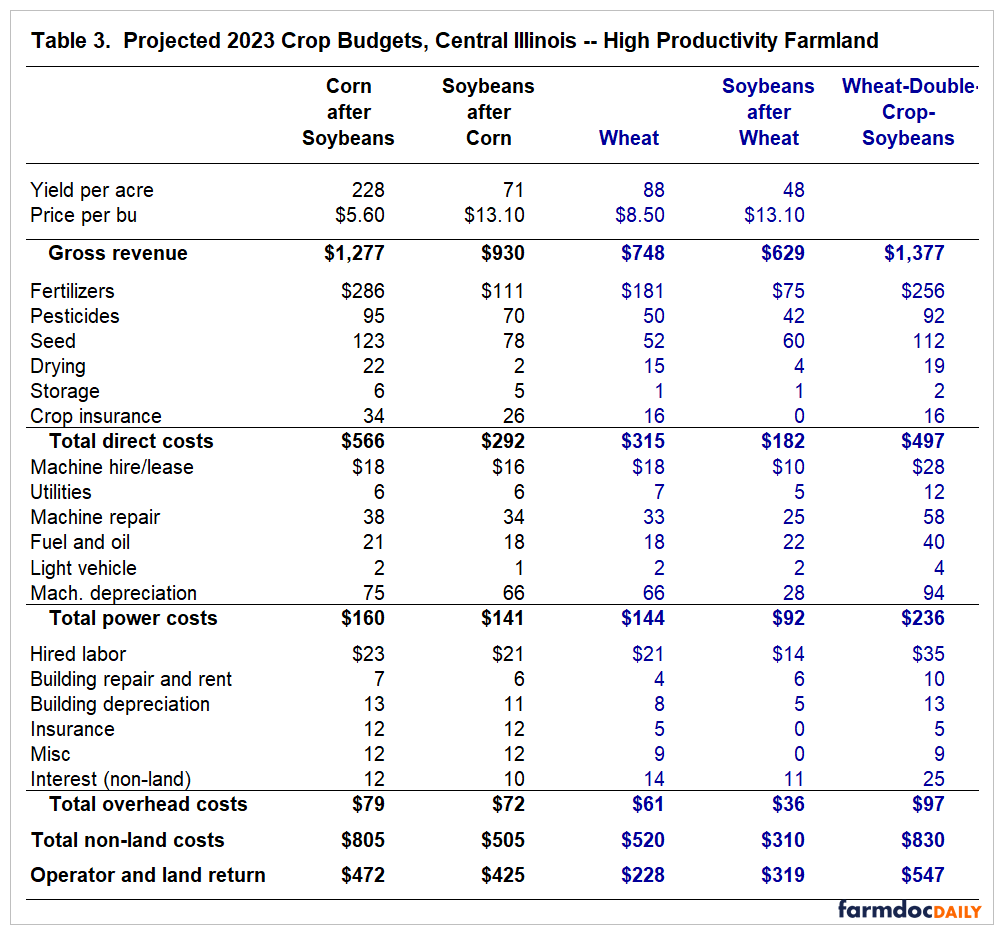 Operator and land returns are projected at:

Wheat-double-crop soybeans are projected as having higher returns than corn and soybeans in 2023. Note that the margins are close in central Illinois. A return to a 1.3 wheat-to-corn ratio resulting in a $7.28 wheat price, would result in wheat-double-crop-soybeans having a lower return than the $472 per acre for corn.

Wheat-double-crop-soybeans are projected to be more profitable than either corn or soybeans in 2023. Much can change between now and when wheat planting decisions occur. These budgets suggest that considering wheat in 2023 is reasonable, particularly in southern Illinois.

Wheat-double-crop-soybeans has both environmental benefits and rotational considerations.  The wheat will act like a cover crop, which has the potential to reduce nitrates leaving the fields. Often, rotational studies find that including nitrogen will increase subsequent corn yields.

Planting wheat in 2023 could require changes to 2022 production practices on corn and soybeans. Generally, the optimal time to plant wheat is in late September through October, depending on the region of Illinois. Therefore, planting hybrids and varieties that facilitate making this window could be beneficial. Herbicide programs also could impact the advisability of fall wheat planting.

Even given today’s prices, we do not find wheat as a stand-alone crop as a profitable alternative. Hence, consideration of only planting wheat likely will not result in higher returns.