The war in Ukraine is expected to expand wheat production in Argentina and Brazil, the primary wheat-producing nations in South America. Both nations will likely already increase wheat planting this season, which begins in May 2022. The high price of wheat after a significant shock to agricultural commodity markets caused by the Russian invasion of Ukraine is undoubtedly an incentive for increased planting of wheat in Argentina and Brazil, as well in the United States (see farmdoc daily March 29, 2022). However, high input prices, in particular the price of fertilizer, could partially offset the incentives for increased planting of wheat in South America.

Ukraine accounts for 10% of global wheat exports, and Russia 16% in the marketing year 2021/22, which began in July. The majority of Ukraine’s exports are shipped in the first few months of the marketing year. The closure of Ukrainian ports is limiting additional exports. Meanwhile, India and Australia are expected to increase exports to record levels since both have record crops and competitive prices (USDA, 2022). Global export and import volumes for wheat in 2021 are reported for the principal wheat-producing countries in Figure 1.

Argentina is the primary South American producer and exporter of wheat, accounting for about 7% of the global exports. Brazil, in contrast, is a prominent importer, mainly from Argentina (75%), followed by the United States (10%), and 15% from Paraguay, Russia, Uruguay, and Canada. The ongoing conflict in Ukraine has caused wheat supply and food security concerns for many major wheat importers that depend on Black Sea supplies. In this case, South American producers may increase supply to African countries. Argentina already has increased exports to Africa. Australia exports wheat to Southeast Asia, while Canada and the United States serve the European market.

Expectations for Planting in Argentina

Argentine crop farmers are currently planning wheat planting. In recent years, wheat has been assigned a larger share in crop rotations in the Pampas, the most important agricultural region in the country. The average wheat planted area in the last three crop years is 10% higher than the average in the three previous ones. Figure 2 shows that Argentine wheat production has trended upward in the past decade. The two components of production, planted area and yield, have increased significantly. 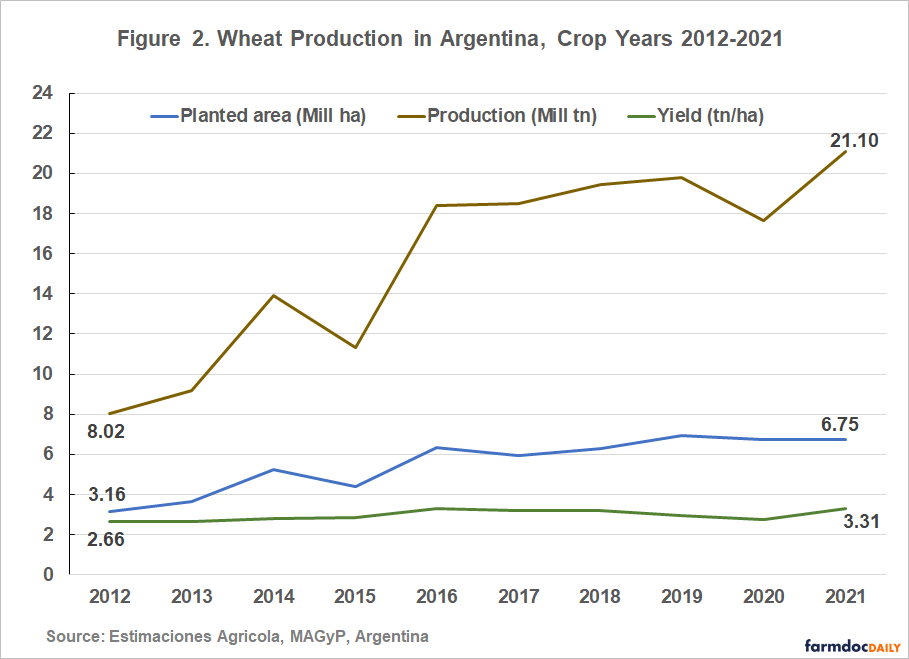 Some experts believe that wheat planting in Argentina this crop season could exceed the 6.75 million hectares planted in wheat in 2021. Argentina’s plantings of 6.75 million ha, or 16.7 million acres, are 36% of plantings that occur in the U.S last year. It is possible also that 2022 planting could be greater than the largest planting in the last 10 years (6.95 million hectares, in 2019). Given the availability of resources, an increase in wheat area is a possibility in Argentina, however, it will depend on the relative weights of the different factors influencing farmers’ planting decisions.

Argentina has three wheat-planting areas: North, Central, and South (Bolsa Comercio Rosario). The Central and Southern regions contribute more than 95% of the production. The planting season in these regions begins in the second half of May. As a result, the first accurate data for the Argentine wheat area will be available sometime in May or June.

Sixty to 65% of the wheat produced in Argentina is exported. Wheat exports make up 5% of the total value of Argentine exports. Wheat exports, together with other ag-exports, are key to the Argentine international trade balance. The wheat export market in Argentina is a private self-regulatory system, with the participation of exporters, flour mills, and grain elevators, with state surveillance.

There is a 12% export tax on wheat, as well as a mechanism regulating export quotas, and a trust fund. This recently created trust fund provides direct subsidies between private parties, with the goal being to ensure the prices for flour and noodles are offered within the framework of a price-control program (Precios Cuidados, in Spanish) in the domestic market. The volume of wheat reached by this fund trust is approximately 4% of wheat production. The Argentine government recently announced an expansion of the wheat export quota with “the goal of giving farmers predictability for the next wheat planting and reaching a new production record in the 2022 harvest.”

High wheat prices are undoubtedly an incentive for planting wheat in Argentina, together with the recent announcement of the increase in export quotas, and the availability of water in most of the wheat planting region. However, high input prices, in particular fertilizer prices, and the high prices of substitute crops, such as barley, could partially offset incentives for increasing the area planted in wheat.

The amount of land planted in wheat in Brazil has remained stable in recent years despite dependence on wheat imports. From 2013 to 2020, for instance, the acreage increased only 6% (see Figure 3). However, in 2021, because of the value of the dollar versus the Brazilian real, the wheat area increased to 7.8 million tons, above the decade’s average. Limited by the domestic market and climate problems, farmers did not have much incentive to plant more wheat the last few years. Figure 3 also shows the Brazilian yields during the last decade, with slight variations as a result of unfavorable weather in several crop seasons. 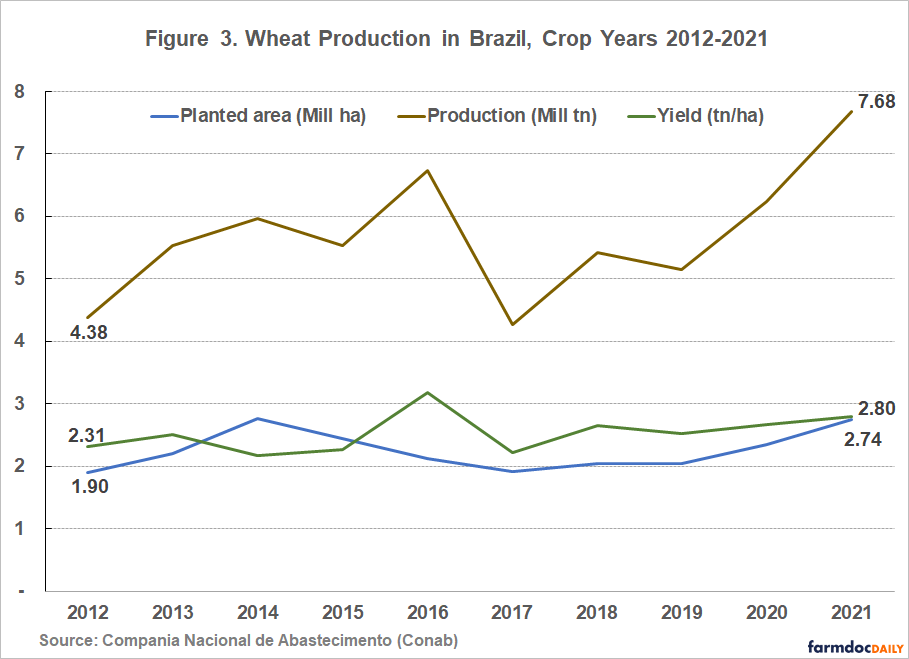 Wheat producers are looking at market opportunities because of the expectation of a lower world supply and changes to the term structure of futures prices as a result of the Ukraine-Russia conflict. According to forecasts from Safras & Mercado, a consulting company in Brazil, the planted area should increase by about 30% this season, which will begin in May. The company says that Brazil is expected to grow 3.6 million hectares of wheat, the largest area in the last 36 years. If the weather is favorable and average yields reach three tons per hectare, Brazilian production will be close to 10 million tons, according to Safras & Mercado. The Cogo Intelligence in Agribusiness, another consulting company in Brazil, projects a wheat planted area 20% higher than in 2021.

The increased planting will occur mainly in the southern states of Parana and the Rio Grande do Sul, which account for 87% of national production. In addition, there is space to expand the acreage in the new agricultural frontiers in Brazil, such as the Midwest and the Northeast. The Brazilian Agricultural Research Corporation (Embrapa) has been developing wheat seeds adapted to the Brazilian tropical climate. Some states already have good yields, while in others, Embrapa is still making adjustments to seek the best planting period and avoid rains at harvest.

There are some barriers to the growth of the wheat area in Brazil, such as the cost of production with fertilizers, as Brazil imports about 85% of its fertilizers (see farmdoc daily March 17, 2022). Wheat competes with corn in some areas of Brazil, and while the production costs of the two crops are similar, corn yields are higher than wheat. If the current water shortage continues, many producers may opt to grow corn later rather than wheat now. The expansion of the wheat area still depends on the supply of specific seeds. In addition, the weather in recent winter growing seasons has not been favorable to wheat growth.

The prospect of high prices for wheat has increased interest among Argentine and Brazilian wheat farmers. Figure 4 shows the evolution of wheat prices at Rosario Port in Argentina and Parana State in Brazil since the 2017 crop year. The values shown are average harvest prices for crop years 2017-2021. For 2022, the prices shown are average March prices. Current price levels are 54% and 61% above the five-year average from Brazil and Argentina respectively, and 16% and 32% higher than last year’s harvest price in both countries. Argentina’s 2022 futures price is $283 per ton (Brazil uses Argentina’s futures prices as the reference price). 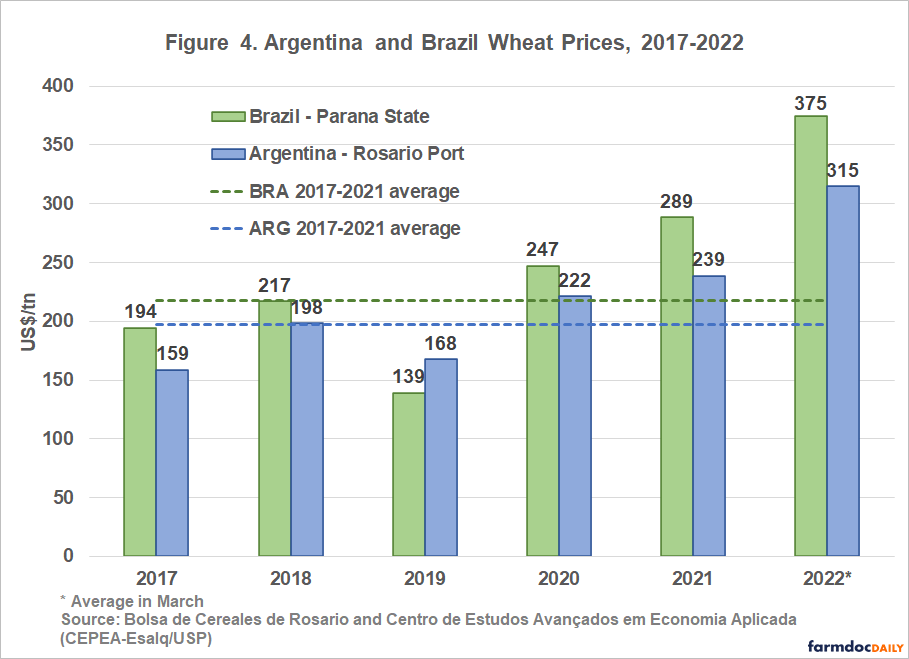 Despite the high prices, South American farmers are concerned about farm-input shortages and high fertilizer prices. Fertilizer prices have more than doubled since the previous planting season in 2021 and continue to climb. So, farmers need excellent yields to achieve good economic results.