The Food and Agriculture Organization (FAO) of the United Nations maintains a database of the use, production, and trade of the three major fertilizer nutrients: nitrogen, phosphate, and potash. Table 1 shows the nitrogen data for 2019, the last year in which data is available. Nitrogen statistics are given for the top 20 countries in nitrogen use, along with a total for all countries in the European Union (EU). Values in the table are stated in terms of million metric tons of actual N, and include:

Data are collected through questionnaires administered by the FAO. These are estimates of fertilizer use, production, and trade. As such, they will vary from actual values and other sources. While estimates, the FAO values provide a valuable gauge of the relative size of importers and exporters. Data shown in Table 1 are for 2019. Analysis of earlier years indicates that the same countries remain as large importers or exporters. 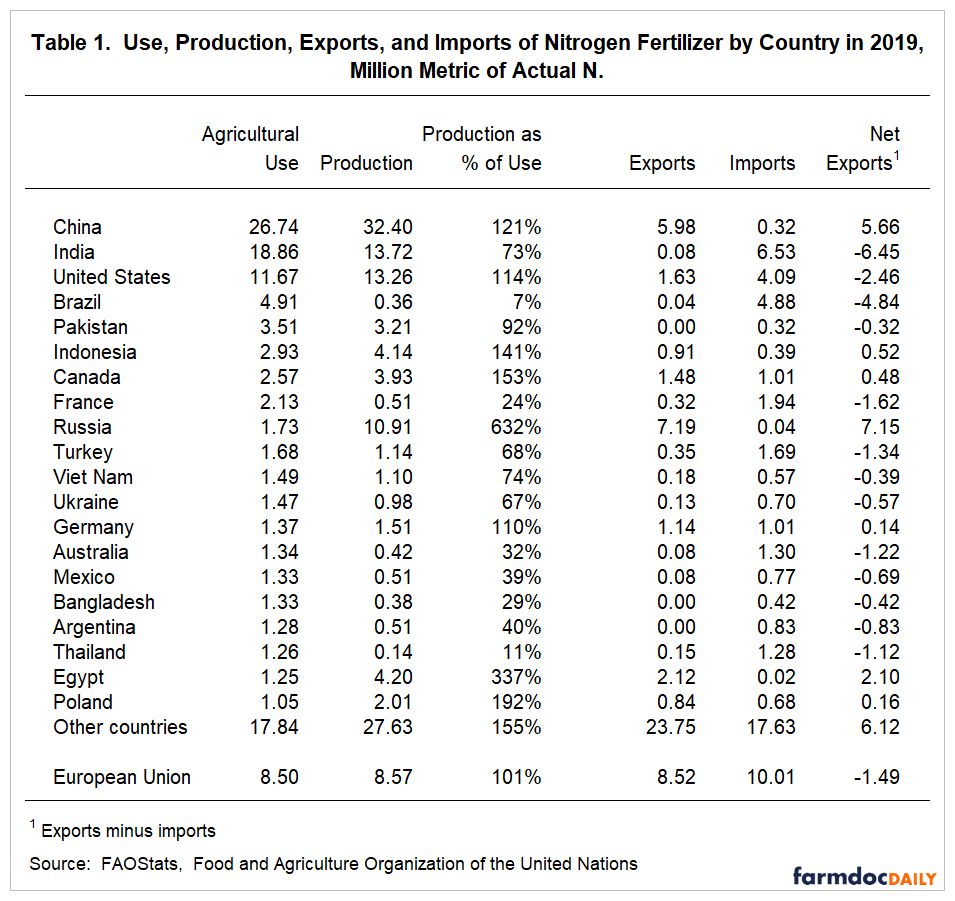 Countries are arranged from highest to lowest agricultural use. Highlights of the top four countries are:

Figure 1 shows net exports of nitrogen for 2019. Countries in blue are net exporters meaning that nitrogen moves from that country to other counties. The nine countries with over a 1.0 million tons of net exports:

Counties in orange in Figure 1 are importers. In 2019, the countries that were the largest importers were: 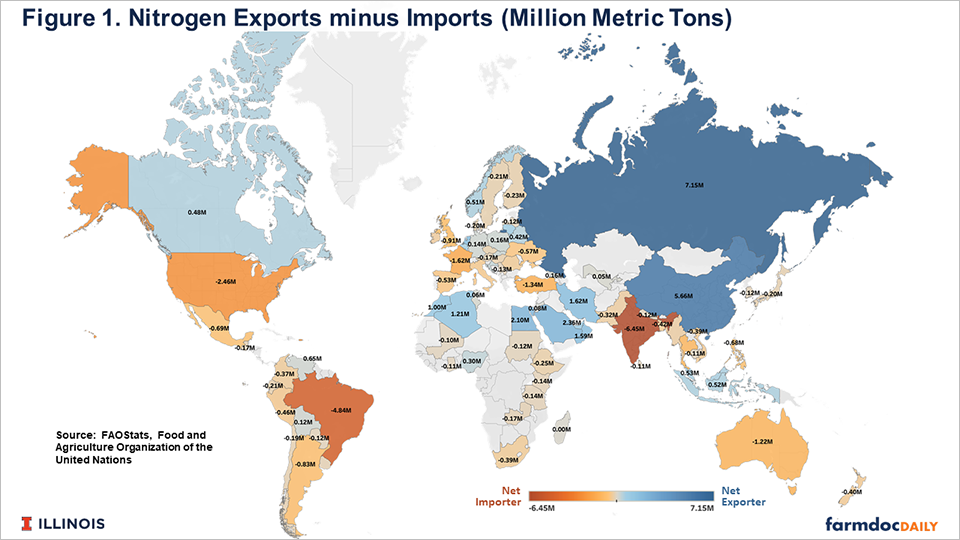 The Ukraine-Russia war could have significant impacts on global nitrogen fertilizer trade. Fertilizer exports from Russia, the world’s leading nitrogen fertilizer exporter, could be reduced because of the war. This could occur via direct disruptions to the physical flow of goods due to the war as well as sanctions on Russian exports by trade partners.  How much of a reduction this will create remains to be seen. However, given Russia’s 21% share of exports, significant reductions would be difficult for other major exporters to completely offset. Alternatively, some countries could ban Russian fertilizer imports while others do not, causing substantial changes in nitrogen flows worldwide. In either case, nitrogen fertilizer prices would increase, with explosive increases more likely as the extent to which Russian export flows are limited increases.

There likely will be larger and more complex impacts of the Ukraine-Russia war on nitrogen fertilizer production than those outlined above. Suffice it to say:

Nitrogen producers outside the above supply-deprived countries will likely expand production, partially offsetting lost production. Still, production constraints exist, with a limited number of nitrogen-production facilities available, all of which have production limits. As a result, large reductions likely cannot be made up, which will lead to price increases to induce rationing.

Impacts on North and South America

Other countries in the Western Hemisphere also have similar issues as Brazil. Argentina, for example, imports much of its nitrogen fertilizer, likely adding additional needs for fertilizer.

Reductions in the supply of nitrogen fertilizers from Russia, the E.U. and other countries will have rippling effects worldwide.  While it is doubtful that sanctions will interrupt a large part of nitrogen exports, some reduction seems likely. How big the price response depends on reductions from Russia and Western Europe. A significant supply decrease from Russia and Western Europe will result in a chain reaction of events that will likely increase worldwide prices. Farmers in the United States should expect to see increasing nitrogen fertilizer prices.