Before discussing long-term relationships between general inflation and farm input prices, it is important to define key terms.  Inflation represents the decline in purchasing power of a currency over time (Investopedia, 2022).  Quantitative estimates of the rate of inflation are typically made by examining the increase or decrease in the price levels of a basket of selected goods.  Inflation measures include the consumer price index and implicit price deflators.  Though computed using different methodologies, inflation measures are highly correlated over time.  Most economists would agree that an increase in the supply of money is the root cause of inflation.  Inflation mechanisms can be classified into three types: demand-pull inflation, cost-push inflation, and built-in inflation (Investopedia, 2022).  When an increase in the money supply increases overall demand more than the productive capacity of an economy, we have demand-pull inflation.  When production costs increase prices, we have cost-push inflation.  Quality improvements and technological change are often incorporated into cost-push inflation.  Quality improvements would increase prices while technological change tends to reduce prices.  Finally, when individuals expect current inflation rates to continue in the future, we have built-in inflation.  In general, the longer above average inflation rates persist, the more important built-in inflation becomes.  All three of these types of inflation mechanisms are contributing to the recent surge in inflation.  It is important to note that inflation has been particularly high in the U.S. compared to other countries.  A recent publication from the Federal Reserve Bank of San Francisco discusses why this is the case (Jorda et al., 2022).  According to the authors of the article, recent increases in inflation in the U.S. are due to problems with global supply chains and changes in spending patterns due to COVID-19 as well as fiscal support measures designed to counteract the economic effect of the pandemic (i.e., demand-pull inflation).

As noted above, input price changes in production agriculture and other industries are due to general inflation and its mechanisms as well as supply and demand fundamentals specific to a particular input.  Having said that, some inputs are more closed aligned or correlated with general inflation than other inputs. 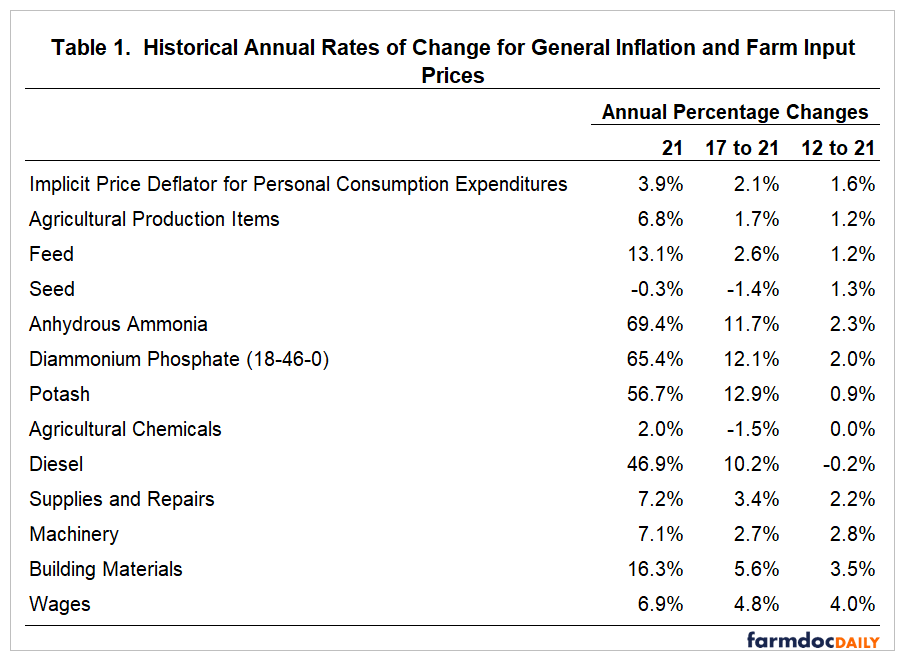 Due to surges in prices in the last few months, the averages for 2021 in the previous section underestimate recent phenomena.  To compensate for this fact, we computed average price changes using the latest available 12 months of data for inflation and the farm inputs discussed in the previous section.  The results are illustrated in Figure 1.  All of the price changes illustrated in Figure 1 were computed using data from February 2021 and February 2022.  The percentage change in the implicit price deflator was 6.4 percent.  We have not experienced this level of inflation in the U.S. since 1981.  The price changes for seed and wages were below the annual price change for the implicit price deflator.  The price changes for the other farm inputs displayed in Figure 1 were greater than 10 percent, with anhydrous ammonia leading the charge with a year to year increase of 179 percent.  A 100 percent increase represents a doubling of price, thus the prices of anhydrous ammonia and potash more than doubled in the last 12 months.  The results in Figure 1 can be used to help explain why the breakeven prices for corn and soybeans are expected to increase approximately 25 and 15 percent, respectively, from 2021 to 2022. 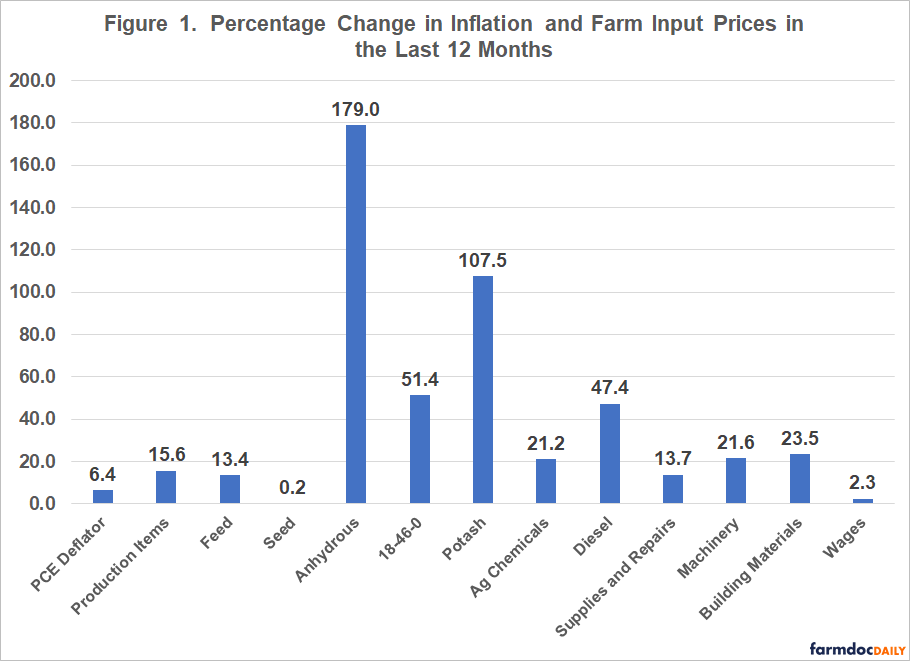 Of the input prices examined, only seed and wages had a rate of change during the last 12 months that was lower than the rate of change for general inflation.  Agricultural production items, a general index for farm input prices, increased 15.6 percent or more than double the general inflation rate.  Input prices changes for energy and fertilizer products were particularly large.  During the last 12 months, diesel prices increased 47 percent.  Increases in fertilizer prices ranged from 51 percent for diammonium phosphate to 179 percent of anhydrous ammonia.