Cold and wet weather has delayed the normal pace of corn planting this spring.  The latest weekly Crop Progress report from the USDA indicates that only seven percent of the 2022 U.S. corn crop was planted as of April 24th and just two percent in Illinois.  The normal pace for this week is 15 percent for the U.S. and 21 percent for Illinois. A key concern in the market is the impact that planting delays may have on the U.S. average yield of corn.  There is heightened interest in this question at the present time given the tight global supply and demand situation for corn and near record high prices.  We reviewed data from agronomic field trials in a recent farmdoc daily article (April 14, 2022) and this data indicates there are substantial yield penalties for late planting of corn beginning around mid-May.  In another recent farmdoc daily article (April 21, 2022), we showed that maximum planting rates per suitable field day in the heart of the Corn Belt have increased very little over time and that it still takes a minimum of about 14 days, or two weeks, to plant the corn crop.  The purpose of this article is examine what we know about the relationship between late planting and the U.S. average yield of corn.

The starting point for the analysis is defining the beginning date for a significant late planting penalty for corn yields.  There is not complete agreement on the optimum planting window for maximizing corn yields or the date when late planting begins to impose a substantial yield penalty.  Both the optimum window and cutoff date for a significant late planting penalty also varies by geographic location.  For market analysis purposes, however, it is useful to identify one date for the end of the optimum window that can be applied to the entire Corn Belt.  Acreage planted after that date would be considered to be planted late and yield potential would be expected to be reduced as the percentage of the acreage planted late increases.

In order to set the cutoff date for late corn planting in the U.S., we follow our previous work on the topic (e.g., farmdoc daily, May 20, 2015; April 24, 2019; May 13, 2020).  The cutoff date is based on agronomic field trials relating planting date to corn yields at the farm-level (e.g., farmdoc daily article, April 14, 2022), which indicates that yield penalties become increasingly large as planting is delayed after mid-May.  As before, we define the beginning date for substantial late planting penalties on corn yield in the U.S. to be May 30th from 1980 through 1985 and May 20th from 1986 onwards.  The change in cutoff dates in the mid-1980s reflects recommendations for earlier planting that appeared around that time.

Figure 1 shows the percentage of corn planted late in the U.S. based on these definitions over 1980 through 2021.  On average, late planting was 17.6 percent, with the bulk of the observations between about 5 and 25 percent.  The extraordinarily high level of late planting in 2019 is obvious.  At 50 percent, this was the highest level of late planting over the 42-year sample period.  There were only two other years (1993 and 1995) when late planting exceeded 40 percent. Finally, there is no evidence of a trend up or down over time in the late planting percentage, which suggests that producer behavior in aggregate with respect to late corn planting has been quite stable (after adjusting for earlier planting through time). 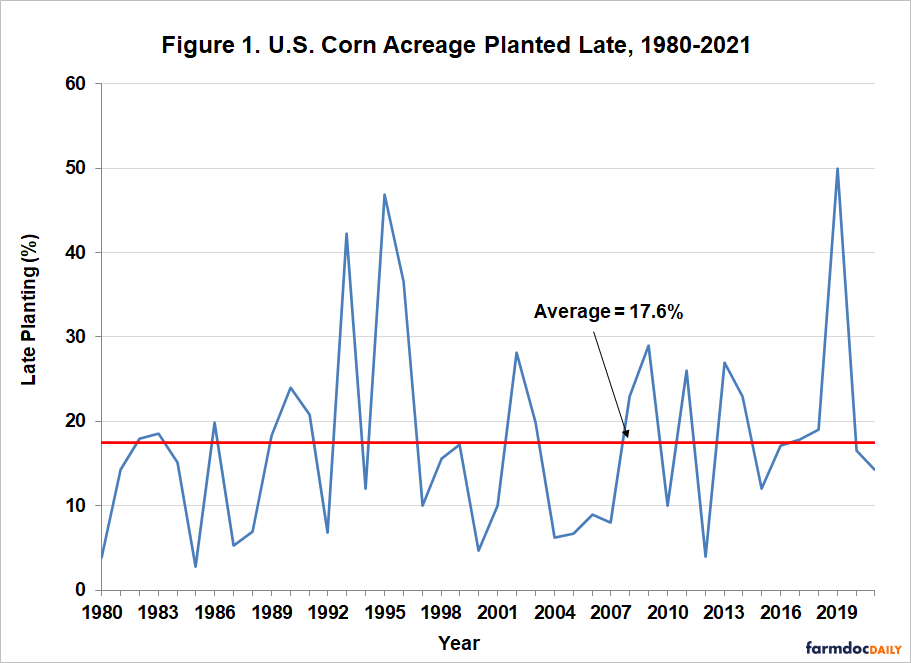 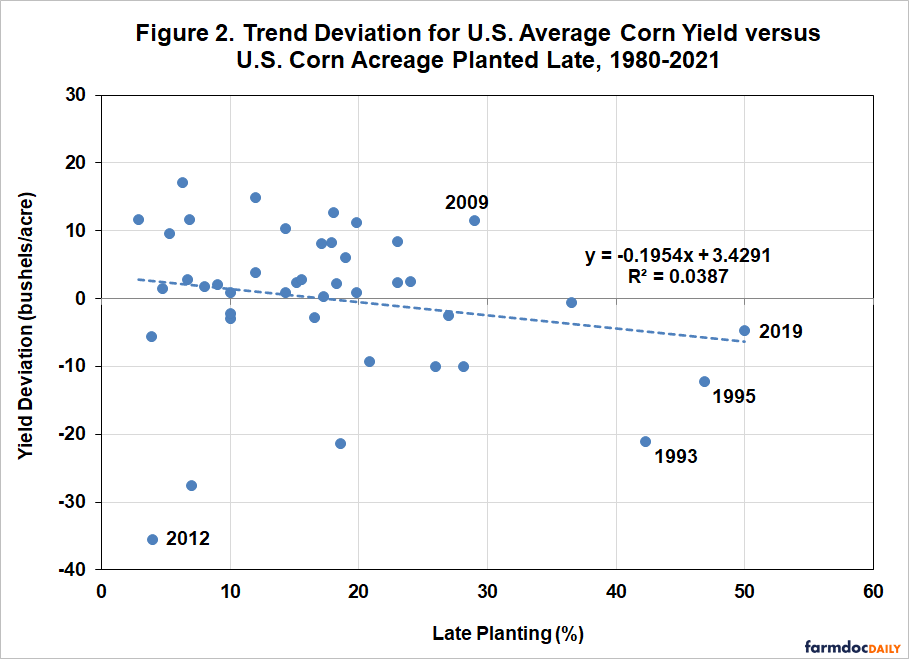 It is important to emphasize that the explanatory power of the regression model in Figure 2 is quite low, as the R2 is only 3.9 percent.  Because of this low explanatory power, the regression model in Figure 3 should be treated with a good deal of caution.  This does not mean that late planting should be ignored when projecting corn yield, but rather, other factors, in particular summer weather, are much more important in explaining deviations from trend yield (e.g., Nielsen, 2015).  Two years provide good examples.  Late planting was well-above average in 2009 but the corn yield was a record at the time due to a cool, wet summer.  Conversely, late planting in 2012 was at the very low end of the sample range but corn yield was extremely low relative to trend due to the severe drought that summer. 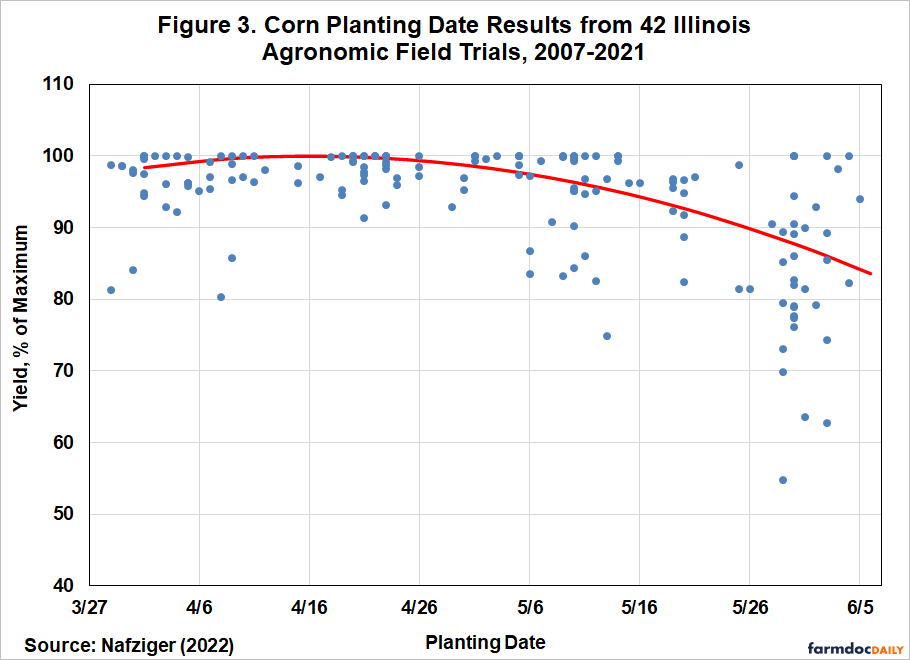 Since several factors influence the magnitude of the U.S. average corn yield in any given year, particularly summer weather conditions, it is important to jointly consider all of the relevant factors in order to quantify the impact of late planting.  In technical terms, this means that the regression model in Figure 2 may suffer from “omitted variable bias.”  We addressed this problem by estimating a crop weather regression model in earlier work (farmdoc daily, May 13, 2020) that relates the U.S. average corn yield to trend, the percentage of the crop planted late, and an array of weather variables.  The regression model estimates indicate that the U.S. average corn yield decreased by 2.2 bushels per acre for each 10 percent of the crop that is planted late, very close to the estimate from the simple bivariate model presented in Figure 2.  For all practical purposes, they are nearly the same at about -0.2.

A final issue is the apparent small size of the late planting impact estimated for the U.S. average corn yield found in Figure 2 compared to the late planting impacts from agronomic field trials.  For comparison, Figure 3 shows the results of agronomic field trials for corn planting dates in Illinois that was presented in this recent farmdoc daily article (April 14, 2022).  The trial data indicate that the yield of corn planted past mid-May can be reduced as much as 10 to 20 percent.  If was assume a U.S. average trend yield for corn in 2022 of 179 bushels per acre, this could then be used to project yield reductions of 18 to 36 bushels per acre below trend for the corn planted past mid-May, with large resulting impacts on the U.S. average yield of corn.  Or one could try to estimate an average yield penalty for the entire U.S. based on the planting date response curve in Figure 3.  This would involve computing, say, the percentage of the corn crop planted before and after mid-May, and then imposing the average yield penalty in those two periods from Figure 3.

While it is tempting to map yield penalties from agronomic field trials directly to projections of the U.S average yield for corn this is not appropriate for several reasons.  First, the planting trial results are specific to particular planting dates, whereas the U.S. late planting variable is the percentage of the crop planted after a particular cutoff date.  Second, the planting trial results are reported as the percentage of maximum yield in a test location for the given year, which is not the same as deviation from trend yield.  The maximum trial yield in any year can be far above or below trend yield for the state or the entire U.S., and the maximum varies across trial locations.  Third, the planting trial results, while thought to be representative, are still state and location specific.

There is, of course, always the possibility that our selected measure of late planting is a poor measure of impacts on the U.S. average yield of corn.  We have tested numerous measures in the last 15 years (e.g., Irwin, Good, and Tannura, 2008) and have not been able to find a better one at the national level.  Until compelling evidence of a better measure becomes available, we are left with the result that late-planting is very much a secondary consideration when projecting the U.S. average yield of corn.  The big show remains summer weather.

Hubbs, T. and S. Irwin. “The Impact of Late Planting on U.S. Average Corn Yield.” farmdoc daily (10):88, Department of Agricultural and Consumer Economics, University of Illinois at Urbana-Champaign, May 13, 2020.

Irwin, S. “What Do We Know About How Long It Takes to Plant the U.S. Corn Crop?“ farmdoc daily (12):54, Department of Agricultural and Consumer Economics, University of Illinois at Urbana-Champaign, April 21, 2022.

Irwin, S., D. Good, and J. Newton. “Early Planting and 2015 Corn Yield Prospects: How Much of an Increase?“ farmdoc daily (5):93, Department of Agricultural and Consumer Economics, University of Illinois at Urbana-Champaign, May 20, 2015.