The data in this article are from the US Department of Agriculture, Foreign Agriculture Service website, Production, Supply, and Distribution online (PSD).  Grain crops are barley, corn, millet, mixed grains, oats, rice, rye, sorghum, and wheat.  Oilseed crops are copra, cottonseed, palm kernel, peanuts, rapeseed, soybeans, and sunflowers.  Harvested area is not reported for copra and palm kernel.  These two crops are thus not included in the calculation of aggregate yield.  The analysis starts with the 1975 crop year for several reasons.  PSD data for peanuts does not start until the 1972 crop year.  Price variability increased over 1972-1974 as expanding world demand eliminated surplus stocks, the US planted land previously removed from production by farm programs, and the 1973 farm bill changed US farm policy to give markets a greater role in determining prices. 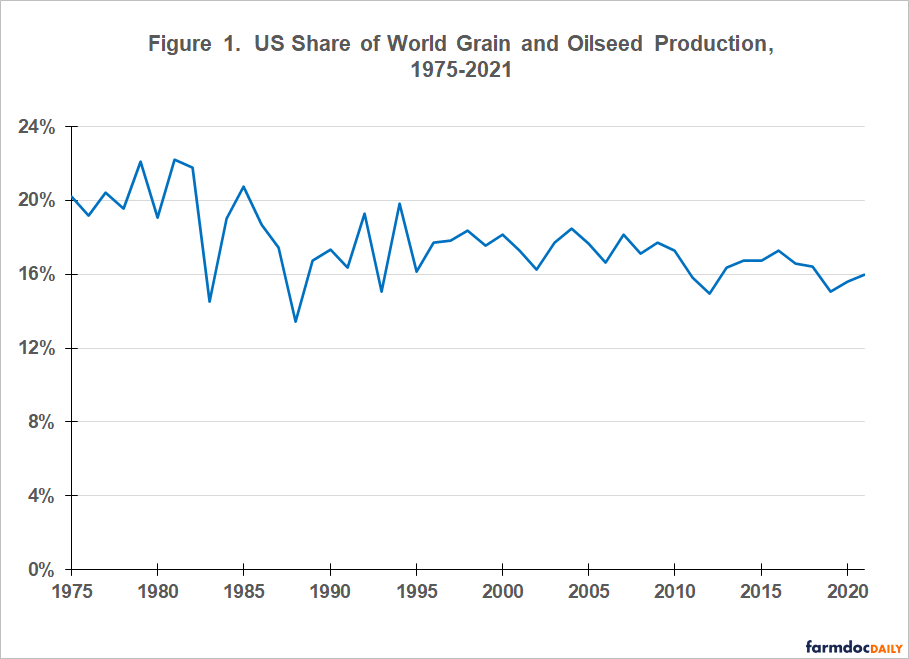 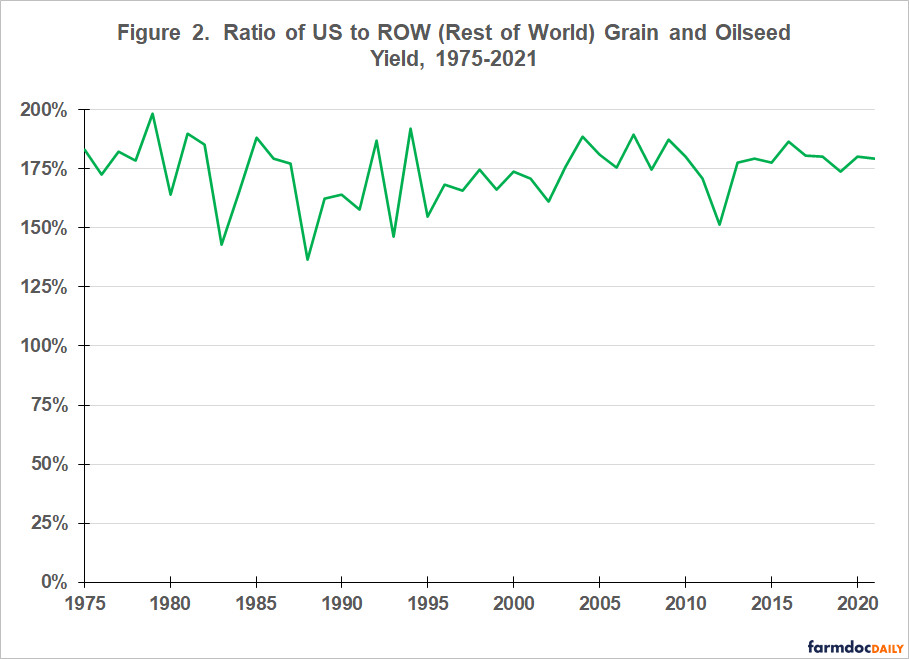 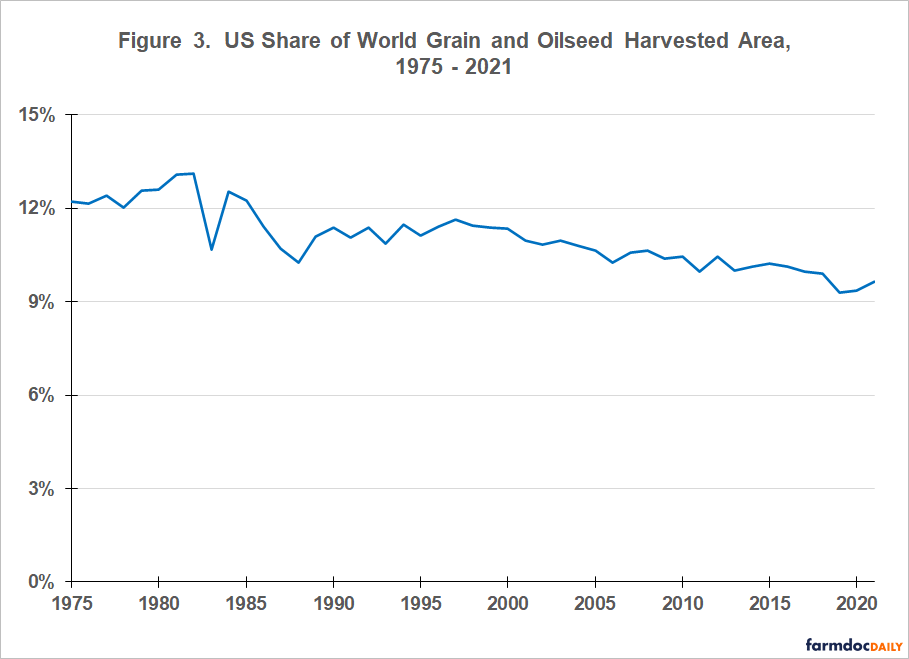 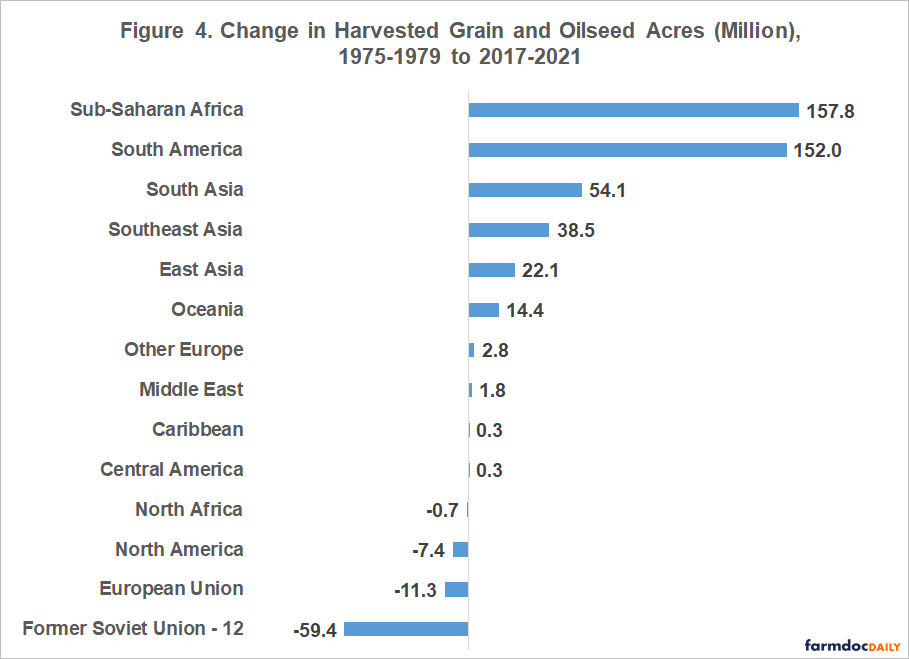 Grain and oilseed acres declined in only 4 regions, including North America.  The US accounted for all of the decline in North America.  US annual acres declined by 18 million (from 249 to 231 million).  Perhaps more revealing, over the crop prosperity period of 2007-2013, there was no net increase in US acres outside of fewer acres in CRP (Conservation Reserve Program).  CRP acres declined by 11 million while US harvested acres increased only 8 million.  Over 25 million acres remained in CRP as of 2014.  In contrast, ROW harvested acres increased 159 million from 2007 to 2014.  This increase accounted for 42% of the increase in ROW grain and oilseed acres from 1975-1979 to 2017-2021.

CRP draws lots of attention, but the numbers in the preceding paragraph suggest the story is much bigger.  Part of the story is the role of sodbuster and swampbuster.  These farm bill provisions deny certain farm program benefits for breaking out new lands or draining wetlands for crop production.  Another part of the story is that, despite the crop prosperity of 2007-2013, returns never got high enough for long enough for farmers to feel comfortable incurring the costs to bring new land into production.  A potential implication of the bigger story is that the US has reached a cropland acreage maximum given societal support of existing environmental regulations and programs.

An important strategic question exists for US agriculture.  “Does US agriculture want to address its declining role in world grain and oilseed production?”  If the answer is “yes,” the US must confront its acreage question.

The US acreage question reflects the interplay of agro-climate, market, and policy considerations.  A realistic assessment of these factors is that US share of world grain and oilseed production can be increased substantially only by multi-cropping existing acres, implying a need to focus research on the development and management of shorter season crop varieties and cropping systems.