Farmers will face much higher fertilizer prices to begin the 2023 planning season. For 2022, farmers who purchased fertilizer early had much lower fertilizer costs than those who purchased later as prices increased. The same increasing trajectory may not occur this year, and prices could be lower next spring. Farmers purchasing fertilizer early may wish to price a portion of corn production to cover costs. Splitting nitrogen fertilizer applications also is a risk management strategy. Farmers planning on any post-planting nitrogen application may wish to mitigate risks by purchasing Post Application Coverage Endorsement (PACE), a crop insurance product that compensates for losses when nitrogen cannot be applied after planting (farmdoc daily, January 18, 2022). 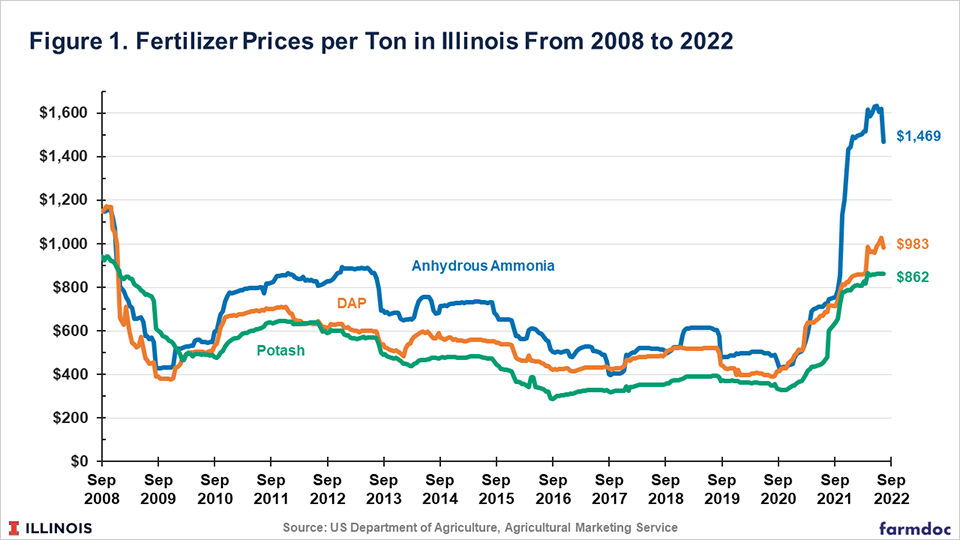 Much of the increase in fertilizer prices occurred before the onset of actual fighting in Ukraine in February. At the end of January 2022, anhydrous ammonia prices were $1,497 per ton. Ammonia prices then rose by a relatively modest amount, reaching a high point of $1,636 per ton on June 2. Prices then declined to $1,469 per ton on July 14, falling slightly lower than the pre-invasion January 2022 month-end price. DAP and potash remain slightly higher than January 2022, but as with anhydrous ammonia, a majority of the increase came before the Russian invasion in Ukraine.

For 2022 production, farmers who purchased early had much lower fertilizer prices than those who purchased later in the season (fall 2021 to spring 2022). For example, anhydrous ammonia could have been purchased in the $700 to $800 per ton range in the late summer/early fall of 2021. Those prices then rose continually, reaching almost $1,500 per ton by the end of the year and remained about $1,400 per ton throughout the spring. This year, farmers will not have the opportunity to purchase fertilizers at the comparatively lower prices of late summer 2021.

Since the Ukraine-Russia conflict began, fertilizer prices have stabilized or declined slightly, and fertilizer supplies in the western hemisphere appear to be adequate. Like fertilizer, grain markets also have stabilized. For example, prices on the December 2022 corn contract and November 2022 soybean contract on the Chicago Mercantile Exchange (CME) rose after the Russian-Ukraine conflict and now, in July, have reached levels similar to those before the conflict. Overall, markets appear to have absorbed the impacts of the Ukraine-Russia conflict.

Still, geopolitical events likely will continue to have impacts on fertilizer prices. Currently, Western Europe continues to struggle with natural gas supplies from Russia. Gazprom, a Russian natural gas company, has slowed natural gas flows to Europe for the stated reason of a need to do maintenance on pipelines. As a result, concerns exist about a complete shutdown of natural gas from Russia to Western Europe (The Economist, July 11, 2022). A shutdown will raise natural gas costs, which will at the least increase the costs of producing nitrogen fertilizers in Europe. It could also trigger a major recession, which then would have ramifications across all grain and fertilizer markets.

Similarly, China will play a role. China is a major fertilizer exporter that could impose restrictions on fertilizer exports. Similar to western Europe, there are concerns of a Chinese recession, mainly related to China’s restrictive Covid-control policies. A recession would have a negative impact on grain sales to China, which could then result in lower grain prices in the U.S.

Overall, the two major factors that are associated with anhydrous ammonia prices in the U.S. are natural gas prices and corn prices (see farmdoc daily, December 14, 2021). As a major cost in nitrogen fertilizer production, increases in natural gas prices tend to increase nitrogen fertilizer prices. In recent months, the natural gas price at Henry Hub has increased, reaching a monthly average of $8.14 per million BTUs in May and $7.70 in June. These prices are well above recent averages (see Figure 2). The last time prices were at these levels was in 2008. 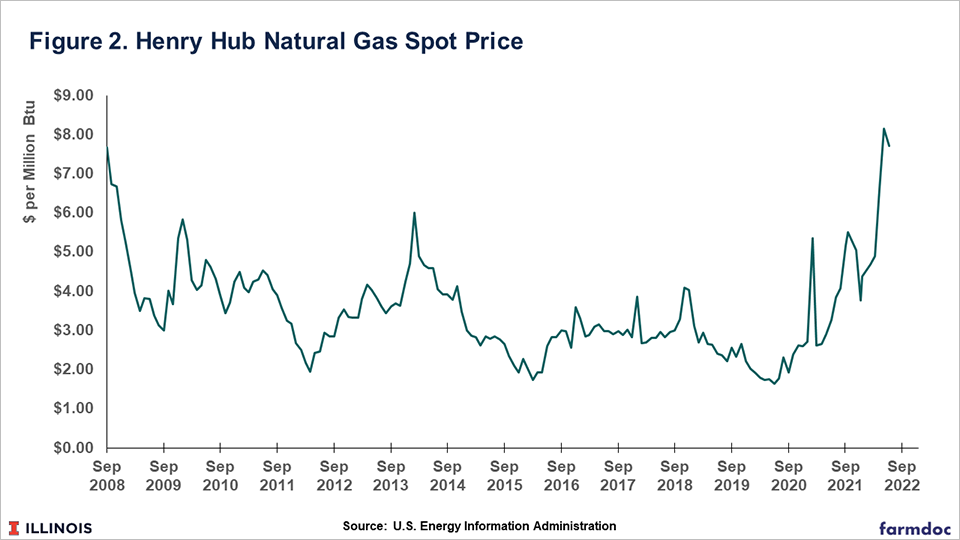 Last year, farmers who purchased nitrogen fertilizer early received lower prices. No guarantee exists that the same will happen for 2023 production. Figure 3 shows the change in fertilizer prices from the price in August for each month to the following July. The red series represents the average change from August to each following month for the years from 2008 to 2022. Figure 3 also shows the difference in price relative to August for the two largest outlier years, 2021-2022 in dark blue and 2008-2009 and light blue. In August 2021, the anhydrous ammonia price averaged $749. In November 2021, the average price was $1,274, or $526 higher than the August price. 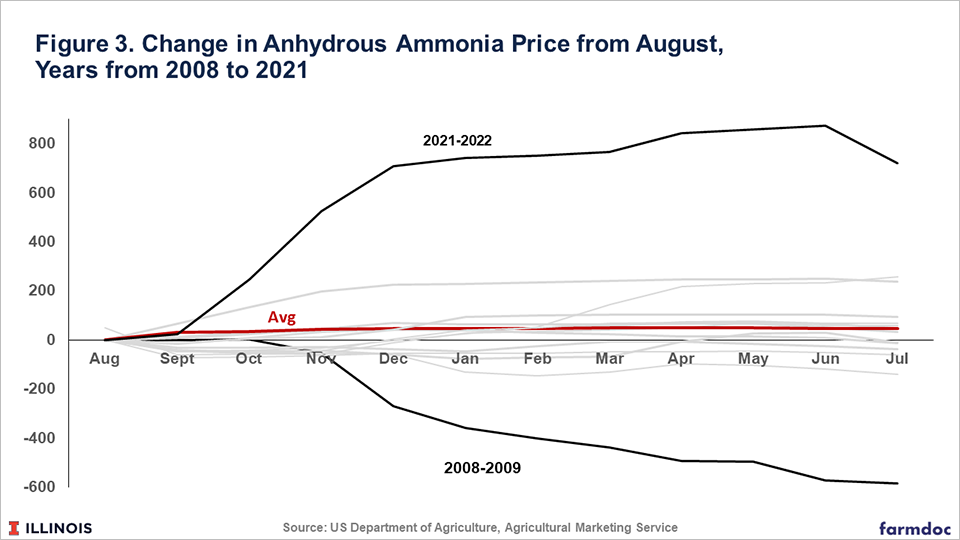 Overall, farmers will face much higher fertilizer prices than year-earlier levels. As always, uncertainty exists in the market, perhaps with heightened levels for 2023 production. Given this uncertainty, farmers who purchase nitrogen in late summer/early fall may wish to price 2023 production of corn. High corn prices are needed to cover the high nitrogen prices. If sales are not made at the same time, corn prices could decline between the time of the nitrogen purchase and the time of corn sale.

Some farmers may wish to wait to purchase nitrogen. Others may choose to split nitrogen applications, with some of the applications done in fall and some done in spring to spread price risk. If considering post-planting application, farmers may wish to consider the PACE, a crop insurance product that is an endorsement to the COMBO product. That endorsement will cover financial losses if nitrogen cannot be applied post application due to causes covered by the policy.

Break-even prices likely will be much higher in 2023 – near $5 per bushel for corn and $11 per bushel for soybeans (see farmdoc daily, December 21, 2021). Continuing high fertilizer prices and increases in all production costs point to the need for high corn and soybean prices to remain profitable.

“Europe Is Preparing for Russian Gas to Be Cut off This Winter.” The Economist, July 11, 2022. https://www.economist.com/europe/2022/07/11/europe-is-preparing-for-russian-gas-to-be-cut-off-this-winter