Based on Illinois Farm Business Farm Management Association (FBFM) records, average farm operator returns for labor and management on 2,053 Illinois farms was higher for all geographic areas in the state in 2021 compared to 2020 and above the average for the last five years.  Higher corn and soybean yields, along with higher grain prices were the main reasons for the higher incomes because they more than offset higher costs.  Hog and beef returns increased with higher prices received while returns to dairy enterprises were lower due to higher feed costs with stable milk prices. 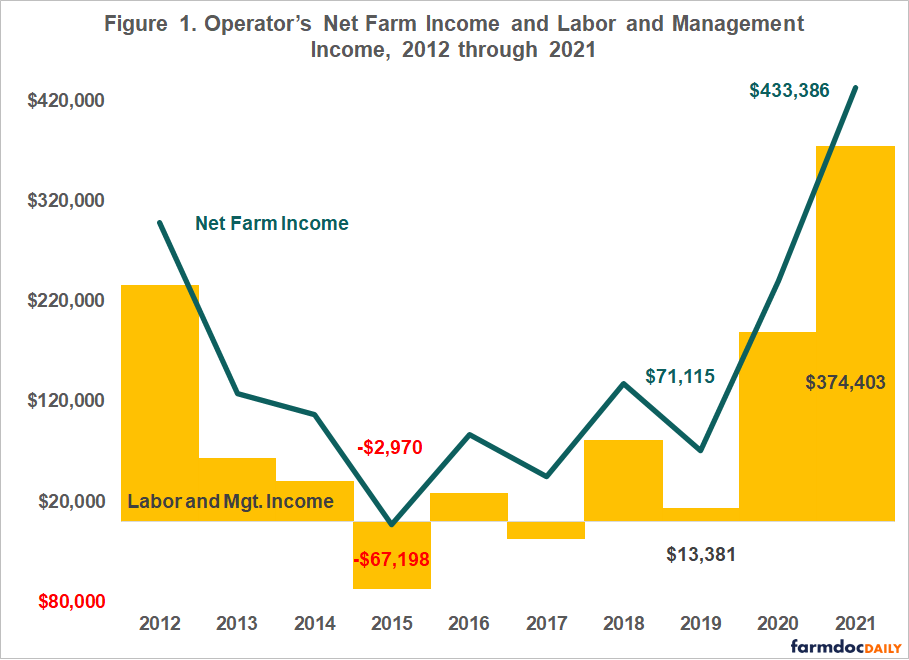 Wages earned by farm operators were highest on hog farms followed by beef, grain and dairy farms.  Returns to operator’s labor and management averaged $707,451 on hog farms, $409,800 on beef farms, $385,959 on grain farms and $106,294 on dairy farms.  Farms classified as grain farms were 93 percent of all farms while hog farms comprise one percent of the total.  Livestock farms many times also include returns from grain production as well.  Thus, most livestock farms, besides dairy farms, had higher returns than grain farms due to having higher returns from grain and livestock on those farms.

Costs to Grow Corn and Soybeans

Returns above feed cost was higher than the year before for all livestock enterprises except dairy enterprises.  Also, except for dairy, returns to all five enterprises in 2021 were above the last five-year average.  All livestock enterprises experienced higher feed costs in 2021 compared to 2020.  Higher pork prices were the main factor for the higher hog returns. Returns for farrow-to-finish hog producers were estimated to be about $5 per hundredweight above the breakeven level in covering total economic costs in 2021.  Dairy producer’s experienced lower returns due to higher feed costs that were not offset with similar increase in milk prices, $2,269 returns above feed per cow in 2021 compared to $2,736 in 2020.  Milk prices were less than one percent higher while feed costs were 12 percent higher compared to the year before.  Returns to feeder cattle enterprises were higher than the year before but only the second highest for any year in the last five years.  Returns were higher due to higher prices received for market cattle.  Prices paid in 2021 for replacement cattle were 9 percent above the year before.  Cattle prices received were about $28 per hundredweight lower than prices paid for replacement cattle.  Returns above feed per cow increased $51 for beef cow enterprises due to higher prices received.  Returns were the second highest during the last five years.

The author would like to acknowledge that data used in this study comes from the Illinois Farm Business Farm Management (FBFM) Association. Without Illinois FBFM, information as comprehensive and accurate as this would not be available for educational purposes. FBFM, which consists of 5,000+ farmers and 70 professional field staff, is a not-for-profit organization available to all farm operators in Illinois. FBFM field staff provide on-farm counsel along with recordkeeping, farm financial management, business entity planning and income tax management. For more information, please contact our office located on the campus of the University of Illinois in the Department of Agricultural and Consumer Economics at 217-333-8346 or visit the FBFM website at www.fbfm.org.

A video representation of this and other 2021 results can be found on the farmdoc YouTube channel at https://go.illinois.edu/FBFM2021