Even with the projection of increased wheat production in some countries, the world harvest is expected to be a little smaller as a result of effects of the war in Ukraine. Global production for the marketing year 2022/2023 is estimated to be 771.64 million metric tons, down 7.4 million tons (-1%) from last year, according to the United States Department of Agriculture (USDA) projection. Canada, Russia, and Brazil expect to have larger harvests, while Ukraine, Australia, and Argentina are expected to be smaller. Soon after the beginning of the war, the expectation was that Argentina and Brazil, the primary wheat-producing nations in South America (see farmdoc daily April 8, 2022), could increase the planting of wheat. Brazil increased hectares while Argentina did not.

Meanwhile, Russia and Ukraine agreed to reopen Ukrainian Black Sea ports for grain exports on July 22, raising hopes that an international food crisis aggravated by the Russian invasion can be averted. On August 1st the first grain ship departed from Odessa port in Ukraine since the conflict started last February. However, Ukraine farmers and others have doubts about blockade on grain shipments easing. The two nations combined shipped over 50 million metric tons of wheat last year, according to data from the USDA.

Impacts of the Conflict 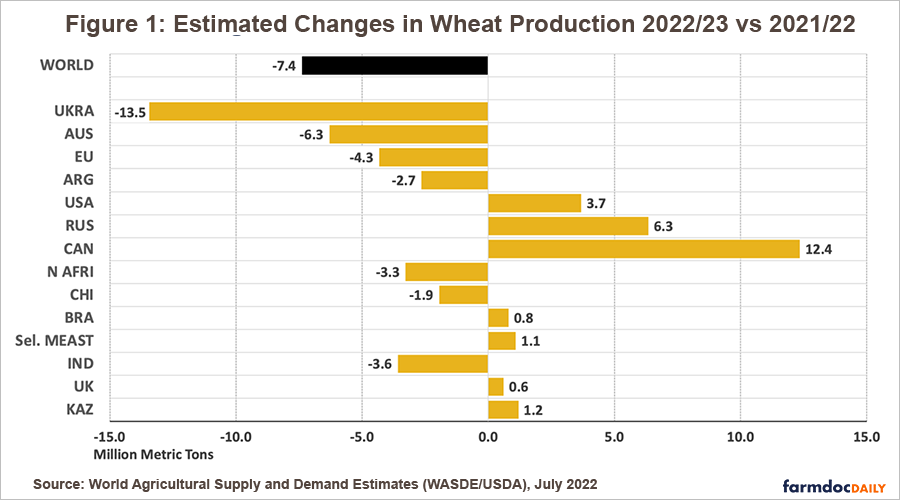 Uncertainty resulting from the Ukraine-Russia conflict created an opportunity for Canada to increase its role in global production. Canada had a 4% share of global wheat production before 2021. In 2021, Canada accounted for 7.7% of total global exports. USDA estimates for the next marketing year project Canada’s export share increasing to 12% of global volume. Canada’s wheat production for the marketing year 2022/23 stands at 34 million tons, up 12.4 million tons (57%) from last year (Figure 1). The harvested area is estimated at 10 million hectares, up 8% from last year.

Argentina is among the world’s primary wheat providers, accounting for 8% of the global exports in 2020/21 (USDA, July 2022). There was the expectation that Argentinian wheat could compensate for production losses from the war, but the first official estimates of the wheat planting area in Argentina show a decrease of 10% from last crop year. Private estimates (Bolsa de Rosario) are projecting an even greater decline, 15% in the planted area. 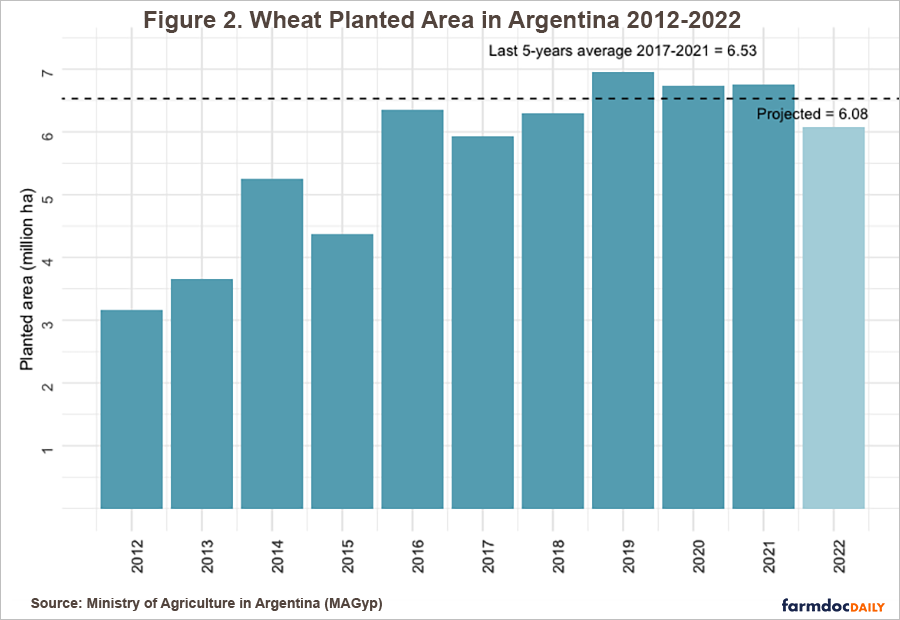 Argentina’s reduction likely occurs because of the third straight year of La Niña, which creates a very complex planting scenario. Additionally, more land has been planted with barley, the main alternative as a winter crop. Farmers chose to plant barley because they expect a lower degree of government intervention in barley markets. Finally, some farmers decided to plant first-season soybeans, instead of double-crop wheat/ soybeans, because of lower production costs.

A moderate drought in Argentina has impacted wheat production. Drought and low temperatures have delayed planting and crop progress. As of July 28, 95% of the planting had taken place, compared with 99% in previous years. According to the Bolsa de Cereales de Buenos Aires, approximately 25% of the wheat planting area is classified as “regular”. Therefore, yields so far are projected to be lower than trend yields for Argentina.

Recently, the Argentinian government announced a program (“Plan Argentina 25 MT”) for increasing wheat production to 25 million tons. This goal represents an increase of 13% from the record production and exports of the last harvest. Through the Ministry of Agriculture, the program offers agronomic advisory services to small farmers. Farmers’ associations have said that clear rules and an open export market are the keys to achieving the production goal.

In 2021 Argentina exported wheat to 46 countries. Latin America was the main destination; 77% of the total went to Latin America nations. Northeast Africa and Southeast Asia are the other buyers of Argentine wheat. Argentina’s wheat production has been significantly increasing over the last 10 years, with a record harvest in the previous crop year of 22.15 million tons (MAGyP 2022).

Largest Area in 30 Years in Brazil

As of July 24, almost 100% of Brazil’s wheat had been planted, covering almost 3 million hectares, an increase of 7% over last year, according to the National Supply Company, the country’s food supply and statistics agency (Figure 3). The two private consultancies Safras & Mercado and Cogo Intelligence in Agribusiness are projecting an even more significant increase in wheat planting, from 17% to 21%, respectively. This would be the largest planted area since 1990, the last year the government regulated the market. If the weather is favorable and average yields reach three tons per hectare (in 1990 wheat yields were one ton per hectare), Brazilian production will be close to a record of 10 million tons, up 18% from last year. Private consultancies are predicting a total production of more than 11 million tons. 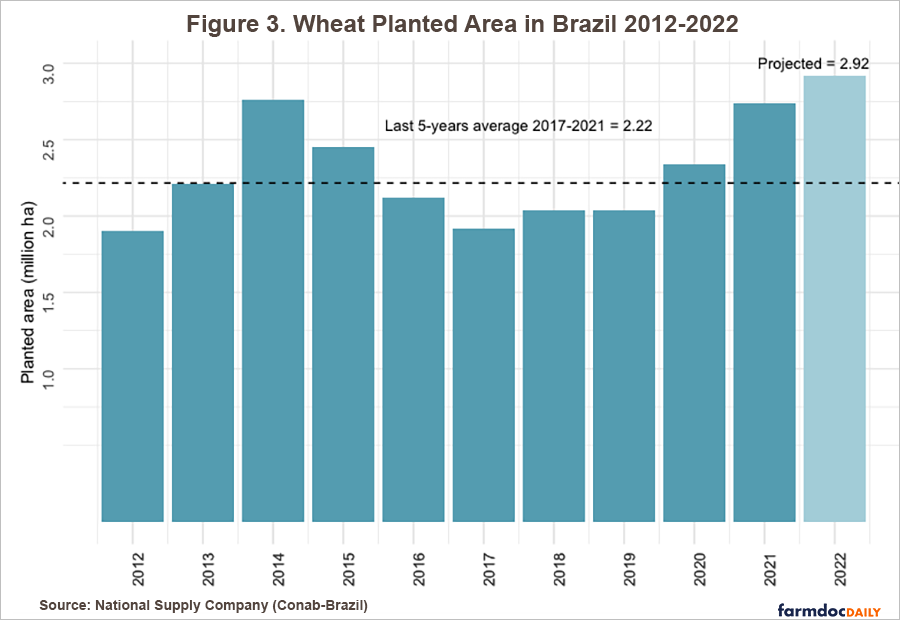 Brazilian producers increased planting because of the global supply disruption caused by the war in Ukraine. The war jolted commodity markets and caused a rise in the price of wheat, which undoubtedly was an incentive for increased wheat planting in Brazil. Even though Chicago wheat futures eased to $8 per bushel with the progress of new plantings, values remain elevated compared to historical trends. In the Brazilian domestic market, prices remain higher than the five-year average because of the depreciation of the Brazilian real relative to the U.S. dollar.

So far, the crops are in good condition in the southern states of Parana and Rio Grande do Sul, which account for almost 90% of the wheat production in Brazil. La Niña years are typically favorable for wheat yields. Wheat is planted in the South of Brazil during winter and in double-crop with soybeans in the summer. Harvest takes place between September and November.

Worldwide wheat production likely will be only slightly smaller in the marketing year 2022/2023 as a result of the war in Ukraine. Countries such as Canada, Russia, and Brazil are expected to increase their plantings, while Ukraine, Australia, and Argentina are expecting smaller harvests. South American wheat could contribute to the compensation for production losses from the war. The planted area in Argentina has decreased 10% from last crop year because of weather issues. On the plus side, Brazil is expected to have its largest planted area since 1990.

Colussi, J., G. Schnitkey and S. Cabrini. "Argentina and Brazil Could Expand Wheat Production Due to the War in Ukraine." farmdoc daily (12):48, Department of Agricultural and Consumer Economics, University of Illinois at Urbana-Champaign, April 8, 2022.