In April 1933, Senator George W. Norris (R-NE) argued that Congress should include a cost of production calculation in farm support policy.  His efforts were part of the debate for authorizing emergency policies in response to the Great Depression and part of President Roosevelt’s New Deal.  Nine decades later, high input costs due in part to Russia’s unprovoked war against Ukraine have reinvigorated arguments in Congress for adding a cost-of-production component to farm support programs.  The current concept is ‘margin protection’ or payments based on crop margins (see e.g., Committee on Agriculture, June 9, 2022;  Abbott, June 10, 2022; Fatka, June 10, 2022).  With an eye on the expected reauthorization debate in 2023, this article begins a multi-part examination of cost-of-production and margin calculations in farm payment programs (see also, farmdoc daily, September 6, 2022).

Returning to the floor of the United States Senate in 1933, the fight that Senator Norris led was to include a cost-of-production option to trigger farm supports.  Congress was debating the legislation that would become the Agricultural Adjustment Act of 1933.  The preferred policy at the time was based on a concept of equity for farmers in the economy and would come to be known as parity; it used a ratio of costs and prices as compared to costs and prices at a fixed point in time (1909 to 1914).  Among those opposed to the cost-of-production policy option was Secretary of Agriculture Henry Wallace who wrote a letter to Senators that was read into the record of the debate.  Secretary Wallace informed Senators that he was “afraid of the term ‘cost of production’ . . . [i]t is too elusive: there are too many kinds of cost of production” (Congressional Record, April 12, 1933, at 1548-52; see also, Perkins 1969; Coppess 2018).  Southern Senators provided the strongest opposition to the Norris proposal and argued that the cost of production policy was insufficient because farmers needed more than covering costs to survive.  They were also concerned that it could decrease support levels when costs decreased.  Senator Norris was unsuccessful, but he fought from the committee room to the Senate floor to the Oval Office of President Roosevelt.  Passage of the Act was nearly derailed by this basic policy dispute.

If Congress reauthorizes the farm bill in 2023 it will mark ninety years since that first foray into federal policy for directly supporting America’s farmers during the Great Depression.  Much has changed in the intervening decades, but the debate has consistently involved disagreements over fixed support mechanisms or those that adjust with changing circumstances.  The quest for including some version of cost-of-production in the policy tends to arise when the costs of farm inputs such as seeds, fertilizers, chemicals and fuel are increasing and squeeze farm incomes; the inflation and stagflation era of the 1970s provides a prominent example.  Early discussions have raised the concept of crop margin to incorporate the cost-of-production in program payments.  Margin has yet to be clearly defined or explained but would be expected to incorporate the difference between crop prices or revenue and some calculation of the costs of producing the crop.

Much depends on how margin is defined.  If program payments are calculated using costs of production, the first questions involve which costs to include, followed by how to incorporate costs for a national program with substantial variations among crops, farmers and across regions.  For the sake of reference, USDA reports data for costs back to 1975 for the major program crops through the Economic Research Service (ERS).  USDA reports costs in two categories: (1) operating (or variable) costs; and (2) costs for allocated overhead.  For historical perspective and for the discussion that follows, the ERS data for the years 1975 through 1985 are illustrated in Figures 1a through 1c for corn, wheat and cotton, respectively; the gross value of production (without government payments) is also included.  This represents the last era of high inflation. 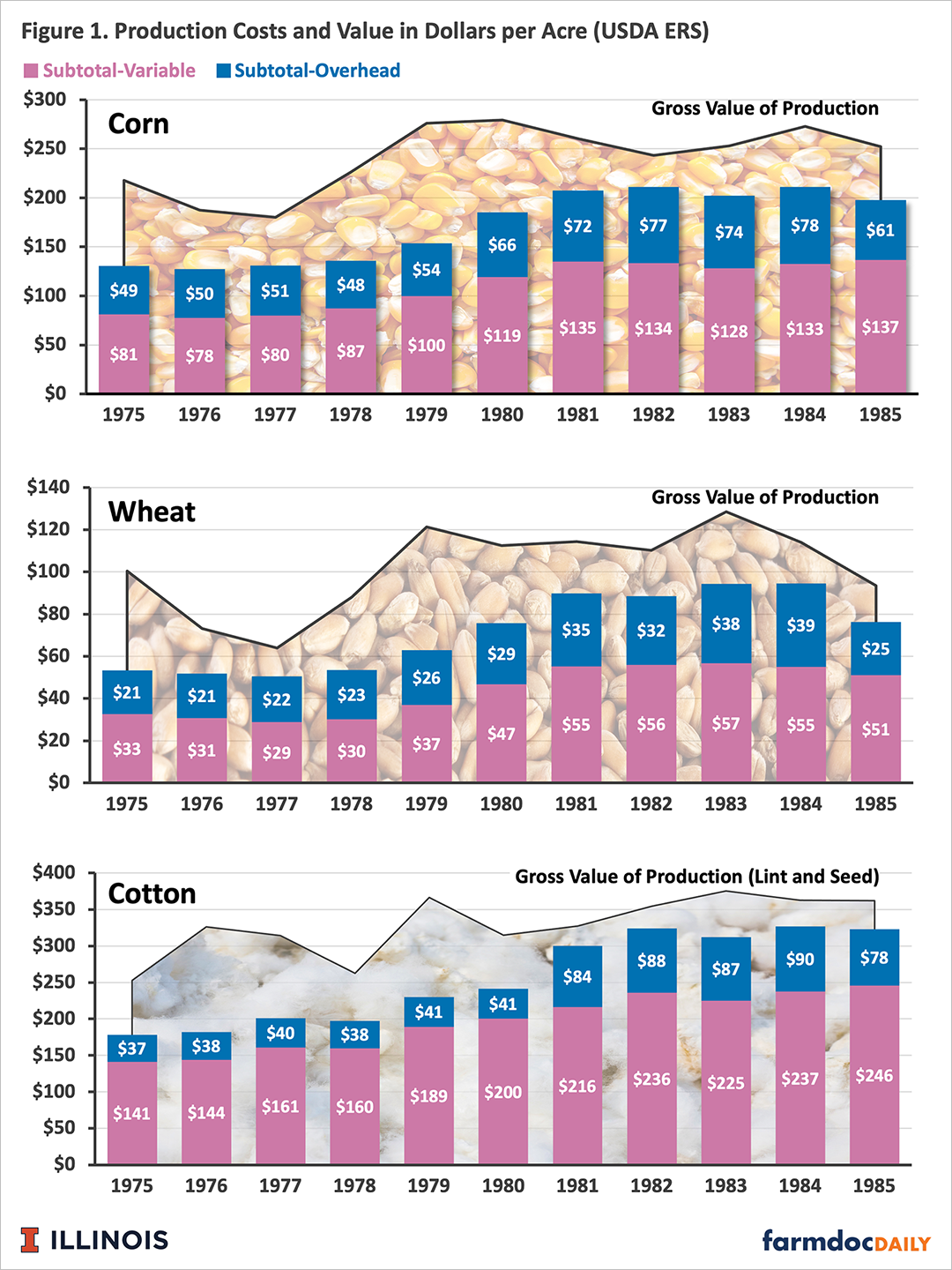 The challenging economic times of the 1970s and 1980s were the most prominent, recent and relevant era in which Congress used costs of production to adjust target prices.  Figure 2 provides an overview of inflation over time, as reported by the Minneapolis Fed (Minneapolis Fed, Consumer Price Index 1913-).  Inflation during the years 1972 through 1984 are highlighted as they align with the farm program provisions discussed herein.  The inflation rate for 2022 is noted as an estimate based on changes from first quarter 2021 to first quarter 2022. 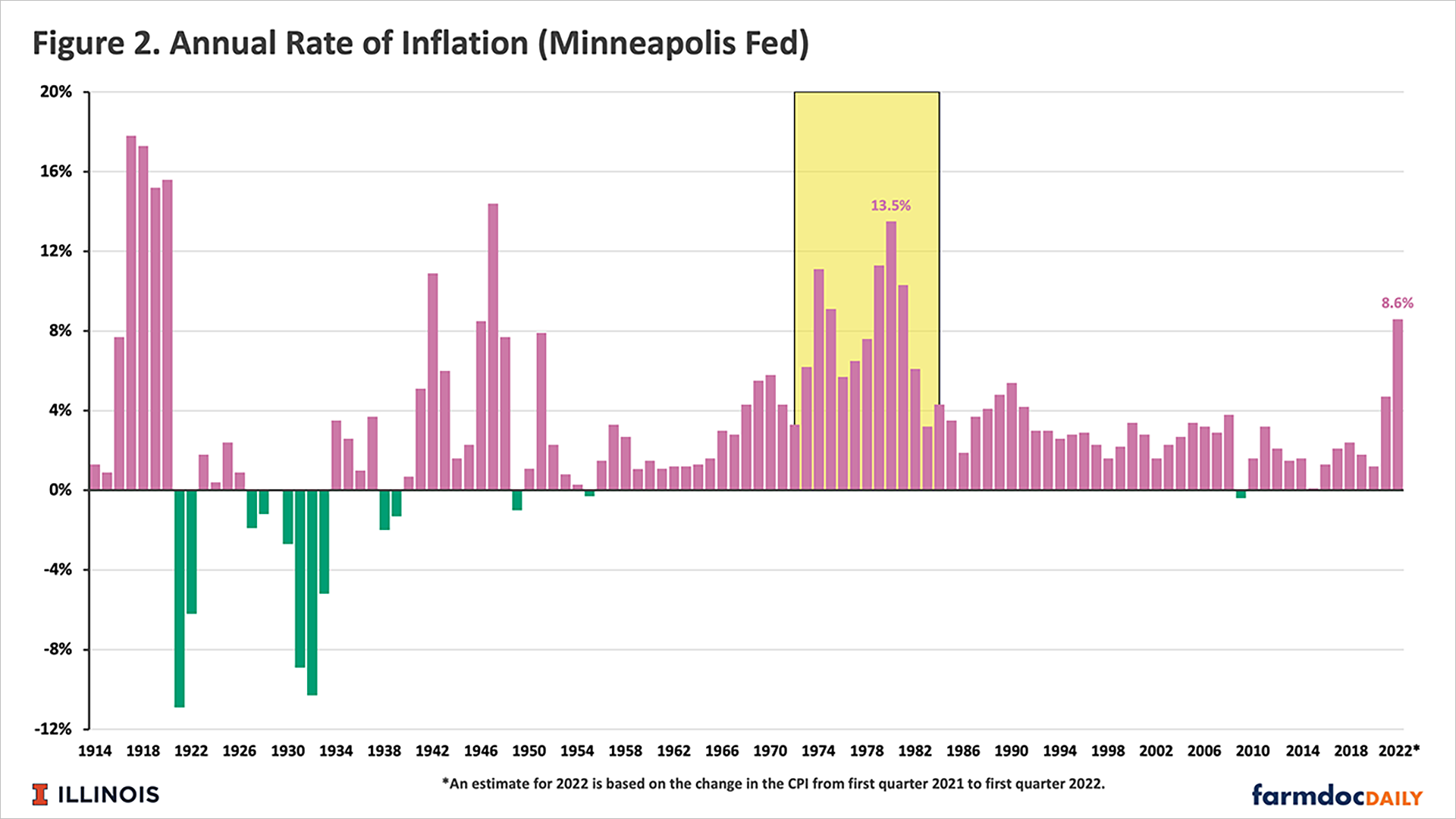 The Agriculture and Consumer Protection Act of 1973 marked a critical development in the history of farm policy.  At a time when crop prices were spiking, as well as costs, Congress effectively replaced the failed parity policy system of the previous forty years with production incentive policy that used target or established prices to trigger deficiency payments whenever market prices were lower than the target price.  (see e.g., Coppess 2018; farmdoc daily, March 16, 2017; July 6, 2022).  Figure 3 illustrates the monthly average price received by farmers for corn, wheat and cotton during the years 1970 to 1985, which are relevant to the farm program payments discussed herein. 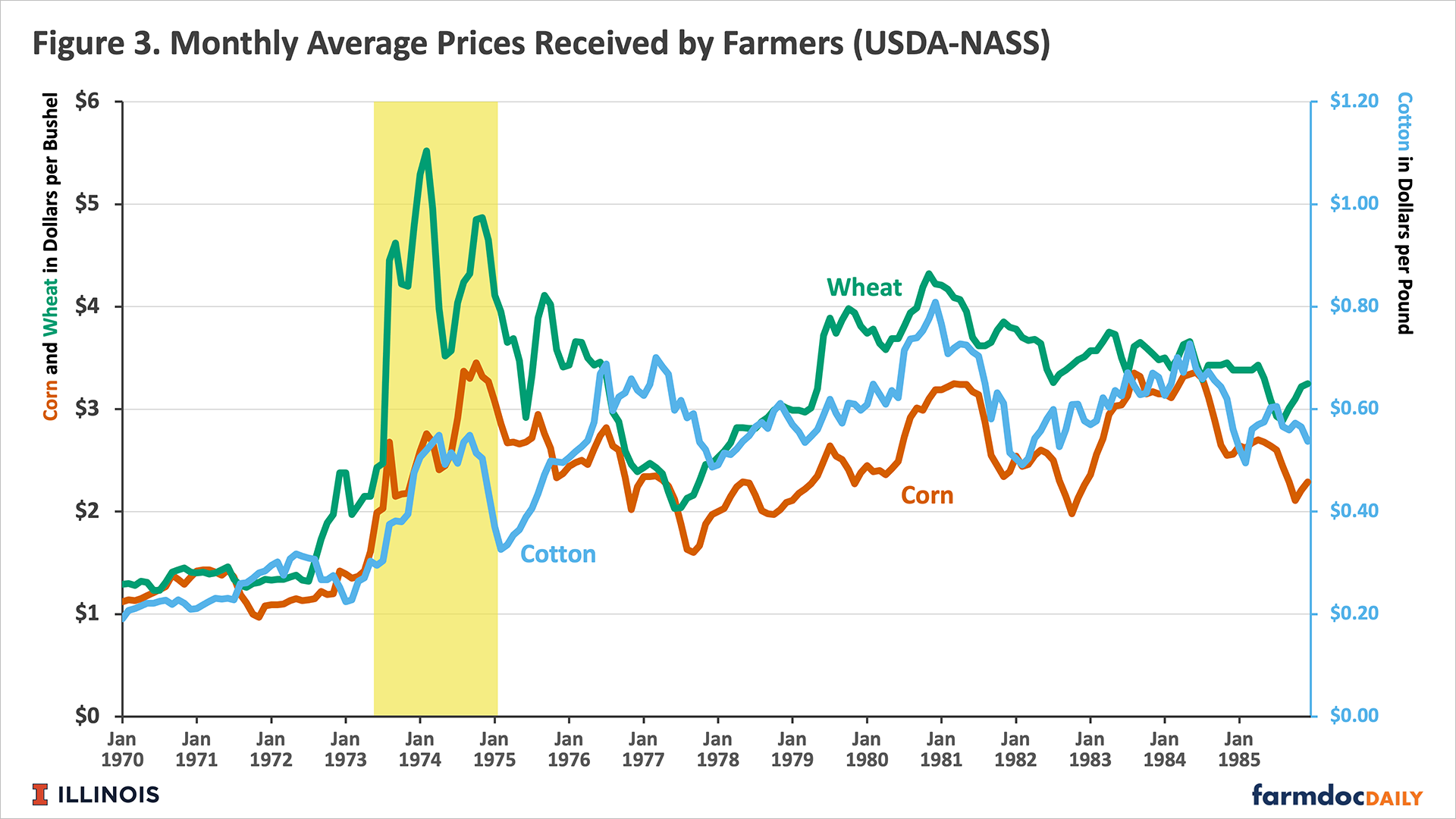 Figure 4a summarizes the 1973 Farm Bill’s target prices and adjustments for corn, wheat and cotton.  Congress designed the adjustment around any changes during the previous calendar year of the index of costs for production items, interest, taxes and wage rates.  Figure 4b illustrates the changes in variable costs and overhead in 1976 as compared to 1975 for corn, cotton and wheat.  These would not have been the actual costs used to adjust the target prices, which would have been based on changes within the calendar year.  Figure 4c illustrates the target prices for corn, wheat and cotton as adjusted and reported by USDA (Green, March 1990).

The Food and Agriculture Act of 1977 revised the target price adjustment calculations.  USDA was to use variable costs, machinery ownership costs and general farm overhead, and the adjustment calculation used two-year averages with target prices adjusted to reflect changes from crop year to crop year.  Figure 5a summarizes the 1977 Farm Bill adjustment which was revised to use a comparison of the two-year average costs, including variable, machinery and general overhead costs.  Figure 5b compares the changes in the two-year moving averages for corn, cotton and wheat in the years 1978 through 1981 to demonstrate the adjustment issue and not the actual adjustments calculated by USDA.  Figure 5c illustrates the adjusted target prices as reported by USDA.

The Agriculture and Food Act of 1981 was the last farm bill to include an adjustment to the target or established prices based upon changes in costs of production.  As written by Congress, the established or target price was not less than a fixed amount and adjustments should have only increased that price trigger.  The adjustment was based on changes in the two-year average costs, which may include variable costs, machinery ownership costs and general farm overhead.  Figure 6a summarizes the 1981 Farm Bill provisions.  Figure 6b compares the changes in the two-year moving averages for corn, cotton and wheat in the years 1982 through 1985 to demonstrate the adjustment issue and not the actual adjustments calculated by USDA.  Figure 6c illustrates the adjusted target prices as reported by USDA.  Note that USDA reported reduced target prices in 1985 as the Food Security Act of 1985 froze target prices; the wheat target price in 1984 was reported ($4.38 per bushel) as reduced from the statutory provision ($4.45 per bushel) for that year.

For each of the 1973, 1977 and 1981 farm bills, payments to farmers were triggered based on a deficiency between the target (or established) price and a price that was the higher of either the average prices for the first five months of the crop’s marketing year or the crop’s loan rate.  Figure 7 compares the target prices as adjusted and reported by USDA with the prices received during the first five months of each crop’s marketing year (or the loan rate if it was higher).  It demonstrates the programs in action but may not be the actual deficiencies used to determine payments because of various adjustments or other provisions (e.g., advanced payments and set aside provisions).  Where the solid line fell below the dashed line, payments are expected to have been triggered. 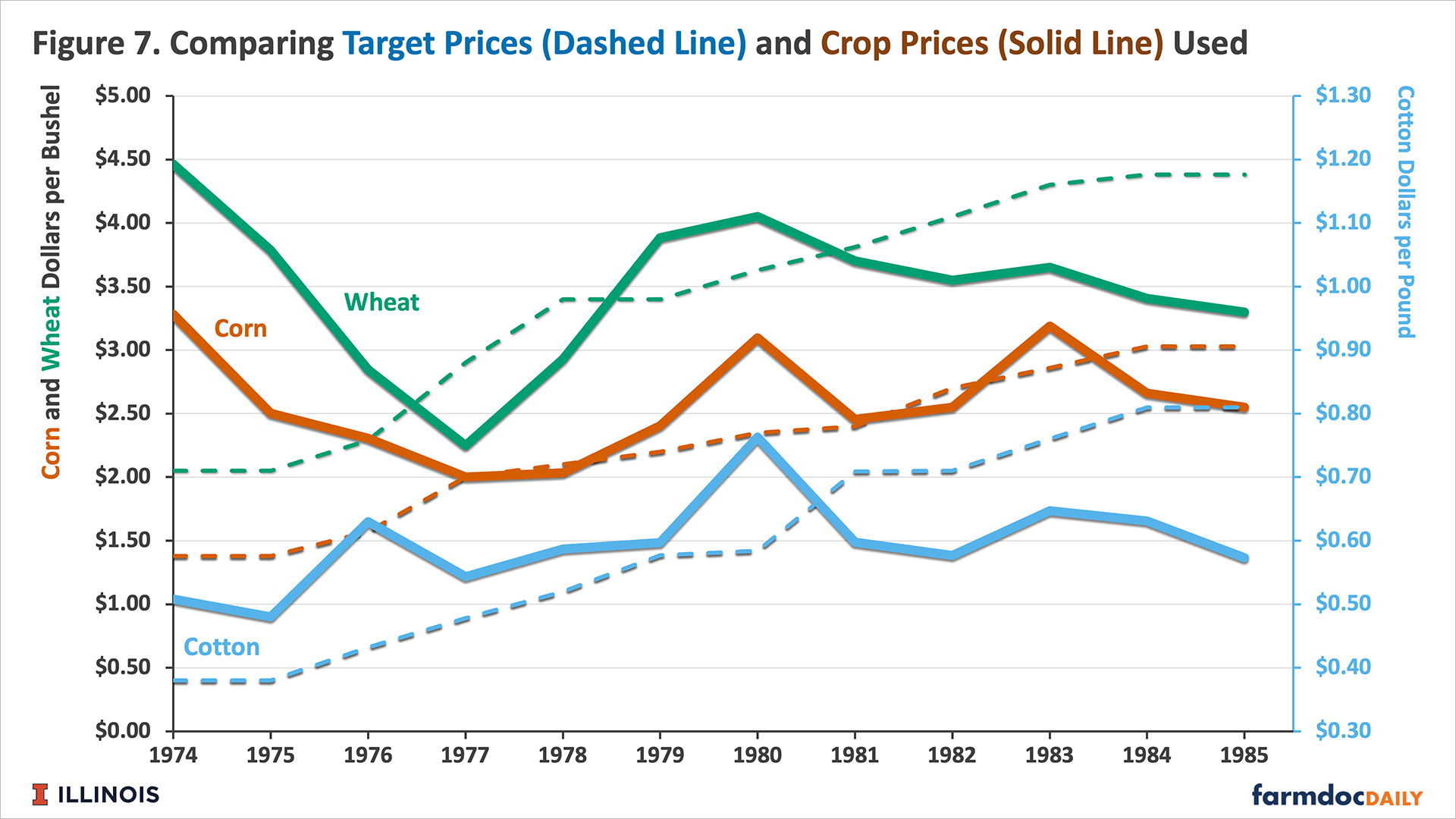 The concept for using costs of production has a long history in farm policy debates.  In the past, U.S. farm policy has sought to be responsive to changes in the cost of production when production costs are changing a lot in nominal terms.  This article explores how that played out in the 1973, 1977 and 1981 Farm Bills.  In each of those three farm bills, Congress revised calculations for adjusting the price-based payment triggers using changes in some of the costs of production for the program crops.  This historical overview in the last major era of inflation provides much food for thought and raises many questions for further evaluation.  If the farm bill’s 90th anniversary features a reauthorization debate over including costs of production or crop margins, the historical experiences may be informative and relevant.  They are reviewed here to initiate the discussion.  Future articles will delve deeper into the various issues and questions about this potential policy design and its many alternatives.

Coppess, Jonathan. The Fault Lines of Farm Policy: A Legislative and Political History of the Farm Bill (Lincoln: University of Nebraska Press, 2018).