On Tuesday, November 8, 2022, Americans will vote in the Congressional mid-term elections for all districts in the House of Representatives and for roughly one-third of the Senate seats; the winners will be seated for the 118th Congress of the United States.  According to polling, roughly three-quarters or more of Americans disapprove of Congress, a disapproval that has remained consistent for much of the last fifty years (Gallup, Congress and the Public; Ballotpedia).  In the U.S. Constitution, Congress is the first branch of the federal government, designed in Article I and vested with all legislative powers (U.S. Constitution, National Archives).  Considering Congress, however, is not an easy undertaking.  The legislative branch is complicated and complex.  The legislative powers exist at the very core of our system of self-government.  With such matters and more in mind, this article initiates an exploration of Congress, the legislative power, and policymaking in the American system of self-government.

We are a nation of almost 332 million people (U.S. Census, July 1, 2021).  The United States population has grown nearly 270 percent in 100 years, compared to the total population of 123 million in the 1920 Census (U.S. Census, Historical Population Change Data).  Figure 1 illustrates the total resident population for each census from 1920 to 2020, highlighting the growth from each previous census. 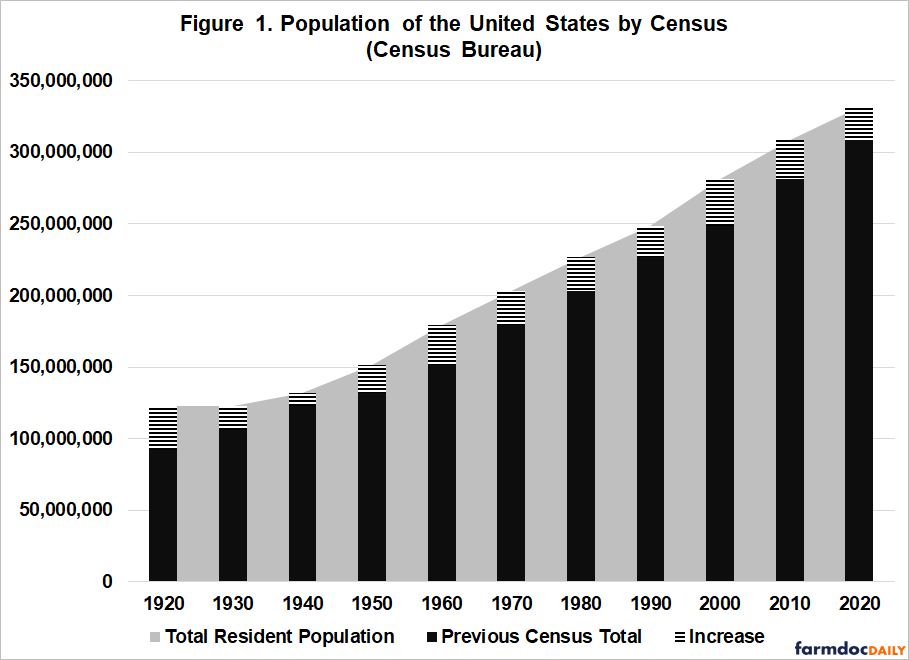 We occupy over 3.8 million square miles of land area, which we have politically divided into 50 states (Census, 2010; The World Bank).  The U.S. Constitution requires the decennial census and an apportionment of Representatives in the House based upon the “whole number” of persons, which is implemented in federal statute (U.S. Const., Art. I, Sec. 2; 2 U.S.C. §2a).  The population count used for apportioning Congressional districts is 331,108,434 based on the 2020 Census (U.S. Census, April 26, 2021).  Figure 2 illustrates the apportionment population by State from the largest (California) to the smallest (Wyoming) and Figure 3 maps population by State. 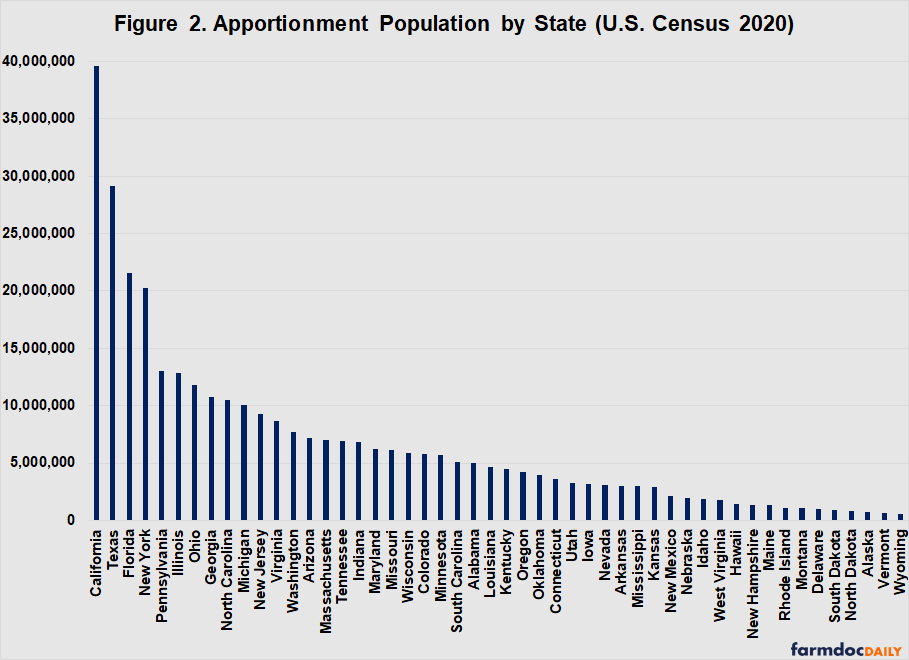 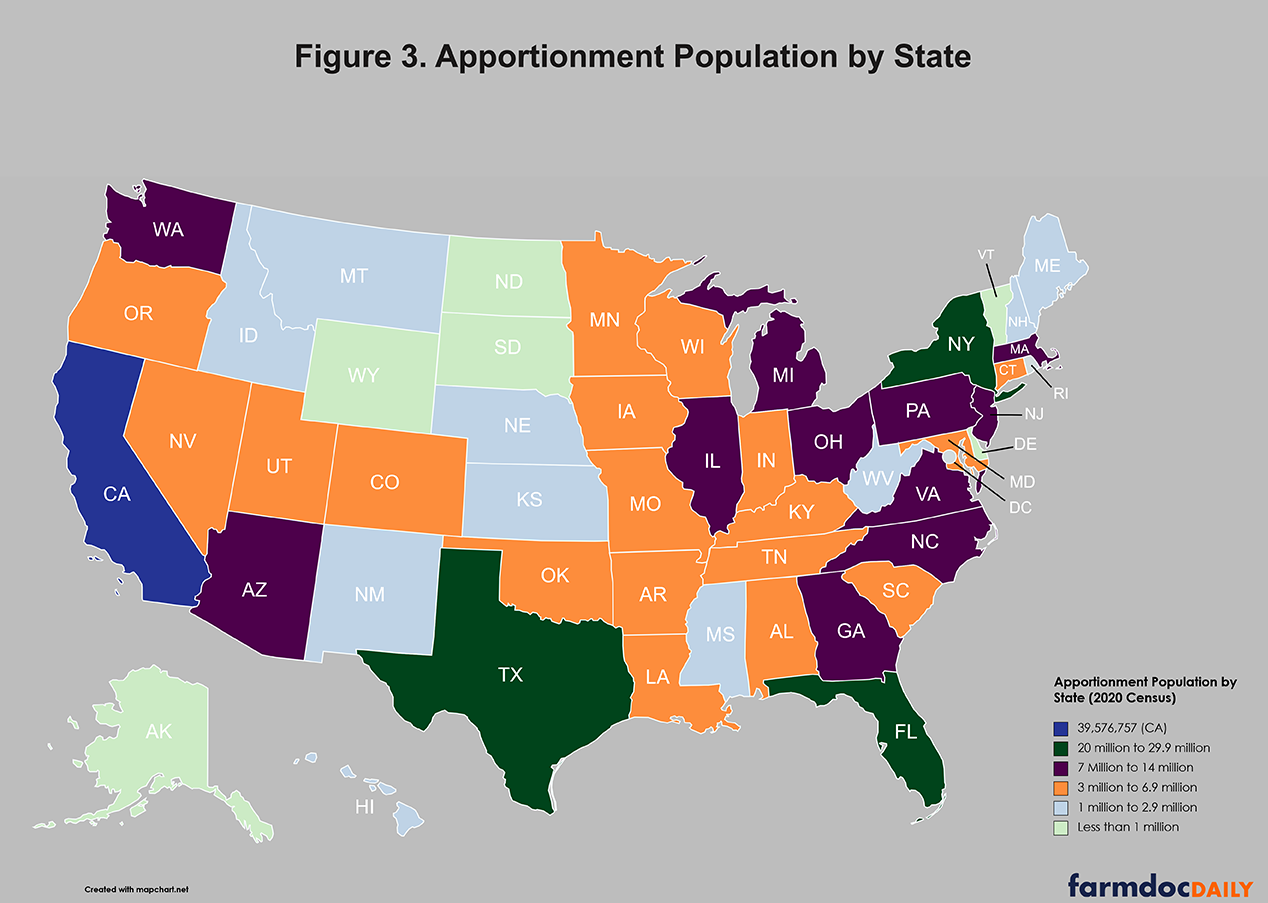 As we should all know from government classes, Congress is divided into two chambers, the House of Representatives and the Senate.  The two chambers were designed to achieve different versions of representation (districts vs. states) and have different term lengths (2 years in the House vs. 6 years for Senators).  A future article will delve deeper into this design and the theoretical understandings it sought to implement.

(1) The House of Representatives

There are currently 435 Members of Congress apportioned amongst the population (331,108,434) of the 50 States.  The House of Representatives has been locked in size at 435 Members since the Permanent Reapportionment Act of 1929.  The number of Representatives, however, actually dates to 1911 when the U.S. population was just 92 million persons (see, Kromkowski and Kromkowski 1991). 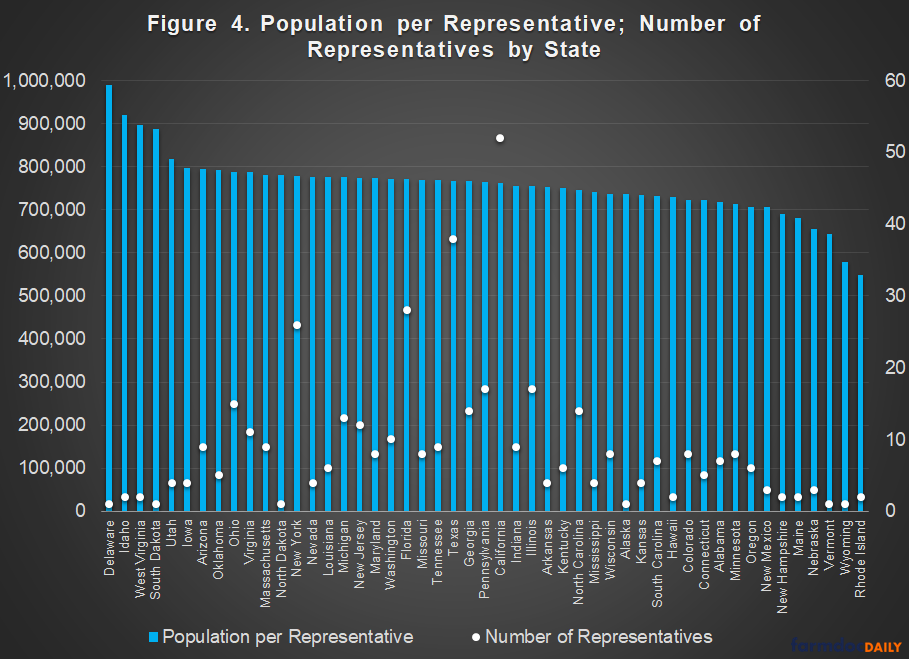 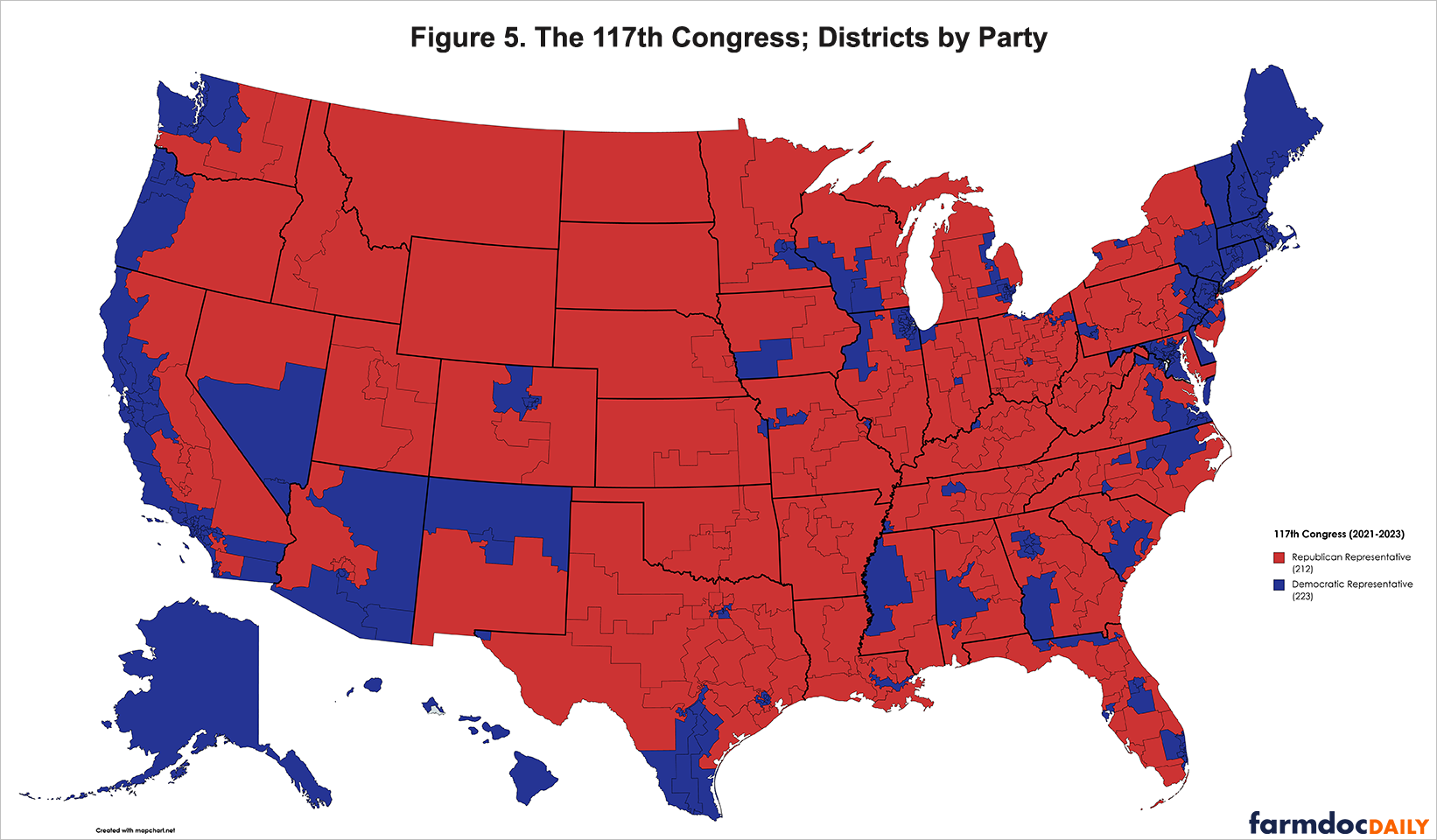 In the 117th Congress (2021 to 2023), Democrats currently hold a slim majority with 221 Representatives in their caucus while Republicans have 212 Representatives in their caucus (there are currently two vacancies).  All Representatives and districts will be voted on in the upcoming midterm elections.  For those interested in the history of House election results, the University of Richmond’s Digital Scholarship Lab has mapped all House elections from 1840 to 2018 (Digital Scholarship Lab; see also, History of the House).  Figure 6 is a screenshot of the map from the 1928 elections, which produced the 71st Congress that enacted the Permanent Reapportionment Act of 1929 (Electing the House of Representatives). 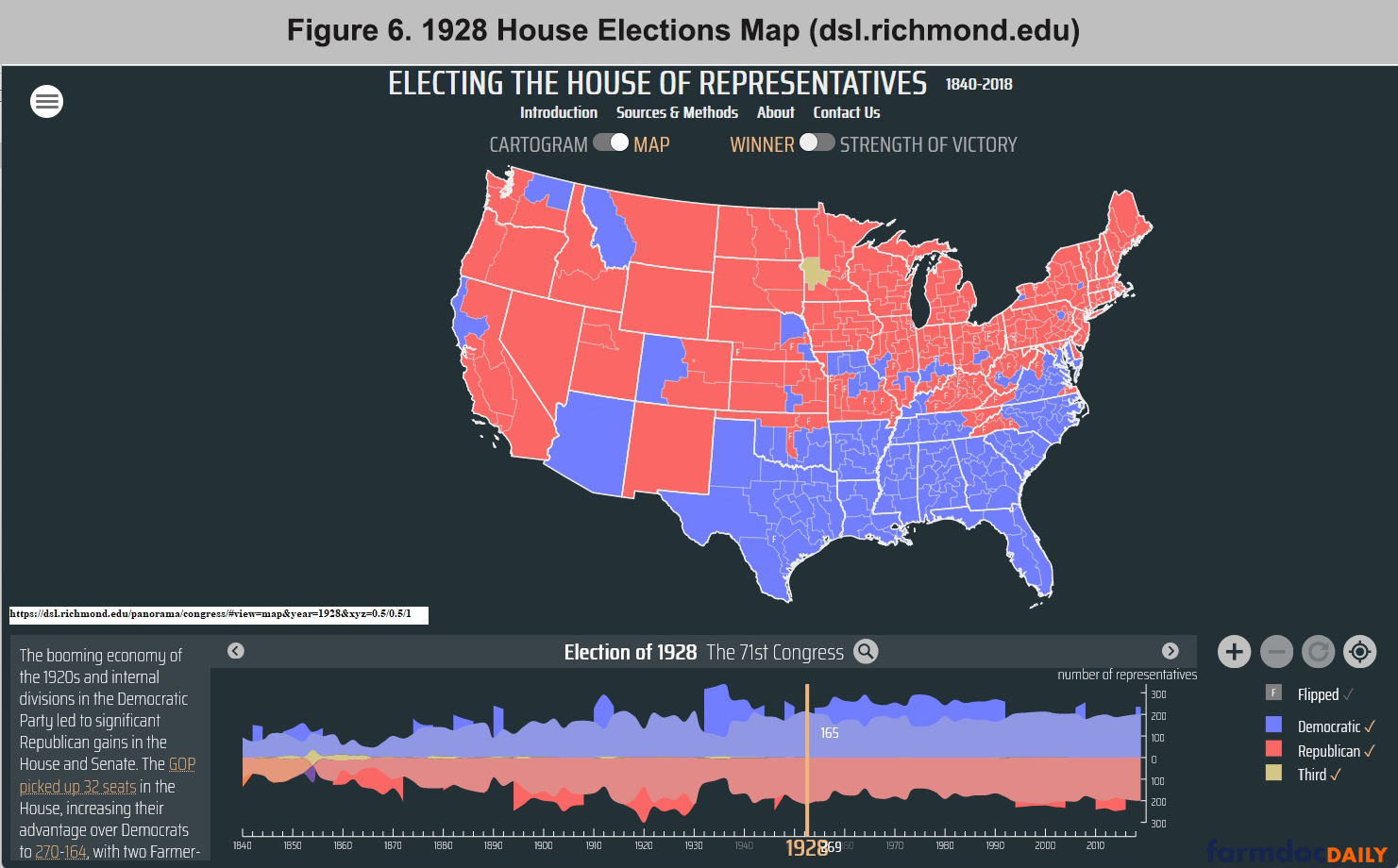 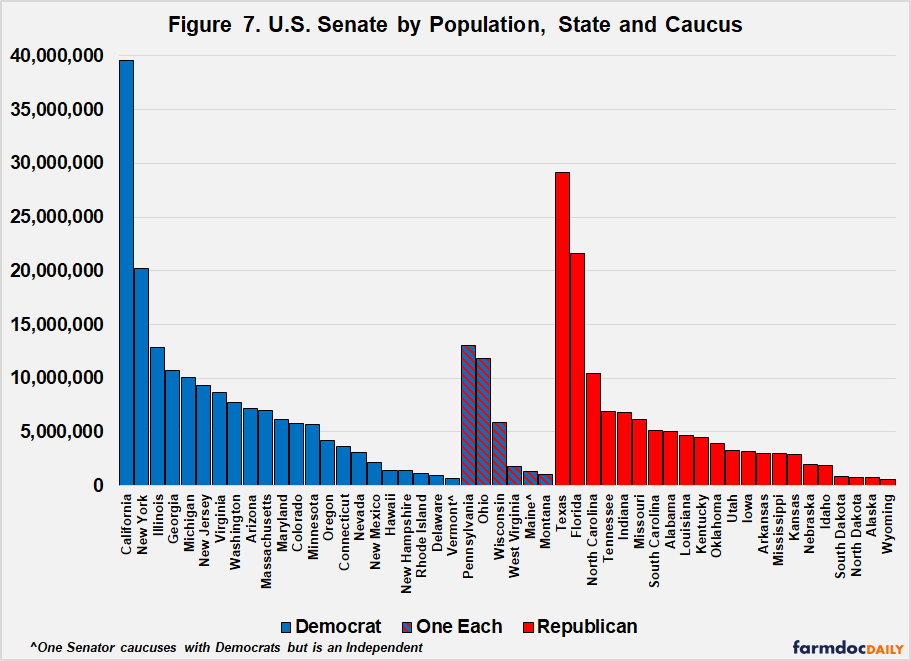 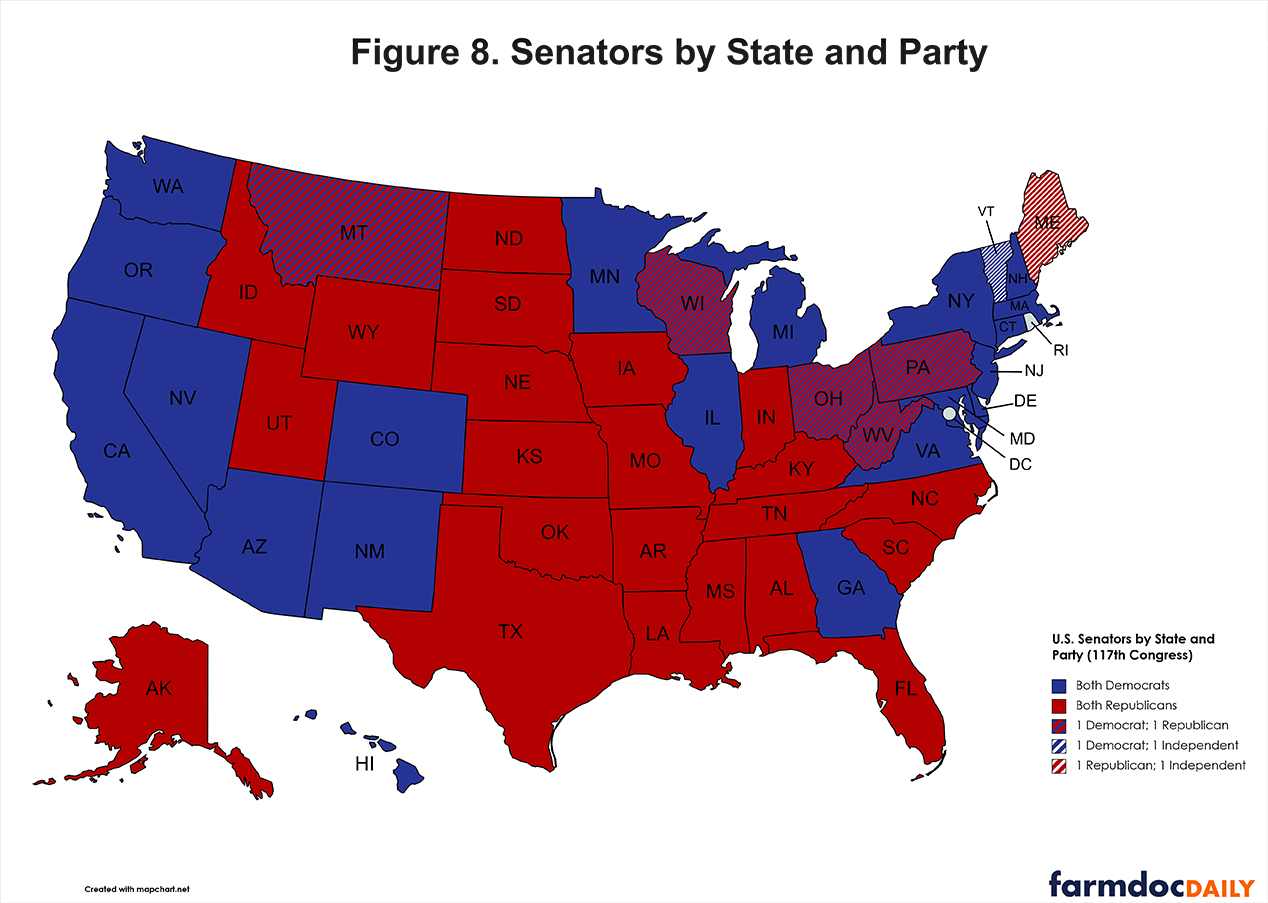 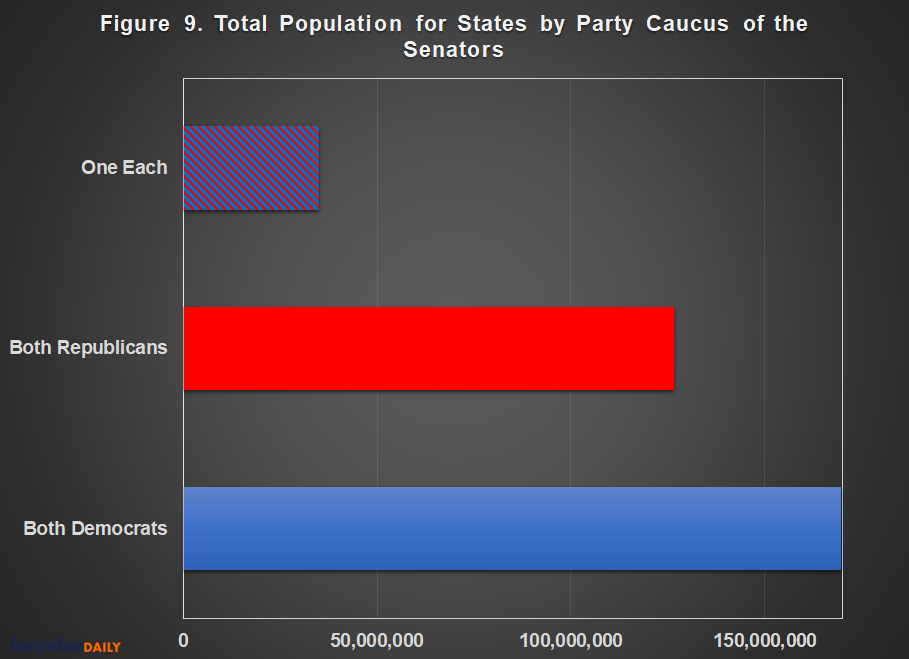 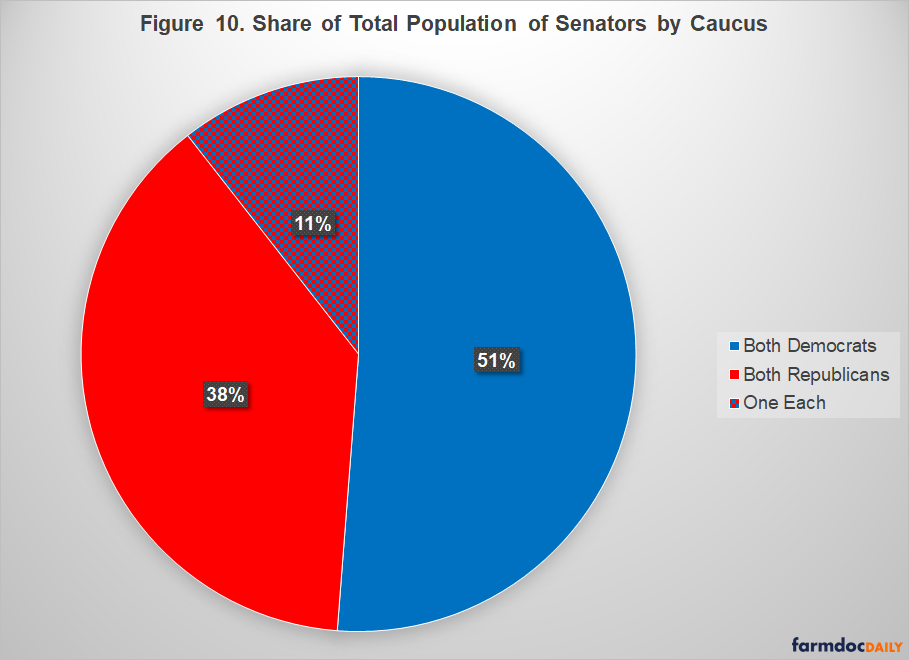 The United States has a relatively unique system of self-government with the powers of the federal government divided into three equal branches (Nourse, 1996).  The most direct representation of the governed is in the U.S. Congress to which the Constitution has vested all legislative powers; the legislative powers can be defined as the power to initiate the making of law.  The Framers of the Constitution divided Congress into two chambers, the House of Representatives and the Senate.  There are 435 Representatives in the House and the seats in that chamber are elected every two years.  The midterm election on November 8, 2022, will be for all 435 seats in the House.  Each State has two Senators and generally one-third of the Senate is up for election in any election cycle, including the upcoming midterm when 35 seats are being contested.  The design and operation of Congress will be the focus of this series of articles, initiated by this very basic introduction to the Article I branch of the United States Government.

Nourse, Victoria. “Toward a Due Foundation for the Separation of Powers: The Federalist Papers as Political Narrative.” Tex. L. Rev. 74 (1996): 447.