On Monday, October 3, 2022, the Supreme Court began its new term by hearing oral arguments over the Clean Water Act’s troubled definition of navigable waters in the case, Sackett v. Environmental Protection Agency (Docket No. 21-454; Gerstein, October 3, 2022).  The case represents yet another attempt by the Supreme Court to interpret the Clean Water Act in a dispute involving wetlands.  This article adds to previous reviews of the issues involved by exploring a perspective from the work of Congress in enacting the Clean Water Act (see e.g., farmdoc daily, April 3, 2019; March 21, 2019; April 6, 2017; February 9, 2017; March 24, 2016).

The facts of the case do not appear to be in dispute.  In 2004, Michael and Chantell Sackett, who operate a commercial construction and excavation business, purchased a vacant lot (0.63 acres) in a residential subdivision of Priest Lake, a 23,000-acre lake in northern Idaho (Priest Lake).  Roads form the northern and southern boundary of the property and across the northern road is the Kalispell Bay Fen, a large wetlands area that eventually drains into Priest Lake.  Across the road to the south are lakefront houses and the Sacketts’ property sits 300 feet from the lake.  In 1996, the Army Corps of Engineers (the Corps) had determined that the property contained wetlands that were subject to Clean Water Act jurisdiction and informed the owner of the property.  In 2007, the Sackets began to fill the wetlands to prepare the lot for construction without a permit.  Soon thereafter, the Environmental Protection Agency (EPA) and the Corps inspected the site and informed the Sacketts that it was a wetlands subject to Clean Water Act jurisdiction (see e.g., Sackett Petition; EPA Brief; Sackett Brief; see also, King and Northey, September 16, 2022).  Figure 1 is a screenshot of the area from Google maps, the approximate location of the Sacketts’ property is highlighted by the arrow; Kalispell Road appears to cut through the wetlands, with most of the wetlands north of the road. 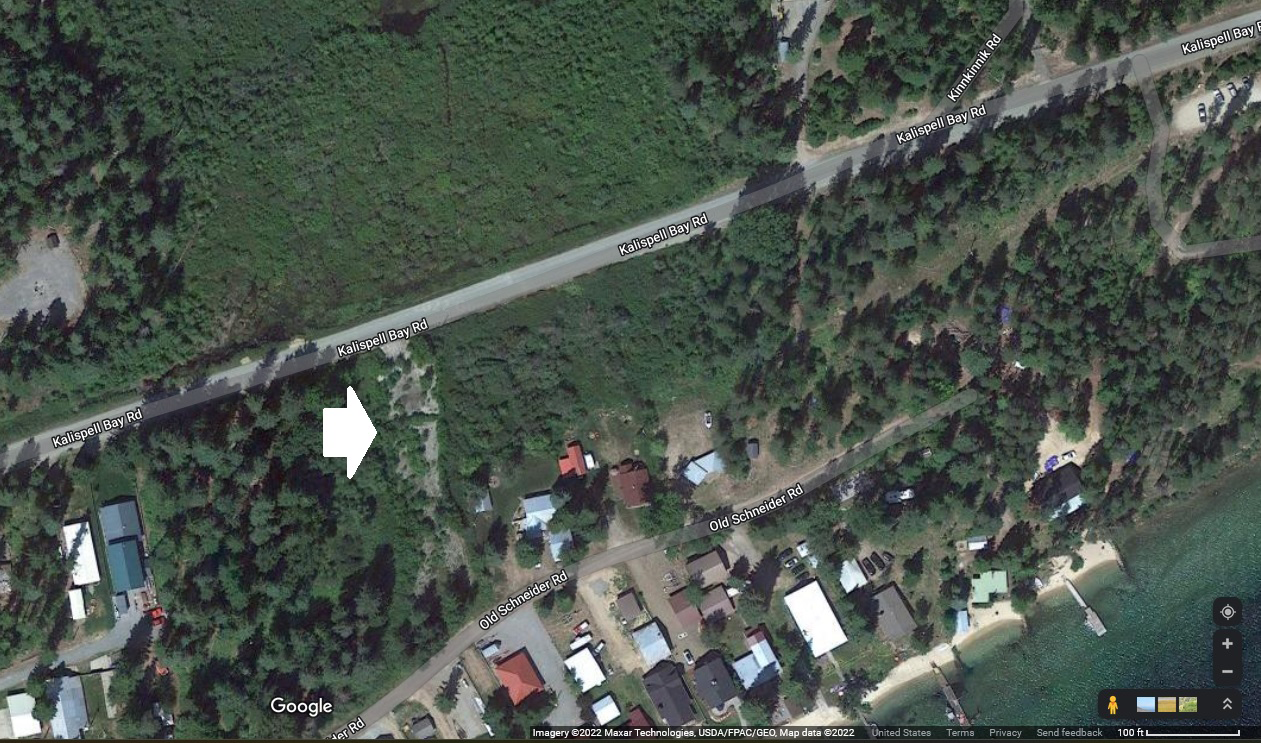 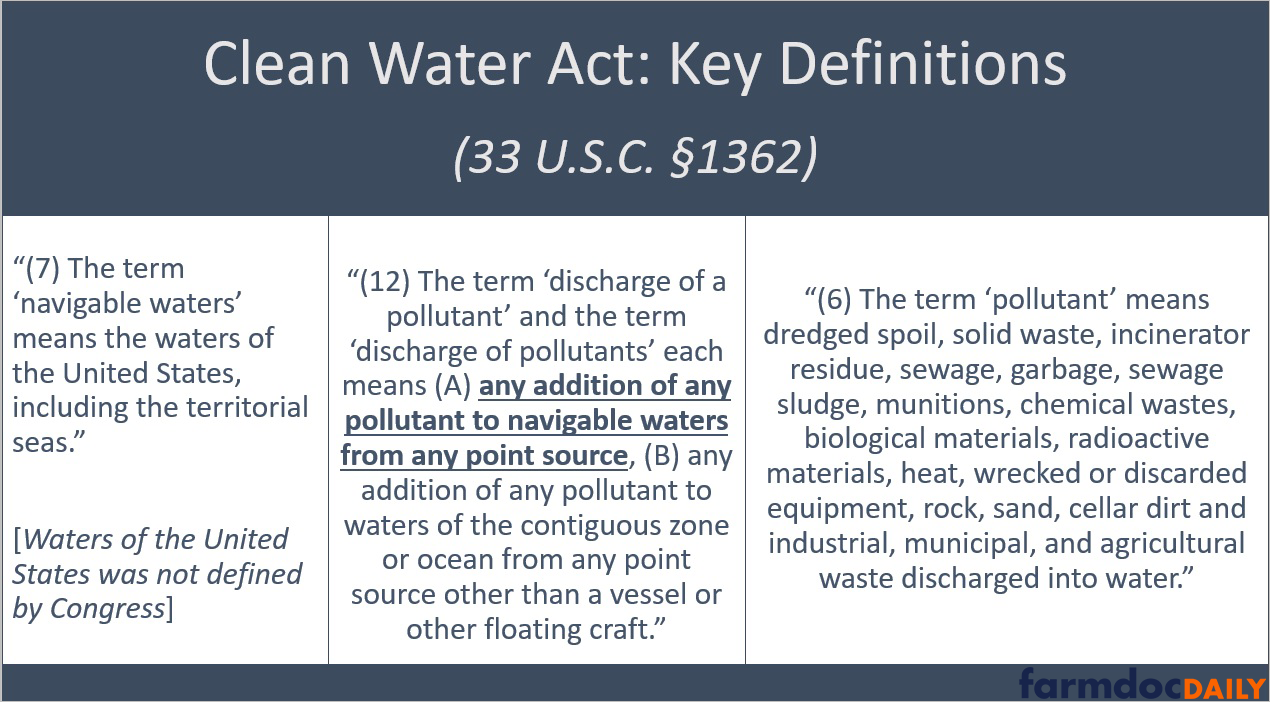 The Clean Water Act was technically the Federal Water Pollution Control Act Amendments of 1972 (P.L. 92-500); Congress was amending an existing statute—with existing terminologies and authorizations—rather than writing on a blank statutory slate.  Both the Senate Public Works Committee and the House Public Works Committee provided historical background as part of the explanation for their legislative efforts.  Clear in both explanations was frustration with previous attempts to deal with water pollution.  The House Public Works Committee had been “trying to bring to reality an effective properly funded program to restore and enhance the quality of our waters and to insure their future as a lasting national asset” since the committee had been created in 1946 (H. Rept. 92-911, at 66).  From the Senate Public Works Committee’s “two-year study of the Federal water pollution control program, the Committee conclude[d] that the national effort to abate and control water pollution has been inadequate in every vital aspect” (S. Rept. 92-414, at 7).

Regulating water pollution largely originated with the Water Pollution Control Act enacted in 1948 (P.L. 80-845) but can be traced to the Refuse Act of 1899 (P.L. 55-425, Sec. 13).  Congress amended the 1948 Act in 1956; further amendments in 1965 (P.L. 89-234) required each State to develop standards to improve water quality within its boundaries.  Again in 1966, Congress amended the statute (P.L. 89-753), followed by the Water Quality Act of 1970 (P.L. 91-224).  Both Committees reported multiple hearings and investigatory work over the two years prior to 1972; the House committee specifically listed a seven-month effort in which it “held 38 days of hearings, listened to 294 witnesses, and received 135 additional statements for the record” producing a record that “required 4,155 printed pages” (see, H. Rept. 92-911, at 66-69; S. Rept. 92-414, at 7).  The Clean Water Act of 1972 was the subject of extensive legislative work that built upon multiple previous enactments and resulted from frustration with the effectiveness of those efforts to control water pollution.

Congress used the term “navigable waters” from the start and explained its reasons.  What became the Clean Water Act began in the Senate as S.2770, reported by the Public Works Committee on October 28, 1971.  The committee reported that the 1965 Act required States to “develop standards for water quality” within the State’s boundaries but applied only to “interstate navigable waters flowing through the State; intrastate waters were not included” (S. Rept. 92-414, at 2).  Unsatisfied with the 1965 Act system, the committee turned to the federal permitting system from the 1899 Refuse Act, which the Nixon Administration had also tried to use in 1970 for the same purpose (S. Rept. 92-414, at 8).  It was an acknowledged shift in policy direction and design, “from a water quality standards control mechanism to a discharge control mechanism,” with the purpose “to restore and maintain the natural, chemical, physical, and biological integrity of the Nation’s waters” by eliminating all pollutant discharges by 1985 (S. Rept. 92-414, at 11).

The 1899 Refuse Act, therefore, provided the direct Federal regulatory authority for prohibiting water pollution, or discharges of pollutants, which existed independently of the State-based 1965 Act program the committee had concluded was inadequate (Id., at 71 (the “Federal Government as the custodian of the navigable waters has the responsibility to control affirmatively any discharges of pollutants into the navigable waters”)).  In other words, the term navigable waters from the 1899 Refuse Act was the jurisdictional hook for federal regulation of water pollution, not a definition of which waters were to be regulated.  The Committee made clear that “[w]ater moves in hydrologic cycles and it is essential that discharge of pollutants be controlled at the source. Therefore, reference to the control requirements must be made to the navigable waters, portions thereof, and their tributaries” (S. Rept. 92-414, at 77).  Figure 3 summarizes the Senate Public Works Committee’s explanation. 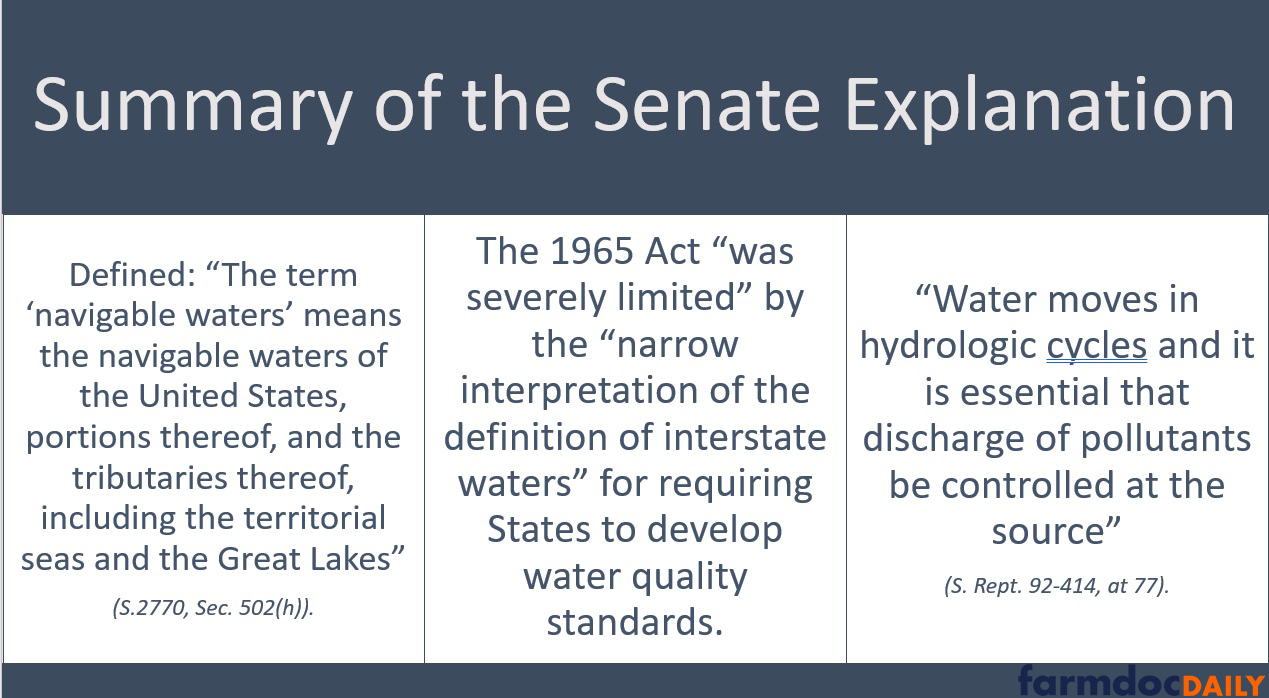 The Senate passed S. 2770 overwhelmingly—not a single Senator voted against the bill—on November 2, 1971.  The bill went over to the House where it was referred to the House Committee on Public Works, which reported its version (H.R. 11896) on March 11, 1972.  The House Committee bill largely mirrored the Senate bill with a focus on the federal permitting system for discharges into navigable waters.  The House Committee defined the term in a perfectly circular fashion: “The term ‘navigable waters’ means the navigable waters of the United States, including the territorial seas” (H. Rept. 92-911, at 53).  The Committee explained that it was “reluctant” to define the term “navigable waters” out of concern that any definition would be interpreted too narrowly for the purposes of regulating water pollution and that was “not the Committee’s intent” (H. Rept. 92-911, at 131).  Instead, the House explanation reinforced the point that the term “navigable waters” was jurisdictional, based on “the broadest possible constitutional interpretation” and not limited by any previous definition of the term (Id.).  Figure 4 summarizes the House position on the definitional question. 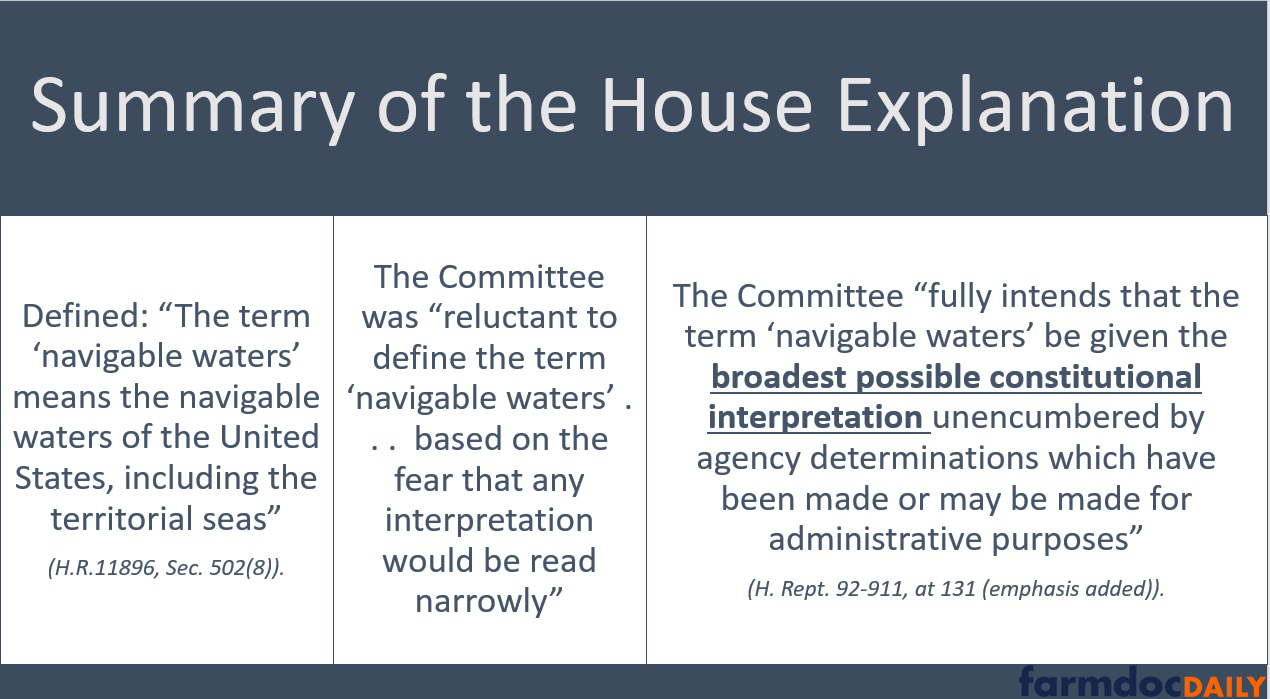 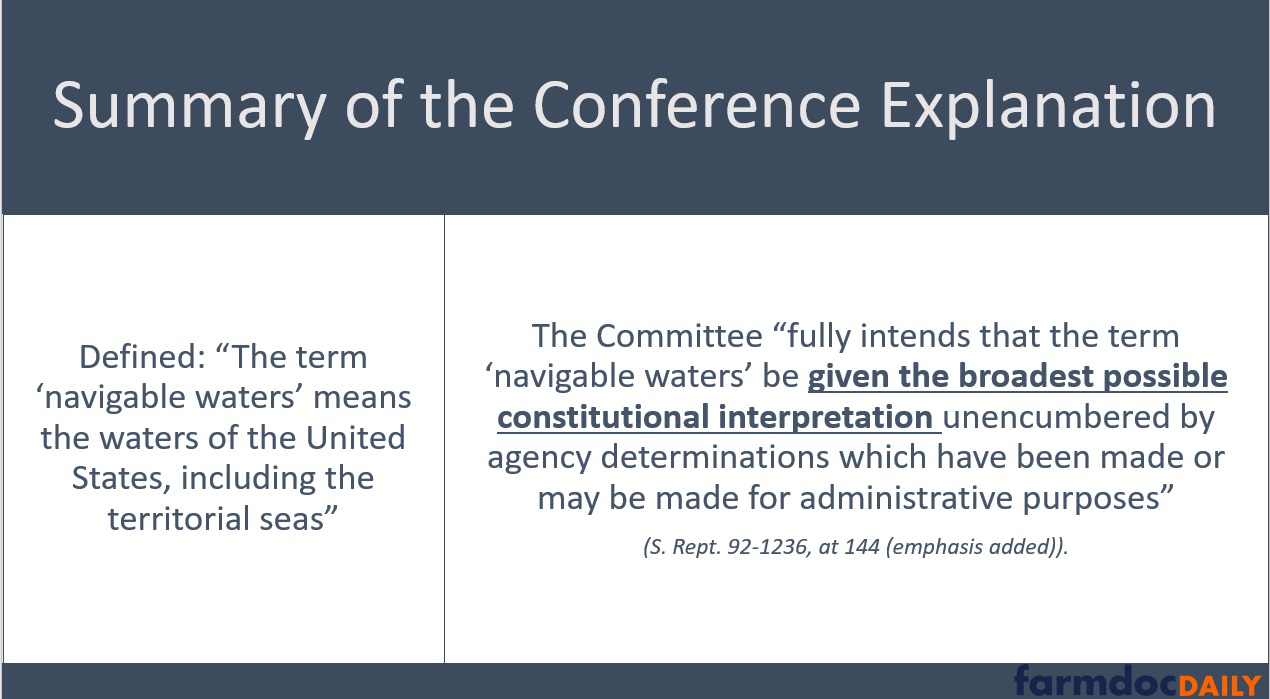 The work product of Congress in developing the legislation makes clear that the term “navigable waters” was not a definition of water but of the jurisdiction of federal regulation over water pollution or discharges.  Both the House and Senate Committees sought to avoid narrow interpretations of the regulatory scope, which both identified as a problem with the previous regulatory approach through the States in the 1965 Act.  The conference committee report reinforced this understanding by adopting the House position that the term was constitutional in nature and as broad as permitted.  Navigable waters, therefore, was the mechanism for federal regulation of water pollution and it was to extend as far as the Constitution permitted; or, in other words, the regulatory reach was as far as Congress had the power to extend it into state and local activities.

One final reality adds importance and weight to the definitional design and the objectives of Congress.  Not a single Senator voted against the bill either as reported by the Senate Committee or the conference committee, and only 14 Representatives voted against the House version; the final bill reported by the conference committee passed the House with only 11 votes opposed.  Maybe just as important, the bill was vetoed by President Nixon in October of 1972 and Congress overrode his veto.  The Clean Water Act therefore achieved enactment by the most difficult version of the legislative process provided for in Article I, Section 7 of the Constitution.  From a Congressional perspective, enactment in this manner adds further weight to the effort and what Congress intended with the bill.  Figure 6 summarizes the legislative path for the Clean Water Act, which was also discussed in an earlier article (farmdoc daily, April 22, 2022). 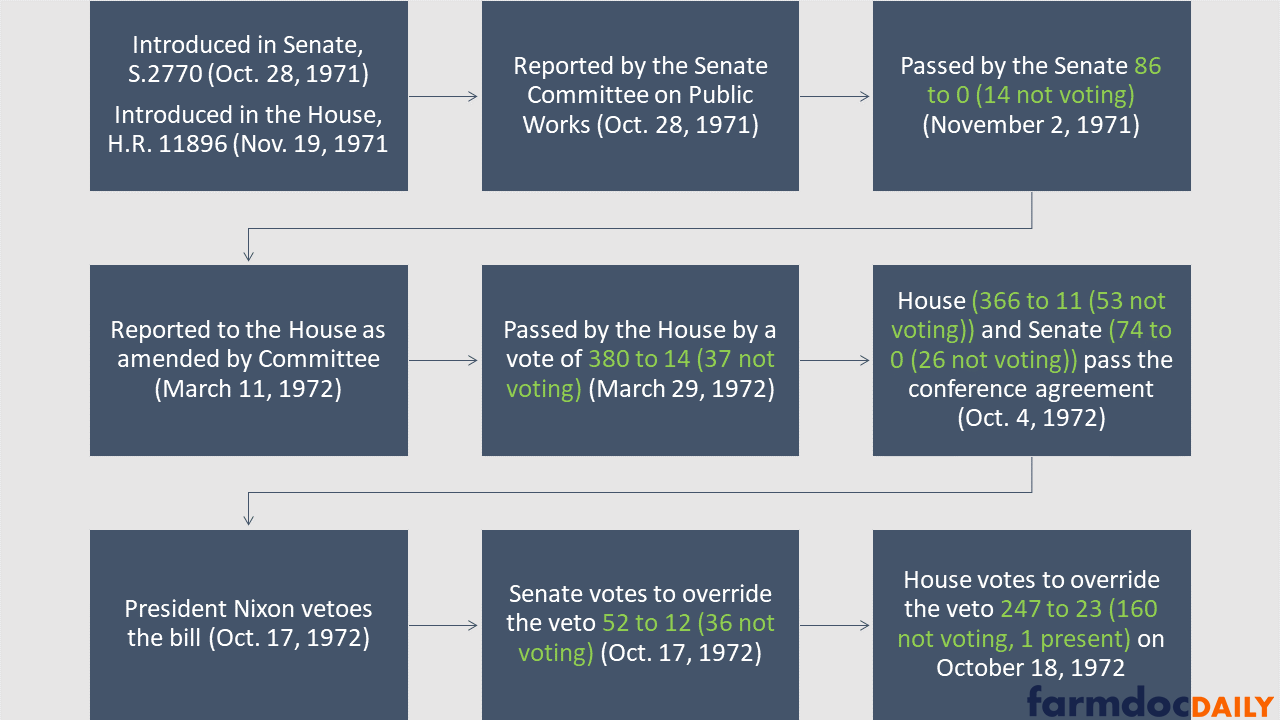 The words enacted by Congress, to which textualists have long proclaimed fidelity, is once again at the center of a controversial case before the Supreme Court.  Few issues expose the potential fallacies in the interpretative method known as textualism, however, like the debate over regulating wetlands under the Clean Water Act (on textualism see, farmdoc daily, April 7, 2022; Manning, 2005; Jellum, 2010; Nourse, 2012, Gluck, 2014).  If used for ideological purposes, textualism stops being legal analysis and degenerates into semantics or word games.  Justice Scalia’s opinion in 2005 provides a prime example: rather than interpret the work product of Congress, Justice Scalia relied on a dictionary in an attempt to define the word “waters” (Rapanos v. U.S., 547 U.S. 715, 732 (2006) (citing portions of a definition from Webster’s New International Dictionary (2d Edition, 1954)).  If the Supreme Court were so inclined, the current case before it could be an opportunity to correct course and return the legal analysis back to interpreting the work and words of Congress, rather than dictionaries.

At the intersection of science and law, the question in the case is by no means an easy or simple matter.  It has been made more difficult, however, by legal attempts to define something Congress was not itself seeking to define.  The legal question is the jurisdictional scope of federal regulation over water pollution; a jurisdictional reach limited by the Constitutional constraints on Congressional power, such as the Commerce Clause.  Congress authorized regulation of certain activities deemed to constitute discharges of pollutants.  Regulation was based on the hydrologic connections between those activities and the “chemical, physical, and biological integrity of the Nation’s waters,” which was the Congressional objective when it enacted the law over President Nixon’s veto (S. Rept. 92-1236; Mank 2003; Craig 2004).  Without that connection, regulatory reach ends regardless of whether the matter involves a wetland, a pond, or some sort of ephemeral stream.  Correcting course would best protect both property rights and water quality, providing certainty based in science rather than continually feeding litigation over legal semantics.

Coppess, J. "Another Curious Case for the Supreme Court; A Test for Textualism." farmdoc daily (12):47, Department of Agricultural and Consumer Economics, University of Illinois at Urbana-Champaign, April 7, 2022.

Coppess, J. and A. Endres. "Dead Zones & Drinking Water: Updates on Waters of the U.S., Part 2." farmdoc daily (9):59, Department of Agricultural and Consumer Economics, University of Illinois at Urbana-Champaign, April 3, 2019.

Craig, Robin Kundis. “The Stevens/Scalia Principle and Why it Matters: Statutory Conversations and a Cultural Critique of the Strict Plain Meaning Approach.” Tul. L. Rev. 79 (2004): 955.

Endres, A. and J. Coppess. "Dead Zones & Drinking Water: Updates on Waters of the U.S., Part 1." farmdoc daily (9):50, Department of Agricultural and Consumer Economics, University of Illinois at Urbana-Champaign, March 21, 2019.