On Wednesday, October 12, the USDA released its latest World Agricultural Supply and Demand Estimates, or WASDE. The WASDE report provides an updated point of reference for agricultural commodity price expectations. This article discusses changes made by USDA to its 2022/23 corn and soybean balance sheets and one thing to watch going forward: changes in South American production estimates. The size of the crop in Brazil and other South American countries will play a key role in determining export demand and price levels for US corn and soybeans. If projections for a record Brazilian harvest are realized, it will continue to dampen the impact of other bullish news as was seen in the market reaction to the WASDE report release last week.

Current US Supply and Demand Estimates

Lower projected corn and soybean yields were the main change to US corn and soybean balance sheets in the October WASDE found in Table 1. USDA dropped corn yield 0.6 bushels per acre to 171.9. Soybean yields was lowered 0.7 bushels per acre to 49.8. These declines follow larger yield reductions in the September WASDE report and bring total US production for 2022 in well below both initial expectations and last year’s crop. Current yield projections put US production down 8% for corn and 3% for soybeans relative to the previous 2021 crop.

Lower projected yields for corn and soybeans led to decreases in total available supply for the 2022/23 marketing year. While the yield decrease was proportionally larger for soybeans, total corn supply was down more as USDA also updated beginning stocks to reflect lower estimated inventories as of September 1 found in the most recent Grain Stocks Report released by the National Agricultural Statistics Service on September 30. 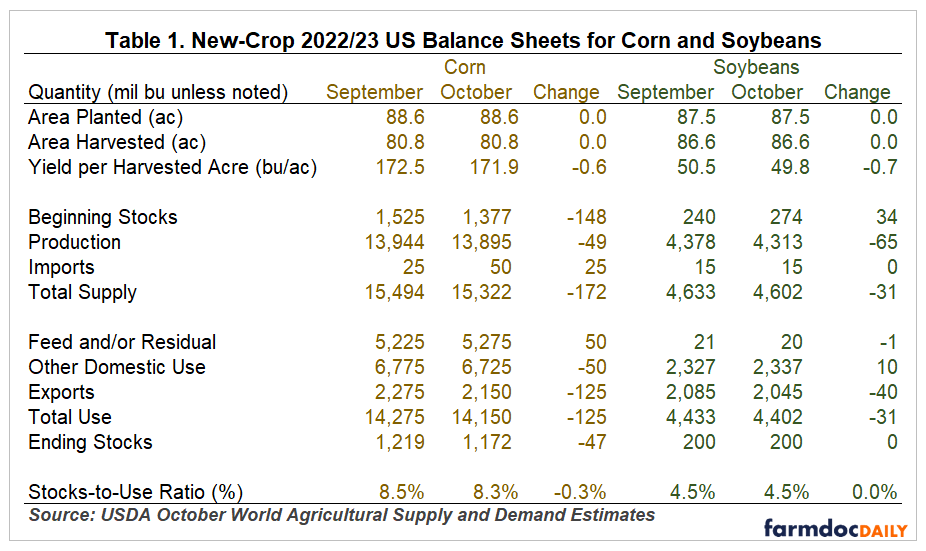 The latest WASDE balance sheets offset much of the yield-driven balance sheet tightening with reductions in use. This differs from the previous September WASDE report which saw large decreases in forecasted US ending stocks. Corn and soybean export forecasts decreased by 125 and 40 million bushels respectively, consistent with a strengthening US dollar and other headwinds in the global economy. With lower exports soaking up much of the decline in expected supply, ending stocks projections were down slightly for corn and unchanged for soybeans. Ending stocks-to-use for corn dropped from 8.5% to 8.3% and for soybean remained at 4.5%. Both figures signal very tight supply and demand conditions in the United States.

The Turning Point in the Global Crop Calendar

The October WASDE report coincides with a seasonal turning point in corn and soybean markets; the size of the 2022 US crop is nearly fully known, and attention turns toward domestic use and export demand. The opposite occurs in the Southern hemisphere; planting and weather news from Brazil and Argentina becomes more frequent and exports slow. This turning point is especially apparent in data on Chinese soybean shown in Figure 1. The US share of Chinese imports surges in the fall and drops off by April as Brazilian shipments increase. One notable exception to this seasonal pattern was late 2018 when China dramatically limited US soybean imports as part of the US-China trade war. 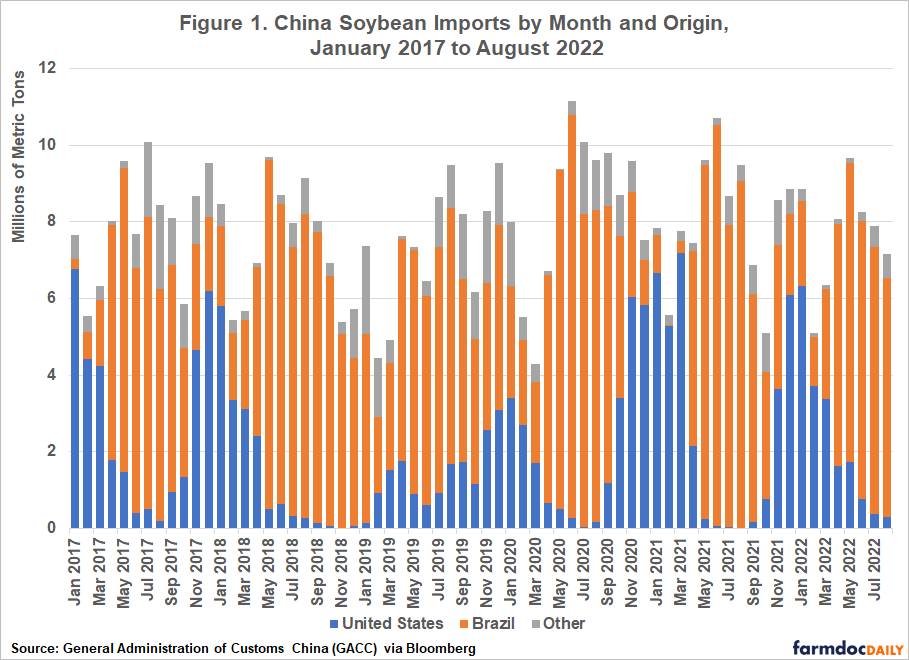 Historical data (See also: farmdoc daily July 18, 2022) suggest news about the size of the US crop is limited after October. Figure 2 shows the seasonal changes in USDA yield updates with emphasis on the current marketing year. Changes in projected yields after the October report are typically small. The majority of yield news is incorporated into USDA forecasts during the growing season, especially in the August and September reports. While changes in projected yield are possible later in the fall, such a November surprise appears more likely when USDA has already made large changes in yield forecasts earlier in the year and overall uncertainty is heightened. The relatively small changes in forecast yield seen this year appear to signal minor revisions to the production side of the US balance sheet going forward. 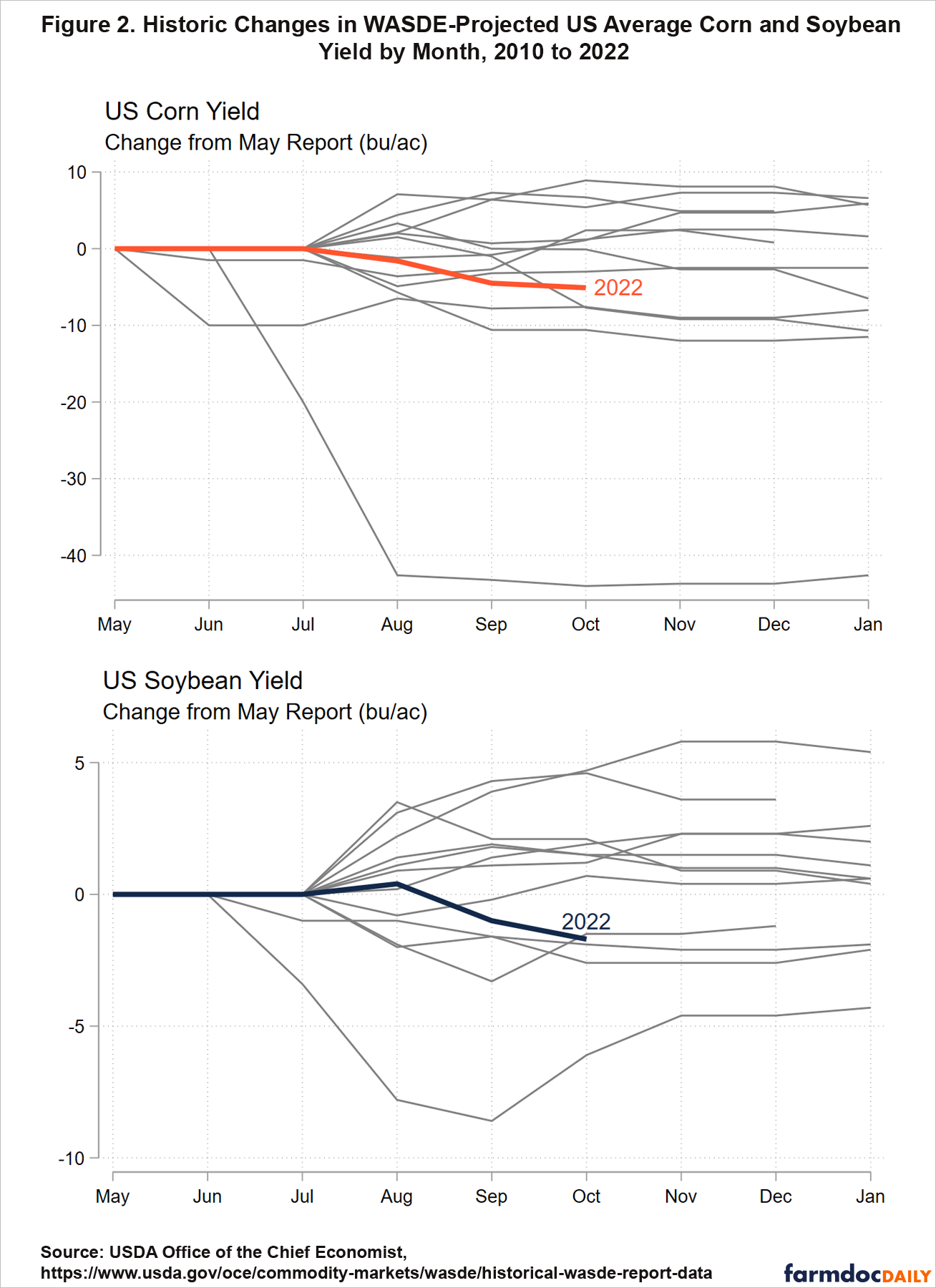 Higher Brazilian production contributed to an increase in projected world soybean ending stocks for 2022/23 of 1.6 million metric tons. This early optimism about Brazilian production, coming as Brazil is planting its first season crop, may continue to dampen the effect of whatever bullish news remains regarding the smaller-than-expected 2022 US soybean crop.

How much could the global balance sheet change based on forthcoming production news from South America? To estimate the magnitude of likely production changes, Figure 3 show the size of the total change in Brazilian corn and soybean production between the final and initial WASDE estimates. The average absolute change is 9.4 million metric tons for corn and 7.1 million metric tons for soybeans. suggesting substantial changes to Brazilian production estimates lie ahead. The three metric ton increase in Brazil soybean production observed in the October WASDE is small relative to typical changes in estimated crop size observed over the South American production season. 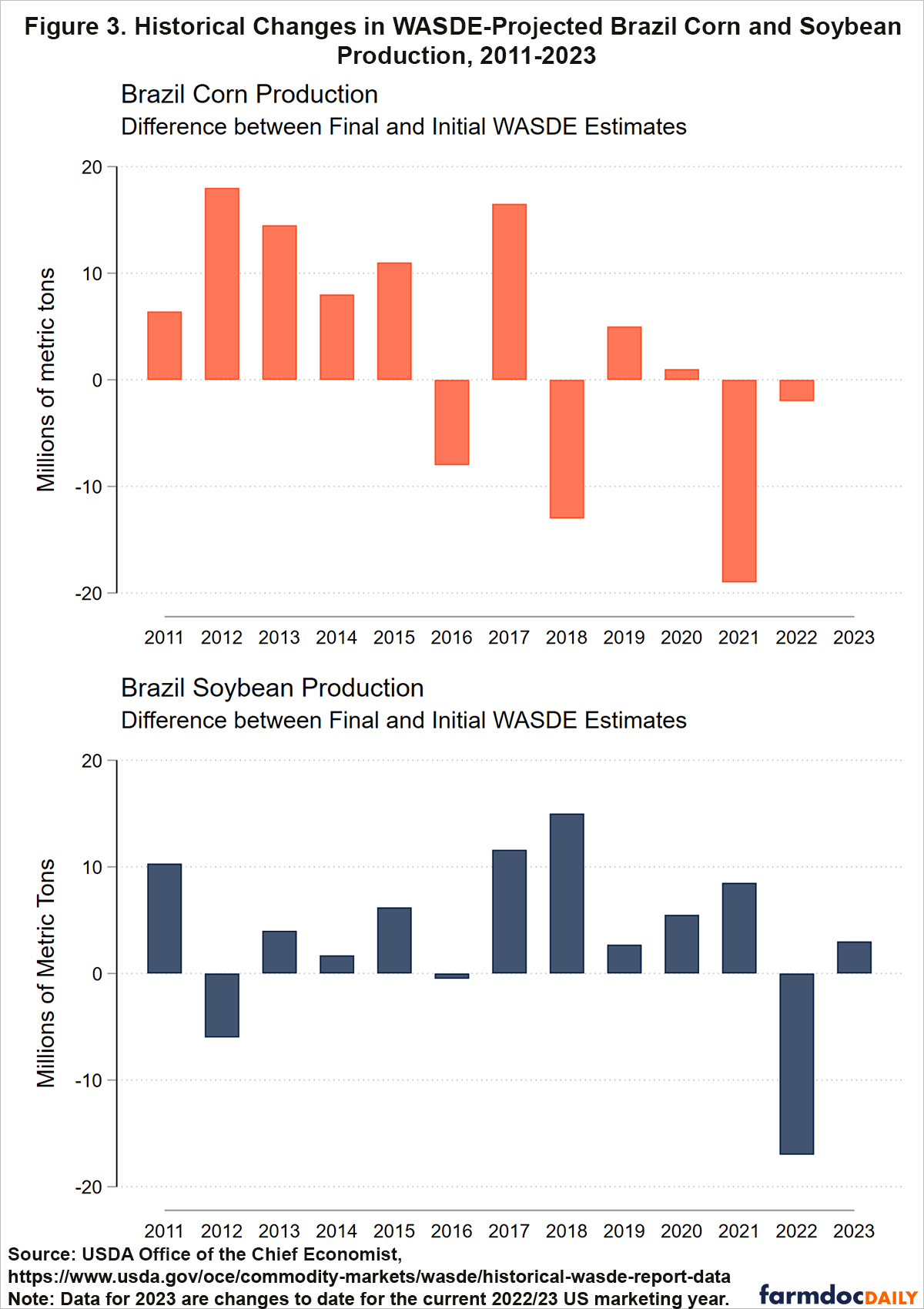 October typically marks a turning point in the news cycle relevant to corn and soybean prices. Focus shifts away from US production news and toward planting progress, weather, and yield forecasts for South America. In the October WASDE report, USDA made small but substantial changes to estimated Brazilian soybean production which have tempered the price impacts of lower than anticipated US soybean production. Soybean futures markets rallied nearly 40 cents per bushel immediately following the news of lower soybean yield estimates in the WASDE report, but these higher prices were temporary.

Looking ahead, projections for South America production will play a key role in price determination. Any bullish news from the US and elsewhere will have to contend with the prospects of a large increase in availability in early 2023. The price impacts of current logistics challenges for US exports, particularly those due to low water on the Mississippi River, also depends on harvest outcomes in South America. If Brazil’s crop is still expected to be large when US transportation difficulties ease, then demand for US exports may weaken. The turning point in the crop calendar may also signal a turning point for prices.