Brazilian grain producers are expected to begin planting in September.  If the weather cooperates, the Brazilian harvest could result in its largest grain harvest in history. The first forecast for the 2022/2023 season from the National Supply Company (Conab), the country’s food supply and statistics agency, projects farmers will produce more than 300 million tons of soybeans, corn, cotton, rice, wheat, and beans. That number is 14% higher than last season, when Brazilian farmers harvested an estimated 271.4 million tons of grains, an all-time high.

The expected growth of the Brazilian crop is attributed to two factors: a 2.5% increase in planted area and 11% higher yields than in 2022. The 2022 yields were reduced by a severe drought that affected Brazil’s southern states. Although production costs are expected to be higher in the coming season, they will be in part offset by positive margins resulting from high commodity prices, robust global demand, and a favorable exchange rate.

This article focuses on the first official government estimates for soybean and corn acreage and production in the 2022/2023 season, which has just started. In addition, we discuss the latest balance sheets on supply and demand estimates that bear watching.

The 2022-2023 soybean crop is projected to be 5,525 million bushels (equivalent to 150 million tons), an increase of 21.2% over the previous harvest (see Figure 1). Soybeans account for almost half of the total grain produced in Brazil. Brazilian soybean acreage is expected to grow 3.5%, to 105 million acres, according to Conab. It would be the first time the planted area will exceed 100 million acres. Most of the increase is expected to be as a result of the conversion of pasture to accommodate soybean planting. 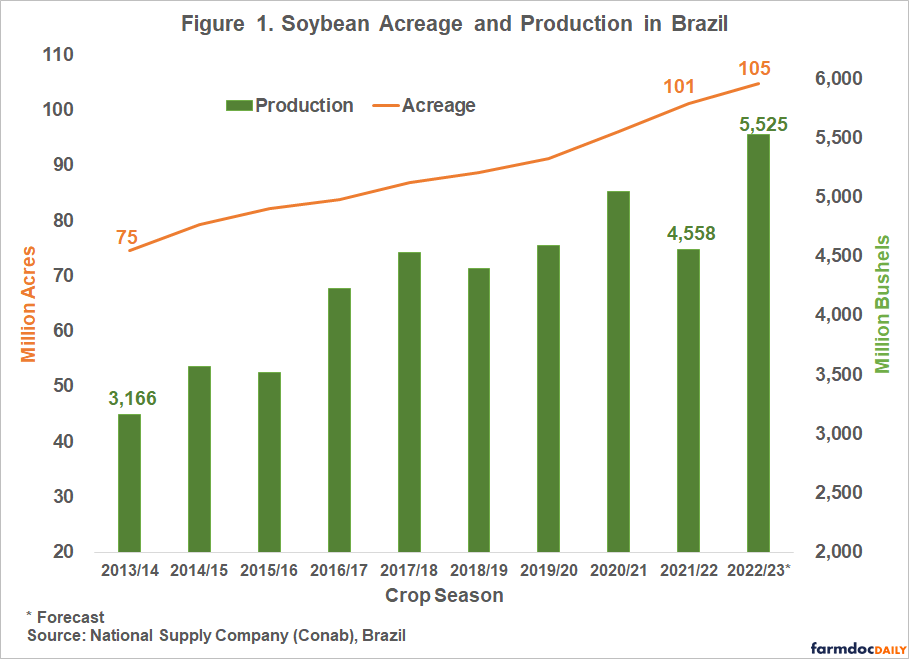 Average yields for the 2022/2023 season are expected to be 17% greater than last growing season, when severe drought affected southern states in Brazil. For example, soybean yields in the Rio Grande do Sul and Paraná states were half of what farmers harvested in 2020/21 (see farmdoc daily, February 25, 2022).

High prices and profits last season, coupled with the depreciation of the Brazilian currency relative to the dollar, have motivated farmers to increase their planted acreage. The expected margins for soybean remain positive, despite the rise in production costs, driven mainly by a spike in fertilizer prices. The net operating margin for soybeans in Mato Grosso, the largest soybean-producing state, should decrease from 59% last season to 23%, according to Conab.

When Russia invaded Ukraine earlier this year, there was uncertainty about whether Brazil would be able to import enough fertilizer for the 2022/23 season. However, Brazil did not have significant fertilizer supply problems for this season. From January to July, Brazil imported 23.6 million tons of crop nutrients, including potash and formulated products containing NPK, a 15.5% rise compared with the same period a year ago. By value, the import bill rose 175.3% to $16.1 billion, according to government data. Brazil relies on imports for about 85% of its fertilizer needs (see farmdoc daily, March 17, 2022).

Table 1 shows the latest balance sheets for soybeans released by Conab on August 24. Brazilian soybean exports in 2022/2023 (February 2023 to January 2024) are forecast at 92 million tons, a 22% increase from this season’s estimated shipments of 75 million tons. The forecast is based on available supplies, favorable exchange rates, and continued robust global demand. Brazil’s Central Bank projects the domestic currency to trade at about or above Real $5 to the U.S. dollar into 2024.

Brazilian total corn acreage is expected to grow 2.5%, to 55 million acres, according to Conab. More than 70% of the corn produced in Brazil is from the second corn crop (known as the safrinha), planted right after the soybean harvest, typically in January and February. The 2022-2023 corn crop is projected to be a record of 4,941 million bushels (equivalent to 125 million tons), an increase of 9.4% over the previous harvest (see Figure 2). 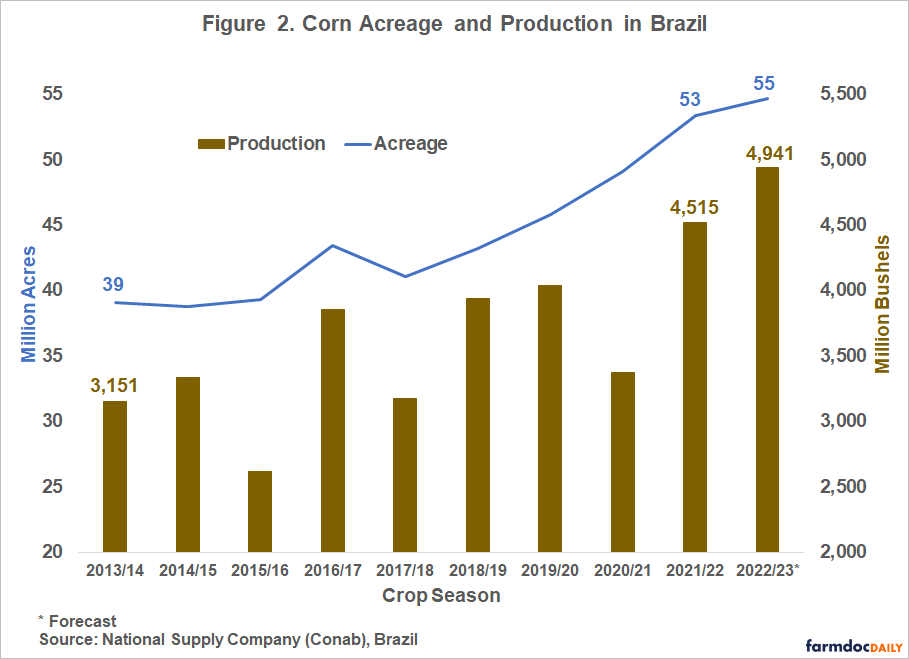 High domestic and global corn prices are the primary drivers for the expanded corn planting area. The net operating margin for corn in the 2022/23 crop season in Mato Grosso, the largest corn-producing state, should decrease from 9% last season to 7%, according to Conab. The rise in the price of fertilizers is one of the main factors for the increase in production costs.

In the 2021/2022 season, Brazil produced 4,515 million bushels of corn, a 31.7% increase compared to the previous harvest season affected by severe drought. Corn yields could have been even higher this year had it not been for the drop in production in the southern states earlier in the year, a result of a lack of rain caused by La Niña (see farmdoc daily, June 15, 2022). Average yields for the 2022/23 season are expected to increase by 6% over the previous season.

The growth in the safrinha crop is an opportunity for Brazil to double its corn production in the coming years. Brazil is the world’s third-largest corn producer and exporter, behind the United States and China. In addition to having new agricultural frontiers to increase corn production, mainly used as animal feed, Brazil is expanding its ethanol production. Currently, 17 corn ethanol plants are in operation, including 10 in Mato Grosso and 5 in Goiás, both midwestern states.

Brazilian corn exports in 2022/2023 are forecast at 44.5 million tons, a 19% increase from this season’s estimated shipments of 37.5 million tons. Table 2 shows the latest balance sheets for soybeans released by Conab on August 24.

There is an expectation that exports may grow even more due to the agreement signed with China in May. The two countries have agreed on an updated protocol outlining the phytosanitary – plant health and safety – requirements for the export of Brazilian corn to China. China has been seeking to diversify its corn imports, of which about 70% came from the United States and 30% from Ukraine last year. China is taking steps to accelerate imports of Brazilian corn; increased shipments from Brazil can still happen in 2022.

The first forecast for the 2022/2023 crop season from Conab projects that Brazilian farmers will produce more than 300 million tons of grains – which would be their largest harvest in history. The expected growth for the Brazilian crop will be supported by increased planted area and higher yields. The forecast margins for soybeans and corn are still positive, despite the rise in production costs, driven mainly by a spike in fertilizer prices. Brazilian soybean and corn exports in 2022/2023 are forecast to increase, pushed by available supplies, favorable exchange rates, and continued robust global demand.

Colussi, J., G. Schnitkey and C. Zulauf. “War in Ukraine and its Effect on Fertilizer Exports to Brazil and the U.S.” farmdoc daily (12):34, Department of Agricultural and Consumer Economics, University of Illinois at Urbana-Champaign, March 17, 2022.