Grain farm incomes have been above average in 2020 and 2021 and are projected to remain above average in 2022. For 2023, projections are for lower incomes because of higher costs and projected lower grain prices. Much uncertainty exists about 2023. Farmers have built equipment and financial reserves to withstand low incomes that will inevitably happen sometime in the future.

Figure 1 shows the average net income on Illinois grain farms enrolled in Illinois Farm Business Farm Management (FBFM), a cooperative education and farm record-keeping service operated in Illinois. Each year’s income is the average of those farms whose income comes predominately from grain operations. Average farm size and tenure have changed over time as farms have grown. In 2020, the average farm size was 1,300 tillable acres, with 23% of the farmland owned. 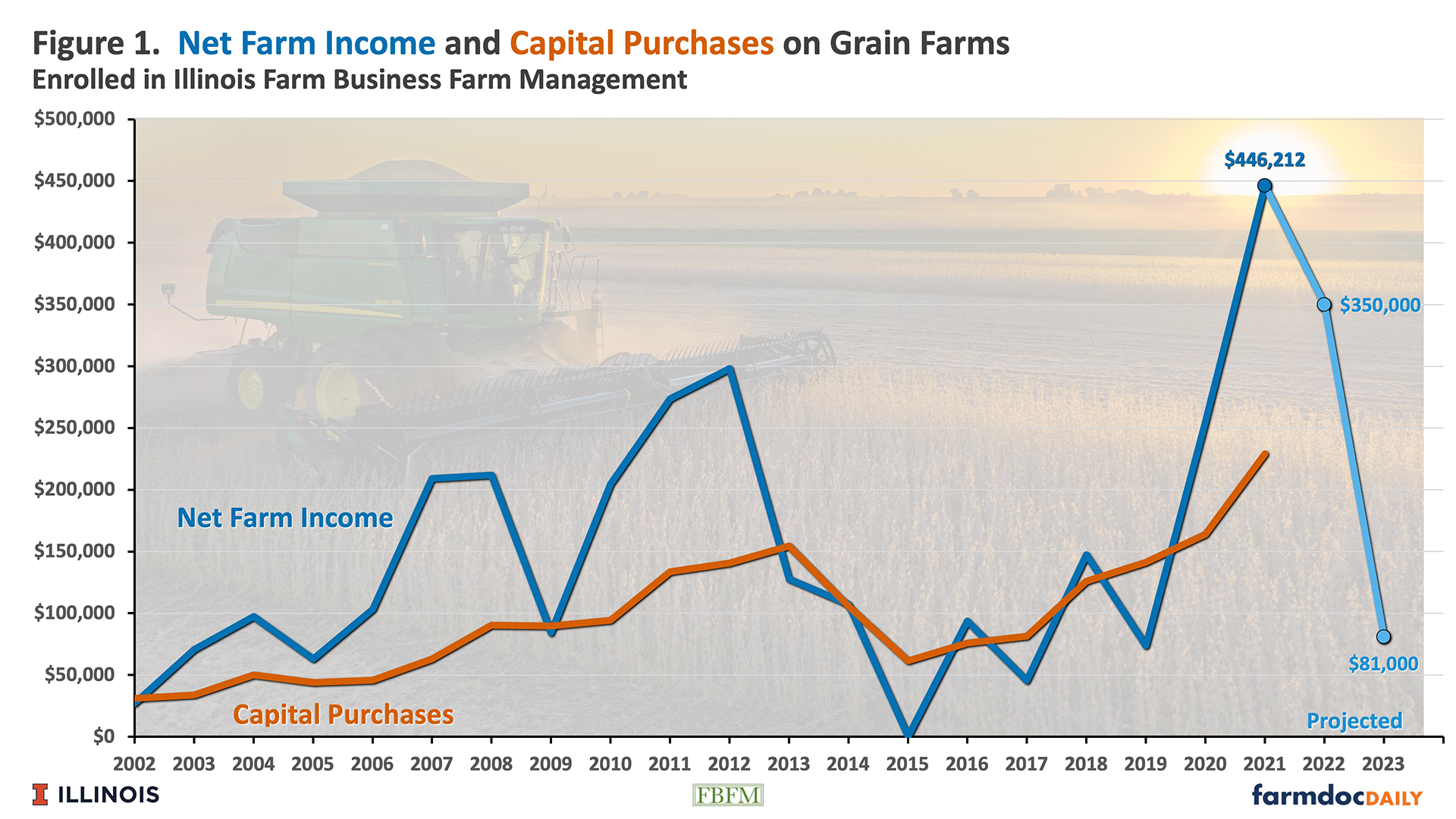 Grain farm income in 2021 was high primarily because of above-trend yields and historically high grain prices. In 2021, Illinois farmers averaged $5.90 per bushel for corn and $13.40 for soybeans. Both 2021 corn and soybean prices were well above averages from 2014 to 2020: $3.65 for corn and $9.64 for soybeans. In addition, government payments were small in 2021. Costs had begun to rise, but many farmers had yet to experience a significant increase in fertilizer and other expenses in 2021. 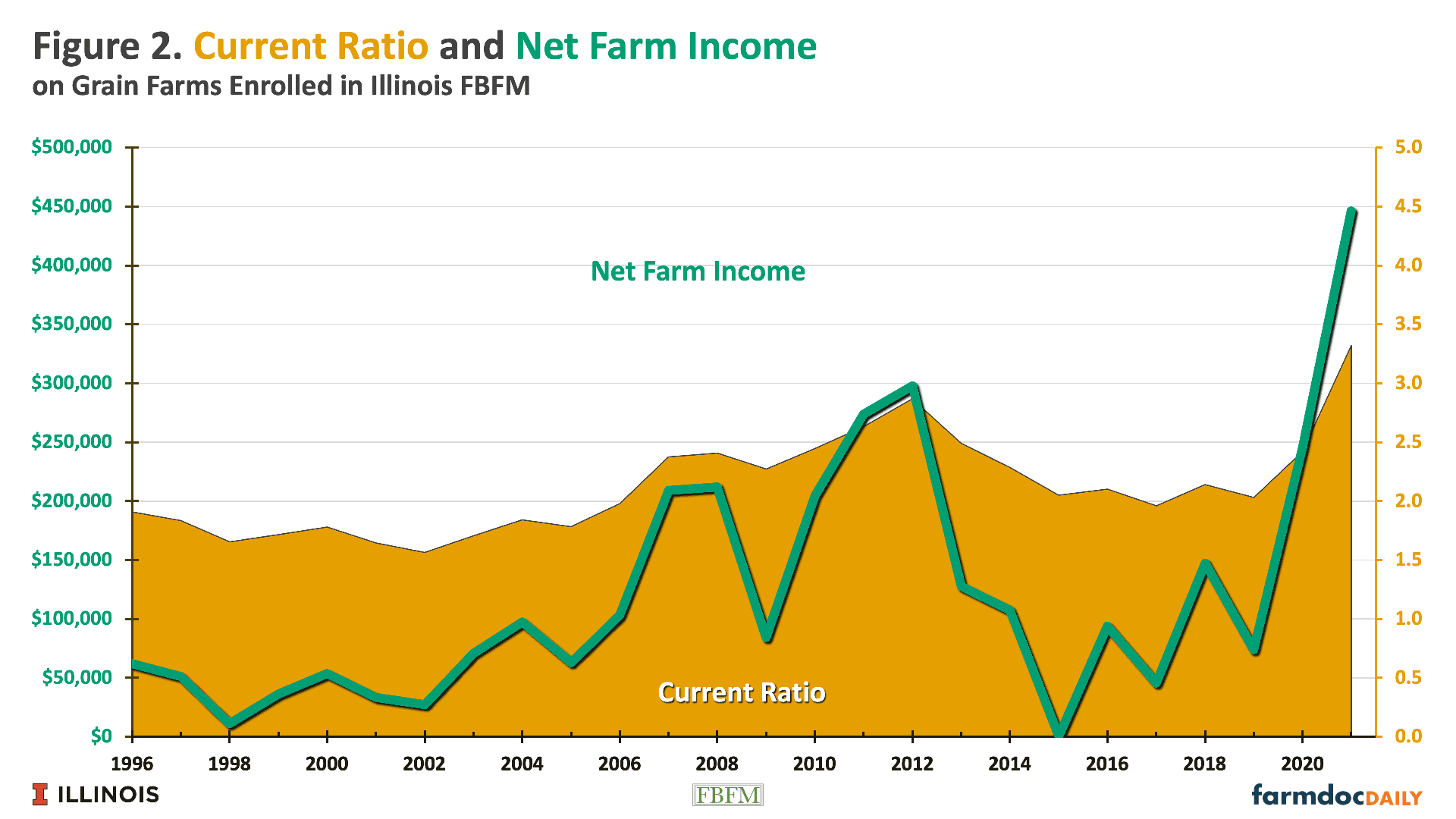 Current assets are primarily composed of cash and marketable securities, prepaid expenses, and grain inventories, with grain inventories valued using market prices at year end. Potential future declines in grain prices will necessarily reduce current assets and the current ratio. Even given this factor, farmers are in a strong current position. 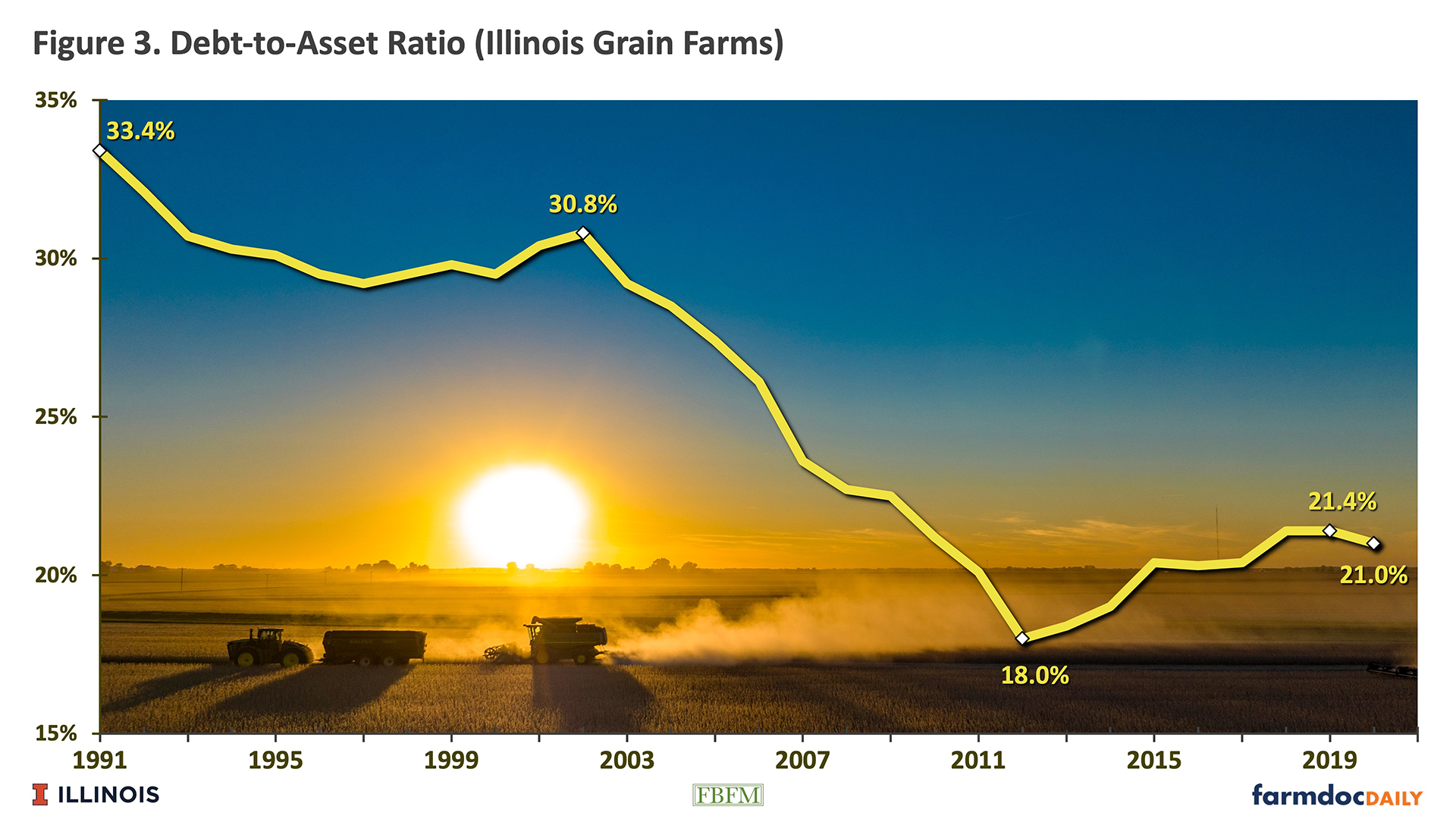 The above shows averages across all Illinois grain farms. Some farms will have fewer financial reserves. For example, younger farmers typically have higher debt-to-asset ratios and lower current ratios than an older cohort. Moving forward, farmers with more debt may face additional adversity as interest rates have risen.

Grain farm incomes have been above the historical average in 2020 and 2021, and projections indicate another above-average income year in 2022. Those incomes have occurred because of relatively high commodity prices. In addition, farmers have used this period of higher incomes to build equipment and financial reserves.

Projections are for a return to lower incomes in 2023. Obviously, much remains to be seen before 2023 incomes are realized. Higher incomes are possible with a combination of higher yields and continued 2022 levels of prices. However, current fall bids for 2023 indicate lower prices, likely built on an expectation of relatively good yields in South and North America. As is always the case, much uncertainty exists for incomes a year in advance.

However, it is reasonable to expect grain farm incomes to return to a lower level in the future, as always happens in agriculture. Higher costs will lead to lower incomes even at historically high corn and soybean prices. Prices below $5.00 per bushel for corn and $12.00 for soybeans will result in low incomes if not accompanied by higher yields or declines in costs.