Since 2000 an increasing gap has emerged between growth in consumption and yield of world feed grains, oilseeds, and food grains.  As a result, harvested land of these crops has increased 0.9% per year.  For 2022, 22 million more acres are needed, and the need grows each year.  This consumption-yield gap impacts the poor via higher food prices and the climate via land conversion.  Nevertheless, production enhancing research has received little attention in recent public policy legislation, implying continuing pressure on food prices and land use.

Data:  The data used in this article are from the Production, Supply, and Distribution Online (PSD) database maintained by the US Department of Agriculture, Foreign Agriculture Service.  The analysis begins with the 1981/1982 crop year.  Several countries and crops were added to PSD during the 1970s.  This starting point follows the end of the 1970 period of crop farm prosperity.

World Consumption:  World consumption of feed grains, oilseeds, and food grains since 1980 has a 2nd degree polynomial time trend (i.e. linear and squared time variables) (see Figure 1 and Data Note 1).  Relative to a linear model, the 2nd degree polynomial is higher with 99% statistical confidence for feed grains and oilseeds and 95% statistical confidence for food grains (see Data Note 2).  Lowest explanatory power is 98% for food grains (100% is a perfect fit).  For all three crop groups, trend consumption measured in quantity has grown each year, with the increase becoming larger over time. 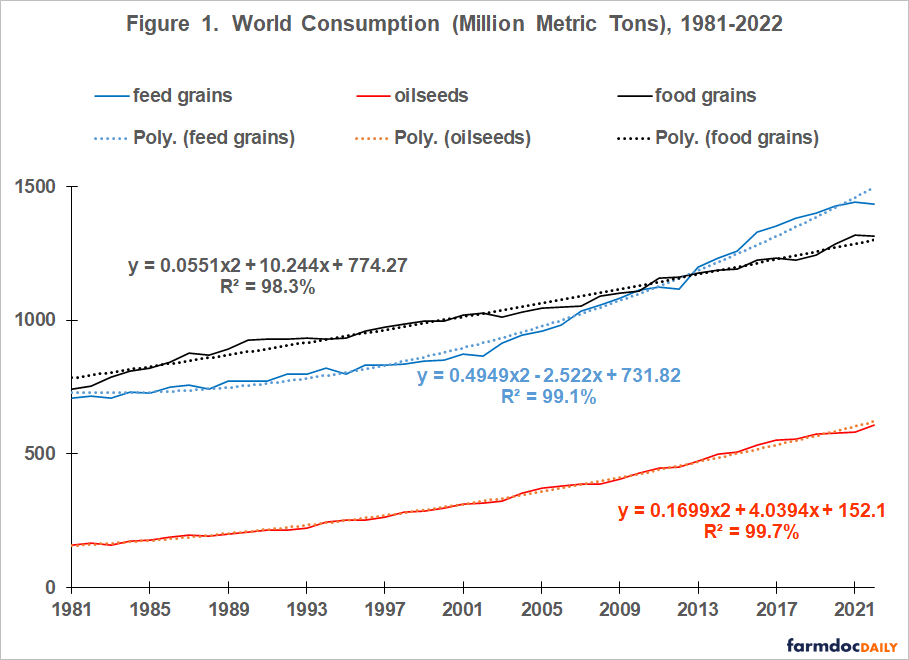 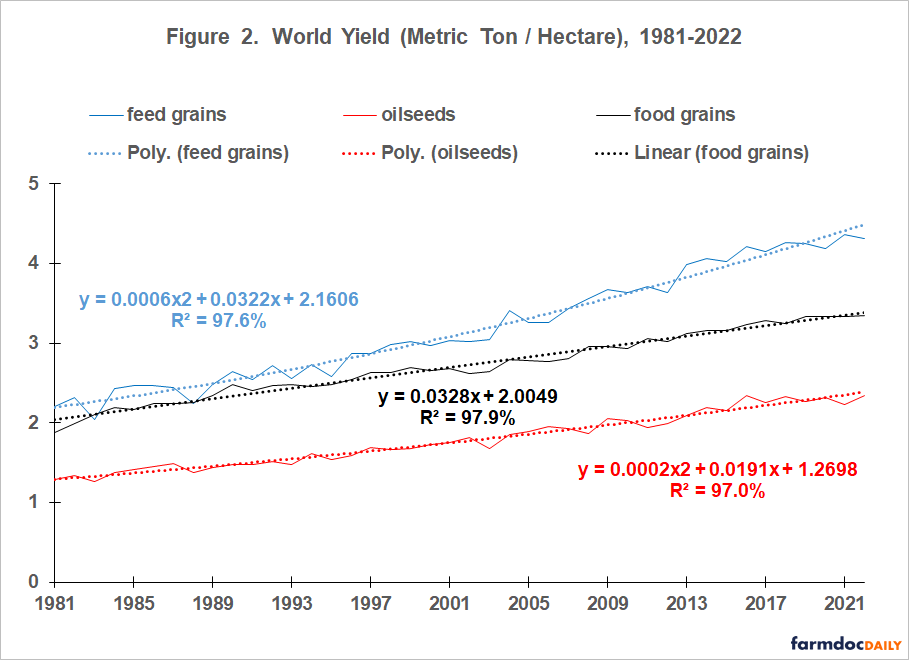 Yield Gap:  Historical time path of trend yield derived from the equations in Figure 2 are presented in Figures 3, 4, and 5 for world feed grains, oilseeds, and food grains, respectively.  Figures 3-5 also present the increase in yield needed to satisfy the trend increase in consumption derived using the equations in Figure 1 and assuming harvested area is the same as the preceding year (i.e. no increase in harvested area).  Data Note 4 contains an example of this calculation.

In 2000, world feed grains transitioned from needing less harvested land to needing more harvested land to satisfy growing consumption (see Figure 3).  The yield gap has increased since.  For oilseeds, trend yield has always been less than the increase in yield needed to satisfy the growth in trend consumption (see Figure 4).  More oilseed land has been needed, but the yield gap has not increased since the late 1990s.  For food grains, the two yields have similar paths, but in 2002 food grains transitioned from needing slightly less land to needing slightly more land each year (see Figure 5). 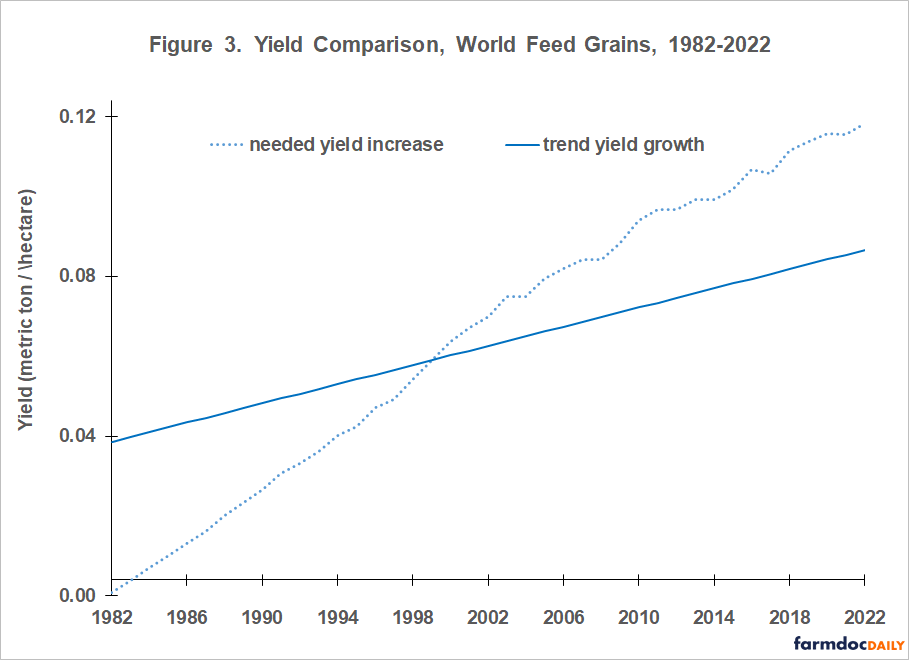 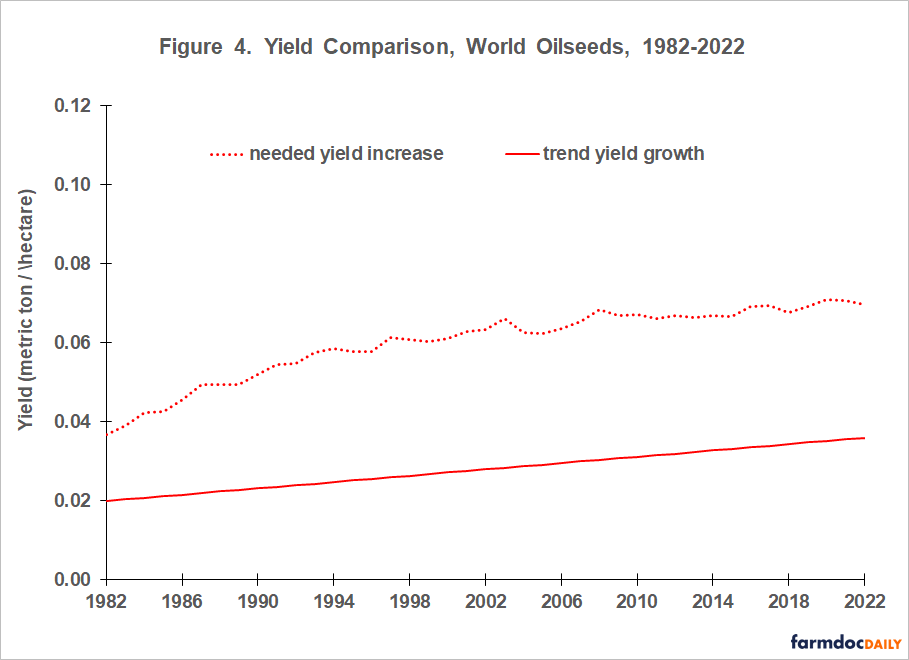 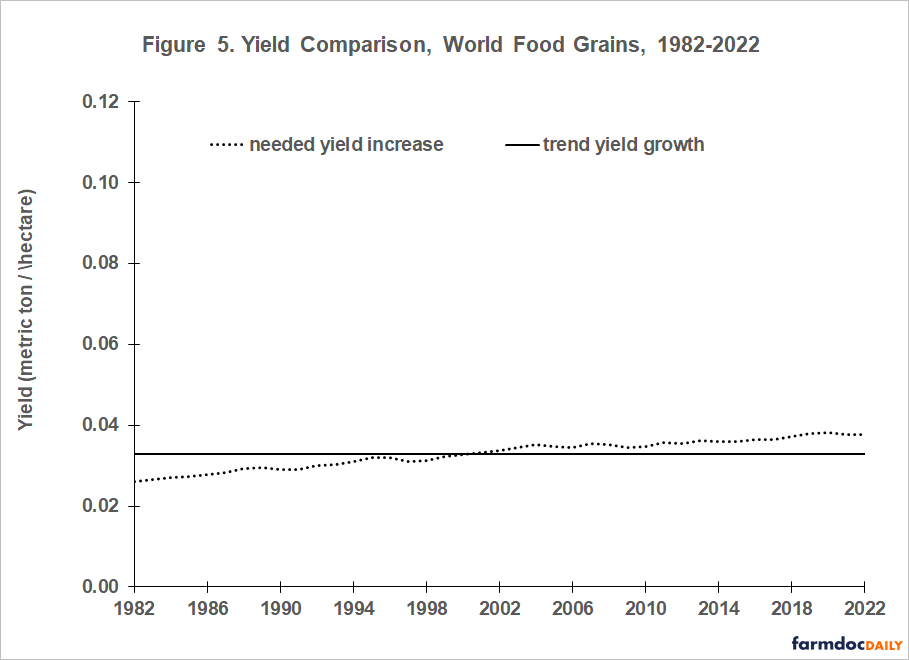 World Harvest Area:  The combined land harvested for feed grains, oilseeds, and food grains since 1980 underscores the story in Figures 3-5.  Harvested land exhibited no trend before 2002, varying around an average of 835 million hectares.  Since 2002, it has increased from 824 million hectares to a projected 986 million hectares for the 2022 crop year.  The rate of increase has averaged 0.9% per year, which translates, using 2022 projected harvested land, into a need for nearly 9 million more hectares or 22 million more acres of feed grains, oilseeds, and food grains per year.  This additional land is equivalent to adding the principal crop acres farmed in Illinois each year. 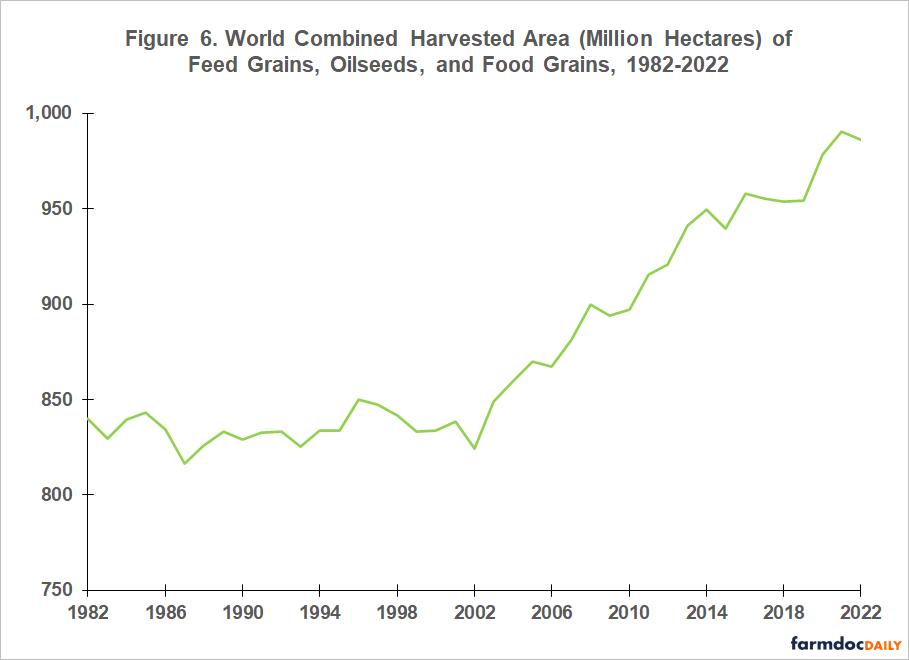 Since 2000, an increasing gap has emerged between growth in consumption and yield of world feed grains, oilseeds, and food grains. This gap is projected to continue over the next 10 years (see, for example, the projections by the Organisation for Economic Cooperation and Development – Food and Agriculture Organization, June 29, 2022).

Potential responses to this consumption-yield gap are:

Research to enhance multiple cropping and yield growth has received little to no attention in recent public policy legislation.  Of note, climate change legislation in the Inflation Reduction Act of 2022 provided no money for such research.  Given the lag that exists between research and impact on production, funding for research needs to be increased sooner rather than later if it is to help address land conversion and food price inflation.  The next opportunity for the US to prioritize this research is the upcoming farm bill.

Zulauf, C. “Update on US Interest Rates and Inflation.” farmdoc daily (12):155, Department of Agricultural and Consumer Economics, University of Illinois at Urbana-Champaign, October 12, 2022.