The USDA released its latest World Agricultural Supply and Demand Estimates, or WASDE on Friday, December 9. This report did little to adjust the market’s frame of reference for agricultural commodity price expectations. Most quantities on the US corn, soybean, and wheat balance sheets were left unchanged. Major recent news stories relevant to agricultural supply and demand – weather conditions in Argentina and Brazil and China’s pivot away from ‘zero-Covid’ restrictions on economic activity – have not yet fully materialized in terms of their impact on commodity production and consumption. These factors and others will work themselves into USDA’s projections in the coming months. In addition, USDA will move toward finalizing 2022 US production estimates in next month’s January WASDE report.

As the calendar year comes to its end, markets will begin to consider prospects for 2023 acreage and production. Prices and futures calendar spreads will work to balance old-crop 22/23 marketing year supply and demand with the expectations for the crop to be harvested in summer/fall of 2023. It is informative to look back at initial projections for the 2022/23 marketing year and compare them to current estimates. Realized 2022 US production was well below expectations and season average farm prices will exceed initial expectations. This past price increase points to the risk of lower price levels for the forthcoming 2023/24 marketing year.

Latest US Corn, Soybean, and Wheat Supply and Demand Estimates

While the December WASDE report does not typically contain major surprises for US crop balance sheets, this month’s report was especially quiet. Table 1 presents supply and demand balance sheets for corn, soybeans, and wheat. All production estimates remain unchanged from the November report. On use, corn exports are projected lower by 75 million bushels to 2,075 million bushels. The entire decline in corn exports went into higher ending stocks. Soybean and wheat use estimates remain unchanged from last month.

The change in projected US corn exports was widely anticipated by the market. US corn export commitments are lower than previous years and the pace of export sales remains well-behind that necessary to meet USDA forecasts for the 22/23 marketing year. (See farmdoc daily November 28, 2022) Even with lower projections for corn exports, significant sales progress is necessary in the next few months to meet the current forecast of 2,075 million bushels. Brazilian corn production is expected to rebound significantly from last year’s diminished crop. As that new harvest comes to market in the spring of 2023, US corn exports may face additional headwinds. 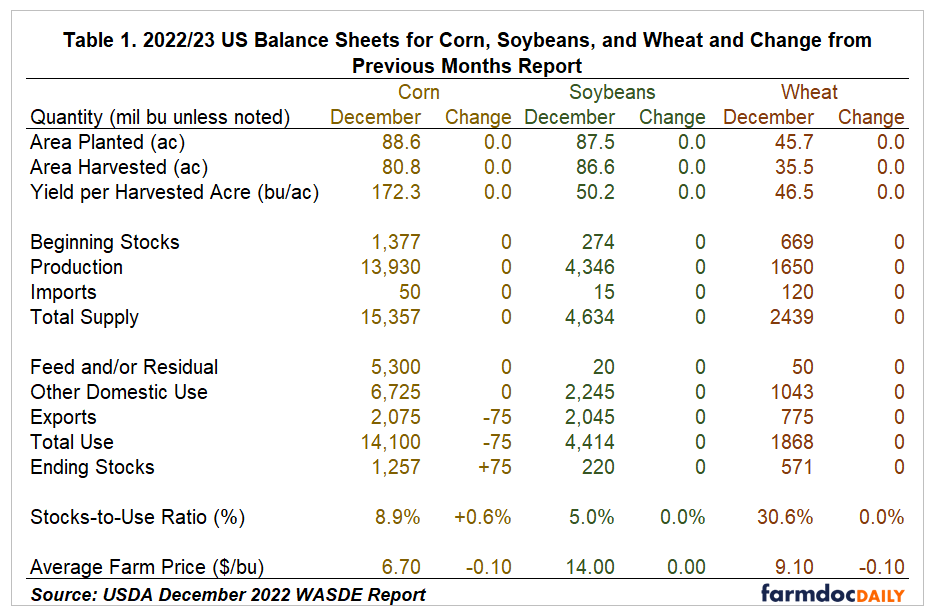 Overall, US corn and soybean market conditions remain relatively tight with the prospect for large price changes in response to any positive production news, especially that from South America. The corn stocks-to-use ratio was eased slightly to 8.9% in the December report. Soybean stocks-to-use remained at 5%. Major changes to the supply and demand balance forthcoming in the remainder of the 2022/23 marketing year appear likely to come from factors outside the US. Analysts will be looking outside the US for clues on market direction.

Meanwhile for wheat, US stocks remain comparatively high at 30.6%. While domestic use remains relatively strong (see Sowell and Swearingen 2022) US wheat exports remain stuck on 775 million bushels, the lowest level observed since 1971/72. US wheat prices have softened significantly since the dramatic rally observed in summer 2022, but US exports remain uncompetitive in the global market where many sellers vie for market share. To some degree, the US wheat market has turned inward and changes in the US balance sheet have less impact on price (see USDA/ERS 2017).

Where It Started, Where It’s At

To add some context to the latest USDA balance sheet projections for US grains and oilseeds, compare the US balance sheets from the December WASDE report to the initial estimates for the 2022/23 marketing year published by USDA as part of the annual Agricultural Outlook Forum back in late February 2022. These projections were made prior to the Russian invasion of Ukraine that served as a catalyst for the broad commodity price rally that peaked in early summer. They also came before drought conditions in parts of the Great Plains and Western Corn Belt significantly affected crop yields.

Production shortfalls were common across all three major agricultural commodities. Corn, soybean, and wheat production was 8.6, 3.2, and 15.0 percent below initial expectations, respectively. Drought conditions affected yields, but lower than expected acreage for corn and wheat also played a role. On the use side, export sales to date have been lower than initially anticipated for all three crops. Corn is  perhaps the biggest disappointment as noted above; 2022/23 US corn exports are now 275 million bushels or 12 percent below initial projections. However, commodity use has held up reasonably well and more than half of the decline in expected production for each major crop has been absorbed by lowered ending stocks. 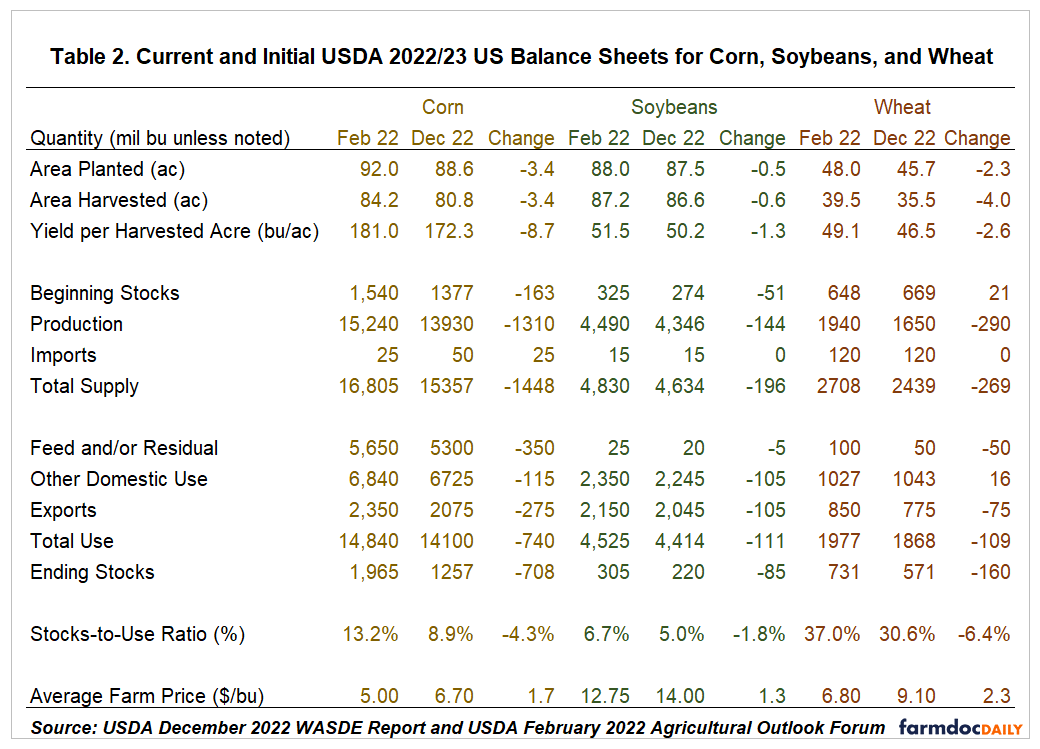 Projected season average prices increased for each crop. The current season average corn price projection is $6.70 per bushel or $1.70 above USDA’s initial forecast. Current soybean price levels are $1.30 per bushel higher than the initial forecast of $12.75 and wheat prices are $2.30 per bushel above the initial USDA forest of $6.80 per bushel. These price increases are roughly proportional to the size of the observed production shortfalls; wheat prices proportionally increased the most through 2022, followed by corn and then soybeans.

Going forward, initial 2023 production forecasts are likely to be similar to the levels given for 2022 by USDA back in February. Realized yields at or slightly above the 2022 trendline levels projected by USDA in the February outlook would likely mean lower price levels than what we see today, perhaps similar to those forecast for 2022/23 back in February. When inventories are relatively tight, market prices can move a lot – both higher and lower. Even though corn and wheat prices have declined in the second half of 2022, they remain well above long-run average levels. Considering what we knew at the beginning of 2022 points to downside price risk for major grains in early 2023.

Irwin, S. and J. Janzen. "Tempered Expectations for 2022/23 Supply and Demand for Corn and Soybeans." farmdoc daily (12):179, Department of Agricultural and Consumer Economics, University of Illinois at Urbana-Champaign, November 28, 2022.