In a previous post, we examined the question of whether corn planting in recent years has occurred at a faster pace than in previous decades. That analysis consisted of examining the percentage of the corn crops in Illinois, Indiana, and Iowa planted during the week of the greatest planting progress each year from 1960 through 2010. The peak week of planting was selected for analysis since there was likely considerable acreage left to be planted during that week and the largest numbers of producers were likely planting during that week. No trend toward planting a larger percentage of the crop in the peak week of planting since 1960 was found.

Here, the previous analysis is extended by examining planting progress per “day suitable for fieldwork” as reported in the USDA’s weekly Crop Progress report. This extension allows a more useful measure of planting progress since it standardizes for varying number of days during a week that are suitable for planting. Due to data limitations, this analysis was conducted only for Illinois for the period 1970 through 2011. We recognize that the estimates of weekly planting progress and the number of days suitable for field work reflect a fair amount of judgment and therefore may not always be accurate. However, consistent reporting procedures over time should provide useful information for analysis. 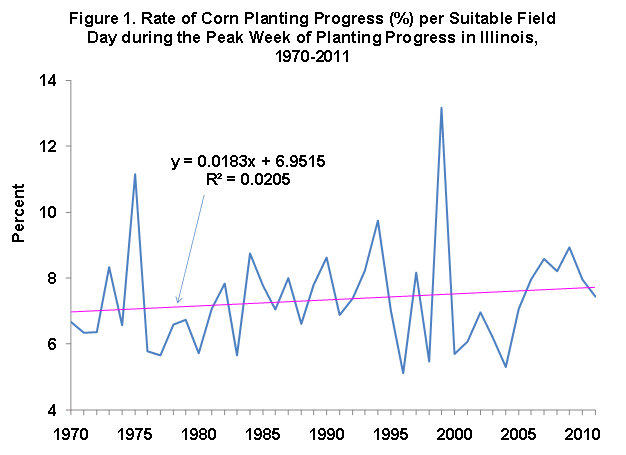 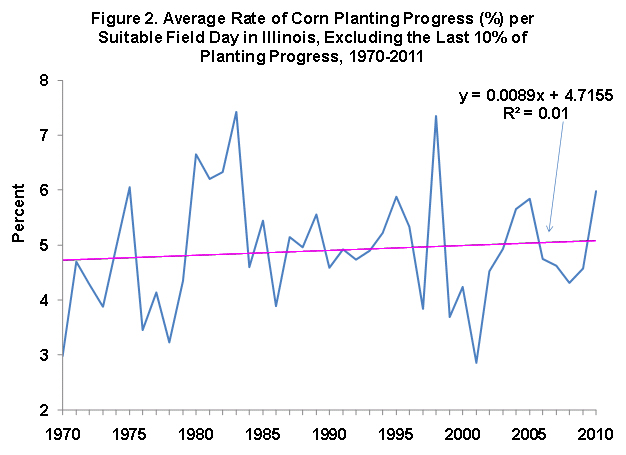 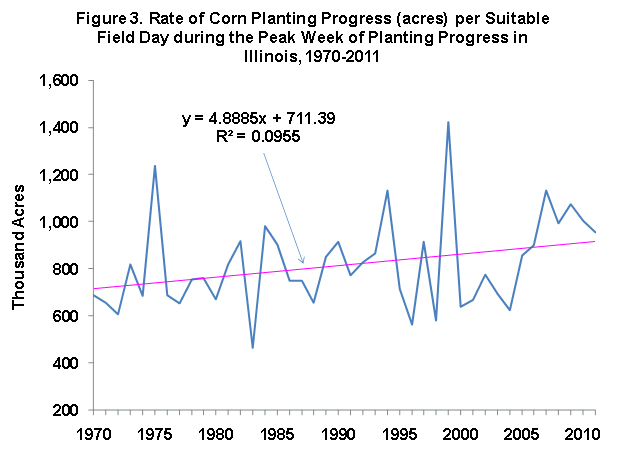 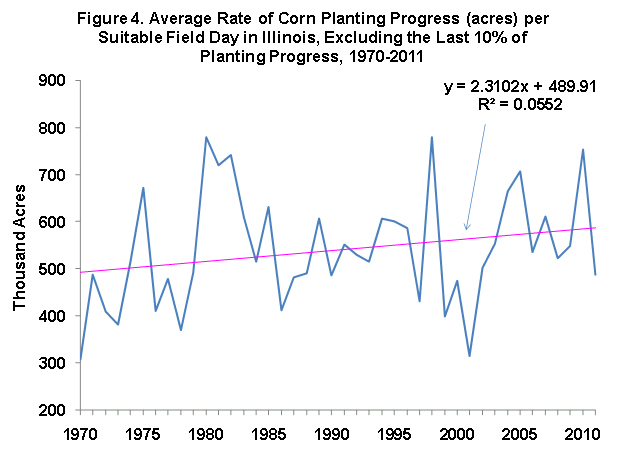 The bottom line is that farmers in Illinois can now plant about 15-20% more acres of corn per suitable field day than they could in the 1970s. This increase is likely due to improvements in planter technology and increases in the average size of planters. The results also indicate that while more corn acres in Illinois were planted per day from 1970 through 2011, there has been only a very small trend increase in the percentage of the crop planted per day. Taken together, these results suggest that planting speed has adjusted at about the same rate as the increase of corn acres in Illinois.

The results have a heightened importance this year due to widespread planting delays in the eastern Corn Belt. To the extent that the experience in Illinois reflects the experience of other Corn Belt states, we can use our estimates to project likely planting progress this week. The daily rate of planting progress in terms of percentage of acres planted is most appropriate, rather than acres planted, because this measure normalizes for the difference in the number of acres between Illinois and other states. With that background, consider the case of Ohio, which had only 19% of corn acreage planted as of May 29th. This means that about 3 million acres of corn remained to be planted in Ohio as of this date; a total that will likely influence both U.S. planted acres of corn and the yield potential for Ohio. If the week ending June 5th is the peak corn planting week for Ohio in 2011, our results suggest an average planting rate of 7.7% per day suitable for fieldwork. Total progress then depends on the number of suitable field days between May 30th and June 5th. Given recent rains and field conditions in Ohio, 4 or 5 suitable field days would seem to be an upper bound. This results in planting progress for the week of 31%-38% and total planting progress of 50%-58%. Regardless of assumptions used, the analysis highlights the fact that considerable corn acreage in Ohio is likely to be unplanted as of June 5th.