The role of speculation in the ongoing boom in commodity prices is hotly debated. President Obama recently waded into the debate, stating that, “It is true that a lot of what’s driving oil prices up right now is not the lack of supply. There’s enough supply. There’s enough oil out there for world demand… The problem is … speculators and people make various bets, and they say, you know what, we think that maybe there’s a 20 percent chance that something might happen in the Middle East that might disrupt oil supply, so we’re going to bet that oil is going to go up real high. And that spikes up prices significantly.”

A confusing aspect of this debate is that different definitions of speculation are used. Some use this label to refer to the large swings in commodity market positions by hedge funds. Others use speculation as a generic label for the large commodity market positions associated with long-only financial “index” investments. Still others focus on the commodity trading activities of “high frequency” or “algorithmic traders” that trade in massive amounts over extremely short time intervals.

We focus here are the controversy surrounding long-only commodity index investments. Regardless of form, these investments have a common goal – to provide investors with buy-side exposure to returns from a particular index of commodity prices. There is no doubt that monies in “index funds” soared over the last decade. Those who believe index funds have been responsible for creating bubbles in commodity futures prices make what seems to be an obvious argument – that the sheer size of index investment overwhelms the normal functioning of these markets.

The size of the buildup in index fund positions is illustrated in Figure 1 for the CBOT wheat futures contract using data from the CFTC. The number of contracts held by index funds in the CBOT wheat contract increased nearly fourfold from 2004 to 2006. However, notice also that the build-up in commodity index contracts and the peak level of index holdings pre-dates the 2007-2008 increase in commodity prices for which they are blamed. This observation alone casts serious doubt on the argument that index funds have been a major driver of commodity price movements. 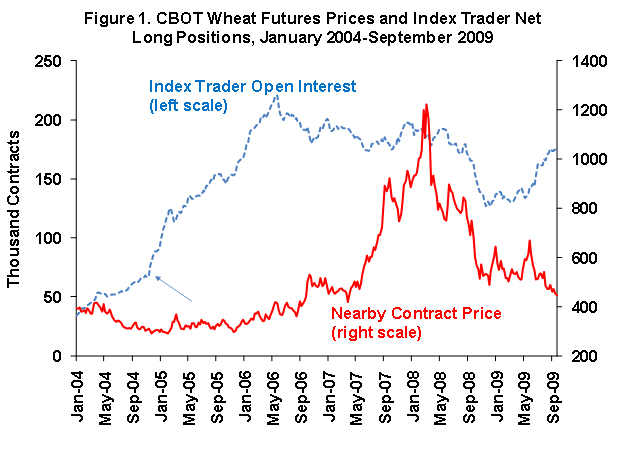 Formal statistical tests also generally fail to find a statistical link between index fund positions and changes in commodity futures prices. This lack of a relationship is illustrated in Figure 2 for CBOT wheat. The weight of the available statistical evidence is simply not consistent with the argument that index funds have created a series of bubbles in commodity futures prices. To date, no “smoking gun” has been found in the data. 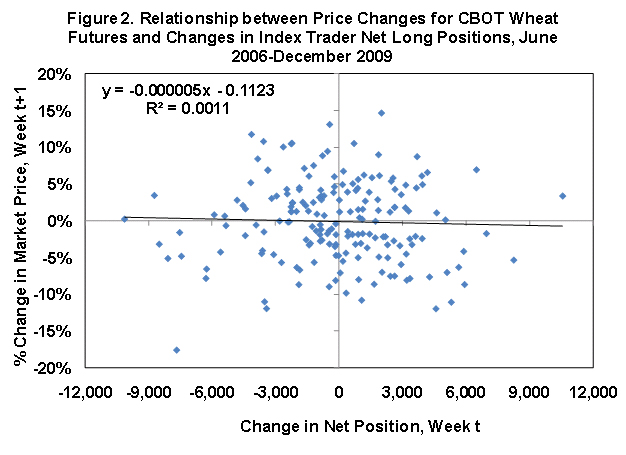 From a policy perspective, proposed new limits on speculation in commodity futures markets are not grounded in well-established empirical findings and could impede the price discovery and risk-shifting functions of these markets. In particular, limiting the participation of index fund investors would diminish an important source of risk-bearing capacity at a time when such capacity is in high demand. Commodity futures markets would become less efficient mechanisms for transferring risk from parties who don’t want to bear it to those that do, creating added costs that ultimately get passed back to producers in the form of lower prices and back to consumers as higher prices. Moreover, new speculative position limits in futures may simply push index fund investors into physical commodity markets, where index investments would not be subject to speculative futures position limits. Index fund positions in physical (cash) markets would provide a much more direct means by which financial investors could impact price discovery and stockholding in commodity markets; seemingly not the desired outcome of the regulatory drive to limit futures speculation.