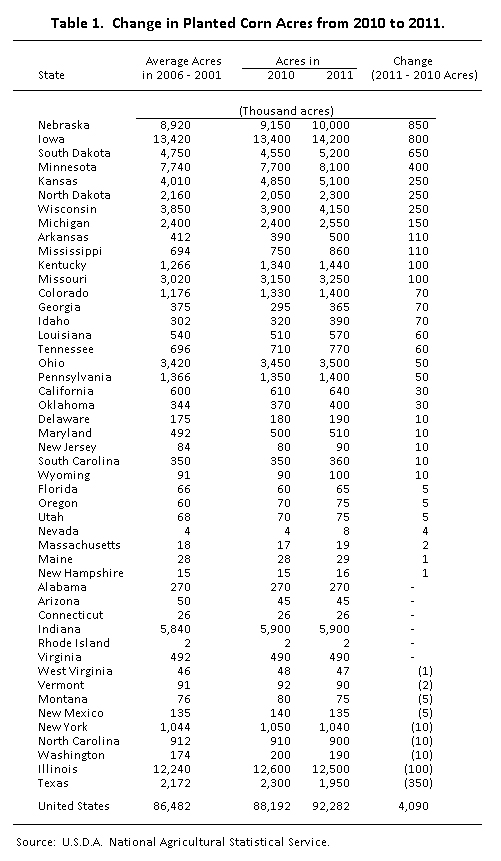 Of the 4 million acre increase, 60 percent occurs in four states: Nebraska (850,000 acres), Iowa (800,000 acres), South Dakota (650,000 acres), and Minnesota (400,000 acres). These four states are located in the western corn-belt where 2011 planting weather has been generally favorable. There are obvious exceptions to this favorable weather in areas where flooding has occurred; however, flooding has not resulted in acreage losses causing state acres to decline below 2010 levels.

Eastern corn-belt states have not lost acres. For example, Ohio has an increase of 50,000 acres and Indiana has the same acres as in 2010. Both of these states have experienced a wet spring, leading to concerns about whether acres would be prevented from planting or shift to soybeans. While shifting may have occurred, changes did not result in a decline in corn acres.

Illinois has a decline in acres. Illinois acres for 2010 are reported at 12,500,000, a decline of 100,000 acres from 2010 levels. While small, Illinois’s decrease in acres differs markedly from Iowa’s large increase. A wet spring may have contributed to Illinois’ decline. Moreover, many Illinois farmers had poor yields on corn-after-corn in 2010, which may have lead farmers to back off from planting corn-after-corn in 2011.