The health of many commercial banks in the U.S. has improved in 2011. However, many of the large U.S. banks continue to face significant challenges, especially in their residential and commercial mortgage portfolios. Additional regulatory costs including the Dodd-Frank Wall Street Reform and Consumer Protection Act present challenges for small and large banks. As a share of total operating costs, these regulatory costs are greater for smaller banks. Regulators are also placing higher regulatory emphasis on banks with significant concentrations in industry sectors such as agriculture.

In spite of these headwinds, agricultural banks have improved profitability in 2011. The rate of return on assets (ROA) for agricultural banks (banks whose agricultural production loans plus real estate loans secured by farmland exceed 25 percent of total loans and leases) in the second quarter of 2011 was 1.13%, the highest quarter since the second quarter of 2008 (FDIC). This level exceeded the ROA for all FDIC insured banks (0.85) as well as banks with concentrations in commercial loans (banks whose commercial and industrial loans, plus real estate construction and development loans, plus loans secured by commercial real estate properties exceed 25 percent of total assets) and mortgage loans (banks whose residential mortgage loans, plus mortgage-backed securities, exceed 50 percent of total assets). Profitability at agricultural banks has exceeded all banks and banks concentrating on commercial or mortgage loans through the financial crisis and economic downturn (Figure 1). Moreover, 96% of agricultural banks were profitable in 2011Q2. This level of bank profitability has increased from a low of 61% in the second quarter of 2009 (Figure 2). 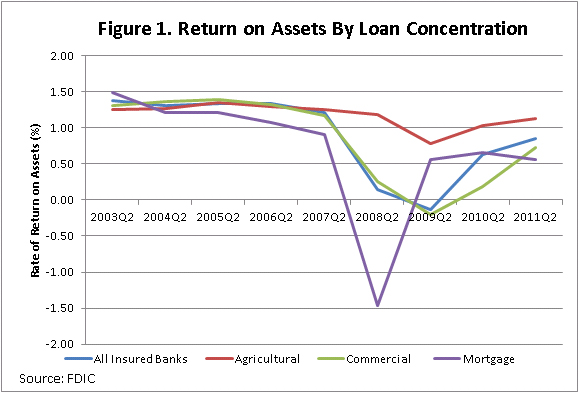 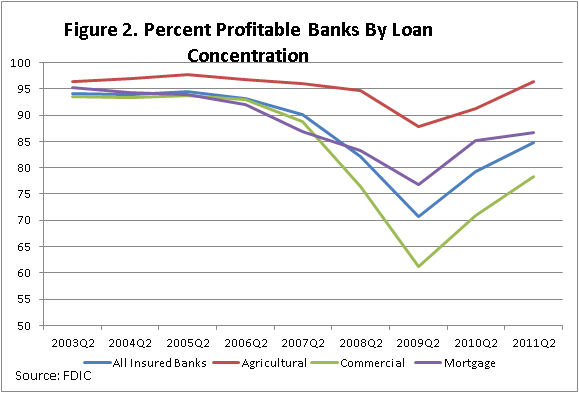 Although elevated from pre-crisis levels, the ratio of problem loans to total loans at agricultural banks, is less than 50% of the level at all banks and banks concentrated in commercial loans or mortgages. Net charge-offs at agricultural banks have only exceeded 1% in 2009Q4 (Figure 3). Noncurrent loans (nonaccruing loans and loans past due more than 90 days) have not exceeded 2% and are clearly at levels below the banking sector as a whole and the banks with concentrations in commercial loans and mortgages (Figure 4). 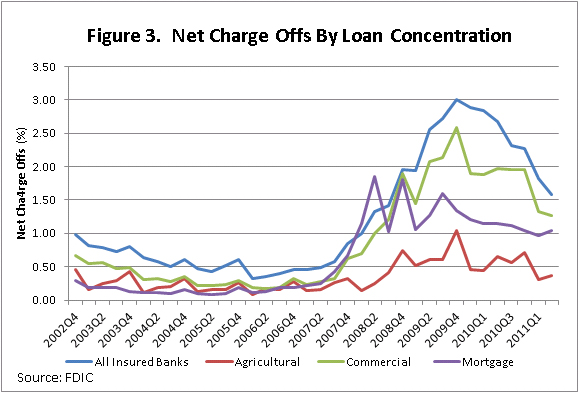 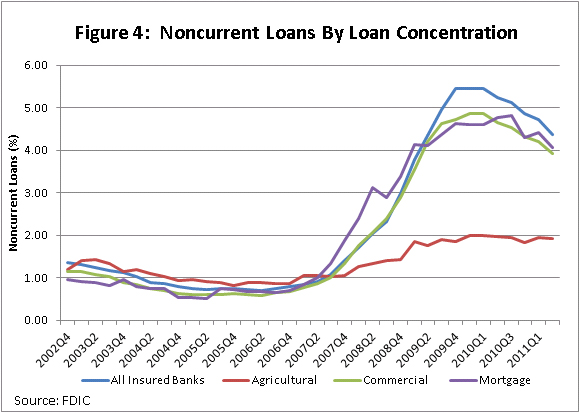 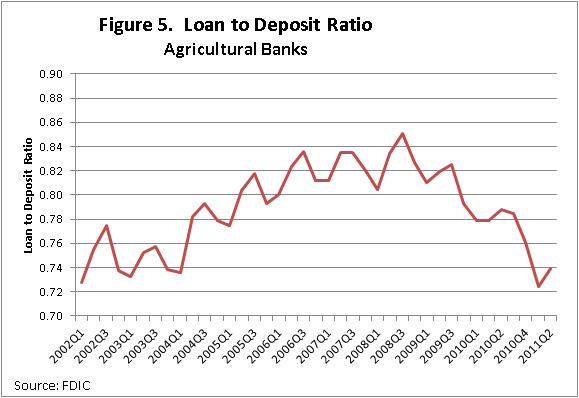