Farming has always been a very capital intensive business. Substantial investments in land, buildings and machinery are needed to remain viable. Recent farmland price increases are well documented. The Chicago Federal Reserve Bank reported the highest year-over-year increase in farmland values since the 1970s at 25 percent.

Investments in farm machinery and equipment have also increased recently. The average capital purchases of machinery, equipment and buildings have been approximately $90,000 per year from 2008-2010 (Figure 1). The increase in capital purchases was partially triggered by the increases in net farm income starting in 2007. Due to the improved cash flows, some farmers were catching up replacing older equipment that was not replaced earlier in the decade due to lower incomes levels. Others took advantage of the increased liquidity and depreciation tax laws to manage their income tax liabilities. Advances in equipment size and technology have also provided motivation to increase equipment purchases with the goal of increasing efficiency and timeliness of field operations. 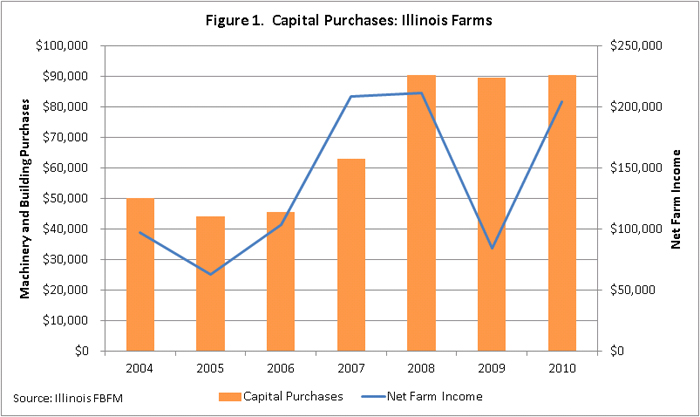 As expected, there are reductions in per acre cost of machinery value as farm size increases. The market value of equipment recorded on Illinois grain farmers’ balances sheets on a per acre basis is reported in Figure 2. For 2010, the value per acre for a 500 acre farm is $485, but decreases to $395 for a 2,500 acre farm. The levels are approximately $150 per acre higher than 2006. On a per acre basis, debt used to finance machinery purchases does not vary substantially by farm size varying from $60 to 80 per acre. Moreover, there was negligible increase in intermediate debt financing from 2006 to 2010 indicating much of the increase in capital purchases was financed with cash. 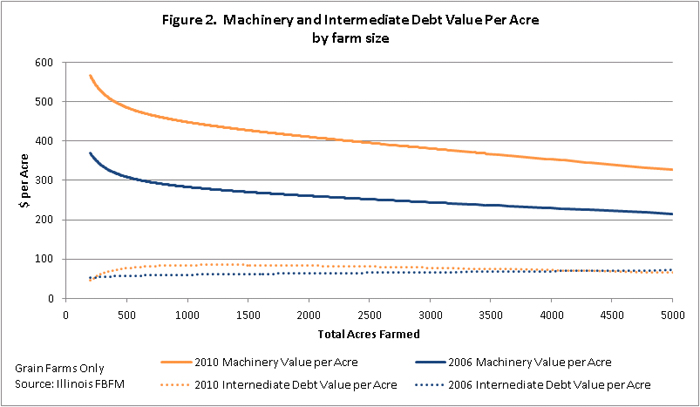 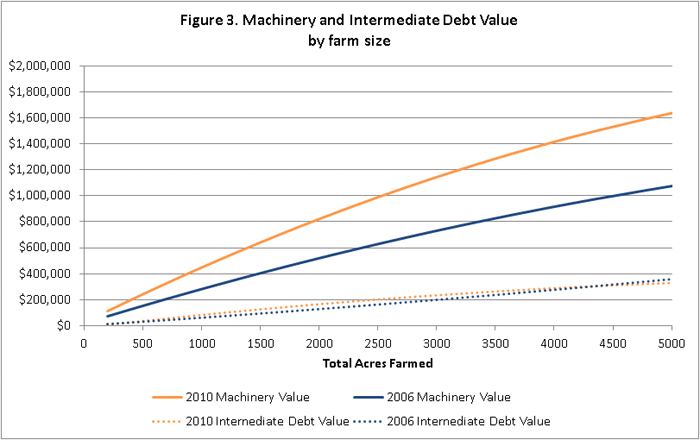 In summary, investments in farm machinery have been substantial these past three years. It appears that, on average, farmers have not used substantial leverage to increase these investments. Used farm machinery has also maintained market values contributing to the strong levels of machinery held by farmers. High agricultural profitability is a primary driver in maintaining these capital purchase levels and facilitating a strong used machinery market.