In a recent post, we began exploring basic pricing relationships in the energy markets. The first post examined crude oil and gasoline prices. In this post, we will take a look at the relationship between crude oil and natural gas prices.

Figure 1 shows one benchmark for the price of crude oil in the U.S.–the nearby price of NYMEX crude oil futures prices on a weekly (Thursday) basis since early 2007. The second line charted in Figure 1 is the nearby price of NYMEX natural gas futures prices, also on a weekly (Thursday) basis. Previous to early 2009 crude oil and natural gas prices tended to move in tandem, but then prices for the two markets clearly decoupled. Since 2009 crude oil prices have continued to recover from recession lows while natural gas prices have essentially remained flat in a narrow range between about $3.50 and $5.00 per million BTU. 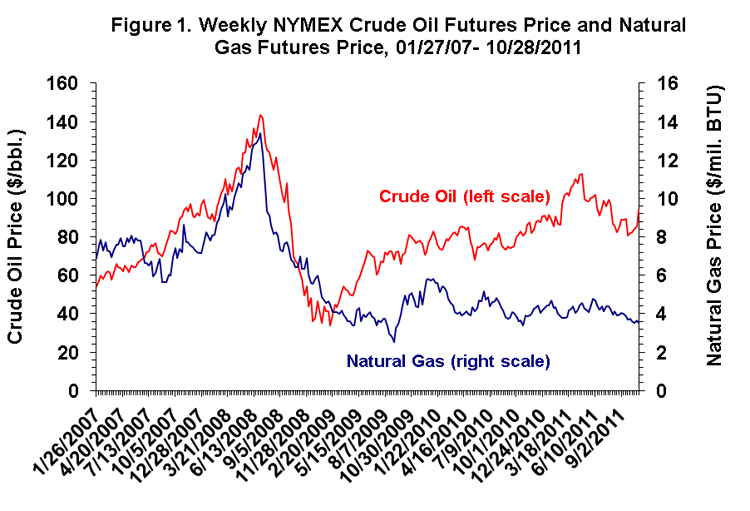 What explains this dramatic break in the relationship between crude oil and natural gas prices? One word–fracking. This is short-hand for a production technique known as hydraulic fracturing, which is the use of liquids forced into deep rock formations to “crack open” previously unreachable deposits of natural gas. The application of hydraulic fracturing and horizontal drilling techniques in shale rock formations has had a dramatic impact on the supply of natural gas in recent years, and not surprisingly, the large increase in supply has kept a lid on natural gas prices.

An even more direct way of demonstrating the impact of recent shale gas discoveries is shown in Figure 2. It presents the ratio of crude oil to natural gas prices. The average ratio was about 10 until 2009, meaning it took about 10 units of natural gas to purchase one barrel of crude oil. Since that time the ratio has steadily trended upward reaching about 27 in recent weeks. It now takes about three times as many units of natural gas to buy one barrel of crude oil as it did in 2008. That is a big change in pricing relationships by any standard. 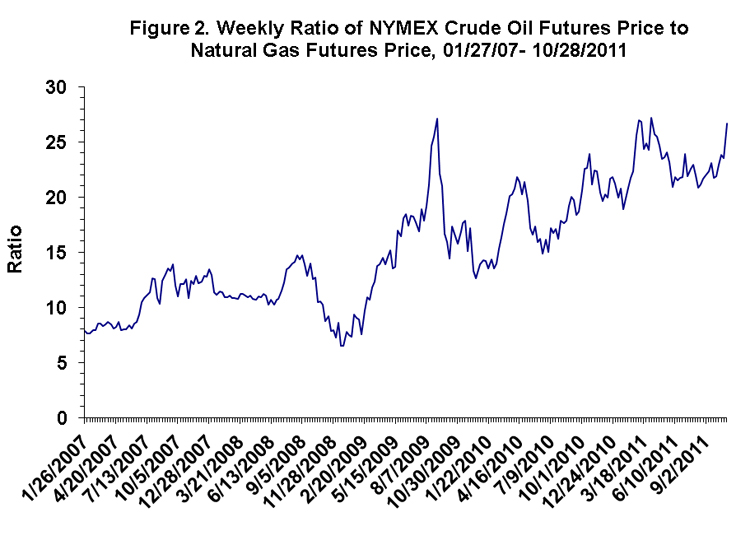 What all this means is that natural gas has suddenly become much cheaper in relative terms. There is also every indication that the production boom is only just beginning. While there are environmental concerns related to the new production techniques, this adds up to some of the best news about energy supplies in a long time.