Biotechnology varieties first became available for commercial use in the U.S. in 1996. By 2011, they accounted for 88%, 90%, and 94% of the acres planted to corn, upland cotton, and soybeans, respectively (U.S. Department of Agriculture (USDA), National Agricultural Statistics Service (NASS), Acreage, http://www.nass.usda.gov/Publications/index.asp, 6/30/11). For other crops, adoption of biotech varieties has been limited or nonexistent. Given that 15 years have passed, this article compares the trend in U.S. average yield since 1995 with the trend that existed from 1940 through 1995, a period that predates commercial biotech varieties. The year 1940 approximates when the average yield of most U.S. crops began increasing, due in part to traditional breeding methods.

Yields per harvested acre were obtained for corn, all cotton, soybeans, and 11 crops for which adoption of biotechnology varieties is limited or non-existent. Source of the data is USDA, NASS, http://www.nass.usda.gov/Data_and_Statistics/, 11/2011. Linear yield trends were estimated for 1940-1995 and 1996-2011 using regression analysis. The estimated yield trends are tested statistically to determine if they exceed zero at the 95% confidence level. Also, the 1996-2011 yield trend is compared against the upper value of the 95% confidence range around the pre-1996 trend. This test provides an indication of whether the trend is statistically higher since 1995.

For 13 of the 14 crops, the yield trend estimated for 1940-1995 exceeds zero with 95% statistical confidence. The exception is sugar cane. The time-trend R2 exceeds 0.78 for each of the 13 crops, implying that the time trend explains at least 78% of the variation in yield over time. This is a high degree of explanation for a single variable. For 1996-2011, 9 of the 14 yield trends exceed zero with 95% statistical confidence. A lower number is expected because the number of observation years is smaller. For the same reason, it is not surprising that R2 also is lower. 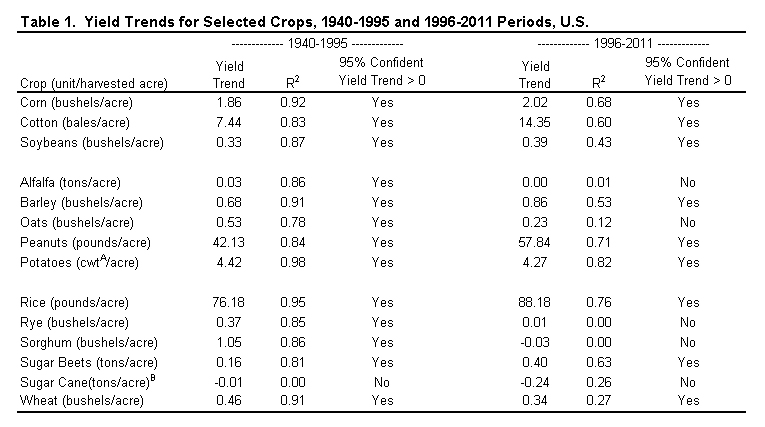 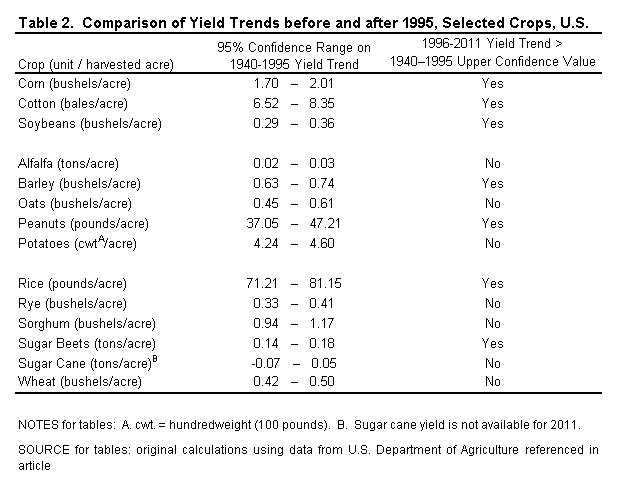 Over 10 years, the higher yield trend translates into a harvest yield that is 1.6 bushels, 0.6 bushels, and 69.1 pounds higher for corn, soybeans, and cotton, respectively. This addition to yield is 1.0%, 1.4%, and 7.9% of the highest harvest yield observed for corn, soybeans, and cotton, respectively. Thus, for corn and soybeans, the increase in yield trend since 1995 is not large.

These implications are subject to change with more years of data. Also, the analysis does not address what the yield trend would have been for corn, cotton, and soybeans if biotech varieties had not been introduced.?