The boom in ethanol production is a well-known and much-discussed phenomenon. Less understood is the profitability of all the ethanol plants built during the last decade. It is important to track the profitability of ethanol plants not only to assess investment performance in the industry but to also analyze short-term implications for the production of ethanol and use of corn as a feedstock.

In order to assess ethanol plant profitability over time, a model of a representative Iowa plant was developed. A model developed at Iowa State University by Don Hofstrand is used as a starting point. The final model incorporates these key assumptions:

This model is meant to be representative of an “average” ethanol plant constructed in the last five years. There is certainly substantial variation in capacity and production efficiency across the industry and this should be kept in mind when viewing profit estimates from the model. In addition, the model does not take into account the recent trend towards extraction of corn oil from DDGS as a way of increasing plant profitability.

To track plant profitability over time, weekly ethanol and DDGS prices at Iowa ethanol plants were collected starting in late January 2007. Natural gas costs are estimated based on monthly data as available and updated using natural gas futures prices. Figure 1 presents the (pre-tax) estimates of ethanol processing margins based on the prices and model assumptions. It is, of course, no surprise that margins have been enormously variable. Margins (net of variable and fixed costs) in early 2007 were very high but declined steadily into early 2009, reaching a low of -$0.63 per bushel of corn processed on March 13, 2009. Margins then began trending upward thereafter, reaching a peak of $2.45 per bushel of corn processed on November 23, 2011. Profitability then plummeted and has been negative much of the time since the recent peak. Over the entire time period, margins net of variable costs averaged $1.02 per bushel of corn processed and margins net of variable and fixed costs averaged $0.42 per bushel. Ethanol plants have operated in the black (vs. variable and fixed costs) about three-quarters of the time. 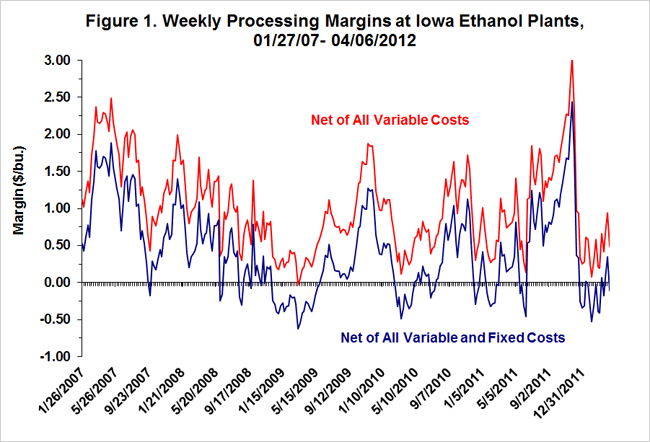 It is helpful to aggregate the profit margins over an annual horizon in order to see broader trends in estimated ethanol plant profitability and also compare to other investments. Figure 2 shows total annual profits net of variable and fixed costs for each year between 2007 and 2011. Profits are presented in terms of both total dollar returns to equity holders and percent return to equity. Profits were clearly highest in 2007 at $33 million. 2011 was next highest at $21 million. Lowest profits occurred in 2009 at just under $6 million. Averages for the five years were $16 million and 13 percent, respectively. The fact that no year showed a loss is rather remarkable in light of the deep economic recession of 2008-2009. By comparison, the average return in the stock market, as represented by the S&P 500, was only 2.4% for the same period. 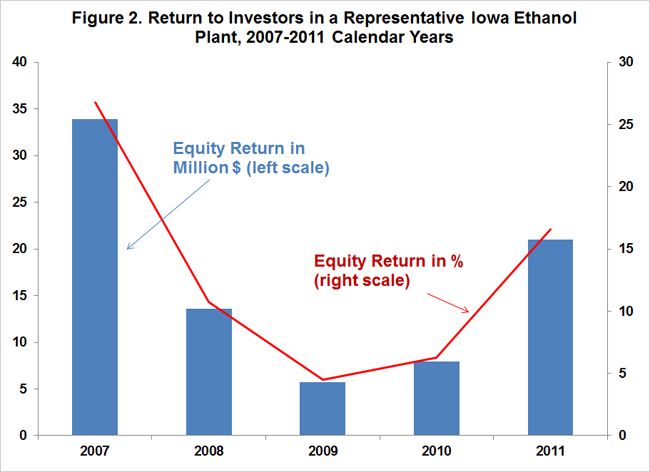 There is little doubt that investment in ethanol plants over the last five years has paid off handsomely in a very turbulent period for other investments. However, the outlook going forward may be much less favorable. Issues abound that may have a negative impact on profits, including the loss of the blenders tax credit, the 10% blend wall, implementation of E15, declining gasoline use in the U.S., declining ethanol exports, and possible changes to the Renewable Fuels Standard (RFS) mandates. The recent and extended stretch of losses or small profits may be more representative of future prospects.