Despite continued bank consolidation, small banks remain important lenders to agriculture. Approximately, 35% of the 5,566 commercial banks with farm production or loans secured by farm real estate have assets less than $100 million at year end 2011. These banks held 12% of all agricultural loans at commercial banks (Figure 1). In 2001, banks with assets less than $100 million held 29% of agricultural loans. 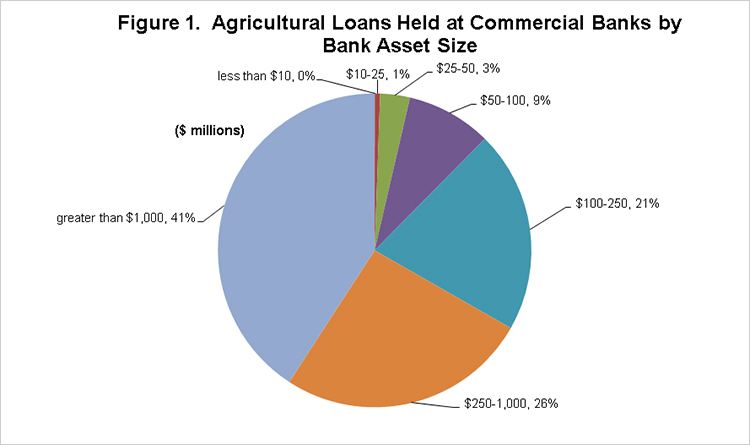 Two unique challenges facing small community banks are rising agricultural production costs and land prices. Although farm profitability and repayment capacity are strong, the size of production and farm real estate loans have increased substantially. Commercial banks have regulatory lending limits that are typically based on the amount of bank capital and the type of collateral. Legal lending limit calculations vary by state and by type of charter (national bank vs. state bank). Bank management may also place stricter limits on the maximum loan exposure to a specific borrower. Cash production costs and cash rent levels have doubled for many commodities the past decade. These increases can result in a small bank reaching its loan limit for a borrower simply due to an increase in operating costs. Small banks often seek loan participations with correspondent bank or another nonlocal banks to help finance borrowers that exceed lending limits.

To illustrate, table 2 shows the impact of increasing land values and operating costs on the farm size in which a lender can provide financing. For simplicity, the legal lending limit is approximated as 25% of tier 1 and tier 2 capital for a bank. The average legal lending limit of banks in each asset class at the end of 2011 is reported in table 2. For example, the average legal lending limit for banks with assets between $10 and $25 million is $563,000. In 2001, this loan size could finance a purchase of approximately 289 acres of central Illinois land at $3,000 per acre with a 35% down payment. In 2012, the same loan size could only finance 108 acres of land valued at $8,000 per acre. Similarly, nonland cash costs to grow corn were approximately $250 per acre in 2001. For simple illustration, assume a farm plants 100% corn and the bank finances all nonland cash costs. In 2001, an operating loan of $563,000 could finance 2,252 acres. In 2012, nonland costs to grow corn are estimated to exceed $450 per acre. The same size loan can now finance 1,251 acres. Moreover, if an additional $300 per acre of cash rent is added to the financing needs, only 751 acres could be financed.