There is some thought that the age of the farmer/producer is advancing rapidly and with the barriers to entry into the business of farming, that there are fewer and fewer ‘young’ farmers.

A quick look at a panel of data from the Illinois Farm Business Farm Management Association does support the advancing age level of the farmer. For ease of illustration, farmers were placed into one of three age groups. A ‘young’ group of those under age 50. A ‘middle’ group of those age 50 and under age 70. And, a ‘mature’ age group of those over age 70. See Table 1 below. 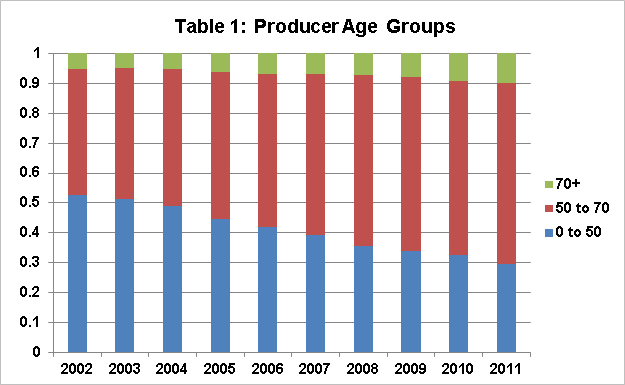 From Illinois FBFM data that includes over 2,000 farms in each of the ten years from 2002 to 2011, one can confirm that those in the business of farming are largely a group of older individuals at the present time. Over half in the 2011 dataset are in the middle (age 50 to 70) group. The average age of the farmer in the 2011 data is between 55 and 56.

While this may not be a representative sample of farmers in Illinois, the source data is very accurate. Members of the Illinois FBFM Association pay a fee to receive services which may create a bias in the data present in the ten-year period. This dataset does indicate that the percentage of young farmers is decreasing and that the percentage of mature farmers is increasing. It will be interesting to see how these percentages change as production agriculture moves forward in time.

The author would like to acknowledge that data used in this study comes from the local Farm Business Farm Management (FBFM) Associations across the State of Illinois. Without their cooperation, information as comprehensive and accurate as this would not be available for educational purposes. FBFM, which consists of 5,500 plus farmers and 60 professional field staff, is a not-for-profit organization available to all farm operators in Illinois. FBFM field staff provide on-farm counsel along with recordkeeping, farm financial management, business entity planning and income tax management. For more information, please contact the State FBFM Office located at the University of Illinois Department of Agricultural and Consumer Economics at 217-333-5511 or visit the FBFM website at www.fbfm.org.