In the March 15th post, the banking and borrowing provisions for Renewable Identification Numbers (RINs) were described, and an estimate of existing RIN stocks was provided along with a discussion of the potential implications for corn demand if the economics of ethanol blending were to change. Today, I am going to outline the lifespan of a RIN from production, to separation from the physical biofuel, to its eventual assignment for an obligated party’s mandate or expiration. Then, we’ll take a look at the prices for RINs created in 2010 to relate this maturity information to RIN valuation.

Again, RINs are the accounting and enforcement mechanism adopted by the EPA to ensure that obligated parties (fuel refiners) comply with the biofuel mandates outlined under the Renewable Fuel Standard (RFS). A RIN is a string of 38 digits which identify characteristics of the biofuel for which the RIN was created. The RIN contains information on 1) whether the RIN has been assigned or separated from the biofuel, 2) the year it was produced, 3) the company and the facility in which it was produced, 4) a batch number assigned by the producer, 5) codes indicated the biofuel type (i.e. corn-ethanol, biodiesel, cellulosic, etc.) and it’s equivalence value, and 6) starting and ending block numbers which indicate how many gallons are associated with the RIN. For more information, McPhail, Westcott, and Lutman provide an excellent description in Table 1 of their ERS publication. It is important to understand that a RIN is simply a string of numbers and letters, and (non-fraudulent) RINs can only be created by the production of biofuel.

While the flowchart provided in figure 1 may seem complicated already, it can actually become even more complex since, after separation, RINs can be even further broken down into multiple RINs by breaking up the block numbers. For example, a RIN tied to 100,000 gallons could be broken down into two 50,000 gallon RINs with one being immediately applied to the mandate and the other being traded or banked. 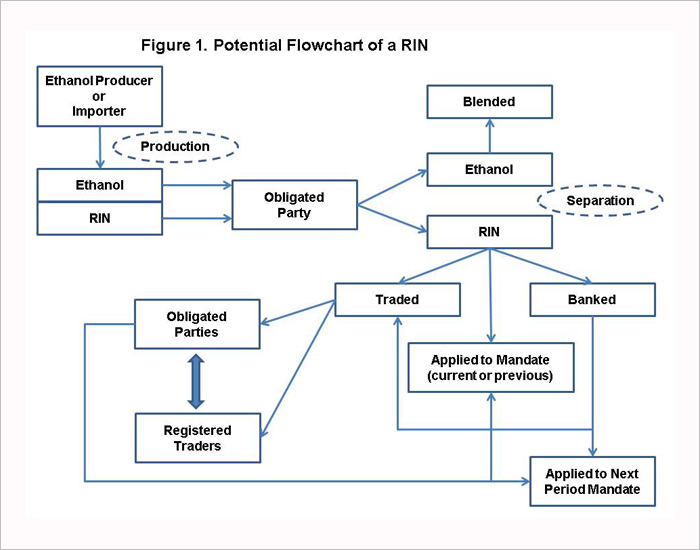 The maturity of a RIN is directly related to the year in which it was produced. This is illustrated in figure 2 below. A RIN generated by the production of biofuel in year t could be applied toward an obligated party’s mandate for year t-1, year t, or in year t+1. For example, a RIN associated with ethanol produced in 2010 could be applied to an obligated party’s 2009 mandate (had they borrowed in 2009), their 2010 mandate, or held for application towards the 2011 mandate (through use of the banking provision). In fact, obligated parties could even wait to apply the 2010 RIN to the 2011 mandate until the early part of 2012 since the compliance period for any given year spills into the first few months of the following year (similar to how many of us face the April 15 deadline to file income taxes for the previous year). Thus, the maturity of a RIN depends on when it was produced. The lifetime of a RIN produced early in the year might be nearly a full year longer than one produced later in that year.

So what implications does the maturity of a RIN have on its valuation over its lifespan? Well, the current value of a RIN can be broken down into what is commonly referred to as its “core value” and its “option value” or the speculative component. The core value is or has been driven by factors related to blending economics such as ethanol (or, in general, energy) prices, feedstock prices, government incentives such as the tax credit, and various transaction costs associated with mandate compliance. The option value of a RIN is based on the uncertainty surrounding factors affecting the core values in the future. For example, just because conditions today are such that the blending of conventional ethanol is profitable (i.e. the mandate has been non-binding) does not guarantee that blending will continue to be profitable in the future. Thus, holding a RIN, and the right to apply that RIN towards the mandate in the future, holds some value – the option value component. Over time, as the RIN nears its expiration, the option value should converge to zero similar to how the value of an option on commodity futures will converge to the difference between the futures and strike prices as expiration approaches.

Figure 3 illustrates this for RINs generated by ethanol production in 2010. The information in figure 3 is based on daily RIN prices for conventional ethanol collected from weekly reports from the Oil Price Information Service (OPIS). RIN prices are reported for both current and previous RINs, which refers to when the RIN was generated. Current RINs in 2010 refer to RINs associated with ethanol produced in 2010. Data on previous RINs reported in 2011 also refers to RINs produced in 2010. 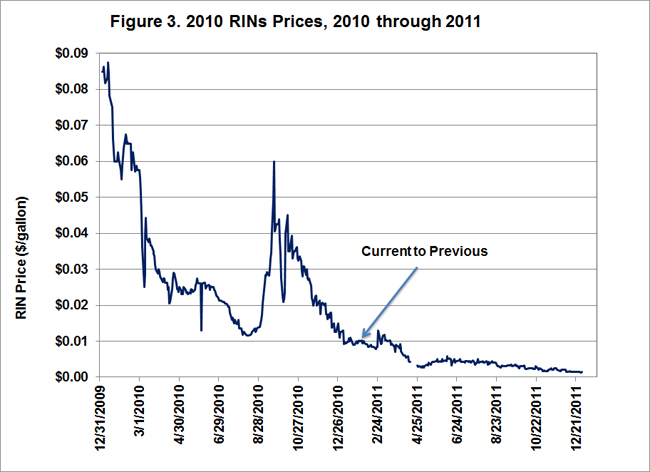 As figure 3 shows, the value of the 2010 RINs declined as their expiration date at the end of 2011 approached. Given that blending margins have been at levels where the mandate is non-binding, the prices for 2010 RINs were largely based on their option valuation. It is also worth noting a seasonal pattern in RIN prices which has been observed in the historical data for conventional ethanol. RIN prices tend to be relatively high in the early part of the year when their optional value would be greatest. Values then tend to decline for current year RINs until the last few months of the year when prices increase, due possibly to increased trading activity as obligated parties work to finalize mandate compliance for the current period. As current year RINs transition to previous year RINs (i.e. 2010 RINs prices beginning in 2011), values again tend to fall as the option value declines towards expiration.